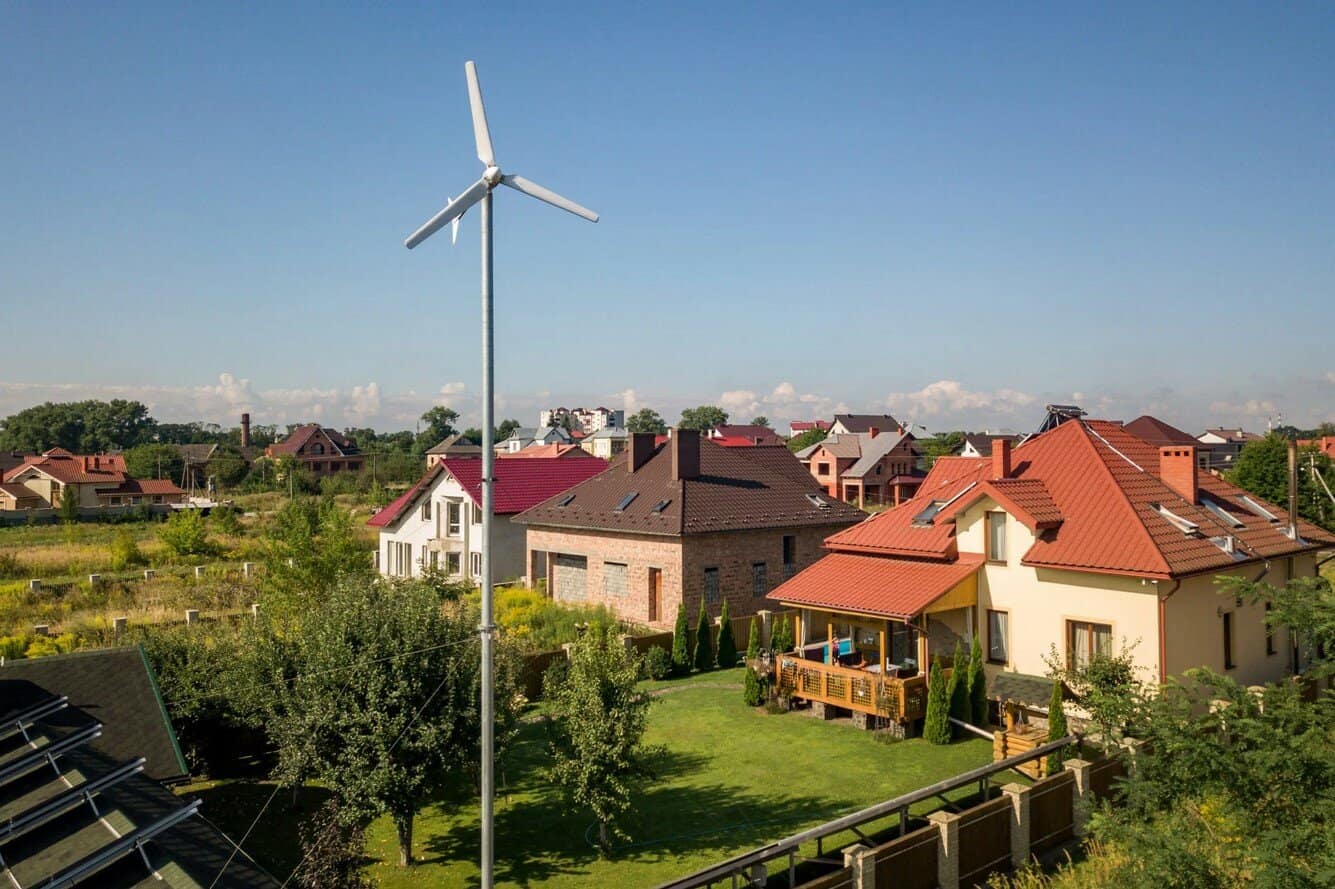 Windmills harvesting wind power have been around for a long time, and many people are considering this power-generating option for their homestead. However, before you dive into it, there are a few things you need to know, like, for example, if your property is suited for hosting a wind turbine.

Wind turbines are no recent innovation

Since the 1930s, wind-electric generators have found their way into rural areas where power lines were lacking. These low-voltage machines were mainly used to charge batteries needed to power low-voltage direct current home appliances. Most wind turbines were used to power water pumps.

Today, with the expansion of the renewable energy trend, various manufacturers began producing wind turbines for both grid-dependable systems and off-grid battery systems and applications. These modern wind turbines use high-efficiency generators or alternators and a set of highly refined blades designed for maximum efficiency.

You can buy a small rooftop wind-electric device, or you can have one of the newly designed vertical axis wind turbines and have it installed on your property. While new designs are currently being developed, most folks will go with the “classical” horizontal axis wind turbine. 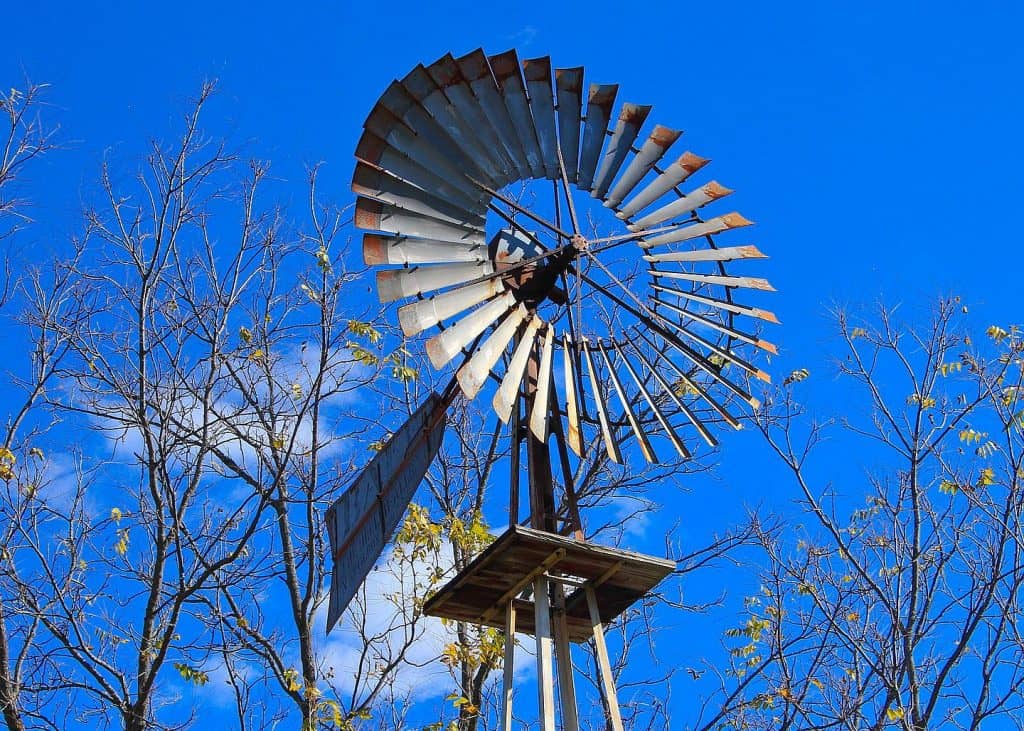 Wind turbines capture the wind’s energy in order to generate electricity. The wind rotates a blade propeller system attached to a generator that produces electricity as long as those blades rotate. The highly efficient horizontal axis wind turbines are mounted on towers that are 100 feet or taller. At that height, the wind is faster and stronger, and the turbine provides maximum output.

Many locations in this country have the potential for capturing wind energy, but the wind resource varies widely from one location to another with season and time of the day. Wind energy is affected by the elevation, exposure, terrain, and obstructions such as trees or buildings.

It’s critical to assess your site for wind power potential before buying and installing a wind turbine. You will need to determine how much energy that wind turbine will produce and research which turbine model you need for our properties based on its specifications.

You will probably have a few options to choose from, and you need to make a comparison regarding the cost, durability, quality, sound level, and production output at your site. Not only that, but you also have to understand what’s covered by the manufacturer’s warranty since this is a good indicator that the company trusts the products it sells.

To estimate the amount of energy you can capture from moving air, you need to make some calculations involving the wind speed, wind collector area (or swept area), and air density. To calculate the wind energy available at your site, you can use an Anemometer.

Figuring out the swept area

This equation will help you establish how much more you can gain by increasing the rotor diameter. For example, let’s say you will increase the diameter by 20 percent, then you will have:  3.14 x 62= 113 square feet, which is an increase of 44% of the swept area.

The bottom line is that the greater the swept area, the more energy the wind turbine will produce using the same wind resource. 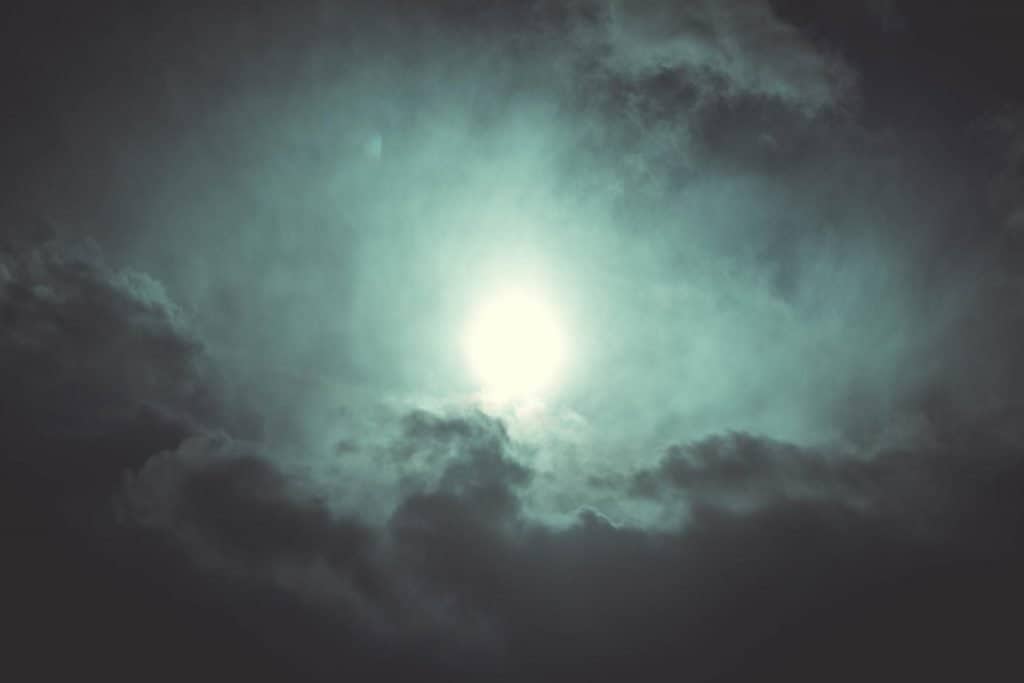 Aid density is expressed in pounds per cubic foot, and it decreases with increasing altitude, temperature, and humidity. Wind turbine manufacturers will rate the output of their wind turbines at a standard temperature of 59° F and sea level elevation.

While air density shouldn’t be of great concern since it has only a small effect on available energy compared to wind speed, it’s worth mentioning that there’s more energy available in a climate where cold, dry air flows at low altitude than in an environment where warm, humid air flows at higher altitude. It is estimated that the change in air density is about 3% for every 1,000 feet in elevation change.

Wind speed is expressed in miles per hour (mph), and it’s an important factor to consider since power increases cubically with velocity. Small changes in wind speed yield dramatic changes in energy produced even if the actual power output of a wind turbine is produced by the swept area and generator capacity.

Many wind turbines won’t even spin unless the wind speed is between 7 and 10 mph, which is the needed speed to overcome the inertia of the blades. This is also known as the cutting speed, and by taking it into account, you should know that there’s no point (no economic sense) in capturing winds below 8-9 mph.

Also, it is worth mentioning that winds above 30mp may damage certain wind turbines, and that’s why many wind machines have various mechanisms designed to limit speed and protect the turbines in high winds.

This is important to know because it will help you stay clear of manufacturers claiming that their products can work in winds below 6 mph or above 30mph. It may work above 30 mph, but only for a limited time until the machine tears itself apart.

How to calculate wind energy

The energy (watt-hours) produced by a wind turbine is a formula of four elements:

This is the equation expressing the power available in the wind: 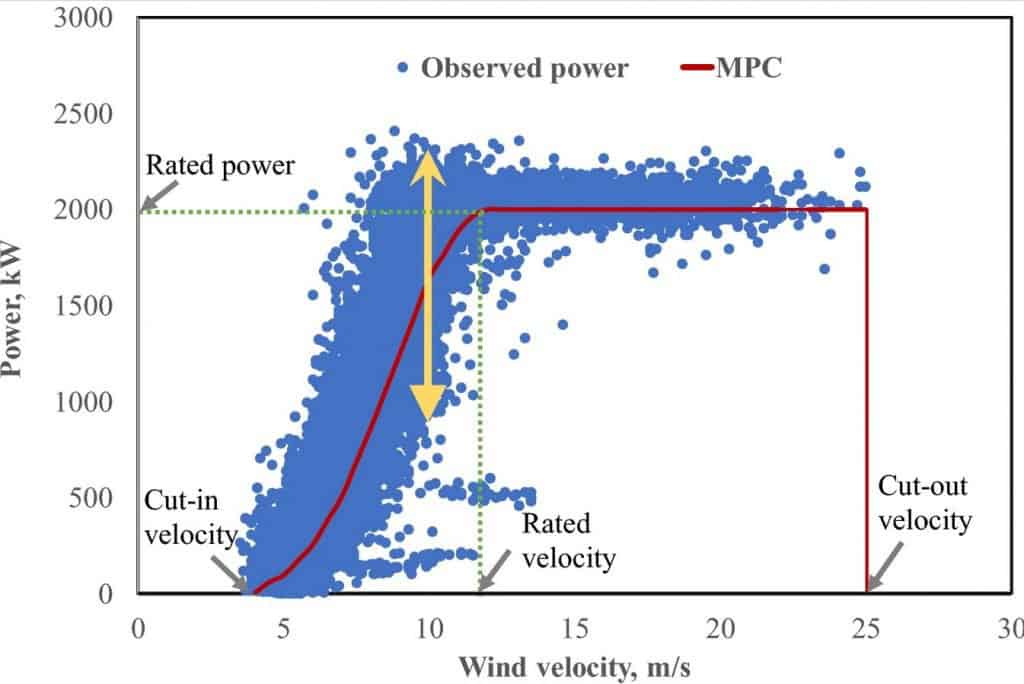 Every wind turbine manufacturer will publish power curves showing the power output of their products (in watts) at various wind speeds.

The power curve helps you determine when and how the wind turbine will protect itself in high winds. Let’s say you notice that the power curve of a turbine you intend to purchase drops suddenly at 27 mph, then it means that the protection mechanisms for over-speed are triggered at 27mphs, and the rotor will furl or turn itself out of the wind and stops producing.

Even more useful than the power curve is the energy curve since it will help you estimate how useful (valuable) is the wind turbine at your location. This factor indicates how many kilowatt-hours are produced over a certain time period, based on the average wind speed at your location.

Most folks will judge a wind turbine by its maximum power output, but they fail to realize that this measurement is taken at a specific wind speed.

This arbitrary factor makes manufacturers rate the output of their products using various numbers (24 mph, 26 mph, or perhaps 28 mph), and this can be rather confusing and misleading.

This is because most folks will consider the 28mph turbine to be better than the others without knowing that the rated power output isn’t an indication of the energy that the wind turbine delivers.

Instead of being concerned with the maximum power rating (watts), it’s better to figure out how much energy (kilowatt-hours) a wind turbine will deliver at your location with the available wind conditions.

For example, increasing the aboveground height of your wind turbine will expose it to faster and more consistent winds. Increasing the swept area increases the potential power output, as you’ve seen in the calculation we did before.

And to help you, even more, you should know that depending on the electricity cost in your area, a minimum average annual wind speed of 10 to 12 mph is recommended to make economic sense.

Gathering data to help with your calculations 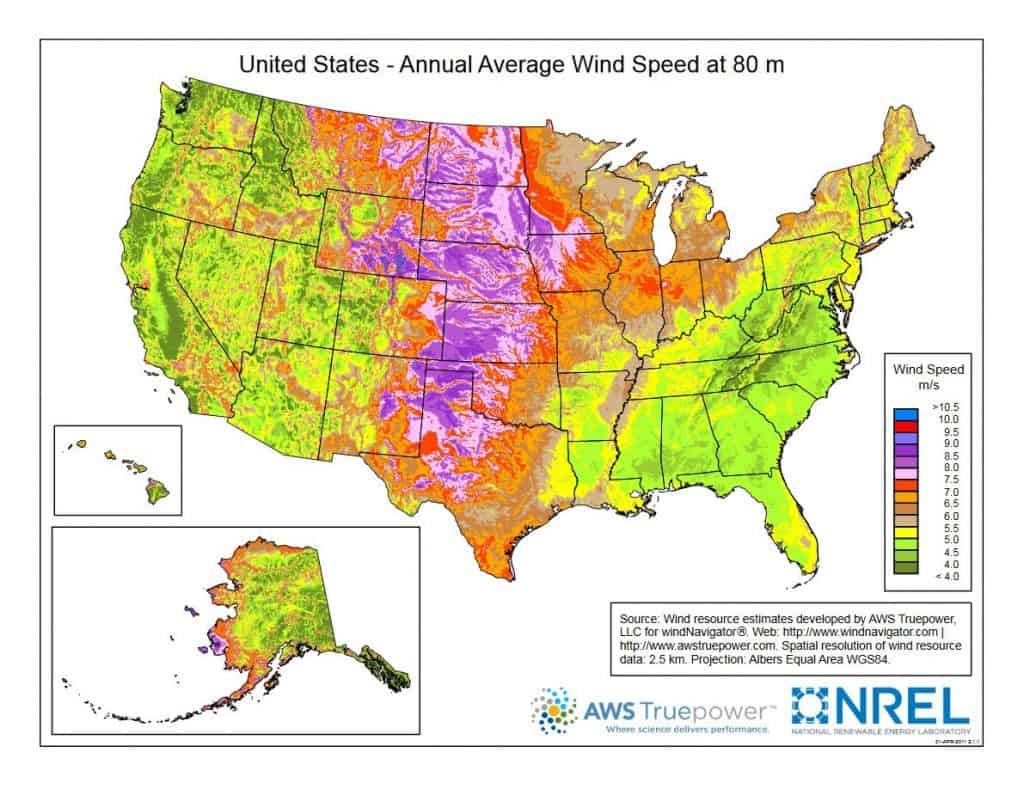 Before you start to look for a site on your property to install a wind turbine and contact wind turbine manufacturers, you should make sure you have all the data proving you’re making the right choice. You should obtain long-term data ( at least one or two years’ worth) for your location, and there are various ways you can do so.

There are various websites that can provide long-term records of wind speeds in various locations in the United States. These websites provide various historical data and wind maps, and some may even help you select a site and a wind turbine. Here are some to start with:

The National Centers for Environmental Information

While these resources are a good start to obtaining concrete data for the available wind resources, it’s also recommended to make an accurate assessment of your site.

An assessment should start by listing obstructions such as buildings and trees that may create wind turbulences. These turbulences are hard on wind turbines and will create a lot of stress on bearings and the tower without a power output to show for it. This will help you figure out where to install your turbine so that it is well away from wind obstructions.

Another thing you can do to make a proper assessment of your site is to use a recording anemometer to measure wind resources in your area. Such a device will measure wind speed and the duration of various wind speeds, recording and storing the data electronically. It will allow you to establish a wind regime for your site and estimate long-term energy production.

For accurate measurement is recommended to install the anemometer at the same height where you plan to install the wind turbine and let it run for 12 months to have complete data logging.

If you want to install a wind turbine on your property, this article will help you figure out what you need to do in order to establish if a wind turbine is indeed useful at your location.

Before buying a wind turbine, you should not only make sure you understand the various characteristics to differentiate these wind-electric systems but also how to establish if there’s a good wind resource at your proposed site.

Recommended resources for preppers and off-gridders:

How to build an underground shelter for less than $500

A new solar power system takes the market by storm

How to make more than 100 long-term survival foods