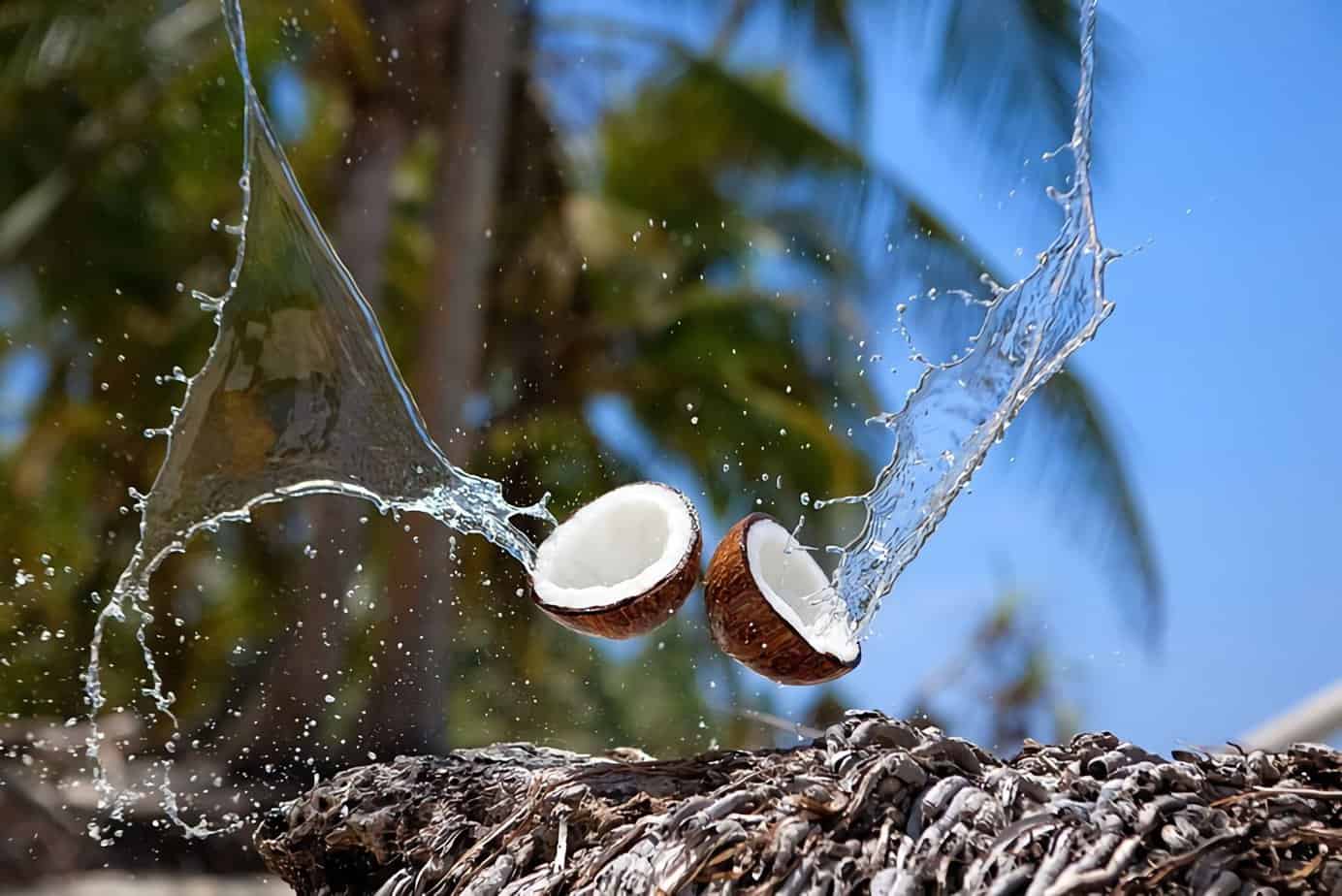 Because water is the most important requirement for sustaining life and normal bodily function, it is important that we identify the varying resources from which it can be obtained.

Removing the obvious from the equation, we are left with plants. Plants require water to grow, and some of them actually store it in their systems in a way we can tap into.

Before beginning to look at water-yielding plants, an obvious warning must be given. While a good many plant species can be important resources for water, caution must be taken to ensure the plant is not poisonous.

Only drink water from “safe” plants. I live by the rule, “if in doubt, leave it out.” Better to go thirsty for a while than die from poisoning, or at the very least a bad case of stomach ache.

And no matter how thirsty you may feel, NEVER drink a liquid that appears milky or sticky. It is almost certainly toxic.

Depending on the plant you are sourcing water from, how you extract it could be straightforward or require some processing. If water does not freely run after the plant has been cut, as is the case with vines, pummel or squeeze the plant to extract it. 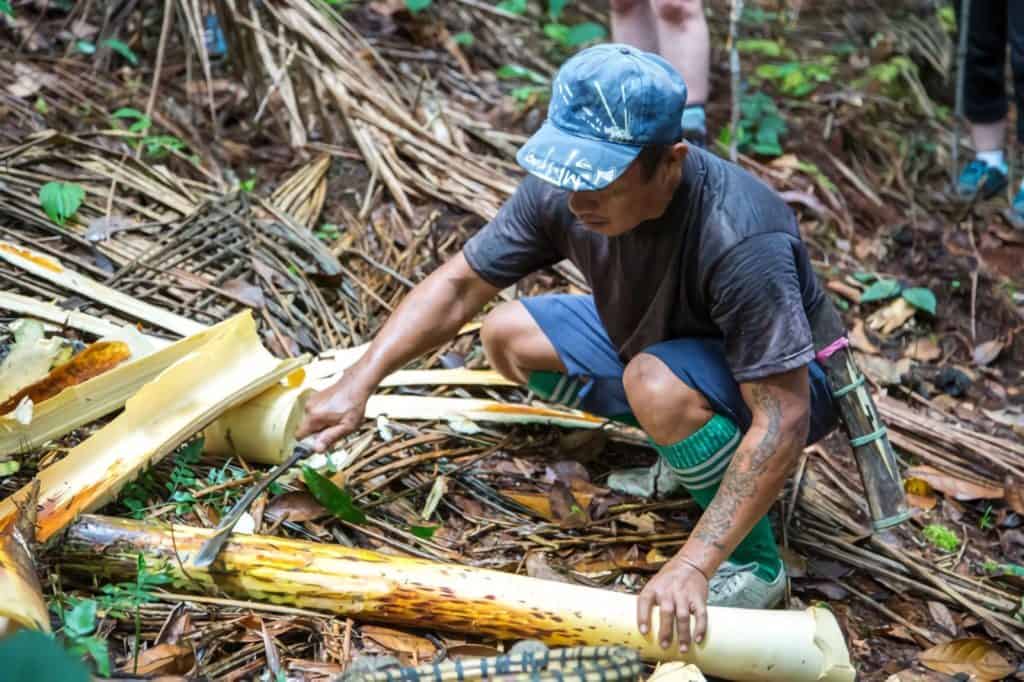 Providing the plant is a safe species, most fleshy plants can have water extracted this way. Following the rains, when the ground is parched and puddles dried up, don’t forget water can still be found in the forks of branches where there is a depression.

There is an ingenious method to extract water from a banana tree. First, cut the tree down, about three feet off the ground. Scoop out all the insides of the stump until you are left with a hollow “dish.”

This forms a reservoir, which will be continually filled as the root system draws water from the soil. At first, the water has a very bitter taste. Although drinkable, it is better discarded. After two or three fillings, the water becomes more palatable.

You should be able to get nearly a week’s worth of water from one stump. Covering it with a leaf will protect it from contamination by insects and bird mess.

A lot of palms, such as sugar palm and rattan, can be viable sources of good quality drinking water. To extract it, bend over the flowering stalk and slice off the tip. Hold the stalk over a cup, or drip the water directly into the mouth.

Alternatively, pummel the stalk into a pulp and then squeeze the pulp through a cloth to extract the water.

When in season, this acacia bears small, creamy-white round flowers that our primate friends relish. Water can be extracted from the tree by cutting into the taproot. This can penetrate deep into the ground, drawing water from great depths. This is one of the reasons why this tree is so drought resilient.

In regions where they occur, the baobab tree is a valuable source of water. Even small trees can store vast quantities in their trunk, which can be tapped into in times of need. The root system is also a vast resource of water.

Only ever exploit the resources of baobab trees in a real survival situation. They are a protected species and can be hundreds, if not thousands of years old.

I know someone who carries a couple of coconuts as a “backup” source of water when he ventures off the beaten track. That’s quite a good idea, and I’d never really thought about doing that. Of course, not only do you have a source of water, but food as well.

If you visit a region where coconuts occur, make use of their water source. Only drink from the mature brown coconuts, and not when they are green, as the water in those contains an oil that acts like a laxative, and too much of it will see you spending a lot of time squatting behind a tree. That said, if you are suffering from constipation, green coconut water can provide a natural remedy. 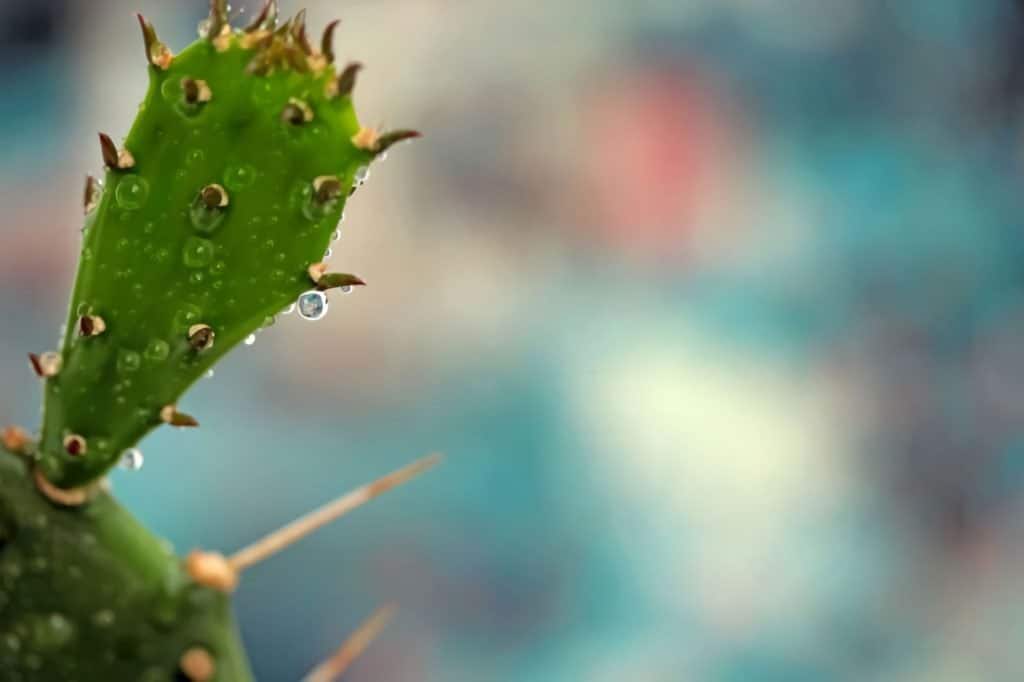 I covered the benefits of cacti before, but just to reiterate. You cannot simply lop a cactus in half and expect gallons of fresh drinking water to be available. Many cacti contain a milky white latex-like sap, which is high in oxalic acid. If drunk, it can cause severe stomach upsets, even blistering to the lips and lining of the mouth.

The safest cacti to obtain water from are the barrel cacti, of which the fishhook barrel cactus is possibly the best. A good-sized one can yield several liters of safe drinkable water. The pads of the prickly pear, an invasive species found just about the world over, can also be mulched up to yield a fair amount of water.

This is an extremely versatile plant, which can be used for shelter construction, cooking, starting a fire, eating, and sourcing water. The best time to obtain water is when the bamboo is green. Brown canes are no longer growing, so seldom hold any.

The cane can be bent over, sliced off from the bottom, and then held over a cup, which will catch the slow dribbling water. Alternatively, cut off each individual section.

Providing the water is clear, it can be drunk straight away. If it shows signs of discoloration or smells, it must be purified ed. Be extremely careful when cutting bamboo, as it has the habit of splintering.

Whatever tool you cut it with must be sharp and a cut made in a single blow. A folding saw may be a wiser option.

These are like straws sucking water from the ground, transporting it to their very summits. Water can be taken from the vine by cutting it at the highest point you can reach and then the lowest point.

Don’t cut the lowest point first, as the water will shoot up the vine. Collect the water in a container, or allow it to drip directly into your mouth. Take care with vines, as some can be poisonous. If the liquid appears milky, do not drink it.

What you see above ground can be tiny compared to what lays beneath the soil when it comes to some plants. The root system of some can be huge. Full of nutrients and water, they serve as storage vessels for the growing plant. If we know where to look, we can also tap into these.

Once dug up, the root is grated into a pulp. Placed in some sort of cloth, the water is then wrung from the pulp. It is safe to drink without any further treatment.

The only downside with root procurement is the effort taken to dig them up. Sweat loss may exceed the water value gained. The only way this can be reduced is to dig them up during the early morning or late afternoon when the sun is at its weakest.

In recent times aloe has become a fashionable drink, with many reported health benefits, although a few research papers have found it to cause cancer in laboratory animals. If push comes to shove, in a survival situation, scraping the gel from aloe leaves could be used for rehydration, as it has a very high water content.

Do make sure, though, that the inner gel is clear and free from any green or yellow residue, as this is toxic. As beneficial as aloe is in some health situations, there are many side effects to ingesting neat aloe juice, not least severe stomach cramps, laxative effect, and diarrhea.

Most of the drinks you can buy are diluted with water, so drinking large quantities of neat gel over an extended period of time is probably not a good idea. But it is there as a survival hydration source. 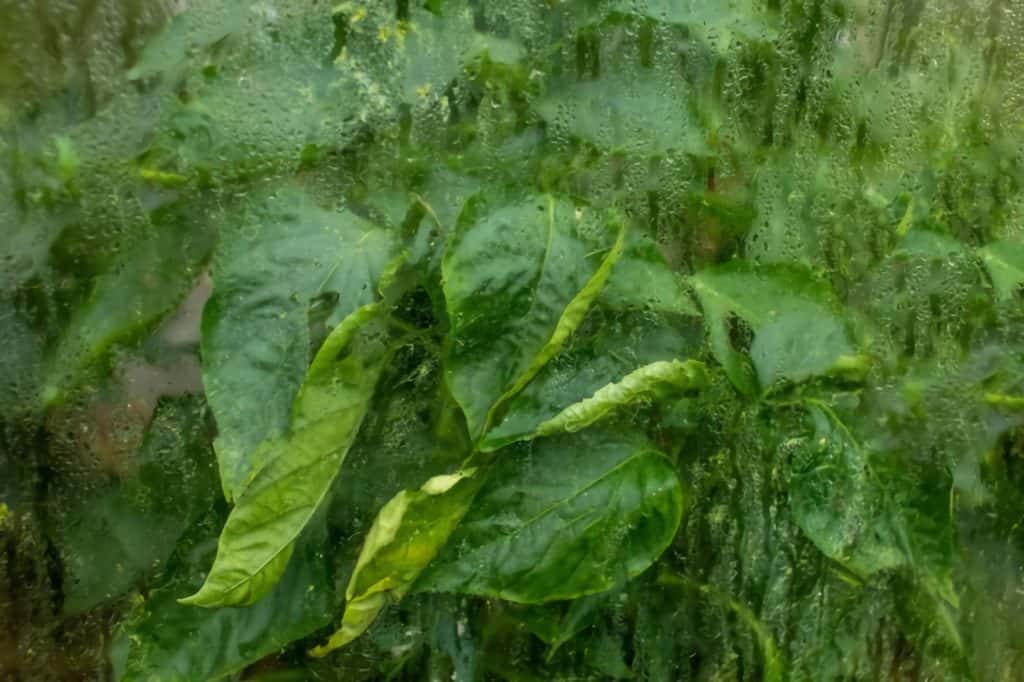 The movement of water through a plant and its eventual evaporation into the atmosphere is called transpiration. With the aid of a simple plastic bag, we can harvest this water source.

Find a plastic bag, ideally a clear one, so as to allow light to pass through, and the leaves to continue functioning, although any type of bag will do in a survival situation.

Place the bag over a leafy branch, and tie the end tightly. Keep the opening of the bag higher than the lowest corner. Evaporation from the leaves will condense on the inside of the bag, eventually pooling at the bag’s lowest point.

The bag needs to be in place for at least 24 hours for the process to work. I have read some accounts on the internet of gathering a cupful of water in a few hours using this technique. That is simply not the case, and I doubt whether the authors have even tried the method.

The sun needs to heat the air inside the bag so that during the night, when the temperature drops, water will condense from the leaves onto the surface of the bag. I have used this method on several occasions, and the best I achieved was three-quarters of a cup of water.

If a suitable tree/bush is not available, a similar approach can be achieved by placing a gathering of freshly cut vegetation inside a plastic bag: you will require an awful lot of it to gain any significant amount of water – a handful won’t do.

Do not allow the leaves to touch the bag, and keep them off the bottom of the bag with a layer of non-absorbent stones: if they touch the bag, they will reabsorb the water they are giving up. Place the bag at a slight angle so that condensed water will gather at the lowest point.

Water can be harvested from any plant using either of these methods. If several different plants are available, choose the one with the bushier branch and larger leaves. The larger the leaf surface, the more moisture the leaf will give up.

One of the benefits of evaporation extraction is that it is not an energy expenditure way of water collecting. You simply tie a bag over a branch and allow the plant to do the rest. There’s no digging involved. And in most cases, the water is pure enough to drink without any form of treatment.

We all know the value plants can give us as a food source. But many that are “fleshy” or compartmentalized, as is the case with bamboo, can be a lifesaving source of water.

In areas where such plants grow, but water is absent, spend your time extracting it from the surrounding foliage rather than expending valuable time and energy trying to find a viable source of it, such as a river or pond.

This article was submitted by Robert Peters.