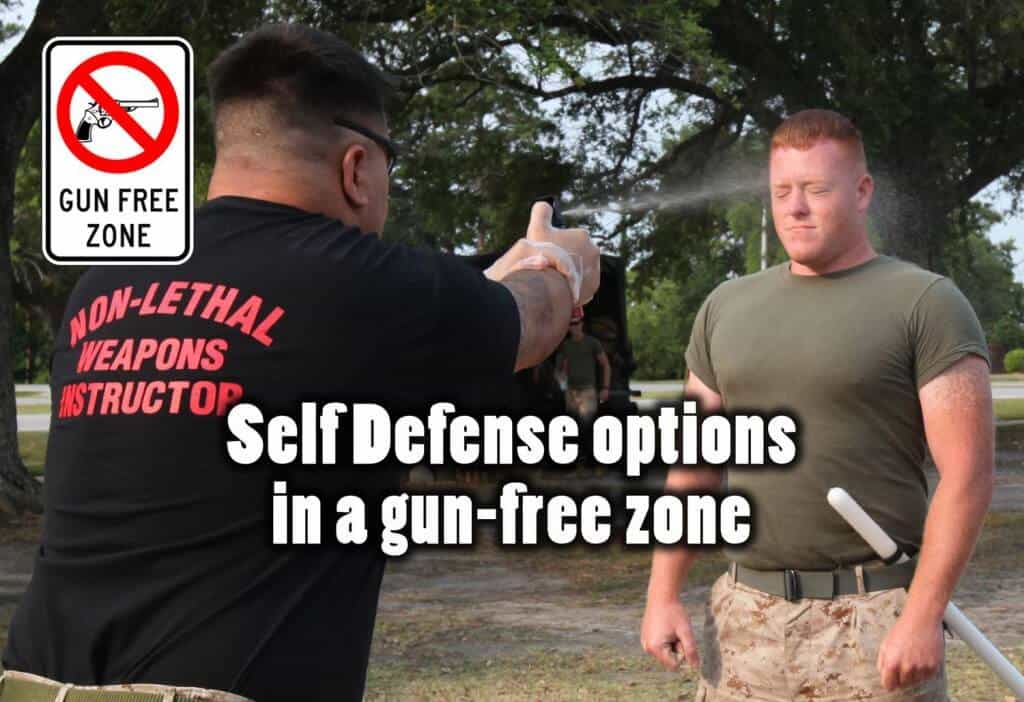 The way things are going, it seems that daily carry will become a memory of our rights. A memory of when we were allowed to carry a handgun. We will live to see the day when our guns will be taken away from us and we will have to find other means to protect our families. Self-defense in a gun-free zone is not a picnic and we should learn in advance about the options we have.

There are states that restrict daily carry and since the state laws vary greatly, we should look into what other less-lethal self-defense options we have. A handgun will be out of the picture and you need to find a good replacement for your everyday carry arsenal.

They won’t suspect it, it’s just a pen…

Contents hide
1 They won’t suspect it, it’s just a pen…
1.1 Suggested reading: Vital head points to exploit in self-defense
1.2 A knife for the wicked
1.2.1 Related reading: The shape of the blade is crucial when choosing a survival knife
1.3 The pepper power, stopping the enemy with a burn
1.3.1 Suggested reading: How to make mace spray using cayenne pepper
1.3.2 Taser takedowns, self-defense with a shock
1.4 Here are just a few guidelines on how to go about your EDC:
1.4.1 Workplace
1.4.2 Daily stops
1.4.3 City and state parks
1.4.4 Public venues
1.4.5 Weapon-free sites
1.4.5.1 Be aware and stay safe!

I’ve talked with many preppers and survivalists about EDC and to my surprise, I’ve noticed that there are more and more people deciding to carry a tactical pen. This is one item that is being overlooked and if made of the rig

ht material it can be a very effective self-defense tool. The design must include both the function of the pen (a daily writing tool) and a potential stabbing weapon. The material of the pen must be hard enough to be used in a fight yet light enough to be carried every day without effort.

Most tactical pens are made from titanium and it’s really a good choice if you think about it. Titanium is stronger than steel and aluminum, it’s more corrosion resistant and more resilient.

The market for tactical pens has grown over the last few years. There are now a lot of models and brands you can choose from. You just have to keep in mind the big picture, the pen needs to look like a normal pen while retaining a dangerous capacity. One of the pens I’ve used for my EDC is the NiteCore NTP10 tactical self-defense pen.

It’s compact and portable and it has a tungsten steel tip that can be used as a window breaker. I’ve even given it as a gift this Christmas to some of my prepper friends. There are many tactical pens models you can choose from and it’s all up to your budget and personal liking.

A knife for the wicked

If you want to include a knife in your EDC, your local laws will be the deciding factor in what to choose. The size and style of the knife you’re able to carry every day is influenced by the laws from your state. Chances a

re you won’t be able to walk around with a fixed blade. This is why a folder is recommended for all EDCs. Folding knives are smaller, discrete and they can be tucked in your pocket without attracting unwanted attention.

There are many foldable knives available on the market and having such items in your EDC will make sure you don’t get caught empty-handed in a nasty situation.

For my EDC, I’ve decided to go with the Browning Black Label Integrity G-10 folding knife. It has a Tano point blade and is designed to handle a variety of tasks. It is a knife developed following the input from Special Ops, Military, and Law Enforcement knife experts.

Related reading: The shape of the blade is crucial when choosing a survival knife

The pepper power, stopping the enemy with a burn

The mace spray was one of the first chemical defense sprays to develop high popularity among those who are not comfortable holding a handgun. Defense sprays are popular even today and they are a good self-defense alternative if a handgun is illegal in your state.

Defense sprays are formulated from various types of agents, ranging from chemical tear gas to naturally occurring substances like oleoresin capsicum (a substance extracted from chili peppers). A pepper spray is a good self-defense weapon because if used correctly, it can incapacitate your attacker and give you enough time to run away or apply the next blow.

Upon contact, it will make the eyes slam shut and cause inflammation of the respiratory tract. The attacker will start to cough, gag and it will cause an excess mucous production. Not to mention the extreme burning pain around the eyes, mouth, and nose.

There are many pepper spray manufacturers and a lot of models you can choose from. However, when choosing a non-lethal self-defense weapon for my wife, I’ve stopped at the Pepper Blaster pistol. This device is built to function similar to a pistol and provides a very effective launching platform. It delivers a nasty punch at a high velocity, hitting 112 mph at 13 feet.

The best part about the pistol is that it doesn’t use the common aerosol. It uses a disabling gel that is three times more effective than commercial sprays and is capable of disabling the attacker for up to 45 minutes. The gel has a four-year shelf life and it’s leak-proof. This is a small, lightweight and effective self-defense weapon that can deliver two separate blasts. I can honestly say it’s the best 40 bucks I’ve ever spent.

Taser takedowns, self-defense with a shock

Taser weapons have been around for years and they are a good alternative to a handgun when the law is against you. These self-defense devices are designed to deliver an electrical punch that interferes with volunta ry control of muscles. As a result, your attacker will be incapacitated and you will have enough time to plan your next actions and calling the authorities. With the advances in technology, the Taser guns have been improved as well and right now, the most used ones are the stun guns.

These small guns are able to fire two individual probes that stick to the assailant and they will do the job just right. For civilian use, Taser International has developed the Teaser C2 model. This stun gun allows you to stun an attacker as far as 15 feet away, thus giving you time and room to escape. This is a self-defense weapon that can be found in many EDCs. It is usually at the top of the list.

Before you chose a self-defense weapon for your everyday carry you must do your homework. Find out what the maximum level of weapons is permitted where you live and where you work. Where you carry your EDC dictates the rules you have to follow.

Here are just a few guidelines on how to go about your EDC:

Your workplace is a location where your EDC may come in handy. However, your employer is the one who establishes what is allowed on the premises. Not every employer allows EDC for handguns and pocket knives so it is best if you stick with your tactical pen.

Everyday stops like a grocery store or restaurant have clear policies regarding weapons on their propriety. Law dictates that shops must post a sign announcing their policy. Since this is rarely the case, there are those locations that do not openly restrict the presence of knives and pepper sprays so it is all up to you. Worst case scenario, you will be asked to leave.

All cities and states have firm regulations against firearms in their parks. However, there is rarely any posted limitation on other EDC items. You should be ok if you carry non-lethal self-defense Concert arenas, theaters, and stadiums have fairly strict bans on weapons on site. This includes all the items listed above and there are reports of even tactical pens being denied entry.

These places have security on site that performs searches so don’t try to sneak any item inside. It’s better if you leave your EDC in the car.

There are many places where weapons of any kind are not allowed. It is up to you to make sure you know these places in advance before going there with your EDC. Schools, federal buildings, airplanes, and trains are restrictive facilities with a weapon-free zone policy. It is your responsibility to know where you are going and what you are carrying with you. If something happens you will be held accountable if you bring your EDC there.

Choosing a non-lethal self-defense weapon is not easy as one may think and you need to do your homework. What you carry with you should be influenced by the laws governing the area you live in. Some of your coworkers might not like the thought of you carrying a pocket knife and it will affect your work relationships. At the same time, the thought of being caught empty-handed during a crisis is not easy to bear and you should be able to protect yourself.

When it comes to self-defense weapons for your EDC, always choose what’s best for you while following the local rules as best as you can.

Be aware and stay safe!

Article was written by By David Andrew Brown for Prepper’s Will.

5 thoughts on “Self Defense In A Gun-free Zone”