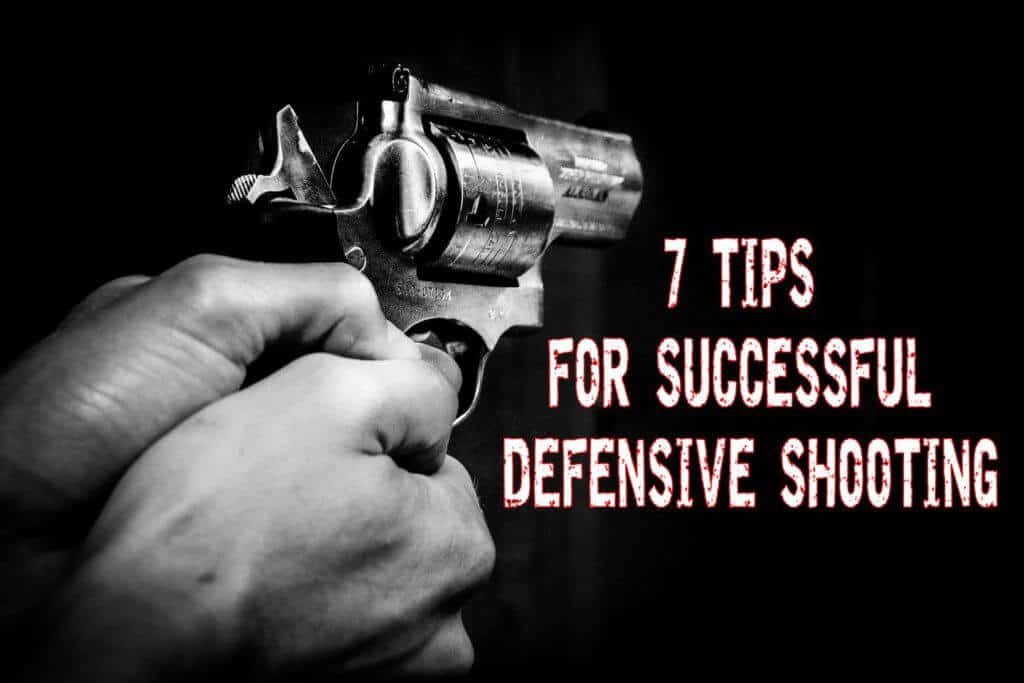 Training for armed defense requires a lot of time and effort. If you are not part of the military you may never achieve an expert level of training. However, there are some defensive shooting tips that should work for everyone.

If you ever find yourself in a situation where defensive shooting is your last resort, you should make good use of the following suggestions. Situational awareness and proper gun control are your main friends when it comes to gun fighting. If you are the competitive type, like most preppers are, your goal is to get even better at defensive shooting.

It takes a great deal of discipline and practice to master defensive shooting. There are people training and doing drills daily just to be able to operate under pressure. They learn how to read the environment around them and stay one step ahead. Defensive shooting doesn’t stop when you buy a gun for self-defense and do a few drills. It is quite a complex subject and you need to train hard to stay alive.

Contents hide
1 7 Tips for mastering defensive shooting:
1.1 Lower your center of gravity
1.1.1 Related article: Three places to hide a gun
1.2 Learn to visualize a threat
1.3 Pay attention to the “two arm’s reach”
1.4 Learn one-handed ready positions
1.5 Avoid looking at your gun while reloading
1.5.1 As a rule of thumb, keep an eye on:
1.6 You have to be fit to survive
1.7 Buying two or more carry guns is not recommended
1.7.1 Related article: 5 guns every prepper should own
1.8 My advice
1.9 Other Useful Resources:

This is one of the first things I’ve learned when I started training for defensive shooting. I was quite surprised to see the number of people practicing defense drills in an upright position. Fighting while standing up straight is just silly and no one should do it. We have a natural instinct of lowering our center of gravity when we are in danger. We do it even for our athletic activities. You’ve probably seen people lowering down when they get startled.

Defensive shooting is nothing more than an athletic act. A proper training should rely on our natural tendency to bend forward at the waist and bend our knees. When you are in a defensive shooting situation, you most certainly won’t be in your most comfortable stance. People should figure out how good of a shooter they are in all sorts of positions. Start by training in a natural position and advance to positions that make you feel uncomfortable.

When training for defensive shooting, most people aren’t looking past the cardboard or steel targets. They see them as practicing targets and nothing more. To give yourself the proper context for the shooting you are about to do, try to visualize a real threat. Try to see a potential threat behind those targets. When standing in the ready position, give yourself a reason for being in that position. Think about what you would do if someone tries to enter your home. How would you act in the ready position if someone located a few feet away is waving a knife at you? As a general rule of defensive shooting, nobody should be able to get their hands on you or your weapon. If that happens, they are much more dangerous for you and the overall scenario can end tragically. If you have a gun in your hand, the last thing you want is for someone to be able to get in contact with you or touch your gun. When defending yourself, you should keep the proper distance between you and your attacker.

In defensive shooting, this distance is called ‘two arm’s reach’ or TAR. Some instructors argue that the distance me be further based on the length of tools or reaction time. However, it is just a matter of details.

One rule of defensive shooting states that one should stay outside of TAR when confronting an imminent threat. Even more, you should keep yourself and the muzzle of your gun outside of reach when doing a recon drill. This is especially important when the defensive shooting scenario involves approaching corners or other places where someone could be hiding.

Sometimes, you will have to get within TAR or deal with an unknown situation. There could be a potential threat that catches you by surprise and you won’t be ready for it. When that happens, be sure to transition to a one handed ready position. This involves keeping your gun close to your body and using your other hand to delay the threat. You should use your free hand to shield yourself or fend off a gun grab attempt.

It is better to have your arm slashed by a knife and be able to shoot the attacker, than to have your gun taken from you. When you are on the range, practice shooting from one-handed retention positions. Defensive shooting requires for you to be able to quickly transition from a one-handed ready position to a two-handed extended shooting position.

This is one of the mistakes I kept on making while training for defensive shooting. It took a lot of effort and determination from my part to get rid of this bad habit. When you are practicing with a defensive tool and mastering its use, you should never look at it. To put it simple, during an emergency situation you shouldn’t look at the tool you are using. You should keep your eyes on the target and your surroundings.

In a gun fight, there are many things you should keep your eyes on. Defensive shooting requires for you to be able and see the elements from your environment.

As a rule of thumb, keep an eye on:

As you can see, you have many details to pay attention to during a defensive shooting scenario. When it comes to reloading your guns, there shouldn’t be any unknowns. Learn to reload confidently without looking at your gun. The magazine release is always in the same place and the same goes for the magazine well.

If you don’t look at your gun while reloading, you could save precious seconds in a real defensive shooting scenario. Train to always keep your eyes on the threat. Even a split second can allow for a numbers of things to change around you.

No matter how you look at things, if you want to defend yourself and help others during a defensive shooting scenario, you should be fit. You should be able to make the transition from a resting position to a ready position without breaking a sweat. During one of my defense shooting classes I learned that you should get your gun from your secure spot in less than 30 seconds during a home invasion. This means that you should be able to quickly reach your gun safe spot from the place in your home where you spend most of your time.

Even more, every teen and adult should be able to carry or drag another person during a defensive shooting scenario. During a home invasion, you might need to move family members from one spot in the house to another. If dragging someone up the stairs is not doable for you, you should get in shape. Gun fighting, just like any other type of fighting is an athletic effort. Prepare your body to be able and fight.

Unless you are a gun collector, you shouldn’t have more than two self-defense carry guns. More than once I’ve seen my friends getting a gun and afterwards looking to buy something new, completely different.

Personally, I think that if you found an EDC pistol that is a perfect fit, you should stick with it. If you want to get a second gun, you should stick to one type of operating style. It makes much more sense buying two of the exact same model, than two different firearms. Think of it this way, everything related to your firearm will be consistent and interchangeable. You won’t have to spend additional money on ammunition, sights, tools, holsters and anything else that implies owning a new firearm.

Related article: 5 guns every prepper should own

If ‘you have to’ get another gun, buy two of the same type, but in different sizes. I own one for every day carry and another one for keeping in the home or work place. My combination is a Glock 17 and a Glock 26.