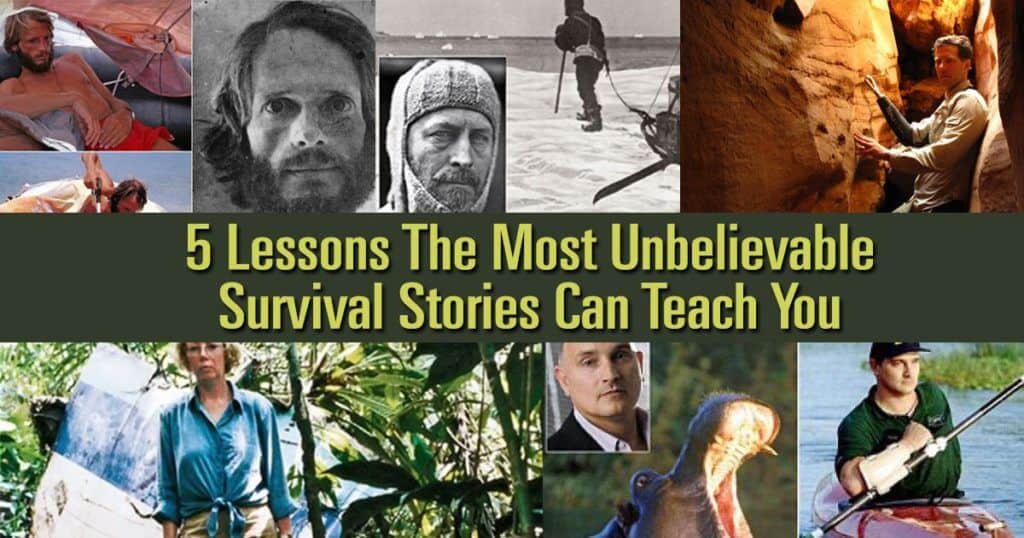 People enjoy telling stories to their friends, family, or colleagues. The digital era enabled us to exchange anecdotes and life events with other surfers or followers and the Internet is now crowded with personal stories all over the globe. It seems like everyone has something more all less interesting to share with the world these days.

It is not strange to realize that certain individuals experienced some truly incredible situations in their lifetime having in mind that there are more than 7 billion people on Earth. What is strange is to learn how they managed to go through critical situations and send us all an impressive message of resilience and willpower. In this article, we will discuss the 5 most unbelievable survival stories and the lessons that we all should learn from their protagonists.

Contents hide
1 1. STEVEN CALLAHAN’S OCEAN DRIFTS
1.1 What did we learn from Steven Callahan?
2 2. PAUL TEMPLER AND THE RAGING HIPPO
2.1 Now, what we learned from Paul Templer?
2.2 3. DOUGLAS MAWSON’S ANTARCTIC ADVENTURE
2.3 So, do you get the moral of this hellish adventure?
3 4. JULIANE KOEPCKE: BAD LUCK NEVER TRAVELS ALONE
3.1 Things to learn from Juliane’s survival experience
4 5. ARON RALSTON’S SELF-AMPUTATION
4.1 What did we learn from Aron Ralston?
4.2 Conclusion we can draw from these lessons
4.2.1 Other Useful Resources:

Steven Callahan is a writer and sailor who had spent almost two and a half months drifting across the Atlantic Ocean in a liferaft. He started his journey in Rhode Island and went to Europe over Bermuda. His self-made 6.5metersloop was damaged in a storm near the Spanish coast and he somehow ended up in the inflatable life raft.

There, he found a piece of cushion, a spear gun, and a sleeping bag, along with scarce supplies of food and solar stills for producing drinking water. He did, however, found an old sea survival manual, which helped him to survive with what he had. During his 3,300 km voyage, Steven learned how to catch fish and birds and also to collect and purify rainwater. He established a daily routine, knowing that he’ll hardly ever catch the attention of not more than a few sailboats that crossed his ocean path.

Steven said that he even created two roles for himself – a Captain and a Sailor – to help him make it through the day all alone on the high seas. The rescue came 76 days later, when he saw the lights on the island of Marie Galante, near Guadeloupe. Local fishermen noticed his life raft and picked him up close to the shore.

What did we learn from Steven Callahan?

He taught us never to stop believing and losing hope. Spending 76 days and nights alone on the open sea must be a terrifying experience, but it’s not something a man cannot withstand. Good luck is just around the corner – you just have to be patient and fight for it.

2. PAUL TEMPLER AND THE RAGING HIPPO

Paul Templer was just a regular 27-year old Zambezi river tourist guide when he experienced the story of his lifetime. He knew the river very well and did not expect anything unusual that afternoon. For him, it was just another day at the office.

However, this was not what the raging hippo had in mind. The animal crashed into a boat and kicked everyone out of it. Our protagonist somehow managed to gather four clients around the cluster of rocks but his colleague Evan still had a super-aggressive hippo to deal with. Paul tried to reach Evan but all of a sudden hippo turned to Paul and swallowed his entire upper body.

After several seconds of mind-boggling confusion, Paul realized that he was trapped inside the giant hippo’s mouth. Of course, he got seriously injured, with his chest and arms bleeding heavily, but he managed to get away when the hippo opened his mouth. Paul ended up with 40 puncture wounds and without his left arm – but he is still rowing fearlessly down the Zambezi river and showing tourists a local landscape.

Now, what we learned from Paul Templer?

Paul told us that it’s crucial to help our teammates, even if it means putting yourself in great danger. He showed us that we need to be brave, regardless of the circumstances. And most of all, he proved that after all this bad luck and trauma, a man has to move on with his life. Peter Blumberg, a psychologist at Aussie Writings, says “Don’t let the battles lost to put you down – let it give you additional encouragement to become stronger than you’ve ever been”.

Douglas Mawson’s Antarctic adventure represents one of the most renowned cases of survival in the history of mankind. He was a geologist who participated in the longest Antarctic man-hauling sled journey of 122 days in 1909. However, his greatest survival adventure occurred three years later.

Mawson and his two fellow colleagues decided to sled through Antarctica in the quest for specimens to support their scientific research. However, they suffered a couple of major disasters: one man fell in the crevasse taking most of the supplies with him, while the other companion died of hunger and exhaustion soon after. Douglas was all alone somewhere in Antarctica.

Despite the odds, Douglas managed to return to the Main Base at Commonwealth Bay. He survived sub-zero temperatures, frostbite, hunger, and crevasses. He even saved the specimens they collected. After 30 days of the unimaginably extreme conditions, he came back alive.

So, do you get the moral of this hellish adventure?

It tells us that some survival stories are self-induced. Douglas was eager to serve the science but also to question the limits of his body and his mind. And he discovered that a man is almost impenetrable if he truly believes himself.

A sole survivor of a plane crash must be feeling both lucky and misfortunate, no? Juliane Koepcke experienced such feelings when she survived a freefall over the rainforest in Peru in 1971. Her mother and 90 other people died that day, so Juliane had to find her way back home all alone.

She was devastated by the death of all those passengers, but she had little time left for moaning. Namely, Juliane had to get out of the rainforest and go back to civilization. Her only other option was to die alone somewhere in the wilderness.

She found a small creek and decided to follow the water because people often build huts near water. She kept walking until she found a real river. After 10 days of desperate wanderings, Juliane finally bumped into a few rainforest natives who knew how to take her out of there. She never panicked but stayed calm instead, trying to find help and heal the wounds she got in the plane crash.

cMost women (and most man, too) feel scared when they find themselves stuck alone somewhere in a local park in the middle of a big city. Now try to imagine how Juliane must have felt in the middle of nowhere among all those snakes, bugs, and scary sounds of the Peruvian jungle. But she remained calm and reasonable, following the one path she knew would bring her out. She showed us that we need to stay rational, even in the most difficult situations.

If a sore throat hurts or you feel scared of going to the dentist, just imagine how painful it must be to amputate your own hand. This is exactly what Aron Ralston did when he found himself trapped in Bluejohn Canyon, Utah, for six days. It doesn’t always have to come in the form of self-amputation, but sometimes we just have to give up something very important to prevent further damage. It’s like how you have to avoid consuming too many sweets to avoid getting a tooth decay. However, do consider making an appointment with the Dentist in Newmarket to avoid extreme damage to your set of teeth

15 years ago, Aron was climbing the rocks of Bluejohn Canyon when a large boulder moved and crushed his right arm. He was trying desperately to take the hand out but with no success. He hoped someone would go by and find him there, but his hopes were gone after six days of agony.

During this time, Aron dehydrated in hunger, exhaustion, and hypothermia. Pain in his right arm was the only thing that kept him from falling asleep. After almost a week of suffering, he made a decision we could so far see in only horror movies. Namely, Aron decided to amputate his right hand with a climbing multi-tool. He sacrificed his arm to save his life and became one of the biggest survival story legends of all time.

What did we learn from Aron Ralston?

Sometimes we have to make a big sacrifice in order to protect or save an even bigger cause. It doesn’t always have to come in the form of self-amputation, but sometimes we just have to give up something very important to prevent further damage. We can only hope that our decisions won’t be as painful as Aron’s.

Conclusion we can draw from these lessons

You can hear all sorts of stories anywhere around you – from love affairs and sports events all the way to war terrors and family issues. However, it seems like survival stories have the biggest power to make us all wonder about the true meaning of life and who we really want to become as persons.

In this article, we showed you the 5 most unbelievable survival stories and the lessons that we all should learn from their protagonists.We hope that you liked our choices and experienced the same sort of emotions as we did while writing about them. These heroes definitely made us reconsider our ‘immense’ everyday problems. How about you?

This article was written by Olivia Ryan for Prepper’s Will Olivia’s biggest passion is writing. That is why she is a journalist by profession and explorer by her convictions.

She does different types of writing as well as different independent journalistic researches. You can find her on Facebook and Twitter.

The easiest solution to produce food during a water crisis