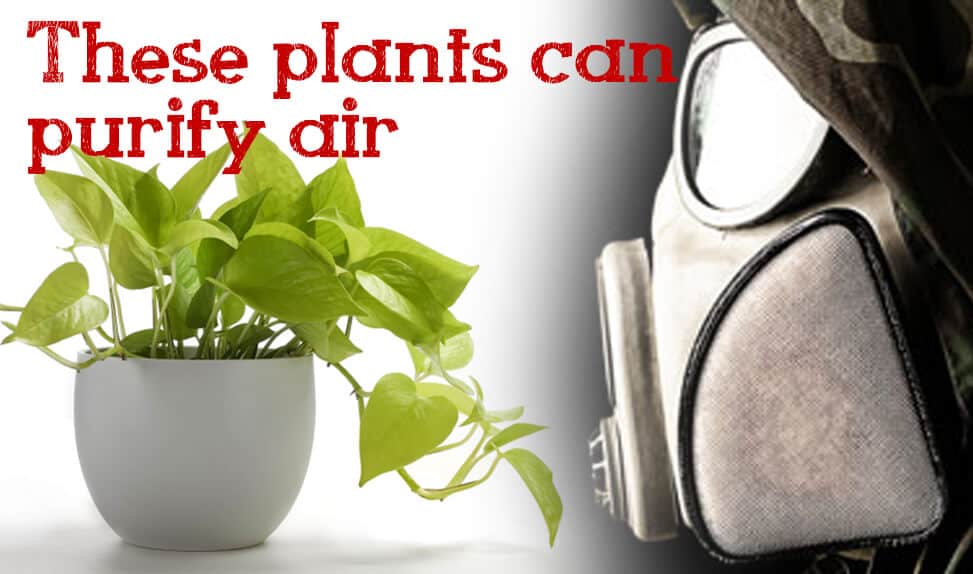 The list goes on. Preppers know how to make use of these plants and every day, they learn more about new types of plants. About how can these plants help them thrive in an uncertain world. The air purifying survival plants from this article are an ideal addition to the living area of every prepper as they have an important role: they purify the air!

Plants are not just decorative and we’ve learned in school that they are producing the oxygen we need to survive. However, that’s not all they do. Some air purifying survival plants clean the air in our homes and act as anti-pollutants. Houseplants can reduce components of indoor air pollution, even volatile organic compounds such as benzene, formaldehyde, toluene, and xylene. These air purifying survival plants also reduce airborne microbes and increase humidity.

Researchers recommend having at least 15 average-sized air purifying survival plants in a house or an apartment of 1800 square feet to have good air quality and be in good health. This is a plant native to the tropical regions of the Americas and southeastern Asia, being also known as Spath. It is considered a general air cleanser of many pollutants. According to NASA scientists, it’s very effective at filtering contaminants such as formaldehyde, benzene, and trichloroethylene. It cleans best at one plant per 353 cubic feet.

The Peace Lily is a plant mildly toxic to humans and animals when ingested, so if you have pets or small children make sure it is placed out of reach. Intoxication symptoms are skin irritation, nausea, a burning sensation in the mouth and difficulty swallowing.

These air purifying survival plants will not require a lot of your attention and will survive even if you neglect them. All they need is shade and water once a week when the soil is dry. Pace lily is considered a plant ideal for lazy people or for the ones that have a busy schedule. If you visited Mexico or Hawaii, chances are you’ve already seen this plant in its natural environment or even as a houseplant. It is a poisonous plant and it’s known to cause skin irritation to yard workers. You should also avoid ingesting it as it causes vomiting and nausea.

It is a good air purifier that helps you get rid of formaldehyde. Tests showed that over a period of 24 hours it decreased the formaldehyde levels by 67 percent. The arrowhead plant is recommended for smokers or people who do a lot of home cooking.

Overall, it’s quite easy to take care of these air purifying survival plants, if you keep in mind the following: no direct sunlight, a steady temperature between 60 °F and 75 °F, allow drying between waterings and provide moisture by placing the plant pot on a tray filled with pebbles and water. This plant is native to French Polynesia and has been naturalized in tropical and subtropical forests worldwide. It is considered an invasive species and it can be found in Hawaii covering the forest floors, preventing the growth of other plants.

Devil’s Ivy is often used in decorative displays in shopping centers, offices, and other public locations largely because it requires little care and is also attractively leafy. It is very efficient at removing indoor pollutants such as formaldehyde, xylene, and benzene. As a houseplant it can reach a height of 66 feet or more, given suitable support.

Devil’s Ivy is sometimes used in aquariums, placed on top of the aquarium and allowed to grow roots in the water. This is beneficial to the plant and the aquarium as it absorbs many nitrates and uses them for growth.

This is also a plant that you can neglect as it requires little of you. It just needs a place with no direct sunlight and watering only when the soil feels dry. The spider plant is native to tropical and southern Africa, but it can also be found in Western Australia where it has been highly naturalized. This is the second best air purifier when it comes to decreasing the levels of formaldehyde, registering an 86 percent decrease of this pollutant over 24 hours. It is a popular and commonly used house plant.

Spider plants are easy to grow, being able to thrive in a wide range of conditions. These air purifying survival plants will tolerate temperatures down to 35 °F but grow best at temperatures between 65 °F and 90 °F. These air purifying survival plants can be damaged by high fluoride or boron levels and it’s recommended watering it using rainwater. This plant came from Asia and Australia and it’s the official tree of Bangkok. It is a common houseplant in the US and it’s mostly known as Benjamin’s fig. When grown indoors, it can grow too large for its situation.

Many plants need drastic pruning or replacing, but it has been shown to decrease the levels of trichloroethylene and formaldehyde. It grows edible fruits, although it’s not grown for its fruits. It’s much more appreciated for its looks and air cleaning proprieties.

The roots of the Ficus Benjamina grow rapidly and can prove destructive for gardens, sidewalks, patios, and driveways.

These air purifying survival plants can handle partial shade, although it loves bright sunlight. It should be watered with moderation and the pot should assure good drainage. It is a plant that doesn’t like being moved or transplanted and it can die rather easily if exposed to changing conditions. The majority of the Dracaena species are native to Africa, with a few in southern Asia and one in tropical Central America. This is a versatile air cleaning plant that is well known for removing not only benzene and formaldehyde from the air but also xylene and toluene.

The leaves and bark are mixed with parts of a number of other native survival plants and mixed into herbal teas.

Because it requires minimal care, Red-edged dracaena is very popular in offices where the constant heat and light suits its growing requirements. It requires a minimum temperature of 59 °F and is more tolerant than most plants of dry soil and irregular watering. Also known as European Ivy, this robust plant can be found through most of Europe and western Asia. A rampant, clinging evergreen vine, it is a familiar sight in gardens, vast spaces, on house walls, tree trunks and in wild areas across its native habitat.

It is labeled as an invasive species in a number of areas where it has been introduced. This plant efficiently filters formaldehyde aerosols and fecal particles from the air, being a plant preferred by pet owners. It is also a poisonous plant, so ingesting it should be avoided.

English Ivy requires partial shade to bright light, but no direct sunlight. Among the air purifying survival plants, it is the most robust one and it grows so well and easily that is considered a weed in some countries. It can spread rapidly if not kept under control. The Gerbera is a well-known decorative plant native to South America, Africa, and Asia. It is also used as cut flowers and it’s the fifth most used in the world. Even though it’s used as cut flowers, it has air filtering properties that are less known.

It is most suitable for removing benzene (which is a well-known carcinogen) and trichloroethylene from the air. It should be grown in the garden since besides providing a variety of colors it is also attractive to bees, butterflies, and birds.

Gerbera prefers bright light and well-drained soil. The soil should be kept moist but not soaked. It is a plant that blooms repeatedly, from mid-spring until fall. Philodendron species can be found in many diverse habitats in the tropical Americas and the West Indies. Most occur in humid tropical forests, but can also be found in swamps and on river banks, roadsides, and rock outcrops.

It’s a plant that prefers partial shade and well-drained soil. It can grow very large with wide leaves so make sure you have enough space for it. This flowering plant is native to Asia and northeastern Europe, where it’s a preferred as a garden or household plant. In China and Europe, there are countless horticultural varieties and cultivars.

This is an amazing plant that has many uses: the yellow or white flowers of Chrysanthemum are used in some parts of Asia to make a sweet drink.

It is a natural source of insecticide and it has medicinal use. It’s also very good at filtering a variety of air-polluting compounds from the air, especially formaldehyde, benzene, and trichloroethylene.

These air purifying survival plants are pretentious and taking care of them is not as easy as you might think. Chrysanthemum likes a bright, but indirect sunlight and the watering is recommended to be done with warm rainwater. Allow the soil to dry in between waterings and make sure the plant has good air circulation.