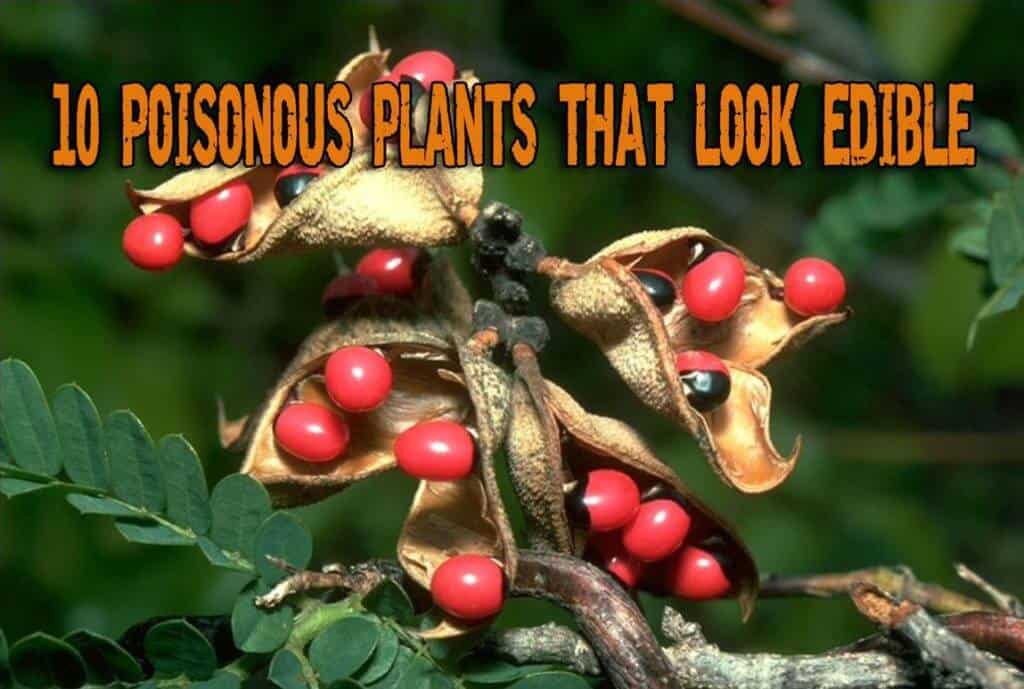 Do not be deceived by looks alone. Not all poisonous plants look bad; some have attractive visual effects. Just because a plant smells and looks good that doesn’t mean that it is fit for consumption – the reverse also holds true.

What survival skills do you have? Would you last a day in the wilderness with these skills? People don’t pay much attention to such thoughts nor are they eager to learn all about edible and poisonous plants.

Granted that getting lost while hiking or camping is not an everyday occurrence, having knowledge of which plants are safe to consume will help you. You also need to worry about growing these plants in your garden.

You may find them lurking in your garden and decide to keep them because they are beautiful, but you should weed them out immediately. They may cause harm to your kids and pets as they love eating new things.

Below is a list of 10 poisonous plants that you need to look out for as they could kill you:

Native Americans refer to them as “suicide bush!” The bush has an attractive blooming effect, and one may be tempted to try out if starving. It is among the top poisonous, edible plants known to man.

Though the poison gets concentrated in the leaves, the entire plant is toxic to both humans and animals if consumed. The nectar produces the toxic substance called grayanotoxin. The effects include vomiting, nausea, and overall weakness. As much as it’s pretty, it is equally dangerous.

Why is this among the most poisonous plants in North America? Well, its flowers bear almost identical similarities to Queen Anne’s lace flowers or parsnip. It is these similarities that cause so many poisoning incidents. It contains a cicutoxin which has the potential to cause central nervous system damage.

Some of the symptoms of hemlock poisoning include seizures, stomach pain, general weakness, diarrhea, dizziness, vomiting, tremors, and at times death. Like any poisonous plants symptoms, seizures are what you should look out for as they can cause muscle breakdown, kidney failure, and swelling in the brain leading to death without prompt treatment.

You may be forgiven for mistaking them for heirloom tomatoes especially if you’re looking for a quick bite. But they are top on the list of plants that are poisonous to humans. They produce attractive fruits that bear the same resemblance.

In reality, horsenettle is not your typical tomato. It contains a poisonous substance called alkaloid solanine. Once consumed, it may result in a significant amount of abdominal pain and circulatory and respiratory issues. So, if you come across it in the forest, keep off from regardless of how plump and juicy it appears.

Related article: Noxious and Toxic Plants To Avoid When Exploring The Wilderness – Part 1

Also referred to as white baneberry and offers superb visual effects. Do not fall for it just because it looks edible; it’s also on the list of poisonous wild plants. The plant has vast amounts of poisons that can lead to immediate death once eaten.

The whole plant is poisonous, the berries being the most lethal as they contain a high concentration of the toxin. The victims of these plants are mostly children because the berries resemble doll’s eyes and they taste sweet. The cardiogenic toxin kills you by slowing the heart muscle until the heart stops beating.

Who knew that cherry and cyanide could appear in the same sentence? It is ironical how wild cherry trees can have toxins even though their fruit is edible. The leaves begin to produce fairly concentrated cyanide as they wilt. The pits of the fruits can also do the same when ground up.

Though it is unimaginable for one to go for the leaves if you can access the fruit, you may be forgiven to assume the whole plant is edible. It also leads to fatalities in animals once they consume the leaves.

Yes, we are all pretty familiar with castor oil, but did you know that they are actually beans and not seeds? Do not count yourself lucky thinking you’ve stumbled upon beans. They are so lethal that their toxin ricin concentration is enough to take you out!

They can only lose their toxicity once heated to a certain point to make castor oil. But before that, if you get exposed to them, they can cause permanent nerve damage.

It is typical to find this beautiful flower growing in most gardens. Regrettably, every part of this plant is poisonous if consumed, or burned. They have a white, sticky sap that contains a toxin called cardenolide glycoside. It is a type of steroid which can cause heart problems.

So despite them being pretty flowers, it’s imperative to wash your hands immediately after you handle them. If you have kids around, you should remove this plant from your yard until they’ve grown up. You can also wait till they can comprehend that eating them could be dangerous. If you were tempted to add them to your salads, now you know.

It is one of those seeds that you may know from its many nicknames such as jequirity or crab’s eye. Rosary pea is a beautiful plant and is usually used in beading. As harmless as it may seem, it contains a toxic called abrin, which is fatal to both humans and animals. When ingested, it causes nausea, liver failure, and even death.

There have also been instances where people have lost their lives after pricking a finger while doing the beadwork. You should use work gloves to protect your hands in case you’re handling this plant. Yes, they are beautiful and you may be tempted to have a taste, but remember they are just as lethal!

(Phytolacca americana) It doesn’t just look attractive; the name is adorable too! Its toxicity levels, however, are not so attractive. The berries are tiny with pinkish purple stalks. So, no matter how hungry you may be, restrain yourself from eating them as they are incredibly intoxicating.

A handful of these berries is capable of taking out a child, and if you add a little more, you can die too. Luckily, you can avoid these berries as they are easy to spot.

Other poisonous berry plants include:

It’s also known as deadly nightshade and is relatively common in North America nowadays. They can be easily be mistaken for blueberries, especially if you’re hungry. All parts of this plant are toxic with the roots being the most dangerous. The toxin here is called atropine and can cause an increase in human’s heart rate, dizziness, and hallucinations.

If you go as far as putting it in your mouth, you will know it from its extremely bitter taste, and you should spit it out immediately. It’s so toxic that a leaf is enough to kill you potentially. But we hope it never gets to that point.

Don’t panic from the above list of poisonous plants as they are just as many edible ones too. That’s why it is essential to learn as much as possible about plants to quickly know which ones will save your life and which ones will take it away. But for starters, we’ve listed some nonpoisonous plants that you can look out for below:

Plants are also ideal for home and garden decorations. However, knowing the right kind can save you a lot of grief in the future. Vegetables such as tomatoes are great for a home garden. They are easy to grow and safe, even for kids. Sunflowers are also great plants to grow at home. They are nontoxic and turn into beautiful flowers to brighten any space.

Another nonpoisonous plant that is great even to grow indoors is the Venus fly trap. It is a carnivorous plant but not to humans. Kids can have a field day feeding it.

If you’re lost and hungry, your judgment may be impaired and you may end up a bit delirious, which can lead to some fatal decisions. Hunger has an effect of making anything look like food, more so if you come across beautiful plants. If you’ve gone for outdoor activities, it is best to bring your snacks with you to avoid settling for plants when hungry.

Remember to bring plenty of water too. If you have a home garden, have adequate knowledge of the plants that you decide to grow. There are many poisonous, edible plants everywhere that look like they would be edible but are extremely dangerous. So, before putting anything in your mouth, make sure you have an in-depth knowledge of these plants!

Have you ever mistaken a poisonous plant to be edible? Which plant was it? Kindly share with us your experience to further our knowledge.

This article has been written by Ronald Pratt for Prepper’s Will.