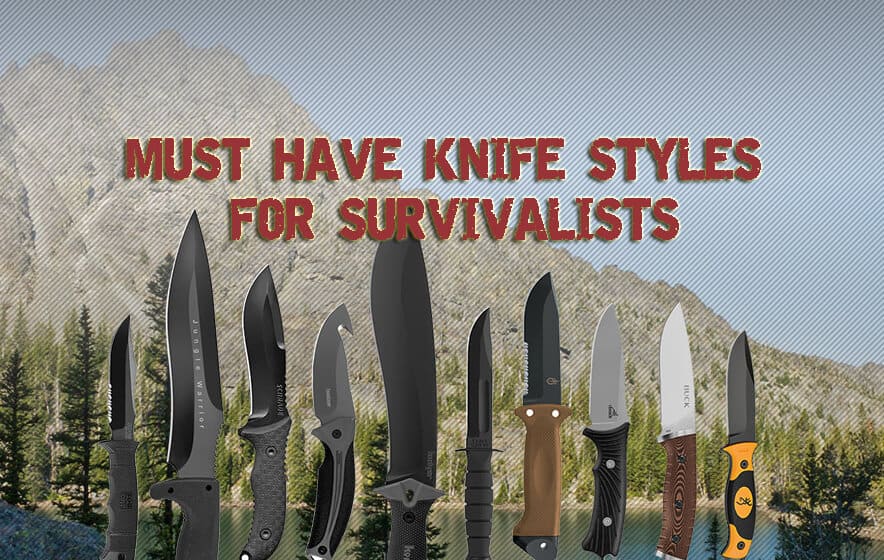 When people start talking about survival, prepping or off-grid living, the most contentious debate occurs over which survival knife is best. All sort of questions are asked and eventually, some people will settle on a certain type of knife. In this article, we will approach the survival knife debate from a different angle. We will look at the top seven styles of knives for survivalists.

Having a good knife when exploring the great outdoors or when things go sideways in the world is as critical as having food and water. We should think about which survival knife style is good for us by looking at our daily lives. After all, you don’t need a good knife just because you’re waiting for the world to end.

There is a vast array of available knives and we have to be sure we make the right choice, before settling on a certain survival knife model or a certain brand. A vast majority of the people I know don’t have a good set of kitchen knives in their house. It is something that makes “daily survival” difficult. Even more, most of them don’t even have an effective way to sharpen their knives.

I was one of the many until two years ago when I decided it’s time to replace my chopping tools with some real knives. If the world will suffer from a long-term disaster, a good kitchen knife will make your life easier.

There will be a lot of meal preparation taking place and you need a proper knife. Takeout or microwave dinner will be a thing of the past. You will have to do all your cooking using the kitchen knives you have.

A good kitchen knife is an important addition to every household. It becomes a reliable survival knife if you are forced to bug in. Whether you’re chopping and dicing vegetables, carving meat or slicing bread, a quality set of knives will be required. Even if you take the show on the road, in a long-term survival scenario, a good kitchen knife can become a good weapon.

Suggested reading: Household items that can be used in an emergency situation When discussing hunting knives, one will immediately think of “combat survival” although the role of the knife has nothing to do with fighting actions.

A hunting knife has a large variety of styles, blades and handles more configurations that just about any other category. If you want to choose a hunting knife, you need to do proper research. You should know that not every hunting knife can be used as a survival knife.

Some prefer drop-point blades or trailing-point blades while others prefer longer blades. Some even use folding knives for skinning and those who bought a thin blade knife know how to work their way around the bone.

A good hunting knife it’s the one that works best for you. The one that allows you to efficiently skin and dress game properly. Think about the following when choosing a hunting knife: the blade should be easy to sharpen in the field and the handle should have a good grip. Otherwise, it will slip when wet with blood. If you prefer to use a survival knife for hunting, make sure it fits your needs when being out in the field. It seems that lately, more and more companies are producing their own version of a bushcraft knife. This is due mostly to the success of the “Survivor” TV show.

Being able to work with what nature has to offer in order to survive is the basic definition of bushcraft. A good bushcraft knife will help you survive when you get stranded in the wild.

Nature has a lot to offer and wood it’s a resource that you can find almost everywhere. You can use wood to make a fire, to make tools and even to make traps and snares. You can even carve wood to pass the time and get rid of boredom.

All these tasks require precision and your bushcraft knife should be very sharp. It should also have a comfortable handle (to allow extended periods of use). Older models of bushcraft knives use high-carbon steel for the blade and round birch grip.

Modern ones may have G-10 grip scales with S90V used for the blade. It doesn’t really matter the style you prefer as long as it does the job. Many survivalists like to use a bushcraft knife as a survival knife and to be honest, is just a matter of liking. A good pocket knife can be found in every EDC and in a time of need, it can become a good survival knife. Most often, a folding knife will come in handy. Carrying it on you at all times will make a huge difference if an emergency scenario occurs. It will be a backup for your primary blade and a go-to tool for everyday use.

When getting a pocket knife, just about any quality pocket knife will not work as a survival knife. As a main rule, you don’t want to go cheap. You will need the best tool you can have, a robust knife that requires less maintenance.

If you plan to include a pocket knife in your EDC, make sure you check the reviews of the model you chose. When going for a survival knife, make sure you pick one that is robust (preferably ¼ inch thick) because you never know when you might use it to cut, chop hack or pry. The blade of a survival knife is also an important characteristic. I would personally go with a drop point or clip point blade that can also be used as a hunting knife or penetration tool.

A textured, no-slip grip is to be considered because you want your survival knife to be manageable in wet conditions. Think also about the length of the blade and pick something no shorter than 6 inches. You will be able to use it for chopping and processing firewood.

The downside of all my selection criteria is that I’m not able to carry it in my EDC. Carrying it around will most certainly spook my neighbors and it’s also not practical. A survival knife should have a little extra on the side. Chose knives with a fire starter or a sheet that is designed for sharpening the blade. In a world where laws no longer apply, the average person won’t have any major knife-fighting moves. A tactical knife will act as a last resort defensive tool for many of the unprepared.

Some of the hunting knives and survival knives will work just great as a defensive knife. A lot of the manufacturers recommend their knives as “also good for defensive tactics”. If you are trained to use close combat weapons, you can inflict serious damage with smaller blades.

However, the average person doesn’t have the same skills. For them, I recommend going with something that is comfortable and doesn’t require extensive training.

Think of the basics and go with a tactical knife that has a long enough cutting edge to make substantial slashing cuts. In addition, your survival knife should have a point profile that allows effective penetration.

The downside of most tactical/defensive knives is their size and many will feel much comfortable handling something a bit shorter. A smaller knife is more effective because it can be easily concealed and used in a surprise attack. However, the short length of the blade might not be enough to do real damage.

Regardless of what tactical knife you chose, make sure you practice and get used to it. You will know what to expect in a real scenario and how to properly use it for the scope it was meant to serve. I couldn’t end this article without going big! A machete is an extremely versatile tool that will qualify as a survival knife when you need one. Machetes are used for clearing vegetation, doing light chopping on sapling and cutting anything that’s in your way.

Whether you are at home and you need to clear some bushes or bugging out, a machete will do the work. Use it to build a shelter or to portion a chicken for a nice meal.

In many countries, the machete is the perfect survival knife. It is used for just about all cutting and chopping needs. This is a tool that many survivalists consider a must have for their bug out bag.

A machete can be a definite survival knife when nothing else is available.

When it comes to choosing a survival knife and to survivalism in general, the two is one and one is none rule should be considered. A survival knife is the ultimate survival tool and tools will eventually break. I recommend having multiple backups for your tools and the same goes for your survival knife. If budget is an issue, one should purchase knives that serve multiple tasks.

The survival knife styles discussed above should provide readers with a basic understanding of what styles are available. Not everything listed is a must and you have to choose a survival knife based on your opinion and experience. These are good starting points and the rest is up to you.

Survival MD (How to survive when there is no doctor)

1 thought on “Seven Must Have Survival Knife Styles For Survivalists”