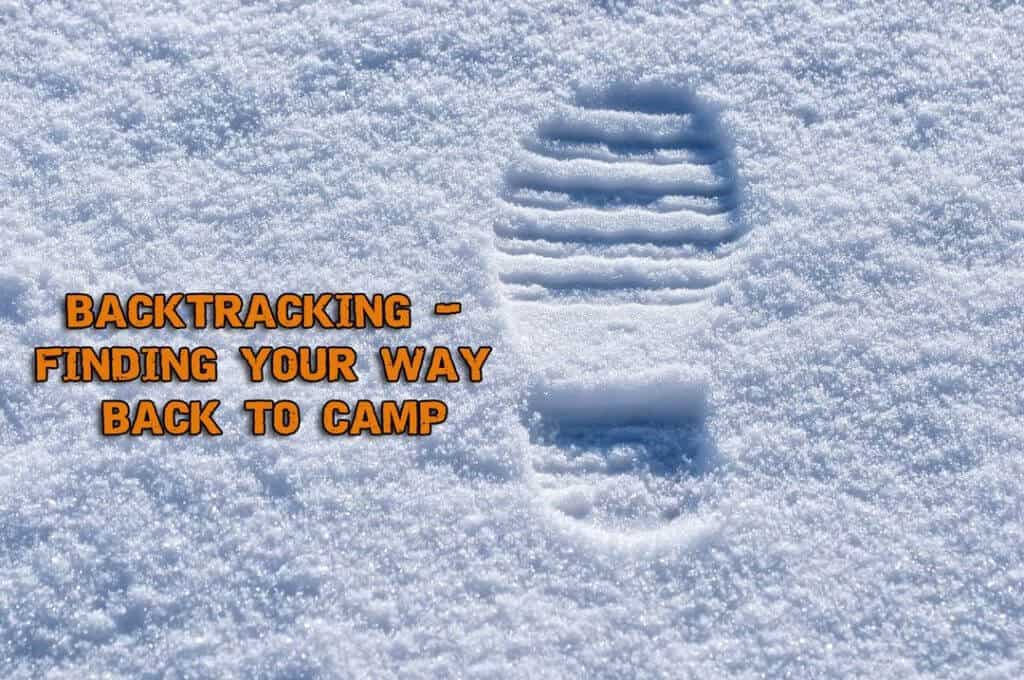 Finally standing over that ridge taking the photos you’ve been after for the last couple of hours, you’re filled with a sense of accomplishment. Unfortunately, it’s soon replaced by overwhelming panic, when you can’t remember which way back to camp. It doesn’t really matter whether it was the excitement, the long walk, or mesmerizing surroundings, either way, you’re lost. At this point backtracking your way to camp is the only chance of making it out of the wilderness.

One wrong move now and it could be your final, fatal mistake. Years ago, backcountry guides seemed to have a real nose for direction, after all, their living depended on it. Most modern outdoorsmen, however, can’t devote as much time to learning orientation. The average person spends at least five days a week scratching out a living in town, and many consider themselves lucky to get out once a year.

Why is backtracking important?

Contents hide
1 Why is backtracking important?
2 Backtracking and footprints
3 Backtracking and flagging
3.1 Suggested reading: Tracking Techniques Learned From Our Ancestors
4 The tracking stick
4.1 Related article: Bugging Out Without Leaving A Trail
5 Backtracking signs
6 Conclusion
7 Useful resources to check out:

That’s not nearly enough time to develop a finely tuned sense of direction. So what can a person do, simply keep on guessing and taking chances, or perhaps leave the outdoors to the professionals?

The absolute best method of ensuring your safe return is to understand thoroughly, and learn to use a map and compass. It’s even possible to navigate exclusively by tall, easily recognized landmarks. In fact, if you’re like most people you use a combination of both.

But what about those times when you spot something you’d love to explore further, but were totally unprepared?

What happens when the forest is so tall that it’s impossible to take compass readings? How is it that some people seem to navigate flawlessly, even on moonless nights?

Backtracking is one of the most reliable, yet often overlooked methods of finding your way back. Basically, all you do is track yourself, and it’s a perfect way to supplement a compass in some very tough situations. It’s much easier than it sounds, and with a little practice, you’ll soon be able to enhance your trail by leaving clues along the way.

Anytime you’re working in a particularly rough, hilly, or thickly forested area; it’s a good idea to deliberately mark the trail periodically (especially when you’re exploring new terrain). Not too long ago guides would cut a mark in a tree, facing the direction of return. Though we avoid this practice today because of the damage it does, there are certain things you can do to make your mute back easier to follow.

When it comes to backtracking, probably the most important step is to study your own boot print thoroughly. Many people that track quite a bit will actually cut a notch in their sole to make it easier to identify. It does you absolutely no good to follow a “trail” back to someone else’s camp, only to find they’re long gone!

One of the best ways to enhance your trail is to make a habit of leaving good footprints behind. Usually, that means stepping on anything on the trail, that’s pliable enough to hold it (within reason). Snow and drying mud are ideal, and have a very good “memory.”

Sand isn’t quite as good, simply because the sides cave in after a few hours, obscuring most of the detail. If you can’t find soft material along the way, periodically kick your heel into the dirt, and you’ll leave very pronounced markings.

Sooner or later, you may run across an area, where it’s impossible to leave a single print. Should it be large enough, the problem soon becomes serious and could get you lost. Thick mats of pine needles, running water, and rock faces are only a few of these areas.

Used almost exclusively by search and rescue teams, one of the best ways to mark a problem route is with flagging. Basically, it’s any bright strip of paper, tied at eye level or above in trees along the trial. Bright yellow and orange are visible by flashlight and stand out well in the woods. I prefer crepe paper streamers over engineer’s tape because it’s lightweight, biodegradable (in case you forget some), cheap, and easy to find.

I’ve also seen people stack rocks, or use a stick to scrape an arrow in the trail. I don’t like either method, simply because they’re almost invisible at night, and when you keep the flagging in your pocket, you don’t need to bend over quite as often (stacking rocks is not fun with a full backpack).

Actually tracking a lost person is entirely different, and in my mind, one of the most enjoyable outdoor skills to learn. On more than one occasion, the U.S Border Patrol has used this Indian art not only to arrest illegal drug traffickers but to save a lost child.

Just like before, the first and foremost step is to identify and study the person’s footprint. If it’s in a high traffic area, or about to be obscured by other well-meaning searchers, somehow protect and isolate at least one good set of prints. Once you begin tracking and are miles away, you won’t be able to refer to this good track, so make a habit of taking notes.

Measure the footprint from the front of the toe to the heel’s back. This overall length is usually not the same as shoe size, though it can be. Then measure the widest part of the heel, the ball, and the thinnest part of the track (usually between the two). This gives you a pretty good “fingerprint,” but always make a rough sketch just in case.

Locate the person’s very next step, and measure the distance between the two. Known as stride length, this too varies widely and is the single most important piece of backtracking information available. Long lengths are typical of tall, fit people, while a child’s short legs force their steps closer together.

Even when you’re tracking the same person, stride length can at times vary. While uphill stretches will usually see it shorten, it’ll lengthen again on the way down. Tired or heavily laden people have shorter strides than those that are fresh, or without a burdensome pack (assuming they started with the same stride length). This knowledge makes it possible for a tracker to assess the relative physical condition of the person he’s after without ever seeing them.

There are no tools or equipment required to track well, but a “tracking stick” is very helpful. Basically, it’s any long, straight stick, that ideally has two rubber bands on it (I use an old walkie-talkie antenna since it stores so well). If nothing else, rummage around the area until you find something suitable.

Place one end of the tracking stick on the print’s heel. Now roll one of the rubber bands to where the toe ends, and your stick conveniently memorizes track length. Now rotate the tracking stick, until it touches the very next track. Move the second rubber band there, and it has stored stride length as well,

As I mentioned before, unless something happens, stride length usually doesn’t vary dramatically. That means that each time you place your tracking stick on a print and slowly rotate, it’ll touch the print beyond, and once you put it on that one… The big advantage to this system is how well it points out tracks, even on the hardest ground. When you use a tracking stick, you’ll be amazed how well you can find even the tiniest of clues.

Sooner or later, you’ll come to a spot that looks like the end of the trail. Particularly when you’re learning, it’s best to continue looking for some evidence of the next step, no matter how hopeless it looks. This is where the tracking stick comes in.

Related article: Bugging Out Without Leaving A Trail

When you rotate the stock, you’re pretty sure of where the next step should have been. Usually, you have a general direction of travel, and more than likely a spot you think they stepped on. Now prove it.

Look for “compression” cracks around rocks they might have walked on. Believe it or not, when you put weight on a small object, it digs into the soil. That “compression” is clear evidence. Perhaps they stepped on a green plant. Look for bruising, and if it’s laying down in a certain direction. Though you won’t get a clear track, almost invariably plants lay down and point in the direction of travel when they’re trampled.

One of the most consistent clues are tiny heel digs. They seem to show up, even on the hardest surface. In rocky areas, you may only see one pebble, turned over with mud on its bottom. But that is enough evidence to put your tracking stick down there, and begin to look for the next print (especially in a wilderness area).

You don’t always have to rely on the soil for help. Oftentimes, branches are broken or knocked off when someone brushes against them. Even the simple act of walking between two trees can make the branches go back unnaturally, though this is very hard to detect (basically one branch goes back first, then the other, rather than the windswept intermingling that’s natural).

Even when someone enters a stream, there is usually some water splashed where they got out. Mud often sticks to lug soles, making backtracking that much easier afterward. If they “brush up” their tracks, hoping to avoid detection, it’s even easier to follow them. After all, most areas are filled with hiker, rabbit, deer, and car tracks —an area without any almost looks like a paved highway once you’ve practiced for a while.

Perhaps the least understood part of backtracking, is the subtle role light plays. Tracking a few hours before and after twelve noon is murder, and should be avoided at all costs.

At sunrise or sunset, the light hits tracks at a steep enough angle to reveal even the tiniest detail. If you’re forced into mid-day tracking, try and shield the tracks from the sun with your hat, and shine a flashlight or signal mirror at them. Get as low as you can to optimize the viewing angle. Since your direction of travel is determined by the person you’re tracking, try looking from both the left and right sides of the trail, to maximize your speed and ease of operation. Those times you’re forced into tracking at night, get the light as close to the ground as possible.

As unbelievable as it sounds, by religiously using the tracking stick, anyone can become a proficient trucker with a little practice. With how conveniently it points to the next track, you won’t believe the tiny clues you’ll soon find. It’s not long until your speed increases, and you won’t need the stick until the toughest spots. It’s fun and best of all… the life it saves could be your own!

3 thoughts on “Backtracking – Finding Your Way Back To Camp”