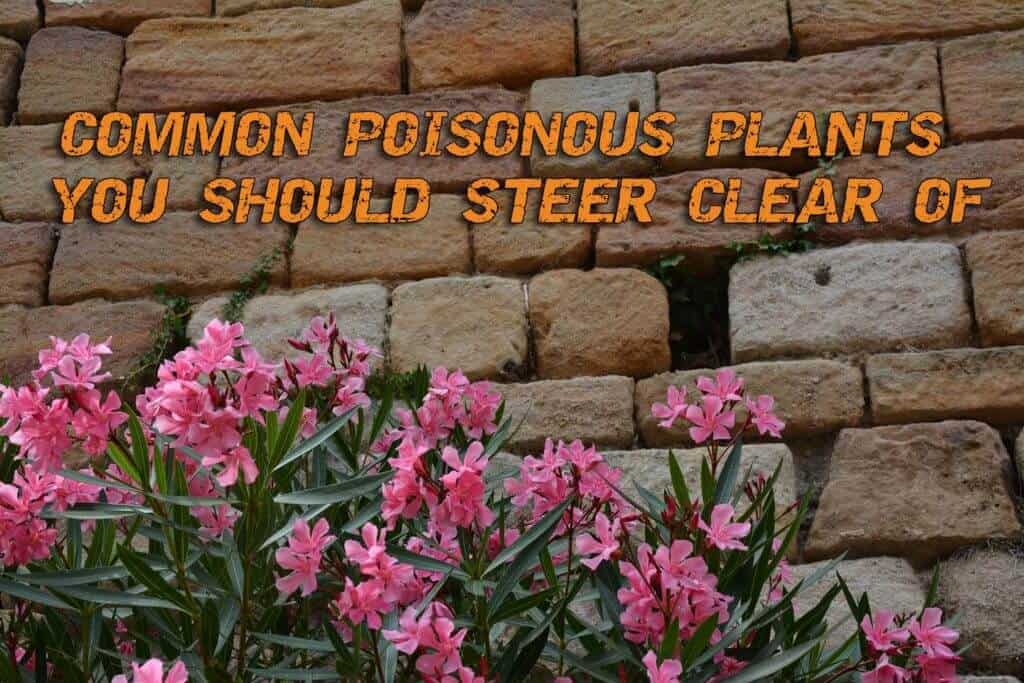 Few people know that many common vegetables and fruits have parts, which if eaten, are potentially lethal. From this article, you will learn about common poisonous plants that are a common occurrence in most of our living areas.

Socrates knew he was eating poison hemlock. Yet its appearance is so similar to that of wild parsley that many unsuspecting hikers have been killed inadvertently. They say that even common poisonous plants are edible, but only once.

Castor beans provide valuable medicine, castor oil, but they also contain one of the most toxic compounds known to man. Acorns were the staple food of most California Indian tribes. Manioc is still the primary food of many South American Indians. Both acorns and wild manioc contain toxins which must be leached before they can be safely consumed as food.

The tomato plant is a native of the Americas, where Aztecs, Mayans, and Incas cultivated it for millennia. After the conquest of Mexico, tomato seeds, along with their Aztec name, tomatl, were taken to Morocco via Spain. Eventually, the tomato reached Europe, where it was known first as Moorish apple, and later, because of reputed aphrodisiac effects, as love apple.

Even after it was taken back to America by European colonists, the tomato was planted only as an ornamental, never as food. No relative of the deadly nightshade was considered edible. Not until the nineteenth century did this superstition vanish. Ironically, the green parts of tomato plants are somewhat toxic.

The potato is another close relative of deadly nightshade. Native to the South American Andes, potatoes were introduced into Spain in 1534 and were sold for as much as $1,000 per pound, as a remedy for impotence. Eventually, the potato was recognized as a food, although its obvious resemblance to nightshade made its acceptance a very cautious one.

In 1728, in Scotland, cultivation of potatoes was prohibited by law. European cautiousness was not un-merited. The shoots, berries and sun-green tubers are, in fact, toxic. Green potatoes contain a much higher concentration of solanine, a poisonous alkaloid found in very low concentrations in all potatoes.

Any potato will turn green after exposure to the sun. “Potato poisoning” is signaled by vomiting, diarrhea, paralysis, and death. Green potatoes should never be eaten, even when thoroughly cooked.

Many other edible plants can be lethal if the wrong part is eaten, or if unripe fruits are consumed. The fleshy parts of nutmeg fruits provide a popular spice, yet two seeds can be fatal. Seeds of most stone fruits contain cyanide-bearing compounds, including the controversial laetrile, an extract of apricot pits.

Seeds and leaves of apples, apricots, cherries, peaches, and plums result in dizziness, coma, and death if eaten in quantity. This danger is an easy one to forget since many recipes for apricot preserves include use of toasted apricot pits, which add a tasty, nutty flavor to the jam.

Rhubarb is another tricky cultivated species. The stalk, or petiole, of the rhubarb leaf (the long, narrow portion which resembles a stalk of celery) is a popular food item. The blade, or wide, flat portion of the leaf, is extremely dangerous, due to concentrations of toxic oxalic acid.

Elderberry shrubs grow wild throughout much of the United States. Ripe berries are edible and are used for making preserves, pies, and wine. Indians made a drink from the berries, and dried and stored berries for winter use. The flowers were also eaten and were used as an antiseptic. However, many of the books on wild edible plants neglect to mention that unripe berries, leaves, and wood are all poisonous, causing vomiting and diarrhea.

Southwestern Indians made flutes from branches by thoroughly drying them, then boring holes with a hot stick. Yet some of the books which mention this procedure fail to point out that children are sometimes poisoned by using fresh twigs as whistles.

Fava beans, or horse beans, are perhaps one of the most unusual toxic cultivated plants. These seeds, relished by many, cause fetal hemolytic anemia, or “favism,” in others. Some individuals of Mediterranean and African descent lack an enzyme needed for proper digestion of the lava bean. The ability to consume fava beans is, therefore, an inherited trait.

Most of the toxic compounds found in most common poisonous plants can be classed as having one of four basic modes of action:

Many plant poisons can be placed in one of the following chemical categories, each with a characteristic mode of action and potential for treatment using antidotes:

These are very common and include such familiar compounds as caffeine, nicotine, codeine, and atropine. Alkaloids affect the nervous system and may produce either acute or chronic reactions. Common alkaloid-bearing plants include poison hemlock, tobacco, night-shade, and locoweed.

These are non-toxic crystalline compounds which, when broken down by enzymes in the body, yield toxic compounds. Cyanogenetic glycosides are the most common type. These break down to release hydrocyanic acid, a cyanide-bearing poison which causes cellular asphyxiation, i.e., inadequate transport of oxygen within body tissues.

Many organic acids have toxic effects. Oxalic acid triggers kidney failure. Tannic acid, the toxic component of acorns, can do the same.

These are complex materials which may irritate the skin or nervous system. Some of these compounds appear as a white, milky sap. The milky resin in milkweed stems and leaves is toxic, as is the milky juice of euphorbias (spurges), including the popular Christmas ornamental, poinsettia, Cicutoxin, a resinoid found in water hemlock, is the most deadly plant toxin round in the United States.

There are no foolproof methods for avoiding poisonous plants. However, a few simple precautions are essential whenever wilderness survival is attempted.

Hastily compiled edible plant manuals may be incomplete, or inaccurate. Some background in botany is useful. Most floras, or regional plant identification books, are quite technical. Remember, plant identification is serious business. One mistake can be fatal. Herbalogies should be used with caution. Many valuable medicinal herbs are lethal if administered in slightly larger doses.

A good example is the Indian tree, Strychnos nux-vomita. Its seeds are the source of natural strychnine, an ingredient of many old-fashioned tonics. Jimsonweed, common throughout the Southwest, was valued by many Indian tribes for its medicinal and vision-seeking hallucinogenic properties, yet fatal overdoses were relatively common.

Related reading: The Hidden Poisons In Your Pantry

3. Don’t experiment with mushrooms. Only experts should collect wild mushrooms for the table. Knowledge of the structure and classification of mushrooms is essential. Sophisticated spore-identification techniques are used to distinguish between toxic and edible species.

4. Look for warning signals. Milky sap frequently indicates poisonous resins and juices. There are, of course, exceptions. Lettuce develops a harmless milky sap as it ages. Many poisonous fruits are brightly colored. The brilliant baneberry is poisonous, as is the striking red and black rosary pea, frequently used in jewelry. These fruits can be especially attractive to children, for whom lethal doses may be very small.

5. If poisoning occurs, seek medical aid immediately. Be sure to take a sample of the plant suspected of causing the problem. If possible, give the doctor an entire plant, including roots, stems, leaves, flowers, and fruit, not just the part which was ingested. Other plant parts may be essential for rapid identification by a trained botanist or poison control specialist.

Here is a small sample of the numerous dangerous species which surround us. You will find both the common name and the scientific name of the genus if you want to make an extensive research.

Without proper identification, selection of an appropriate antidote may be impossible. If medical aid is unavailable, make an attempt to identify the plant accurately, and rely on a good medical manual for treatment and antidotes. Base your choice of treatment on the general type of poison, i.e., alkaloid, glycoside, organic acid, or resin. Specific plant species will probably not be listed in a medical reference.