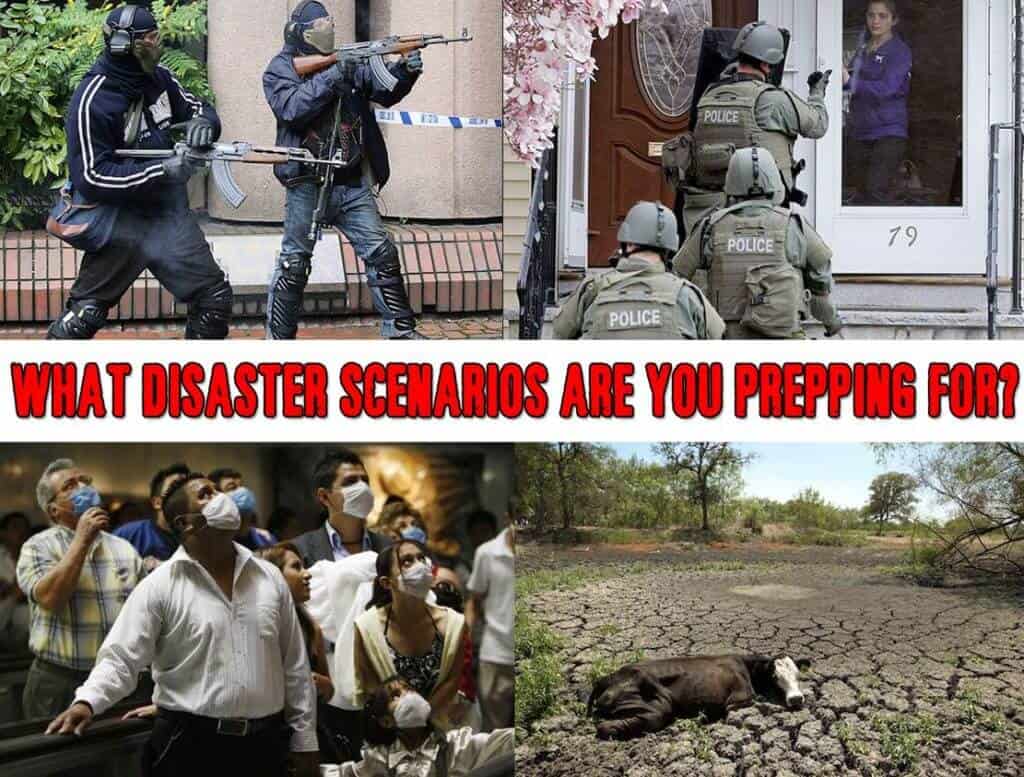 In 2013 there were an estimated 3.7 million preppers in the United States. This number has grown constantly since then. It seems that there are many disaster scenarios people fear. What seemed like an “odd” trend at first is now becoming a constant reality. Many Americans are readying for the worst and their list of disaster scenarios is growing.

We all have our reasons to prep for and the idea of preparedness covers a variety of people. From those who have a month’s worth of supplies to those who are able to be almost entirely self-sufficient for many years.

Chances are, you are just like me, somewhere in between.  Prepping can become a complex activity and the absence of proper knowledge will complicate things for most people. This occurs often since many of them don’t know what types of disasters could befall on them.  Once you establish the type of disaster scenarios you should be prepping for, the road becomes less difficult. You are focused on a specific target rather than just trying to cover everything.

Here is the range of disaster scenarios that most Americans are prepping for: These can include various types of events. The most occurring ones are: floods, forest fires, hurricanes, tornadoes and ice/snow storms. In many parts of this country these natural disasters are happening often and people have learned to prepare for them. You see regularly on the news how these events affect the lives of families. The wild forest fire from Canada was a wake up call for many, regardless their nationality.

I believe that these events were a rare occurrence during our childhood. It seems that they have become more and more frequent in the past years. Events such as Hurricane Sandy or the winter storm Jonas are perfect examples of how weather events are hugely damaging over a wide area. Even more, they reflect the reality of how ill prepared people are. How many of them fail to realize the impact such events will have over their lives. You’ve seen it on the news how people were raiding grocery stores because they lacked even the most basic foods to survive for a few days.

Extreme drought is also another event that would bring severe water restrictions and affects food crops and California is being called the new dust bowl.

It is no secret that some areas are prone to sudden and very destructive violence or social unrest. There are many factors that can trigger such disaster scenarios. Riots and violent protests are known to quickly widespread in a town. They are causing business failures and restricting public servicing from functioning properly. The BLM movement fueled by debatable police actions and backed by various organizations is just another example how social unrest is increasing in the US.

We are currently living in a developing world that thrives on debt. At some point, you have to wonder what will happen when the market finally crashes. Hyperinflation will wipe out your savings overnight. There will be a supply shortage as no one wants to trade with a country that suffers from currency instability. Just look at what Venezuela is going through and you will get the idea of what an economic collapse will bring. There is a false idea being perpetuated that we are too big to fail. A lot of people don’t realize how real this threat is.

You can’t reason with fanatics and brainwashed people not matter how much you try. You also can’t integrate them in your culture when they see everyone as their enemies. Terrorist attacks can happen anywhere these days as their purpose is to instill terror. Terrorism has grown to an alarming rate and nowadays. It seems that high value targets are being replaced with any type of event where a large number of people congregate (malls, schools, concerts and any other social events).

The terrorists aim to spread the idea of fear and lack of safety no matter where you live. Europe is currently under siege as you’ve seen in the news. These fanatics want to destroy our way of life and they will stop at nothing to achieve their goals. There is an intensifying debate on banning guns, and people rally behind this idea thinking that they will be safe. That is absurd and no one can guarantee that banning guns will limit terrorist acts. Terrorists can kill tens of people using just a truck, we should ban trucks now? It doesn’t matter for them; they will strike fear using any means necessary.

Like it or not, the world still has its nuclear threats. The possibility of a rogue nation launching a nuclear weapon, dirty bombs or natural disasters affecting nuclear facilities are all too real. North Korea and Russia are currently the main nuclear risk factors for our country. While the first country is years away from having the right technology (allegedly) to become an immediate threat, the second is constantly testing our patience and military technology.

While a third World War seems like a farfetched scenario, there are a lot of people investing their hard earned money in bunkers. They plan various other types of shelters that would survive a nuclear blast. There are several companies offering bunkers or other type of underground shelter solutions for such disaster scenarios. According to their reports the demand for such products is increasing year after year.

Related article: Emergency bunker – What you need to know

Whether natural or manmade, there is always a chance of an epidemic or pandemic spreading throughout the world. The bird flu, the swine flu and now the zika virus are just some of the examples we witnessed in the past decade. Viruses can suffer mutations and there is no telling what such a scenario would bring. Manufactured biological weapons are also a real possibility. The thought of some terrorist organization acquiring such weapon is terrifying. Survival becomes a difficult task when medical aid is not available, regardless how self-sufficient you have become.

There are also other type of events, called mega events that will cause the collapse of civilization. The most dramatized ones are a super volcanic eruption or large asteroid impact. However, the probability of such event to occur is quite low. Personally, I would put this threat at the bottom of my disaster scenarios list.

As you can see, there are many types of disaster scenarios that could potentially affect your future. It is up to you to decide which should be on top of your list and how to prepare for them. I recommend reading the article below. It will certainly help you make a threat analysis and establish which disaster you should prep for.

Once you have them prioritized, you should figure what you would need for the shortest duration event. Afterwards, build up for the longest duration events. Start by gathering the right set of supplies and try to acquire new skills. These two critical preparations would make survival easier if a certain event will occur.

Emergency preparedness is a continuous process and you need to adapt it to your daily life. You need to do so without affecting your quality and cost of living. Start with small steps and build up at your own pace and soon you will be able to make it through just about any disaster that can hit your family.

Popular Survival and Preparedness solutions recommended for you: