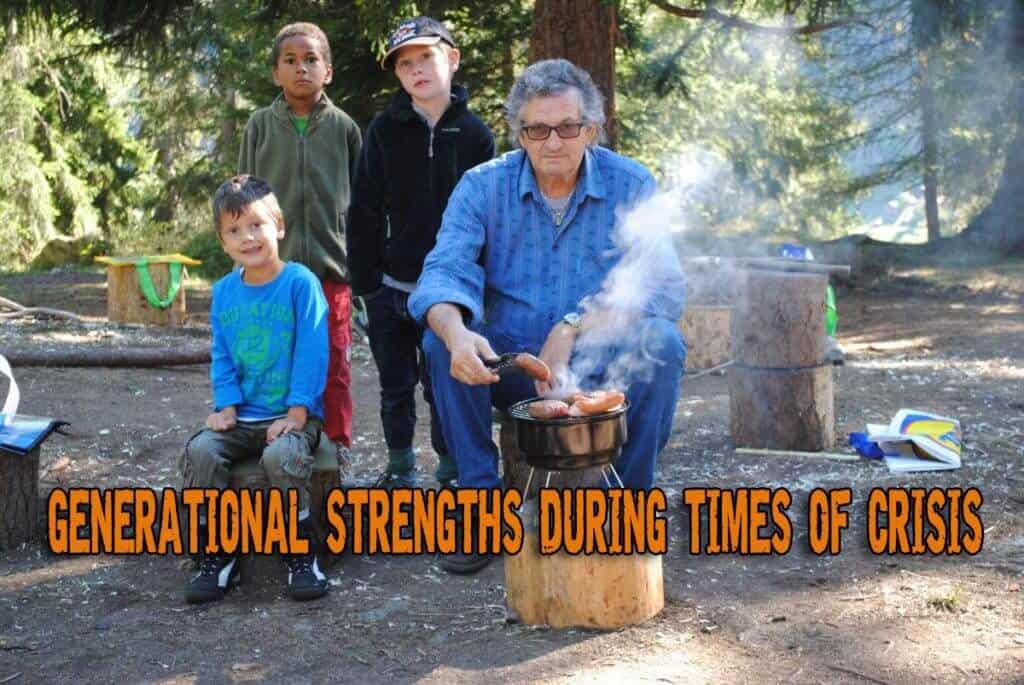 When SHTF, an important aspect to keep in mind will be the differences in each age groups strengths and permanence. Among multiple variations of these strengths, some will be easy to distinguish while others may be a bit more obscured or veiled (these will need to be sought out on a near individual basis before being of much use).

As a crisis strikes, it will be important to understand these strengths of each age group. Every member of the group you find yourself with (if any at all) plays an important role in making up a well-functioning team. As families, loved ones, and friends, it is dire that we know how to operate as a disciplined, well-organized instrument. Each individual who makes up the “team” you find yourself a part of will bring important aspects and traits that will help everyone else get along.

Though there are several ways to break down the age groups, the simple fact is that every one individual, in his or her own rights, has their very own, special circumstances and experiences that make them stand out from the rest. That being said, this is a generalized compilation of familiar traits found within each generational gap. With potentially four separate generations making up your “survival team”, it can be tough to perceive what they all need and where they are best employed. Baby boomers (or the elderly), Gen X (middle aged), Millennials (the collision of youth and mid-life experience) and Gen Z ( the forefront of the youth) each convey a diverse dynamic; but in order to sincerely envision, their potential is you must first grasp their generational characteristics.

Strengths and Debilities of the Generations:

Here we will get into the generalized compilations of skills and perhaps setbacks that each generation will carry into a crisis with them.

Sometimes overlooked (quite foolishly, all things considered), and other times considered as ‘feeble’ or ‘weak’, the older folks have a good deal of insight that few of us could even fathom. Those in our midst who have a mass of life knowledge make for splendid companions during a crisis.

The ones of us who are widely versed in the ways of the world possess a set of strengths that most of the other age groups simply can’t match: it is your wisdom, love, brilliance and the experience of an entire life. That experience can give a survival group some of the mental stability it will need in order to make many of the other skills all tie together.

Aside from experience, one of the most prevalent strengths of the well-experienced is their characteristic of being “addicted to work”, often hankering for long hours and overtime. Since their beginnings, the baby boomers have been more devoted to their positions than any other generation. They can also be considered as great at getting along and working well together with others.

On the other hand, this generation of go-getters, have a peculiar preference for organization and control, which makes them less liable to greet change with much cheer. On average, they also need more acknowledgment and gratitude to keep them encouraged in nearly any scenario. The older folks are also considered the least competent in technology, restraining their aptitude for much use of developments.

Related article:  Prepare Yourself – Prepping Starts With You!

This lack in tech-savvy is made up for in their knowledge of the great outdoors. Being one of the last generations to receive hand-me-down skills from the days of old, the boomers have an understanding of life before the technology. These skill sets are slipping from existence fast.

All in all, there will never be a better time for wise, calming advice than during a survival situation. With emotions rearing to life, and frustration amuck, there will be a desire for those who have already experienced those affections. This wisdom will bring stability, aspiration, and will to live to those struggling to cope with the crisis.

If you woke up out of bed this morning pondering how wild your twenties were but knowing that twenty more will be even worse, you might just fall into this generation! Just a midlife-joke, but the ones who make up Generation X actually bring unique strengths to the table; especially so in the areas of leadership and creativity.

Being straight from the horse’s mouth, so to speak, Generation X carries a lot of their Baby Boomer predecessors, making them extremely hard workers. That work ethic mixed with their creativity helps them to stand out from the rest.

They have the critical thinking skills that allow them to see a physical problem and come up with a reasonable, physical resolutions to it. They are well equipped for helping others to see their vision clearly.

This generation is capable of doing physical labor in an extremely professional way. They are also known to have [very good] personable skills and are good at working hard to keep others happy around them. It is clear how helpful this could be in times of crisis.

When s is htf, the middle-aged members can serve wonderfully as a bridge between the older folks and the adolescent, making them ideal directors and [strategists]. It could be said that no other generation would be better to lead than the ones who may be growing old by measures of the body, but remain fresh and young in their minds.

Here we may run into some “technical difficulties” (see what I did there…). Due to the introduction and rapid technological growth, we can see many juxtaposed tides wash the shores here. The generation of millennials has been talked about in many a manner. However, they are not entirely helpless (as many would like to claim).

Those who speak against the millennials must recognize that they were practically the last of the hardcore Boy Scouts, the last of the true summer camp connoisseurs, the generation that experienced the evolution of the after-school hours spent in the woods into the late night shredding of newly developed video games. This gives them a special insight that no other generation has ever experienced.

Believe it or not, there is a sort of similarity (granted, along with a major difference in technologies) between those who experienced the great depression and the millennials. Contrary to popular belief, they do have a bit of knowledge in the days of old and survival itself.

Millennials can be considered incredible independent workers as well as being concerned with ethics and social responsibility of the people around them. This does not, however, help the group in the sense that they may not as interested in collaboration. They can also show traits of impatience.

The millennials, in their later years, can easily become mixed with the newly developing generation Z.

The faster the years roll by, the farther we move from the days of old, the more impotent people become. In fact, it could be said that most young people have not even the most basic survival skills. And once you start to consider all the other needed skills to survive a crisis, it only worsens.

Most young people have never cooked a meal from scratch, nor collected and purified water. They are not very skilled at starting fires (for cooking and warmth, that is), or building shelters, making/handling weapons, self-defense, or even navigating life in general without some sort of electrical device.

This gives good reason to question if they will even survive any sort of crisis-like scenario. However, the youth have a plethora of strengths that will come in mighty handy if there is ever a widespread crisis:

Being the adolescence they are, the youngest generation has the potential to do an impressively large amount of work. Their backs and shoulders and joints, in general, are in the best shape that they will ever be in. They can often outwork the older generations three to one (though it is often because they work hard and not “smart rather than working “smart”). Still yet, this shows the extraordinary force that the youth possesses. If they are encouraged and loved correctly, their work capacity is incredible. With the right teachers, they can fall in line with the best of the best.

Yet another natural talent the youth maintains is that of abundant energy. When morale is low and some are suffering, simply seeing the hard effort put forth by an adolescent can be of extreme encouragement.

Suggested reading: Becoming A Leader During A Crisis When Others Panic

In times of crisis, the young have the ability to have the energy to work hard, reminding all others on the team what exactly they are fighting for; be it love, happiness or even freedom.

Generation Z is the most tech savvy of any generation; they pick up on advancements quicker than most. This can make them important when utilizing technological innovation. With their cool tattoos and tech skills, generation Z can also multi-task like no other group. However, when it comes to down-to-earth survival scenarios, a cool ouroboros tattoo and programming skills will not help you survive.

The main concern with this generation is that they don’t have much experience with a time before social media and easily accessed technology. This has made them susceptible to lack in real-time survival needs. Their reliance on technology can be perceived as a real problem, and statistics show that to be a growing problem.

Again, we must collectively realize that the above are extreme generalizations, and when push comes to shove, each single, individual being will have his/her very own unique set of skills to bring to the table.

That being said, no matter who makes up your “team”, whoever it is you are placed into a survival-like crisis with, every age group will bring their own distinct abilities, talents, and strengths. It is important to keep in mind that not every skill sets are bodily. Much of the time, in fact, those bodily skills won’t really get you that far if they aren’t supported my much mental skill. A pleasant thought is that we can forget the references to generations as labels, and create a collective trait that is powerful enough to not only help others survive, but to help rebuild where reconstruction is most needed!

No matter the crisis or the age group you find yourself in, you will have a good trait to contribute to everyone else. Nearly anybody can take the appropriate steps to grant themselves the chance, no matter the scenario, to survive the disaster.

There is no age limit on prepping! Stay sharp out there!

1 thought on “Generational Strengths During Times of Crisis”