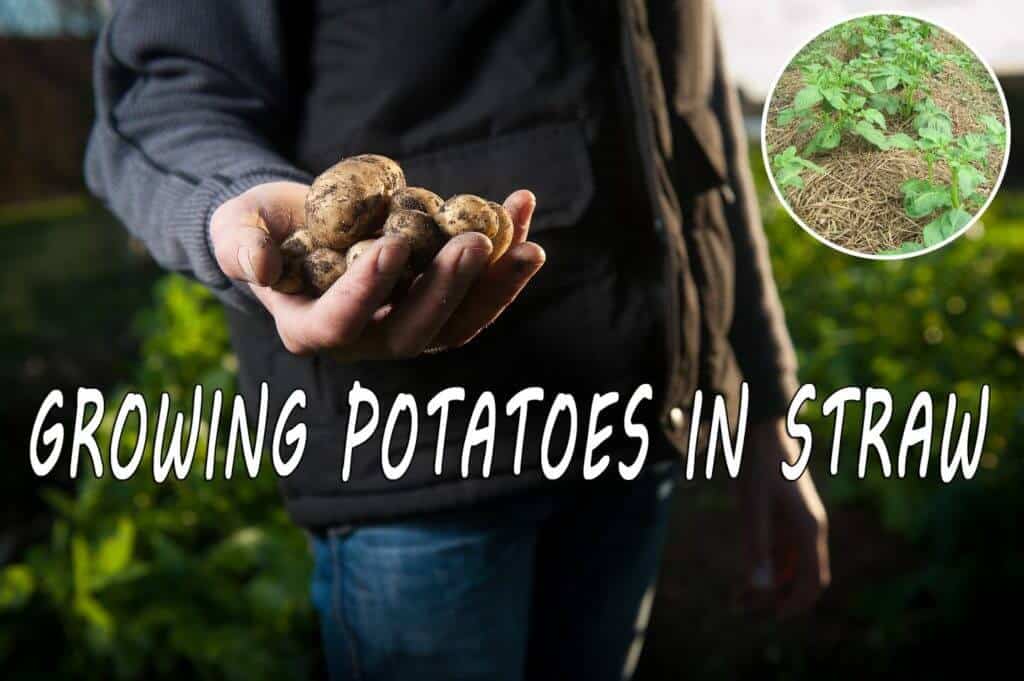 Growing potatoes in straw is a well-known gardening technique in Northern European countries.  The inhabitants of those countries have been doing it for hundreds of years. They have perfected the method of growing potatoes above ground in straw. Besides straw, they also use hay or other mulching materials.

After spending a lot of time at my father’s farm, digging potatoes out of hard dirt, I decided that job is not for me. After dealing with an achy back, I said is time to give his suggestion a try. Starting the following spring, with a little skepticism, I began growing potatoes in straw.

By using straw mixed with a bit of manure or compost, you can grow a large crop in a limited space. It’s actually an ideal method to grow potatoes for those who live in urban centers. It’s recommended for people struggling with limited space and the lack of cultivable land.

Methods of growing potatoes in straw

There are numerous ways of growing potatoes in straw and the following two are the simpler methods. Anyone can do it as long as they have the proper seeds and pay attention to what they are doing.

Start first by cleaning the vegetation from the area where you want to grow potatoes. Place the seed potatoes directly on the ground and cover them with a 50/50 mix of straw with old manure 12 inches deep. After you carefully covered all the seeds, soak with water. The tubers will form in this mixture and flourish. When the potatoes start to grow, keep adding the straw with manure mix mounded up the base of the plants. Water the mix regularly.

Keep in mind that mounding is an important step. If the tubers are exposed to sunlight, they will turn green and become toxic.

When growing potatoes in straw, you only have to deal with a few weeds. You can easily remove by hand the ones that appear. The best part about growing potatoes in straw is that you need less watering. The straw holds most of the water in, even during the hotter part of the day. Harvesting becomes considerably easier and you won’t have to worry about a back-breaking labor.

The corner of the straw can be lifted carefully and one can see how the potatoes are developing. New potatoes can be harvested easily even before the potato vines mature completely. Once your potatoes are ready to harvest, just pull back the straw and remove them by hand. Remove as many potatoes as needed, then place the straw properly. Keep the light from reaching any remaining potatoes. You can harvest potatoes a number of times and the plant will produce more and more potatoes until the vine dies.

Plow the dirt in the area where your potatoes should grow. Dig a trench about 10 inches deep and fill it with layer of straw. Sow your seeds in the trench than cover it with a five inch mixture of straw and compost. As a rough guide for this method, for a 100 feet row I usually need 8lb of seed potatoes. This of course depends on how big your seed potatoes are and if you cut them or not.

Water the trench regularly. The straw may often pack down so you need to add a little more on the top. The straw insulates the plants and provides heat during the colder months.

During the harvest season, you can easily pull up the plants from the straw trench.

Regardless of the methods you decide to try, bugs will usually appear. How you handle the potato bugs is your own individual choice. You can choose to dust with an insecticide, pick off the bugs by hand or make your own organic bug killer. After growing potatoes in straw for a few seasons, I’ve tried it all. I’ve dusted and picked, but it all depends on the degree of infestation.

You can use neem oil, a natural deterrent for many insects. It is considered a safer option for humans and animals than chemical options. To treat your potato crop, spray the oil directly onto the infected plants. Apply it regularly every one to three days during dry weather. If you live in an area with damp or rainy weather, you need to apply neem oil immediately after the weather clears up.

Another method to kill potato bugs is to use wheat bran over the plants and leaves. It was reported that bugs consume the wheat bran and they eventually die. Apparently, the wheat bran continues to expand in their stomach causing the pest to die. Growing potatoes in straw using these two methods is much easier than the traditional way. Harvesting is less labor intensive and it’s a much cleaner work. You will avoid spending time digging the potatoes out and you will just have to pick them from the straw. Once you see how much easier it is to plan your potatoes in straw, you will never go back to planting them in dirt.

1 thought on “Growing Potatoes in Straw for Easy Gardening”