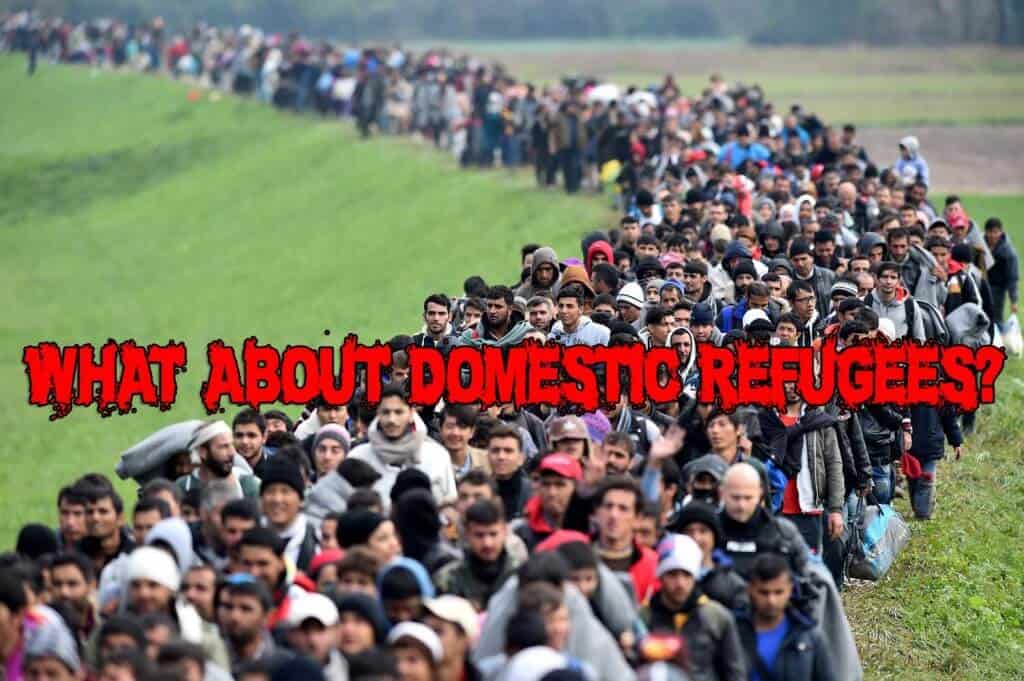 A major crisis will create multiple waves of refugees. In time, these refugees can become a major problem for the entire world. The conflict in Syria and the Paris attacks are just recent examples of what human exodus can lead to. When SHTF, there will be a lot of domestic refugees roaming around and we should be prepared to handle them.

Although I understand why people are concerned about Syrian refugees and I agree that they shouldn’t be allowed on U.S. soil, there is something else that concerns me. Some people fail to understand that there will be a bigger problem if a major disaster happens in America. If some apocalyptic event happens in our country, we should expect a vast number of “domestic refugees”.

What are domestic refugees?

The people you work with, the people you know and even distant relatives you haven’t heard from in a while, they can all become domestic refugees. These are the people that are forced to migrate inside their own country. They will be forced to do so when a major disaster occurs in their area and they are left without any other alternative.

Some call them “the unprepared”, but in reality, it can happen to anyone. It all depends on the type of disaster that affects their lives. If you are a prepper or an off-gridder, your chances of survival are higher than for the common citizen. However, sooner or later you will have to deal with these domestic refugees.

Should we be concerned about domestic refugees in America?

Yes, we should. I will give you just a recent example of a potential crisis scenario. Something that will create a large number of domestic refugees. If you haven’t lived under a rock for the past five years, you might be aware of the NASA warnings regarding the solar activity.

NASA has been issuing these warnings for years and only this month, the White House admitted that they started to prepare for this scenario. You can imagine that a massive CME (Coronal Mass Ejection) is no joke. It will create an EMP that will cripple the country.

Related article: How to survive an EMP attack

In the 12 to 15 hours warning, there will be chaos. It will put in motion a series of events that will affect us all, regardless of where we live. I won’t get into details about how to survive an EMP attack right now. I’ve written about it in a previous article so feel free to look for it. However, I want to talk about the result of such an event, the domestic refugees.

How will domestic refugees behave?

Human history has shown us how people act when resources are scarce. They either migrate to a friendlier environment or they risk it all and try to survive with what their current environment has to offer. This might have worked in the past when people weren’t dependent on technology as they are today.

In our modern times, once the resources from an area are cannibalized, people will move to the next area. They will continue to do so until they find a place to settle. Unfortunately, very few have the knowledge to survive and start over with what they can find in a particular environment. Even if there are those who will start over, things will not go smooth because they will have to fend off wave after wave of domestic refugees.

People are concerned about Syrian refugees that are being brought to the U.S. They fear that they can be armed and indoctrinated to attack American citizens. Once again, I do agree that this is a possibility, but that’s not the only thing we should worry about.

Related reading: How to form a Survival Group

Once the SHTF, we will have no other choice than to deal with domestic refugees because time creates desperation. The longer they will struggle to survive the more desperate they will become. The worst part is that most of them already have all the guns they need and they know how to use them.

As time goes by, it will become a fight for survival. We have to understand that not only external refugees can become a problem if SHTF. Land and resources are the main reasons for starting a conflict. Before we prepare for external threats, we should also be able to handle the local ones.

How to deal with domestic refugees?

I’ve said it before and I’m going to say it again, if you are a lone wolf, your chances of survival are limited. There is safety in numbers and you should have your own survival group if you want to survive when SHTF. You should have a post-collapse community and you should make sure all aspects of community organization and leadership are covered. If you are part of a survival group you will be able to deal with domestic refugees.

Once you are part of a community you will need to have rules. Rules relating to those who show up at the perimeter of the community. Make no mistake, people will come and they will request access. You have to consider that each person allowed in will be one more mouth that needs to be fed. Every decision the leader makes will affect the community.

When it comes to domestic refugees asking for access I suggest following these guidelines:

If the refugees have no propriety or familial connection within the community or the ability to offer necessary skills and experience, they should be sent on their way.

Some refugees will request food and water if they are not allowed in, but there will be no room for charity. There will never be sufficient supplies to give away. It might sound harsh or even cruel, but the needs of the community members come first.

When it comes to removing domestic refugees from the perimeter of the community, you have two options:

You should not detain them and you should explain clearly that they need to move along. Regardless of the option you chose, there are some pros and cons you need to be aware of.

If you deny them access and ask them to leave, there is the risk of them attempting to enter the community through an unobservable point. Even if you have the area patrolled, you won’t be able to keep it under 24/7 surveillance. The good part about this approach is that if it works, the outsiders won’t see what’s inside at all. They will not be able to carry word about what you have and won’t make a target out of your location.

If you decide to escort them through the community, you have the guarantee that they’ve moved on and you are able to keep an eye on them until they do so. The bad part is that you will basically give them a guided tour of the community and this puts you in a vulnerable position. They will use the knowledge against you or they can trade the information to someone else down the line.

Regardless of what you decide, it is important that everyone involved understand that the rules need to be enforced equally and to the letter. The guards should be given a clear list of desirable skills. You shouldn’t let someone in just because the refugee is attractive.

Any refugee that poses any of the skills desired by the community should be detained in a location near the gate until questioned further.

As I’ve said before, the needs of the communities will vary based on the number of members, location and available resources.

Some of the most desirable skills are:

All potential new members should be quarantined for at least a couple of days before being granted access to the community. They should be examined by medical staff to ensure they are not carrying illnesses or parasites. You don’t want to introduce a new problem in the community. Make sure new members are being given the medical treatment they need. The quarantine should be located near the outskirts of the community to prevent the spread of any disease the refugees may be carrying.

Each new member should be questioned and the quarantine time is the proper time to do so. They should be questioned about the world at large as they are the ones who can provide an exact picture of what is happening outside. What they saw, what they heard are details that can become crucial to the survival of the community.

Related article: How to travel when SHTF

Each new member should be supervised and educated to make sure they can integrate into the community. They should learn the basic rules of the community and acknowledge the chain of command.

They should be supervised to make sure that they understand and respect any specific rules of the community and to prevent them from getting into trouble. Some of these rules can differ greatly from what is considered common sense.

When it comes to long-term survival scenarios safety in numbers is the number one rule. You can’t make it without a community, no matter how much you try.

You have better chances of facing those who survive the initial disaster, the domestic refugees. Be sure to prepare for whatever may come and handle the human factor carefully. After all, that’s the most unpredictable factor of them all.

Self-sufficiency and Preparedness solutions recommended for you:

Bullet Proof Home (Learn how to Safeguard your Home)Save