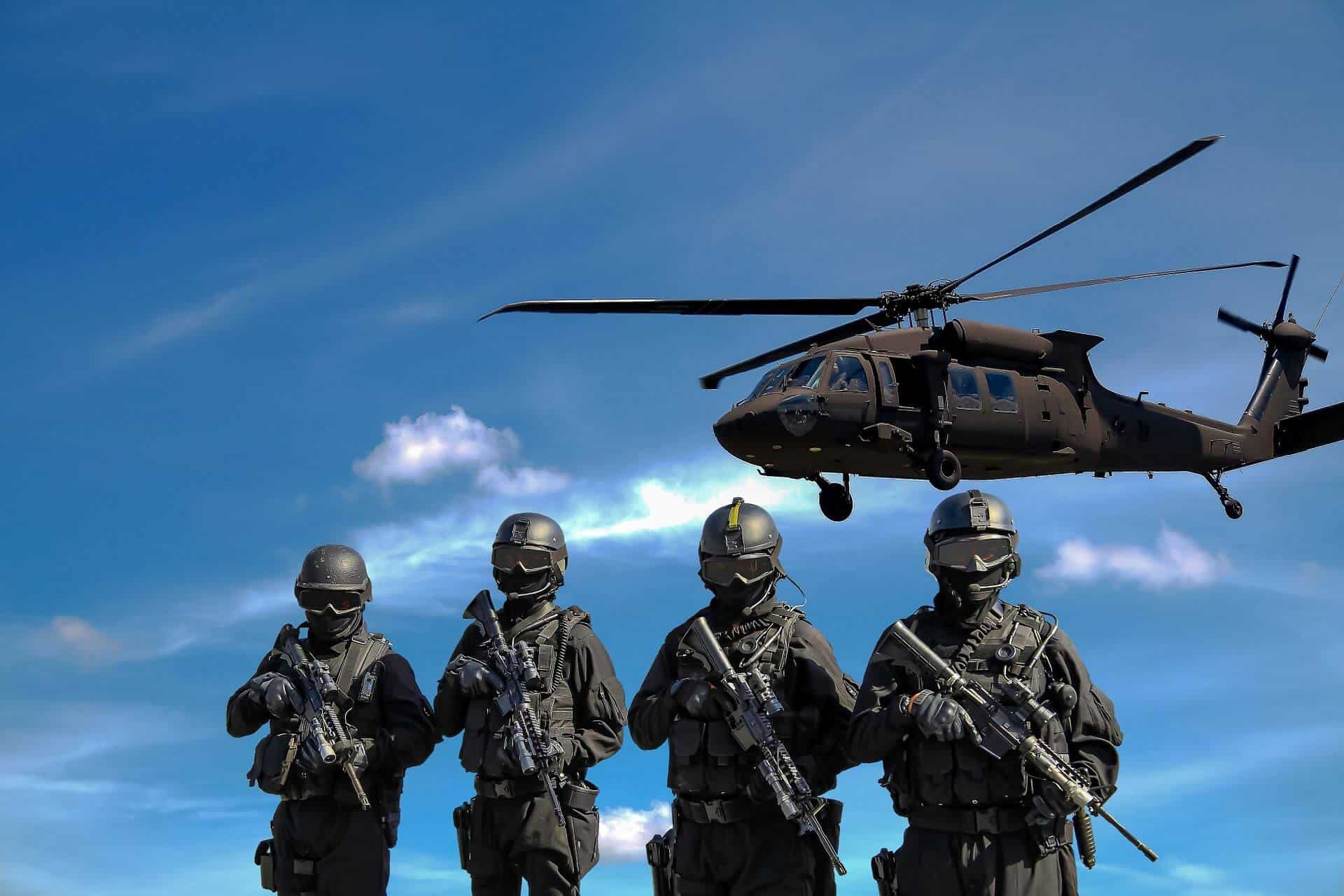 We live in uncertain times with constant threats knocking at our doors. One day, we might live under Martial law, and although the use of Martial law should bring an end to the scenario that imposed it, most of the times it will lead to further violence and chaos.

The United States, like many other nations, has a long history when it comes to Martial law and some fear it may soon be upon us. The current scenarios that foresee Martial law are all related to ISIS attacks that could happen on US soil. This is why you need to have a survival strategy for when Martial law hits.

What is martial law and when it is declared?

Contents hide
1 What is martial law and when it is declared?
1.1 These are the rights that are suspended under martial law:
1.2 Be self-reliant
1.2.1 Read more: Essential pantry foods to survive the worst
1.3 Have a bug-out-bag ready
1.4 Stay safe when martial law is declared
1.4.1 Related article: Home Defense at it’s finest
1.5 Tune in and listen during martial law!
1.6 Stay in shape, learn and improve your skills
1.7 You should never be alone! You need friends during martial law
1.7.1 Related reading: How to form a survival group
1.8 Keep your mouth shut during martial law
1.9 Be calm and think before you act
1.10 Plan your storage for a home invasion
1.11 Act when the time is right
1.11.1 Other Useful Resources:

Martial Law is nothing more than the imposition of military rule and a takeover of the government over a specific region. Martial law is declared when there is an imminent threat to peace and order, and it can be imposed in any of the following situations:

We value our liberty and freedom, and we love our way of life. This is why for some of us being stripped of certain civil rights is unthinkable, and we fear that giving absolute power to someone will lead to abuses against the general public. During Martial law everyone is expected to follow the rules, no question asked, it doesn’t matter if you think it’s right or wrong. You must follow the orders during martial law! The military will not answer to people; they will be the law.

These are the rights that are suspended under martial law:

If you are prepared and organized, you should be able to survive martial law without much distress. To avoid putting your family at significant risk and survive these tough times, you should do the following:

Most preppers are already set to outlast any scenario that cuts them off from all the typical supply lines. This is why it will be easier for them to survive when the government takes full control of everything (foods and supplies). You shouldn’t wait for the rationing done by the military, and you should have your own supplies. Your supplies should last you for at least 30 days, but any prepper knows that it is ideal to have supplies that last for 12 months. Your food and water supplies will become propriety of the government under martial law.

Having a method to generate electricity is also ideal. You will be able to use it for many tasks under martial law (from cooking to charging your devices – UV water filters, lanterns, etc.). Try to get your hands on some portable generators, that are easy to carry and that don’t make noise, as you don’t want to attract unwanted attention. Bartering is also an excellent way to get what you need, stockpile on items that will give you the upper hand and increase your chances of survival. Bartering will assure your survival under martial law.

Have a bug-out-bag ready

In some cases, you will see the signs that alert you of martial law being imminent. And in times like these you have to make a decision, you either stay in and hunker down or you leave and go to a safer area. Some know that staying in highly populated areas is certain death and have an escape route planned out. If leaving your home is not a choice for you and your family, bugging in will be your last resort. Your bug-out bag should contain the following:

During Martial law, you need to avoid areas that are exposed to social revolts and danger. You have to protect your house with an alarm system, keep it locked and secure your proprieties.

Keeping a low profile by following the rules is also a good idea, but you have to think before you do it. If someone tells you to jump off a cliff, would you do it?

Think before you act and decide on an individual case by case basis before rebelling against the rules. Make sure you respect the curfew under martial law. However, if you don’t, make sure you have all the means to protect yourself and survive what will unfold.

Tune in and listen during martial law!

During martial law, the media will be controlled by the federal government and to obtain valuable information you need to stay tuned to official broadcasts. You will be up to date with the imposed rules, and you will be able to plan your next move. The rules will keep changing, and you need to be aware of them in order to survive.

You will also need to tap into HAM radio to communicate with people that are off the grid, to get the “unofficial” information. It is better to know both sides of the story before you act, we are already enough bombarded with media propaganda, the last thing you need is to be misinformed during martial law. Information is key to survival in and time of life, and especially when martial law is in effect, and you need to know what happens around you.

Stay in shape, learn and improve your skills

This is a general rule for every prepper, and it’s something that can prove useful in every crisis scenario, not only during martial law. Preparedness is nothing without knowledge and a good set of skills. You will run out of food and water, and you will run out of guns and ammo. You will get hurt, then what? That being said, you need to know how to make or procure your food, how to find and purify water, how to heal yourself and so on. These are the things that one should learn in advance and practice them with every occasion.

Take some first aid courses, learn how to cook without modern means, how to hunt and fish, anything that you think, one day, may come in handy. Being able to survive on your own during martial law will also require a lot of effort. Maybe you have to bug out, and climbing is involved, or perhaps you have to build a shelter or do home repairs, etc. All these activities will leave you weak and tired, and you don’t need this during a crisis.

However, if you find yourself in a position that you are tired, stressed and in need, you should take some time to recuperate. That does not mean find a bed (although that would be nice), but it means to find somewhere safe to set up a little camp. Make a cup of coffee, take a little time to plan your next moves. It is often in these times that your judgment is most clouded, and that can leave you ending up injured or worse.

You should never be alone! You need friends during martial law

Desperate times will require teamwork and having an alliance can become crucial for surviving under martial law. You should build a support system with your friends and neighbors. You can help each other out, and it will increase your chances of survival without getting into trouble. Before you build trustworthy relationships with your neighbors, you should act carefully. You need to be certain they share the same views as you do. You don’t need a “friend” that will report you for having a stockpile of food and guns, just to save his skin when martial law hits.

Related reading: How to form a survival group

Don’t talk about your supplies and about how well prepared you are. This can get you in a lot of trouble during martial law. Desperate times create desperate people, and these people will do anything to survive, including harming you and your loved ones to get their hands on your supplies.

You should share only with your family and close friends and that if you have enough supplies. It might sound harsh, but it will keep you alive under martial law.

Be calm and think before you act

In any type of crisis panicking will get you in trouble and you will make matters worse. The first thing you have to do in harsh times is to remain calm and carefully plan your next steps. Although this may be a very difficult thing to try and do, it will certainly make the difference between life and death, and you should put your best effort to remain composed.

Panicking people are seen as a threat, especially under martial law. Even the most prepared soldiers will choose to eliminate a risk rather than dealing with it and see how the situation develops. I can’t stress this enough, stay calm and think before you react. Rationality and being able to restrain your emotions will help you survive martial law.

Plan your storage for a home invasion

During martial law, hoarding food, guns, and ammo is restricted. The military will implement house to house searches without a warrant. They will put a considerable effort into locating your supplies. And once they find them, they will confiscate all you’ve got without thinking twice about it.

This is why it’s essential to plan your storage and be smart about it. Keep your supplies in areas of the house where it will not be easily found. You don’t want to put all your efforts into preparing so that it can go to waste in the end.

You can also use the bait method, which is having a small part of your supplies “hidden” without much effort. When they find your supplies put up an act and ask them to let you keep them, they won’t, but they will not put any more effort into looking for your other supplies if you are convincing enough.

Act when the time is right

In the event of martial law, when the situation is at its climax you might have to take a stand. It is your right to pick a side, and no one can take it away from you. Before taking a chance and choosing a team, you have to be sure it suits your personal beliefs and principals.

Even more, taking a stand doesn’t mean you have to join the resistance and take it to the streets. There are always alternative ways of fighting for what you believe in. You just have to find a way to be safe and make yourself heard. Not everyone will find the courage to act under martial law.

Keep this in mind when thinking about taking a stand. It will put things in perspective, and you will figure out your chances of making it out alive during martial law.

Knowledge to survive any medical emergencySave