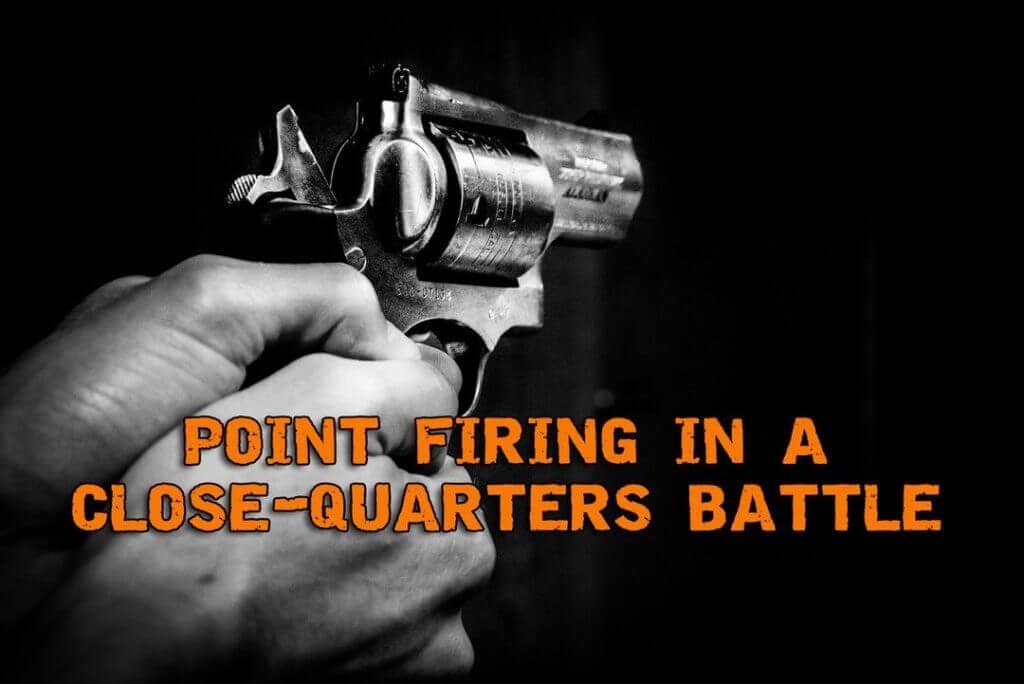 Combat and self-defense shooting with the one-handgun falls under the heading of close-quarters battle technique, insofar as proper categorization is concerned. When you think about what that implies, you get a feel for the appropriateness of point firing as the right method of combat shooting.

When we see or read about, or participate in so-called combat shooting matches, we often find that the distances with which we deal are unrelated to the distances of realistic close-quarters battle. We see participants engaging targets over spacious areas. They use aimed fire (as one clearly must, under such circumstances) and they deal with tactical situations that just do not occur in real life. All of that is great fun, to be sure, but this type of shooting has very limited use or value in preparing for serious combat.

We know for sure that combat with handguns in the real world, between victims (civilians or police) and criminals, characteristically occurs at distances under 21 feet. Almost always, in fact, distances are less than 10 feet. Yet, the notion that aimed firing at opponents in close combat is feasible continues to dominate modern combat shooting theory. This was not always the case.

A little bit of history on close-quarters battle techniques

During World War 2 when there was no time for the weekend warrior shenanigans we see today, men such as Rex Applegate of the U.S. Army and O.S.S., and William Fairbairn of the British Commandos taught point or ‘instinctive” firing the handgun. Their system established itself as the one appropriate for combat shooting against live targets that shoot back. However, the years following WW2 saw the emergence of the so-called “new technique” of the pistol, and the dominance of has become known as the new sport shooting school or system—the I.P.S.C.

The I.P.S.C. has generally substituted two-handed aimed firing technique for point shooting and, sadly, had led the shooting public to believe that its founders more or less developed this style. One of the people responsible for “new technique” doctrine, Jack Weaver, popularized a particular two-handed form of shooting that today bears his name.

In 1930, however, the firearms authority J. H. Fitzgerald demonstrated a shooting position that is obviously the same as today’s so-called “Weaver stance.” A photograph on page 303 of his book, SHOOTING will confirm this. So it seems that neither two-handed shooting nor the “Weaver stance” is anything new.

The two-handed shooting did not begin in the 1950s with the men of the Southwest Pistol League. It began long before that and was taught extensively by Rex Applegate to the American forces. Fairbairn taught the same thing, and both men taught two-handed firing as part of the point-shooting method!

There is no denying that the use of the sights in aimed fire is the superior way to shoot in sporting combat matches. When the targets do not fire hack, and when they are positioned at distances exceeding 20 feet, the best way to engage them is by aimed fire, using two hands if possible.

When one fires at targets in broad daylight (as one always does in sport shooting matches) then deliberate aimed fire—i.e., the use of the sights—makes sense. When there is an absence of combat stress, then one can efficiently make use of the weapon’s sights every time one fires at the target.

NOTE: I have emphasized those words, “absence of combat stress” in the last paragraph because it is vital that the reality of the existence of such stress be duly noted in any consideration of combat firing technique or handgun use. When we read about the superiority of the so-called new technique of the pistol, it is Imperative that we remember the fact that this “superiority” has been established exclusively within the contest of competitive match shouting.

While some people claim that the pressure of sport competitions will effectively duplicate the pressure of a combative encounter, that hypothesis seems incorrect to me. Just as competition in the martial arts ( karate, kung fu, and other styles) more often than not fails miserably to even half-prepare the participant for battle, so the same is true of the armed fighting systems.

Yes—there is stress and tension and pressure when one competes. No—it is not the same as the energy-draining hell or battle, or emergency self-defense fighting. This was understood readily by the pioneers of real-world close-combat shooting (Applegate, Fairbairn, McGivern, Fitzgerald, Jordan. etc.) but was discarded as irrelevant by the founding fathers of the cult of modern competitive shooting.

During a close-quarters battle, a phenomenon occurs that makes the sighted aimed fire inappropriate. It is the called tunnel vision. Simply stated this means that one focus, naturally, will be on the attacker.

One will not regard a shooting adversary as one might regard a paper target on the range. One will focus— pin—one’s eye, on that target because that is the natural, instinctive thing to do. One will point one’s weapon in a direct shoving action at one’s target, maintaining a convulsive grip, and then one will pull (not squeeze or press) the trigger!

This much realized it seems almost insane to expect a shooting style that goes deliberately against what is natural for the human animal to do to be effective as combat training.

The suitable method for firing one’s handgun in a high-stress, suddenly occurring situation, is the one that is the most natural. And no system is so functionally natural as the proven point shooting system. Remember—we are speaking of proven for actual real-world self-defense and survival encounters with armed assailants.

We are not claiming or suggesting that the point firing method can ever measure up to aimed use-of-the-sights firing at distance targets during competitive, freestyle sport shooting matches.

Are the sights of a handgun ever appropriately used in combat?

Absolutely! As Fitzgerald decades ago painted out, and as Applegate. Fairbairn, etc. have all readily concurred, the weapon’s sights are properly utilized when one engages an adversary at a distance. When one has time for aimed fire, and when there is sufficient light to see the sights.

However, this constitutes only a fraction of the types of predicaments one normally encounters during combat. Ninety-five percent or more of the situations that occur entail close ranges, dim lights, and the need for high-speed reaction.

Perhaps the big reason for the extreme lack of popularity of the point firing system is that it is without sporting or competitive application. People, especially in the West, like to compete.

Certainly, people should be free to pursue their interests as they wish. However, some very serious mistakes can be made—some dangerous mistakes—when an interest in sport leads one to expect that one is mastering life-saving skills by pursuing one’s interest. It is not in the nature of the sport, per se, to provide battle skills or proper mental preparation fur combative encounter.

The widespread acceptance of what is called the new technique of the pistol has led to a widespread acceptance of a “right” handgun for combat shooting. A package deal, in other words. Once one accepts the “new technique” as gospel, one will accept the particular weapon that is best-suited to the successful utilization of that technique: the heavy-duty, big-bore semiautomatic pistol. While various shooting instructors and other renowned shooting figures will recommend certain handguns, the selection is not always easy.

Your weapon of choice for close-quarters battle

While their suggestions may be the best (as seen by some), they are not the only ones that will serve, nor the necessarily always the best choice for everyone under all conditions.

Many factors go into the selection of the right handgun in a given instance. Simple personal preference, based upon aesthetic appeal has an awful lot to do with it. There are men and women who just happen to “like” a certain weapon. period. That fondness encourages practice, regular handling, constant carry, familiarization, etc.—all very important when It comes down to use.

And there are people for whom the proven weapons suggested by many are not well suited at all. For combat firing, the point shooting system will work equally well with any handgun type! It does not favor the automatic, and it offers certain advantages in some cases for the lesser calibers (like the .22, the 9mm, the .380 automatic. the .38 Special. etc.). Frown as they may upon these “inferior” calibers, weapons that utilize them have been responsible for saving an awful lot of lives. The lighter calibers may easily be fired one-handed using the point-firing method.

Suggested reading: 5 Guns Every Prepper Should Own

Proponents of the aimed shooting position we today call the Weaver stance argue that this stance permits the use of a big bore handgun with the accuracy of a rifle. This is true, but it is also beside the point.

There may rarely be times when one’s concealed self-defense handgun may be required to perform like a rifle, but who’s kidding whom? That is not what handguns were designed and intended for, and so long as rifles (and carbines) are available, let’s let them do their own job.

The handgun is a close-quarters battle weapon. It is a tool of close-range sell defense! Distance shots are the exception, not the rule. One who trains for defensive purposes should train primarily to deal with what is likely to occur.

My 2 cents on close-quarters battle

I want to state, for the record, that I believe the so-called “new technique” does offer a contribution to combat shooting that we ought not to underestimate or overlook. The technique of aimed fire vis a vis the Weaver stance is a great supplementary method to the core system of point firing. It serves well when one must engage a close-in target with a distance target, rapidly. The shift to the Weaver use-of-the-sights stance from a point firing isosceles stance is lighting fast. It is also easier to employ the handgun’s sights from a Wearer two-hand stance than it is from an isosceles two-hand stance.

I think that is an important and valuable thing to learn, and I feel its addition to the basic point shooting method increases that method’s comprehensive versatility.

Wonderful as the sporting combat matches are for those who enjoy participating in them, they fall short of preparing the participant for all-out close combat and self-defense under realistic conditions. This is not said to be critical of the method’s developers or adherents. It simply seems the inescapable conclusion of my research and the findings of other more qualified and experienced than myself, too.

For situations where it’s kill or be killed, when a fraction of a second’s notice is all the warning you get before some lunatic tries to shoot, stab, or club you to death, point shooting is the method to rely upon. It is a proven quantity. In fact, for close-quarters battle, it is the proven quantity with the handgun.