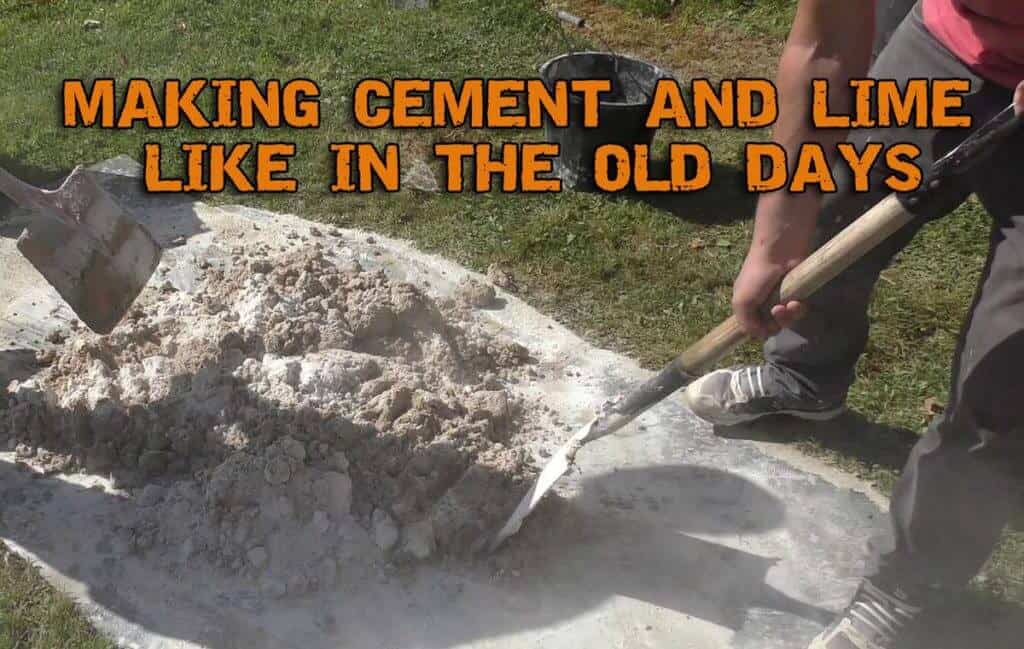 Making cement was an invaluable skill in ancient times. The ancient Greeks, Romans and Etruscans, and probably the Babylonians and Abyssinians as well, they all did it. So did the Toltecs in Mexico and the Incas in Peru. To become self-sufficient and get rid of your “addiction” to modern technology, you should learn how to make cement if you plan to live off the grid.

All the ancient cultures made cement without the use of electricity or petroleum products. And their cement-glued masonry is still standing, in structures, they built their empires on. With a little trial-and-error experimentation, you too can heat and crush limestone, and make your own cement.

Though it seems a miraculous powder, with the ability to bond rocks into solid and long-lasting structures, cement is actually a very simple compound.

Lime-stone (one of the world’s most common sedimentary rocks), if heated, changes chemically releasing carbon dioxide. If the limestone used has high clay content, the resulting lumps can be beaten to a powder that is cement. This product is known in the industry as natural cement. Relatively pure limestone (without clay), when heated and powdered, produces lime. Yes, it’s that easy.

A little bit of history

Contents hide
1 A little bit of history
1.1 Natural Cement
1.1.1 Related article: Cordwood Building – An Old-school Building Technique
1.2 How to make natural cement
1.2.1 Recommended reading: A Root Cellar Is A Must For Preppers – Build Your Own
1.2.2 Making the distinction between natural cement and lime
1.2.3 Pay attention when handling quicklime
1.2.4 A last word
1.3 Useful resources to check out:

Until the 18th century, cement was made according to the assumptions and methods used in Roman times. All cements were natural cement made from whatever limestone was handy. Consequently, some of those natural cements hardened quicker and solidified better than others.

Then in 1756, John Smeaton built the Eddystone Lighthouse near Plymouth, England—a structure renowned today as the “chief pillar of modern architecture.” Smeaton experimented with various limestones and realized that the rocks which made the best cement had a high clay content. He assumed, rightly that it was the mixture of clay and lime that hardened into what he called artificial stone.

Seventy, five years later, Joseph Aspdin, an English bricklayer, vowed to create a cement as strong as the famous stone quarried on the Isle of Portland (the stone that built St. Paul’s Cathedral in London). Aspdin blended powdered limestone, clay and water, then allowed the mixture to dry by evaporation. He broke the resulting mixture into lumps and threw them into a kiln.

After baking and then powdering, the result was cement, what he called Portland cement. It was as a good building material as the stone from the Isle of Portland. Aydin was the first to understand that combining specific ratios of clay to limestone under high temperatures created a consistently high-quality cement.

Portland cement is still made essentially to Aspdin’s recipe. But with a trial-and-error approach based on some informed guesswork, anyone can still make cement, using locally gathered materials and the available energy of charcoal or coal.

Natural cement made in that manner may not be as consistently strong or quick setting as the bagged kind, but even an approximately correct blending of limestone and clay can produce an excellent cement. Best of all, the materials needed are accessible almost everywhere, no matter what the condition of the consumer society.

The first ingredient in the natural cement recipe is limestone, luckily one of the most common rocks on this continent. Those who don’t know the location of any limestone near them can check a geological survey map of their area (available from most state university geology departments, state or federal geological societies, or state mine bureaus).

Limestone is a relatively soft fine-grained rock, often gray, white or black in color but then so are many other rocks. One test for limestone is to break a rock in parts, and if the odor of the newly broken faces resembles swamp gas, It’s limestone. Also, if a small amount of diluted hydrochloric acid added to a scratch on the surface of the rock produces bubbles of effervescence, the rock is limestone.

The key to the production of good natural cement is an appropriate proportion between clay and pure limestone. Most limestones are not pure but are already mixed with clay. Unfortunately, there is no easy way to discover what proportion is present in a particular rock. Microscopic analysis is necessary for that.

How to make natural cement

The best way to find out about the suitability of any specific limestone sample is to try to make cement from it. Heat and powder it, then add water to the powder.

If it sets easily to firmness and dries hard, the proportion is adequate. The optimum quantity is one-quarter clay to three-quarters pure limestone. If the mixture does not make good cement, most likely, clay will have to be added.

Of count one problem with the trial-and-error method is that all the limestone from one area is not chemically identical: the clay content can vary from stone to stone. Limestone is present in layers; however, by taking only stone from one level, the consistency of the final product is more likely.

To heat the limestone, begin with rocks of similar size. Approximately fist-size pieces are ideal, with certainly none larger than about six inches in diameter. The goal of the heating is to calcine the rock, to bake it to a temperature just below its melting point. The amount of heat changes the chemistry of the stone, purging it of carbon dioxide.

The specific temperatures involved vary with the percentage of clay present in the sample but roughly fall within the range of 1,800 to 2.500 degrees F (about 1.000 to 1.400 degrees C). The temperature that turns metal white hot in a blacksmith’s forge.

Recommended reading: A Root Cellar Is A Must For Preppers – Build Your Own

That high-temperature range is certainly not impossible to produce, but it does require a special kiln. The walls of such a kiln would have to be made of brick and the exhaust vent very tall to produce a strong draft.

Forced air intake, using a fan or bellows, could be needed. Wood cannot generally produce such high temperatures, though both coal and charcoal have the concentrated BTUs (British thermal units) required.

Inside the kiln, after a charge (a layer of fuel and tinder) is placed at the bottom, alternate layers of the coal or charcoal fuel with limestone. Seal the kiln (except for the air intake vents), light the charge, and alter the fire consumes all the fuel, allow it to cool. The calcined limestone will resemble the original rocks but will be chemically different.

After removing those rocks from the kiln, crush them and mix the resulting powder to promote uniformity. The crushing of the calcined rocks is quite easy. A metal bar (made from an automobile axle, for example) pounding into a salvaged brake drum will pulverize those rocks. The resulting powder is cement.

Make sure to store it carefully to prevent moisture absorption and mix it with water immediately before use.

Making the distinction between natural cement and lime

If the limestone selected, heated and powdered was pure (without significant clay content), the result will be lime. Again, the same problem of identification arises. Without chemical analysis, there is no easy way to tell if the resulting powder is lime or natural cement—other than adding water and waiting for the mix to set.

Natural cement, of course, hardens to rock-like firmness in a day or two. Lime won’t harden.

In both cases, adding water to the powder creates heat. Cement, as it hardens, gets warm, but lime gets so hot it can be explosive. So beware and test only small portions.

Quicklime is the name given to the powder resulting from calcining of pure limestone. Due to its dangerous tendency to heat explosively in contact with water, quick-lime is often slaked or mixed carefully with small amounts of water.

Slaking is done most safely by sprinkling water carefully on thin layers of quicklime (not powdered, just left in lump form) on a floor or platform. Add water until no more is readily absorbed, then turn the quick-lime and moisten again. The lumps of quicklime crumble as the water combines.

Cement and lime are both readily available to anyone with a kiln, fuel, and limestone. Ancient civilization around the world discovered that process millennia ago.  Today in remote sections of the developing world, cement and lime are still made that way.

Armed with this knowledge, survivalists do not need to rely on modern consumer society for these two very useful products. Making cement and lime is an easy process if you pay attention to all the details. It’s one of the skills that can help you become self-sufficient if you chose an independent life, far from the constraints of the consumerist society.

Being able to build something sturdy and long-lasting with your own hands provides a satisfaction that is hard to express in just a few words. After all, the goal of preppers is to become self-sufficient and survive using our own knowledge and means. Print this article and add it to your survival file, you never know when you might need such information.