Spiders are everywhere and you are never more than 12 feet away from one. A single house and garden may have more than 80 species of spiders. Estimates show that there are more than 4000 species in the United States. All these spiders have venom, but only a few spider bites are considered to be lethal to humans and pets.

Even so, it is best to know more about the spiders that are a threat to us and to provide reliable and valuable information on how to deal with these spiders. The fear of spiders

We have to understand that all spiders are shy, timid creatures that only bite us when being threatened. This is why most spider bites occur by accident as people fail to notice the spiders until is too late. The good news is that in North America, there are only a few species that have fangs large enough to pierce human skin. There is a real need for everyone to own and read a spider bites guide to learn what to do if you are bitten by a spider.

Venomous spiders found in the United States include the black widow, brown recluse, and hobo spiders. They pose the most threats to people who spend a lot of time in the wilderness. However, these spiders can occasionally find their way inside buildings and pose a risk to indoor people and pets.

There are two types of spider venom. The first is cytotoxic (hobo spider and brown recluse) and the second one is neurotoxic (black widow).

Cytotoxic venom is known to be toxic to living cells. The bites that contain Cytotoxic venom are very painful, and it damages the tissues and destroys cells. This effect is very similar to gangrene.

Neurotoxic venom is much more dangerous, as it attacks the body’s central nervous system and brain, and often causes paralysis.

It is difficult to identify a spider bite by a skin wound alone until it is too late. To have a precise diagnosis, it is recommended to capture the spider immediately after or during the bite. Then have it identified by an expert. However, seeking first aid is the main priority, as you do not want to waste time chasing or trying to find a spider that you may never find. Only capture it if it is easy and quick to do so. 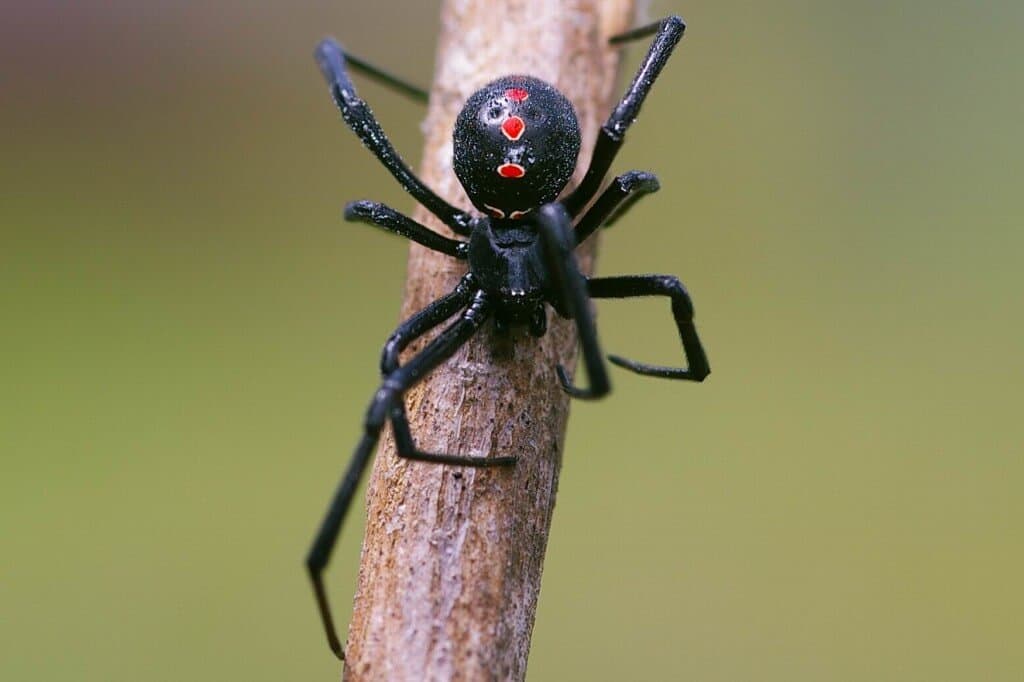 You can quickly recognize a black widow as they have a shiny, jet black body, ¼ inch long. They have a very distinct, red, hourglass shape on the underside of their abdomen and the males are half as large as the females. Males are not poisonous or strong enough to inflict a bite. On a spider bites pain scale, where level 1 is not perceptible and level ten is the most severe

What to do if bitten by a black widow:

Avoid black widow spider bites by wearing heavy gloves when moving items that have been stored for an extended period of time. Spiders often hide in shoes, so check shoes and shake them out before wearing. When spider webs are visible, use caution before putting your hands or feet in them as you never know when a black widow is lurking nearby. 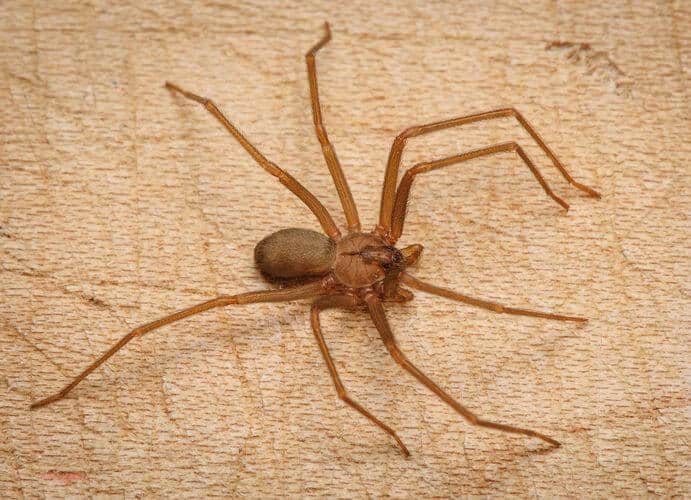 The violin spiders only have three pairs of eyes, whereas many spiders have eight. These are nocturnal spiders that feed on cockroaches and crickets. They live outdoors in debris and wood piles and the males are the ones that wander indoors in storage areas and dark recesses.

Like all spiders, the brown recluse spider only bites in defense and this occurs when the clothing, footwear or headgear they are hiding in is worn. On a bite pain scale, the violin spider bites rates an eight and on the skin damage scale the level is ten.

What to do if bitten by a brown recluse spider:

To prevent spider bites, shoes, gloves, and other infrequently worn clothing should be shaken before attempting to wear them. Thorough vacuuming around windows, corners of rooms, closets, pictures, under furniture and storage shelves should be regularly done.

Also called Tagenaria agrestis, the hobo spider is found in the northwestern United States, Washington, Oregon and Idaho. This spider makes thick webs with the funnel neck back into a wall crevice and broader mouth opening into a room. Hobo Spiders are found in moist areas of basements, garages or cellars, in ground level window wells, and so forth. This spider is about a ¼ to 5/8 inches in length, of brown color with a distinct pattern of yellow markings on its back. 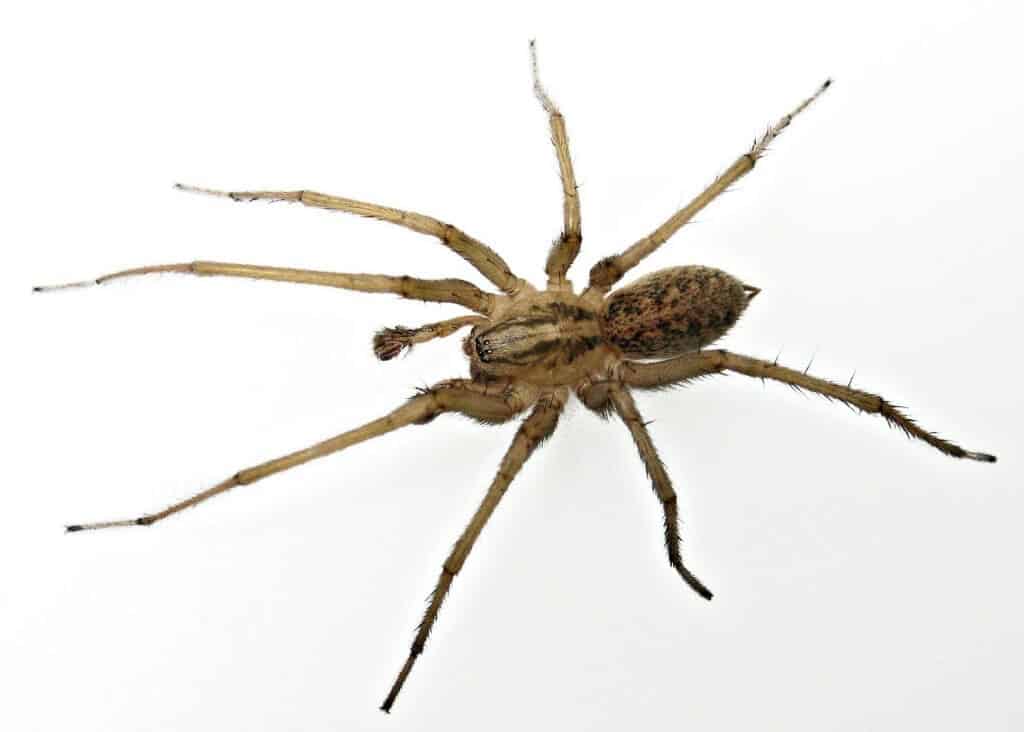 The hobo spider venom is a necrotic type that can cause tissue death and sloughing of the skin next to the bite. The wound can require up to 6 months to heal. On a spider bites pain scale, the hobo spider rates a six and on the skin damage scale the level is three.

What to do if bitten by a hobo spider:

Preventing spider bites by hobo spiders requires some simple, common sense measures. Wear protective clothing, including long sleeves tucked into gloves; long pants tucked into boots, and coveralls or a jacket with a hood. Wear gloves when working outdoors in potential habitats such as rock gardens, and when moving leaves or wood.

Hobo spider bites occur in bed when the sleeping person inadvertently rolls over or simply touches a spider. Hobo spiders usually get onto your bed by climbing up bedspreads or other linen which touches, or is very close to the floor; they are not proficient at scaling slick surfaces, such as polished wood or metal bedposts. Keep your bedspread at least eight inches above the floor.

The sac spider, also known as the yellow sac spider is found throughout North America. It is often misidentified as the brown recluse spider. These spiders are tiny, about ¼ inch to 3/8 of an inch long and have no conspicuous markings. 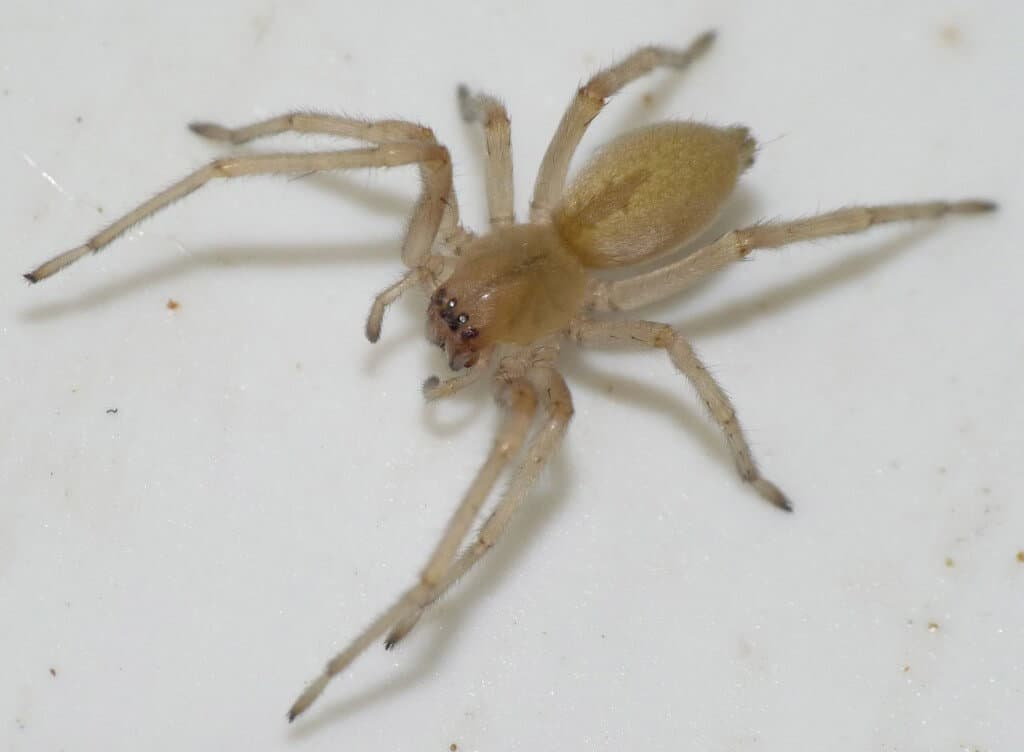 The front legs of the sac spider are longer than the rest of their body and legs. The color varies significantly among the species of this family. They are very pale and can be yellow, greenish and tan.

Most bites occur at night due to their nocturnal habits of emerging at twilight from their silken retreats to hunt their prey. You can find them inside running up walls at night. In the morning they drop to the ground and construct silken sacs in protected areas to rest in.

On a spider bites pain scale, the sac spider rates a four and on the skin damage scale the level is five.

What to do if bitten by a sac spider:

Preventing spider bites by hobo spiders requires some simple, common sense measures. Vacuum regularly and adequately install glue traps, duct tape (sticky side up) or double-sided carpet tape. Keep bare hands out of places that you cannot see, and do not use bare hands to turn over possible hiding place.

These are large, hairy running spiders with eyes in 3 rows; the first row has 4 little eyes and the 2 other rows have 2 large eyes each. They are typically found outdoors, throughout North America (more than 100 different species) and they require a consistent source of moisture. 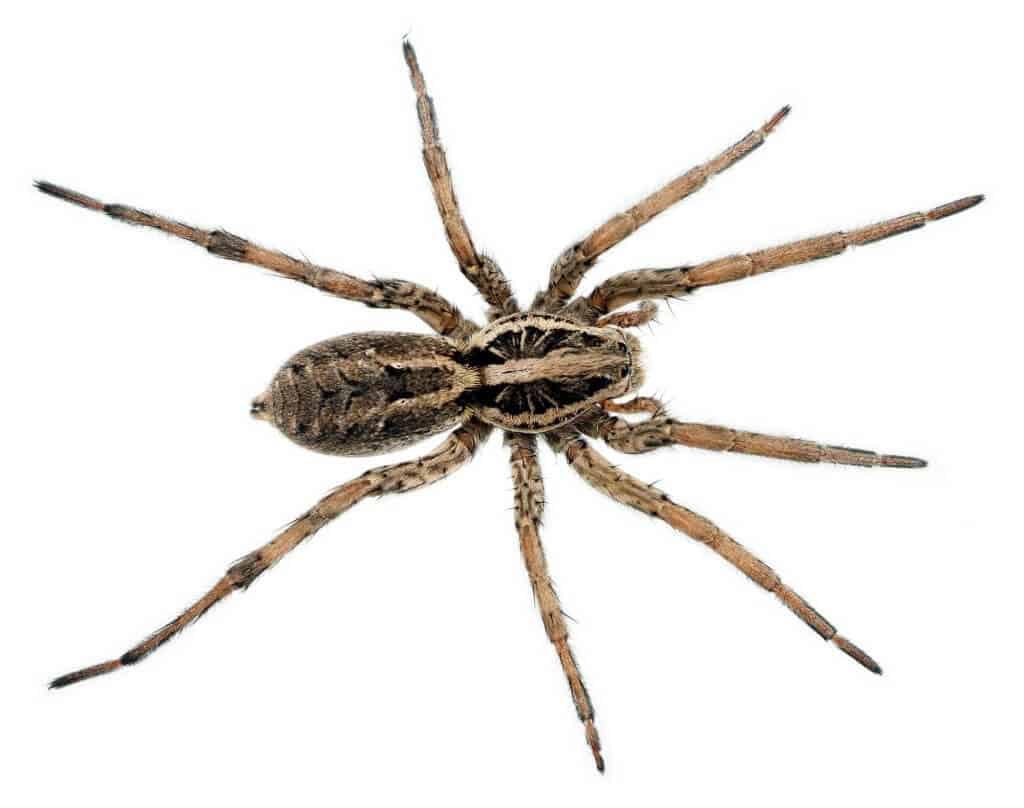 They are very common outdoors under leaf litter, rocks, and logs. These spiders look creepy, but they are harmless. You will feel the spider bites because of their large size. Wolf spiders they tend to stay at or near the floor level, especially along the walls, under furniture and other objects. On a spider bite pain scale, the wolf spider rates a four and on the skin damage scale the level is four as well.

What to do if bitten by a sac spider:

Try using glue boards or duct tape (sticky side up) to trap these spiders and adequately install air conditioning, dehumidifiers, and fans.

Parson spiders are commonly called the eastern parson spider, after the abdominal markings resembling an old-style cravat worn by clergy in the 18th century. You will find these spiders mainly in Central USA, with finds stretching from North Carolina to southern Alberta, Canada. 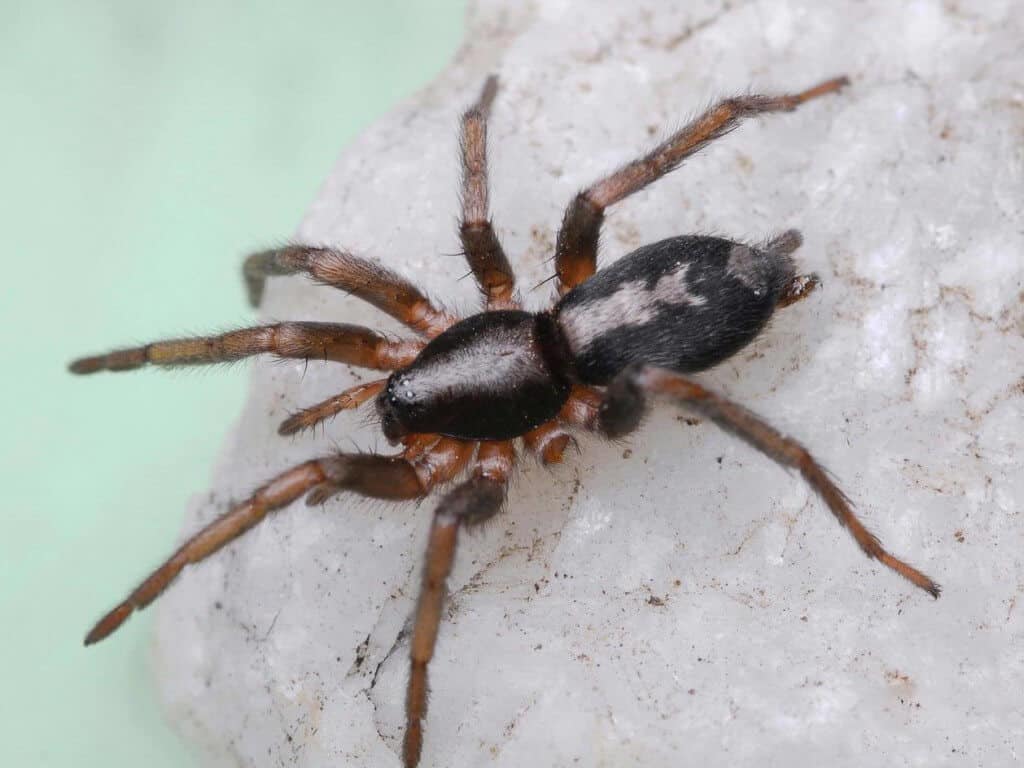 Their appearance varies from a brown head to a black or gray thorax. They are ½ inch long and have a distinctive white or pink pattern on their middles. Parson spiders are covered in fine hairs and have a velvety texture. On a spider bites pain scale, the parson spider rates a two and it doesn’t produce any skin damage.

What to do if bitten by an eastern parson spider:

Keep this in mind

As a primary rule in spider control, general sanitation and habitat modification both indoors and outdoors are fundamental. Here are some other suggestions to prevent spider infestation:

I recommend printing this spider bites guide and keeping it in your survival folder (do not forget to laminate it to protect it from getting wet!). Chances are you will encounter one of the spiders listed here and it is better to be prepared if you get bitten. This spider bites guide covers all you need to know. I advise you to sick medical help when bitten by a dangerous spider.