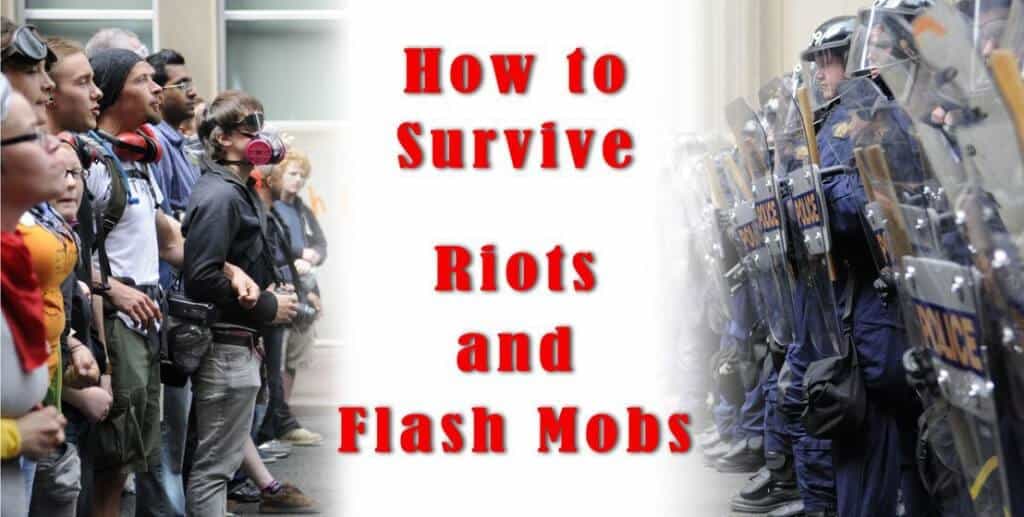 You’ve seen it on the news and you’ve seen it in the newspapers. When a disaster occurs, riots and flash mobs are forming everywhere and it spreads like wildfire. During any type of disaster adrenaline and instincts will take over and there will be no more room for logic when people are desperate to survive. People are getting trampled or attacked while trying to get away from the flash mobs. Knowing how to survive during riots and flash mobs is a skill we should all learn.

Today it takes little to start a riot in America. If you’ve watched the news lately, you’ll know what I’m talking about. Anything from economic collapse to police brutality can create the perfect background for riots and flash mobs.

It’s like people are eager to pick up a fight and any pretext will do, they will riot and loot like there is no tomorrow. Without knowing it, you could find yourself in the middle of it all. If that happens, you have to be ready to act and put to good use the following strategies.

Almost all riots and flash mobs follow the same pattern. The strategies described in this article can be applied to numerous situations as long, as you don’t panic.

Avoidance will save you

The number one rule to surviving riots and flash mobs is to avoid the crowd at all costs. Most people fail to do this because curiosity takes over and they want (need) to know what’s happening.

Of course that if you live in a crowded or contained area when a disaster strikes, you’ll have to struggle twice as much and your odds of survival will depend on your environment. Even so, you have to look for side exits or areas that will be less visited. Do this because the “heard” always follows the same pattern and heads towards one area.

Pay attention and look for alternative exits. Stay calm as you don’t want to get lost while looking for an exit, especially if you are in an area or building that you don’t know. Take a deep breath, count to 5 and evaluate your best options to avoid the crowd.

If things go bad during riots and flash mobs, you should go with the flow

It might sound strange, but if you are caught in a flash mob don’t try to fight the flow, but rather go with it. If you try to fight it, you will be trampled to death. You will also be attacked by the crowd as they will see you as a threat.

You’ve probably seen it on the news when one tries to fight back, he is being attacked and dominated by the crowd in seconds. Everyone will take a turn at hitting him or her. You don’t want to be in that position.

You may succeed to go through the crowd if it’s just a dozen people. However, during those times it will be difficult to estimate the number of people rioting. Not to mention that riots and flash mobs can increase in size exponentially. If you want to survive and stay in good health after, it’s recommended to go with the flow. Take your chance for the next exit as soon as you see it.

What you should read: How to Survive Martial Law

There is also another thing you should keep in mind. Do not get yourself lost and go with the flow all the way, because you want to survive this and not see how it plays out.

Most psychologists warn about the adrenaline discharge that takes place and the effects it has on an individual during riots or flash mobs. It seems that people act like they are on drugs and they try to dump all their frustrations on a “common enemy”. This is why mobs grow so fast and can become dangerous for bystanders.

Identify any bottlenecks and be prepared to act

The number one cause of death during riots and flash mobs is getting trampled to death. This happens when you try to fight the crowd or when there are clashes with police forces. It is a common occurrence when the crowd pushes forward or backward, trying to escape.

When hundreds of people are fighting for their lives they will do whatever it takes to go through that narrow alley or go through a door. Here is where your problems start.

First, make sure you spot in advance the possible bottlenecks and do whatever you can to stay on your feet. The next thing you want to do is to stay away from the center of the crowd since that will be the place where all the force will concentrate. Try to get on the sides and go through the exit when you have a good chance.

Don’t be caught off guard and assess the situation in advance before a bottleneck will form.

When riots and flash mobs break out, rules no longer apply. Everything is yours for the taking or at least this is what the looters think. It turns into a general free-for-all and stores will be the first places to get looted, since people need liquor cigarettes, jewelry and electronics.

That’s right, they don’t need food and water since these items are never stolen and are completely ignored. Rioting, for some, it’s just a good excuse to get their hands on a new TV. They don’t care about what started it, about the cause people are fighting for, they are plain vultures. You should avoid these places at any cost, especially if you are caught downtown.

Related reading: Items you should have for bartering.

There were cases in which people were caught in the middle of riots and flash mobs. All of this because they’ve seen on the news the unfolding events and they went out to get some food and water supplies. It’s like people are looking for ways to diminish their odds of survival. This is another good reason why you should have stockpiled food, water, and other items you might need.

Do this in advance and don’t wait for the last minute. If you are caught in a crowded area and the mob is starting to loot, that’s your chance to get away from the crowd and head home. Don’t stay around to check out how things go. You will be treated as one of the rioters when hell breaks loose.

Don’t fight the crowd during riots and flash mobs

Fighting a crowd, it’s always a bad decision. It’s not like in the movies, you’re no superhero and you will be overrun by the mob. Even though adrenaline will flow through your body and you are pissed because someone hit your car or said something wrong, stand down and keep your calm during riots and flash mobs.

Violence will break out if you try to fight them and your chances of survival will be gone in seconds.

You might think that you have all the right to defend your propriety, and you do, but the crowd will see you as a threat. They will do everything they can to eliminate you.

You’ve probably seen cases when violence breaks out even during Black Friday. People were shot over a toy, think about if the scenario is much worse, what will happen then? It’s better if you take the safe path and don’t fight the crowd during riots and flash mobs.

Don’t help the others, it might be too late

It may sound harsh and you can condemn me for writing this. However, statistics show that most people die during riots and flash mobs because they try to help others.

Good Samaritans try to help the ones who fall on the ground. As a reward they get pushed and are being trampled as well, it creates a bottleneck and everyone will perish. You have to understand and accept when it’s too late to aid people. Think of yourself if you want to survive this.

Sure the situation may change if you are with a friend or a member of your family. You can avoid having to save a loved one if you do the following: stay away from the center of the crowd, protect the kids with your body if you are being pushed, don’t lean down to help someone get up, but rather pull the person towards you while making sure you stand firmly on your feet.

Nobody can tell you what type of person you should be. You can act as you consider during that time, but you must keep in mind that you have to survive as well, otherwise everything you do will be in vain.

You should have backup escape routes

This is a general rule when it comes to having an emergency plan since each emergency plan needs to have multiple escape routes and meeting points. Most preppers know that choosing only one route to their evacuation area means cutting in half their chances of survival.

This goes the same about trying to escape from riots and flash mobs. You shouldn’t have only one route of escape since probably that will be the most popular route and it will be blocked by traffic.

I’ve written in a previous article about knowing your city and conquering it. If you want to survive when bugging out, it is the only option. Having multiple escape paths and routes when planning your evacuation, it’s a must. You should do your homework in advance and not wait for riots and flash mobs to test your escape route.

Recommended reading: How to survive as an Urban Prepper.

You’ve got home safe! Don’t relax just yet and keep the fort down.

If you’ve put this knowledge to work, chances are you’ve escaped the riots and flash mobs and you made it home to your loved ones. But unfortunately, it’s not the time to rest on your armchair and enjoy your favorite beer, it will have to wait. Once you are home you have to make sure you keep it safe.

Tune in and listen about how the events are developing and where is the mob heading. It’s near your area, should you be worried about it?

If you have a nice house, for the looters, it will have the same effect as a general store, free-for-all once again. So you need to make sure you can defend your home if it comes to it.

Also, make sure you have all the supplies you need to ride out any riots or flash mobs. As I said before, going to the store is not an option. Hold the fort down for as long as it takes. Chose to bug-out only if your life depends on it.

Prepping is not only about stockpiling food and water, or learning how to shoot with a firearm. It’s also about gathering knowledge on how to survive during various scenarios, about learning new skills and practicing them. Riots and flash mobs can be as dangerous as any other disaster for your family. Especially if you don’t know how to act and how to deal with the unfolding events.

Educating yourself and learning various survival strategies will increase your chances of survival and at the same time will improve your prepping skills.