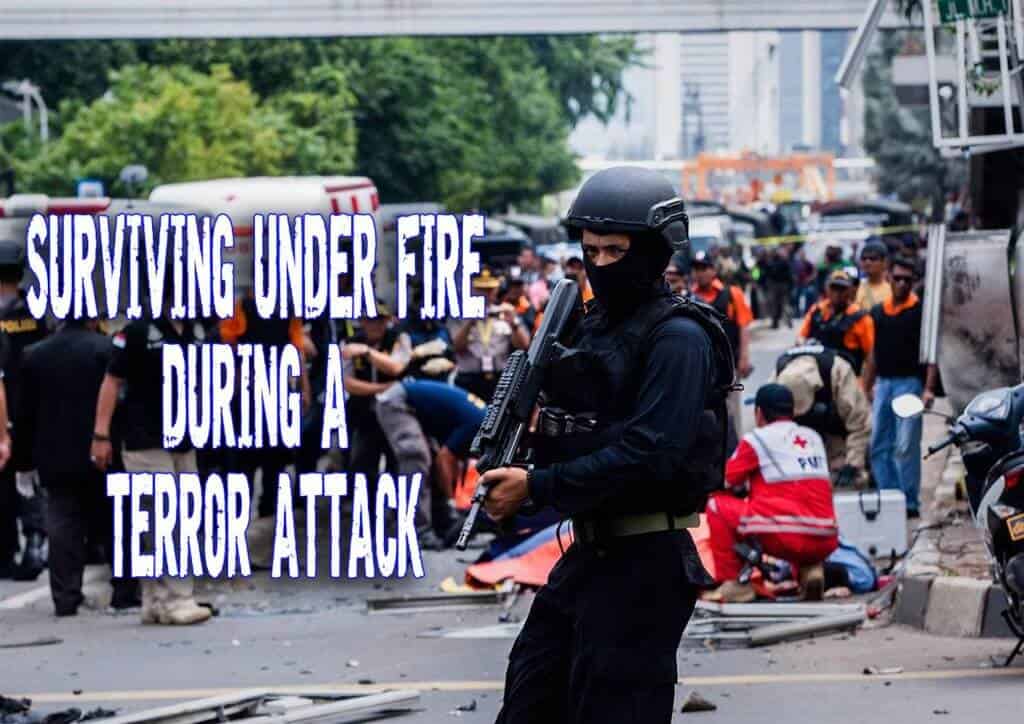 There are many, many different ways for an act of terrorism to arise right before your eyes. As always, preparedness is the key ingredient for surviving such an experience. Terror-like lash outs can occur in many forms.

From planted bombs to hijackings and kidnappings, simple preparation can save not only your life, but others as well, should you ever find yourself up the proclaimed ‘Schitts Creek’. Paddle or no paddle, a small amount of know-how can carry you through any situation.

One of the most common ‘acts’ of terror, right alongside hidden bombs, is their use of firearms. These firearms are typically fully automatic weapons with high capacity magazines, but can range from a simple knife to half an arsenal. These weapons of choice can only be used at relatively close range.

Back to the point, that you should include, in your precautions against terrorism, the knowledge of how to conduct yourself when imperiled by an armed person.

Knowing how to react to shots fired can help save lives if you are ever caught in any similar situation.

Always remember, the cliche ‘movie-effects’ and impressions that are given about guns are strictly false, and only for the silver-screen. They have bleek bearing in reality.

Never attempt to be a ‘hero’.  If you are affronted with a gun, and have not had proper training, it is best to take everything slow, and avoid interaction. It is more likely that you may bring more harm to yourself and others.

In the common commotion of, say, a large shopping mall, the sound of unannounced gunshots may go completely unnoticed. It is possible that you may not ever hear the bang of the firearm.

The noise of a crowd can often muffle out the sound of a shot, making hard to recognize. In some situations, it is possible that you may not see the gun or the effects it is creating in the crowd.

Focus on the directional flow of panic, and gracefully make your way away from the arising situation.

In the event that you do hear gunshots, drop to the floor at once, without delay. Advise anyone around you, who may be clueless to what is happening, to do the same. Cover your head with your hands. Getting into a protective position will make you less of a target. It can also save you from any ricochets or flying debris.

If there is any cover or places to hide, use them. Analyse the situation from cover. If an evasive move can be safely made, exit the situation.

Be Compliant, Life Goes On…

Never, if in small or close quarters, move unless the attacker(s) have commanded you to. Your best defense in a situation involving an armed attacker is to do exactly as you are told. This will give the attacker(s) no reason to act erratically.

An attacker who has already killed or wounded someone is likely to be very edgy or jumpy. The slightest wrong move on your part may invoke them to fire. The slightest squeeze of the trigger, and it could be the last breath of your life.

***Never risk your nor anyone else’s life in any situation. Without proper training, you are more than likely going to put you and those around you in harm’s way.

Help is On The Way

In most cases, word of any hostile situation will get out fast. Before the situation is turned to a complete tragedy, someone is generally alerted of the situation.

Anti-terrorist and many security personnel are typically trained to disarm an attacker. Remain calm, motionless and extremely close to the ground. These procedures may be extremely vital if gunfire is to be returned by anti-terrorist or military personnel. Crossfire can often become a danger during these types of situations.

Never jump up in an attempt to run if a shootout is happening. In the case that the attacker has appeared to have been shot or disarmed, DO NOT move until you are specifically told to do so.

Observing From the Outside

If you ever find yourself outside an establishment, just happen to be passing by, and witness an act of violence in a building, there are specific ways to handle it.

NEVER enter the building or area where the act is happening. Dial the police immediately. DO NOT hesitate. Once you are on the line with the police, if you can still see what is happening without endangering yourself, do not hang up.

Continue to explain the situation as it continues to unfold. You may be asked to hang around to provide a written statement as to what you witnessed as an accurate evidence.

If you happen to have a camera or your cell phone on your person, snap pictures of what is happening as well.

In all scenarios, remember to be smart, diligent, and confident with your each and every move.

Article written by Jonathan Blaylock for Prepper’s Will.

Hello guys, Jonathan Blaylock here. I currently write for Planet Camping on a range of outdoors subjects, with survival being a current focus. I have had peculiar interest in nearly everything survival since a young age. Not always in the typical, cliché boy scout sense, but more on a revolutionary way.

I often ponder what percentage of us would actually make it, you know, if anything ever does go awry! As I am a part time nomadic dweller/traveller, learning to survive, in all detects of the word, has been a top priority! I want nothing more than for my words to give some sort of guidance to those already ‘aware’ of their surroundings. Happy Living!