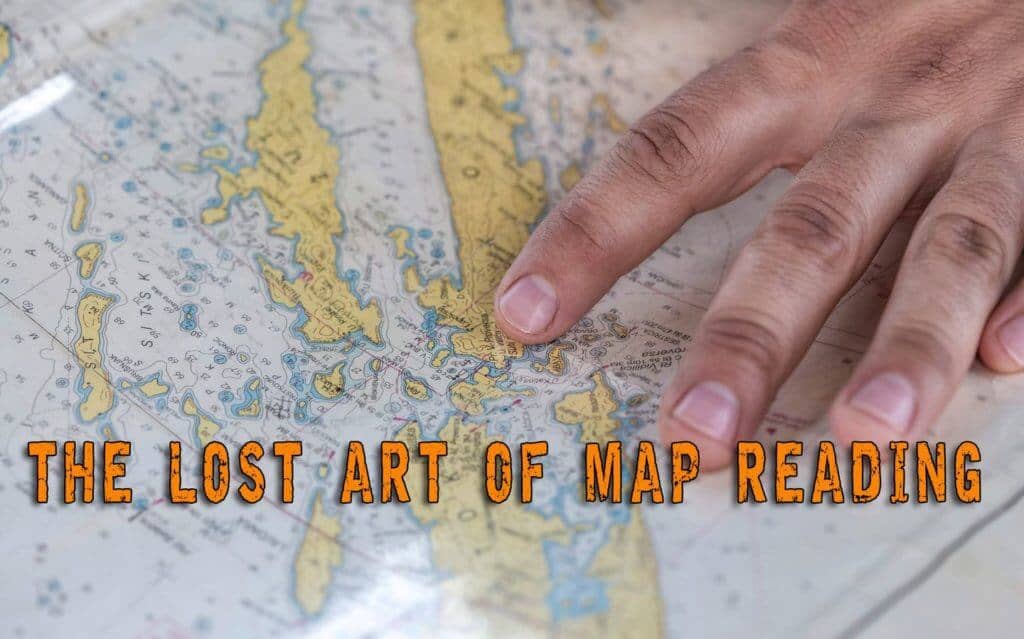 We could start this here article with a big long section on the importance of understanding how to read a map. However, I fear that that would take up every bit of the word count I have available. The number one reason, I am sure we preppers are all aware of, is the fact that with a grid fall (how unlikely is that…laugh out loud…) would take away our little magic abilities know as cell phones and GPS.

Sure, a satellite GPS may work for a while, but when the juice runs out, and there is nothing more to restore said juice, well, you’d be SOL when SHTF.

Map Reading for the Bush Man

Those still exist? Yes, and they are your only sure fire way to navigate the land surrounding you (aside from using your natural given senses, of course, but that is a topic for another day). We all understand the ease at which our electronic navigation systems and cell phones will eventually fail. This fact alone makes the skill of map reading dire to us all.

A map is, in simple terms, a picture on a piece of paper that is made up of signs and symbols.

In order to read a map, one must learn all the various signs and symbols that form the map.

In addition to the signs and symbols (which typically look exactly like what they are representing), a map is made up of particular lines.

To start, there are “main lines” that make a general pattern across the map. These main lines stand for important landmarks; such as railroads, fences, roads, and streams.

Signs on a map may include representation for mines, schools, buildings, churches, hospitals, windmills, oil tanks, cemeteries, cultivated fields, grasslands, swamps, orchards, woods, lakes, or ponds (understand that these are only a few, and that most maps will come with a map key that tells what each symbol represents).

In conjunction with these lines and signs, there are also important colors that are specific to each one:

Add all these signs, lines and colors to a map and you have yourself a basic land picture to follow.

However, a completed map isn’t quite that simple…

There are a second set of lines that you will see covering a good, topographic type map. Without them, you have a simple, “flat” map, as described above. It is here and now that map reading will get a bit more in-depth.

Elevation and contour lines represent the elevation and shape of the terrain. Meaning, once these are added to our map, we can understand not only where, say, a hill is, but exactly how high it is.

Each map will have a contour interval (which depends upon the map being used), made up of evenly spaced lines showing only certain elevations. The margin of the map will show the specific contour interval for it.

Being that our map is now a true picture of the land, distances can now be measured out. By scale, a map will always tell you how much smaller it is than the real land. There are two ways that a map can indicate this:

A map will tell you how much smaller a distance is than the actual ground by means of a number found in the margin. This number is the scale of the map.

Here it is important to know how to change inches into other units of measure because ground distances will not typically be given in inches.

A graphic scale is basically a ruler that has been printed on the map. There are two parts to a graphic scale; to the right of the zero it is marked in full units of measure (primary scale) and to the left, it is divided into tenths (extension scale).

The best thing about a graphic scale in comparison to a regular scale is that has already done all that stressful arithmetic for you.

There are typically three graphic scales used on it, allowing for different units of measure to be used. They are regarded as miles, yards and meters.

To use these scales on a map follow this procedure:

Place a straight strip of paper along the part of the map you are measuring. Place a mark on the paper of each end of the distance to be measured. Now move the paper to the graphic scale, and it will tell you how long the distance really is.

To measure a curved line (since we know there are hardly ever straight lines to be traveled in the wild) simply divide the curved line into straight sections. Then lay the edge of the paper on the tick marks, adding each section to the ones already marked. The end result will be a straight line on the piece of paper which in turn can be measured on the graphic scale just as before.

It is extremely important to pay attention to the fraction used on the map. This can become a bit tricky if you don’t pay adequate attention to what you are doing. 1/25,000 of something is bigger than 1/50,000, for example. It is critical to get this part right, as you can surely tell.

A bearing is simply a measurement of direction between two points.

Your compass may be in either form, an azimuth or a quadrant style. If it is an azimuth and you have been given a quadrant bearing, you’ll have to divide it into quadrants in your head. As the same must be done if you have a quadrant compass and are given an azimuth.

It is not a difficult feat to simply become lost out on the trail or in a foreign area you aren’t familiar with. But fear not!

Believe it or not, you can actually determine your precise position quite easily on a topographic map by using your compass to calculate between three points (and this skill can be of exceptional importance).

First, pick three topographic features on it that you can see with your eyes in the surrounding landscape (large mountains are ideal). Begin with the first feature that you have chosen and determine the bearing between you and it. Next, pencil in line with the same bearing on your map that runs through the chosen feature.

Repeat this same step for the other two features. The point at which the three lines cross on the map is where you are. Accuracy is important here, as the accuracy of your sightings and of your pencil marks can determine how close or far off you are with your locations. Remember to check and recheck the map and placate it with what you can actually see. If the lines intersect on a hill, but you are in a valley, your location is obviously a bit off on the map.

When first looking at a topographic map, it may appear downright confusing and not very useful, however, that assumption is entirely wrong. Understanding the skills of map reading can most definitely save your skin when s finally hits the figurative fan!

In part two of this article, we will discuss how to use a compass and a map together.