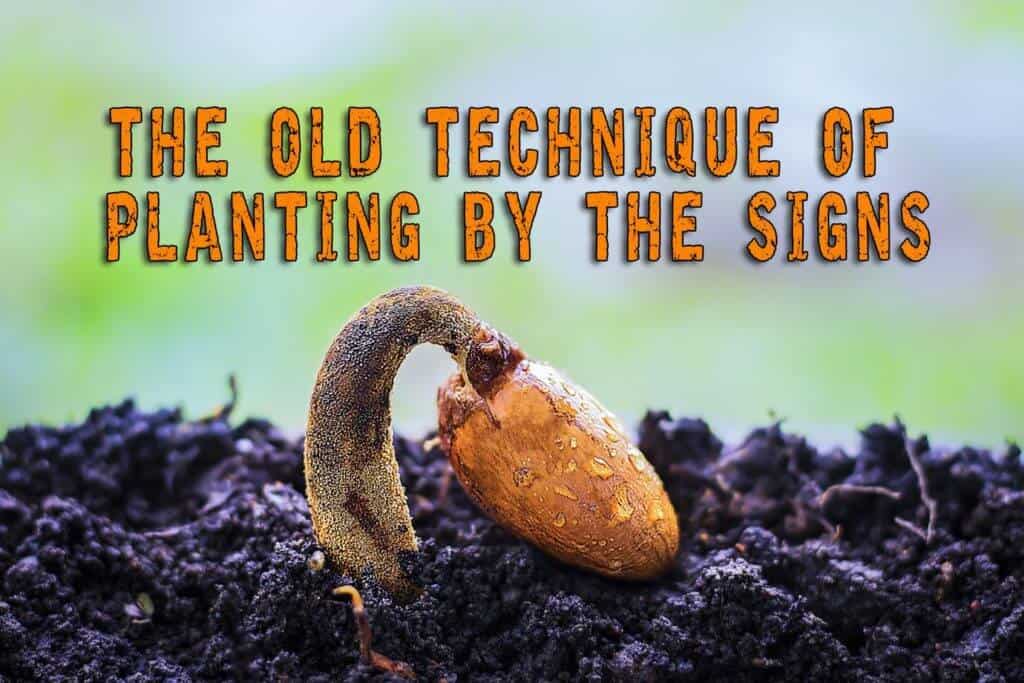 It’s about damn time that we begin to realize all that we’ve put out of whack in this great system we are part of. Using old hacks like planting by the signs in this modern world seems a little odd, but is it really? Our ancestors did it with great success and they left us the knowledge to use their techniques for a truly self-sufficient life.

Off-kilter indeed. Look around at our self-acclaimed “improvement”. So far advanced, in fact, that we’ve come to the end of natural experience and are well on our way to entirely becoming one with the ever-growing, grid-like “internet” realm of reality. Literally on the path to having external bodily experiences.

Anyway, what the heck does that have to do with gardening? Isn’t that why we are reading this? It is. I’m getting at the pure essence of gardening, the marrow of life in general, at least life in OUR realm.

Here we are going to look at one of the oldest gardening “hacks” (I hear, it is supposedly necessary for writers to get any attention without using “modern” terminology, ha!) in, well, in existence, I surmise.

These “secret” sign techniques can be found in the poet labyrinth of your local Farmer’s Almanac. The big mystery is no big mystery after all, as it is simply based on the nature of nature, shared amongst all of the living world. Right about now it’d be enjoyable to make a fuss over that beautiful yellow fellow known as a honey bee, and his oneness and wholeness and place in this nature we reside in.

All creatures were meant to be that, a part of something bigger (and for obscured reasons, humans had received a major upper hand). However, we took that power and busied ourselves with trying to “figure it all out” for enhancement’s sake.

The following methods are not entirely the best place to jump to for a super, very beginner gardener; however, we each have to start somewhere, and if you can make the jump, the water is mighty nice! It takes as much or less effort than that that is wasted in trying to keep up with the superficial, takeover culture we have shaped and formed.

Planting by the Signs:

This method is as old as time and alignment and all things sacred and holy. Through text and scripture from all ages, we can see that planting by the activities of the moon and by zodiac signs has eternally been a part of nature.

We did not choose that path, and if we don’t at least make attempts at a real change in direction, the dead-end is inevitable.

Many skeptics, in this mass-consumerism, technologically advanced day, will claim that “planting by the signs” is simply bogus, an old hoax or wives tale. But such is not the case for the masses that used this method to actually make it to the next day.

They did this to survive, to have food when it was most needed, you know, before you could run to the store real quick. Back before gluttony could even be a real thing (well, except in the rare occasion that you were a king or some sort of royalty; or had one remarkable garden).

The actions of the moon and how old-timers went about gardening often meant the difference to whether or not said old timers would survive or not. And it worked! That is truly noteworthy. The same methods have been used by fishermen alike for century upon century! (which is another grand topic of discussion for another time); as well as reading horoscopes and predicting things to come.

And the fact that we are living in some of the most tumultuous times ever known to humankind makes it a wise move to try to begin to understand how our ancestors survived simply by working with and living with nature.

It did not take the ancient astronomers long to work out that the constellations in the sky that they studied and named were equally placed along the yearly path of the great sun.

The path of these constellations creates a sort of belt, which also includes the paths of the other planets in our solar system and the moon.

They then divided the belt into twelve equal parts (each at thirty-degree intervals) and designated them signs.

Each constellation made up a sign, and therefore they shared the same name. Given that each name was that of an animal (barring Libra), the belt itself has titled the zodiac (zodiac meaning “zone of animals”).

The early astronomers and wisemen trusted that there was an internal relationship between those celestial bodies and the bodies of humankind itself. This led them to distinguish the twelve signs with certain parts of the human body. This method of thought has been used, as history shows, since as far back as 1300 B.C.

A planting chart/calendar (such as those found in the annual Farmer’s Almanac) tag each day with the sign that rules over it. They also show the assorted parts of the body and planet coupled with the sign and the element it’s most closely akin to.

There is a specific sequence, starting with the Ram and ending with Pisces, in which the signs always appear. Once Pisces passes, the Ram appears again, starting a new succession.

The most considered “best time” to do any gardening activity is when a day falls on both a good sign and an agreeable phase of the moon.

Let it first be said that, though the specifics can be quite intricate, the overall gist of planting or simply utilizing the signs is fairly cut and dry. You can delve as deeply into the vastness of reading the signs as you will allow you, all the way down to the minute, in fact.

Here and now, however, we’ll solely dabble in the “cut and dry” to show the nature of the arrangement.

It seems that planting by the signs began to die off just around the same time as self-reliance. We began to modernize and mass produce. Growing what you needed only fell off quickly while the progression of the assembly line, skyscrapers and grocery stores rapidly increased.

It is even clearer that we may have taken the wrong split in the path of expansion seeing as how Mother Nature is finally beginning to growl and snarl back. She’s been treated like the proverbial red-headed stepchild, and she strikes with a mighty vengeance.

If you are reading this, you obviously have some sort of interest in gardening, whether beginner or ole salty dog. Keep it up and share the knowledge of self-reliance, open up the wells of wisdom for the thirsty.

Get into gardening to help restore the balance that is so far out of whack; end overconsumption and give back to nature!

Get with the times, and grow by the signs.