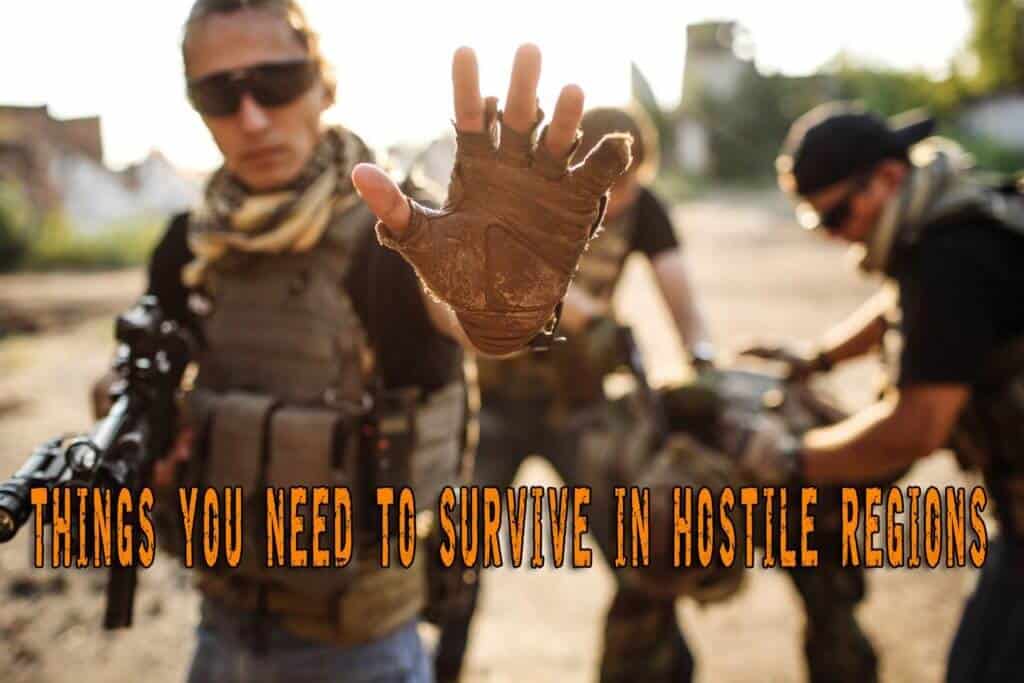 When traveling to foreign countries, there’s always the risk of things taking a turn for the worst.  With the ever-increasing surge of terrorism and international drug cartels, you never know how you may end up in the wrong place at the wrong time. Personal protection is a necessity for westerners who work or vacation abroad, that of course if they want to survive in hostile regions.

I’ve traveled a lot around the world providing protection and training for clients working in hostile regions.  I’ve also had the pleasure to work with quite a few experts and attend to various counter-abduction courses and escape and evasion classes.

Every time I find myself in a country that’s seen as a “shithole”, there are some precautions I need to make and I always make sure I have some vital items. However, before we start listing things that should be a must for you in hostile regions, we should establish if your destination could be classified as a sketchy country.

There are a few things you should ask yourself before buying the tickets and boarding the plane. Here is my ABC for safe traveling:

A. Is by any chance the government of the country you plan on traveling to tyrannical? Are they oppressing people based on their beliefs or gender?

C. Does the region in which you will be staying have a noticeable problem with people being assaulted or kidnaped?

If the answer to any of these questions is yes, then we can both agree that the region you plan on visiting is hostile. It can range from anything such as “let’s rob this Gringo” to “slay the infidel”. If you still have to go there, you should need prepare accordingly. However, I must warn you that not even with all the preparation in the world, your trip is still a roll of the dice regarding personal security and survival.

My initial advice would be to avoid such places, but if that’s not possible, here are a list of things you must have for hostile regions. If you are required to travel to hostile regions, you should make sure you have a trained companion coming along. This is one of the best ways to minimize your risk of getting kidnaped or worst when going abroad.  I’ve often traveled with someone who knows the region, knows how to defend himself and others and has access to needed resources.

If things take a turn for the worst, you should have the piece of mind that your companion knows how to fight, and fight well. You need to travel with someone who has your back. Otherwise, you might as well be traveling alone. The good thing is that some companies do offer this type of protection and they won’t let their employees go in hostile regions with just their pecker in their hands.

In most kidnap cases the enemy has the element of surprise and that’s why the success rate of such actions is high in most 3rd world countries. The best thing you could do would be to surprise them back by having some combat training or a hidden weapon. Some self-defense tools can pass through most security checkpoints without a problem.

My personal favorites are the self-defense rings, available in all kind of shapes and designs. These small tools can make serious piercing and tearing damage and the best thing is that it’s always on your hand.

Whatever your option is, make sure the item you carry doesn’t look scary since it will ruin the element of surprise. The local laws may not be so permissive about hand to hand weapons, but an inconspicuous ring won’t raise any eyebrows.

Related reading: How To Build A Travel Bug Out Bag For Voyagers

If you can legally obtain a gun, you should do that immediately. In some countries, it may be difficult to do so or even impossible if you go on the legal path. However, if you find yourself in a country where entire cities erupt in violence and bullets start flying as the government is being overthrown, you should have some options. The best thing you could do is develop a relationship with the locals so that they can provide you with the needed firepower in case needed.

From personal experience, I can tell you that in Africa and a few East-European countries was the easiest for me to develop relationships with various individuals that could get me and my team-members the weapon we would need in a couple of hours. In Ukraine, I could get a few AK-47s in less than two hours.

In certain hostile regions, cell coverage is basic at best and you will be cut out from the world if you don’t have any other option. Me and my team, we always carry an Iridium satellite phone that we use in emergencies. These phones are not cheap, but they can save your behind when things get sticky.

A good satellite phone will set you back about $1,000 and a pre-paid SIM card with 60 minutes or more can be bought for $100. Think about it as your life-line because I can assure you that in certain areas overseas, your phone may not have service.

Forget about the shiny new iPhone and get yourself a sturdy smartphone that can handle abuse. You need something that is dustproof, waterproof and can survive a high fall. There are certain smartphone models designed for rough areas and hard working conditions. These are the ones you should target if you plan to go in hostile regions. These type of phones have all the apps and tech capability of the stylish models, but they are much sturdier and their battery lasts longer.

I teach my clients to carry a decoy wallet in their front left pant pocket with fake IDs and petty cash for bribes.  If you get robbed, you will give them the decoy wallet without losing precious resources like your passport or cash reserve. Some people prefer to carry decoy wallets that are shiny and made from nickel or other materials that have a distracting feature. These are designed to catch the eye of the thief so that you can apply a good sucker punch or kick.  However, there’s no point in escalating the situation if you are not properly trained to defend yourself.

In 2011 I had to “babysit” an IT Manager in South Africa and we often had to stay in regions that were not on the safe zone map. He was suffering from a serious medical condition and he was afraid of losing his medication that he brought up from the states. The guy was constantly worrying about it being stolen from the hotel, from his bag and so on. He managed to calm down only after I gave him a covert safe. A can of shaving cream with a hidden compartment that could house his pills and ease his worries.

These small covert safes are ideal to keep valuables and thieves won’t be lured by these common looking objects. They will never pay attention to those items and they will look in places where people are usually hiding their valuables like under a mattress or under the drawers and other common places.

In most underdeveloped countries, communication is the first thing that fails you and it’s something you need to prepare for. Your sat phone battery may die, and all your other gear that operates on electricity may go to sleep. However, the sun will never fail you and it will recharge your devices if you have the right equipment.

I recommend leaving behind rigid panels since they are too bulky to assure proper mobility and they are also prone to damage. Get something flexible like the Bushnell’s Solar wrap since this charger can roll up in a compact tube, and you can wear it anywhere without having to worry about it breaking.

Although anyone in the world may accept U.S. dollars, there could also be exceptions. You may not find an exchange office or you may be forced to use local currency, to avoid being charged with doing black marketing. Always change your money at authorized offices of exchange and avoid private money changers at popular landmarks, hotels and other points of interest. However, if by any chance you are left without any cash and the plastic card becomes useless, you should have some alternative methods of payment.

Jewels and other valuables can be traded for goods or services or pawned as a last resort. Even some of the gear you have can be traded for money. Water filters were seen as high tech, priceless things in Africa and I often had people offering to buy my water filter and water canteen.

I have some colleagues who did some protection work in Afghanistan and they used to give fidget spinners and all sorts of flashy, cheap toys to kids to obtain information. In exchange for these small bribes, they were able to obtain various information like who was running the village, if the water is potable, if there are “bad people with guns” in the area and so on. Anything can become a bartering chip if you’re in the right or wrong place.

Before you go to hostile regions, make sure you learn a thing or two about that region. We always did our homework and we tried to learn as much as possible about the locals, their culture and habits. Each country has its own moral code and rules you need to follow. Surviving abroad requires for you to learn what is and what is not acceptable behavior. Do a little review and save yourself the later embarrassment, or even worse.  Learn at least about the basics to prevent the patently offensive behavior.

If you want to avoid paying extra for services or attracting unwanted attention, get robbed or even worse, try to dress like the ordinary locals. Even more, you can wear whatever foreigners who live in the locale are wearing. This helps you traveling light as well as in convincing others you’re not new to the place.

The top five items listed in this article are a must if you travel to hostile regions and the others are more or less equally important to stay safe when traveling abroad. If your company doesn’t offer proper protection, you are entitled to decline the task of living and working in hostile regions. You should request to be accompanied by a trained companion and make your own safety net. As you saw in the article, most of the suggestions listed here can be employed by anyone.

1 thought on “Things You Need To Survive In Hostile Regions”