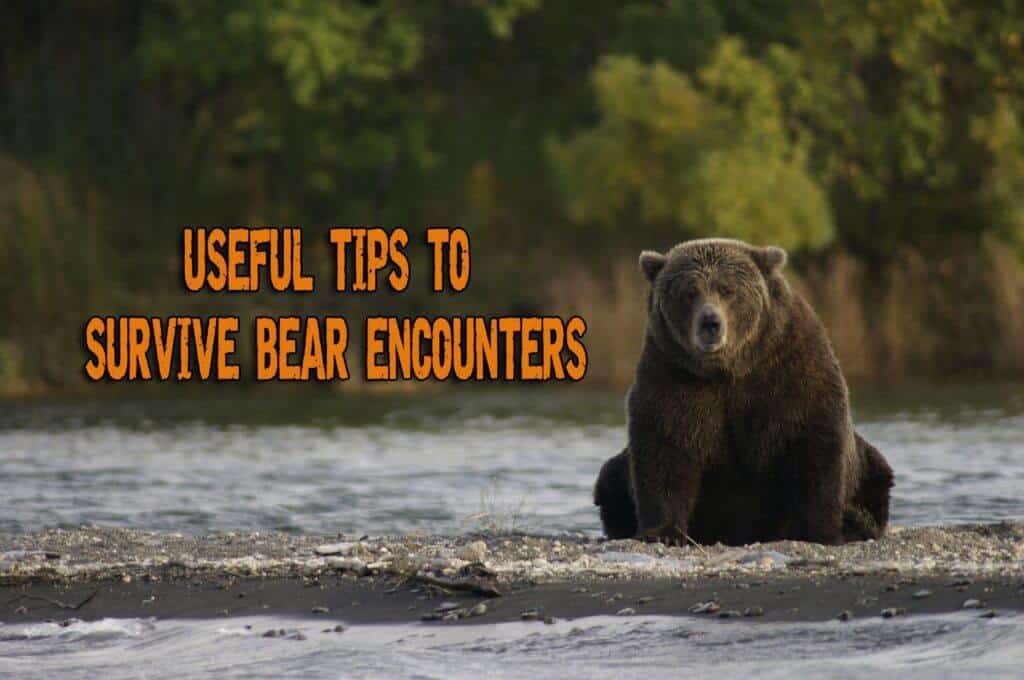 If you love the great outdoors, if you hike or if you simply ride a trail bike, you’re at risk for a potentially fatal bear encounter. While some people fear the encounter with a grizzly bear, I feel that black bears which are more numerous than grizzlies are being overlooked. They are a serious threat to life and how you react to bear encounters can make a real difference to your longevity.

It seems that every year the bear encounters are increasing in frequency and people don’t know how to protect themselves. Some end up mutilated, while others are killed by these apex predators. Also, the fact that people like to chase the unknown and discover the wilderness also contributes to human-bear encounters. There’s nothing wrong in wanting to spend time in nature and discover new breathtaking places, but at least bring some protection items along, not just a camera and some energy bars.

Black bears are much more aggressive than brown bears. A brown bear will walk away if you remain motionless and do not pose a threat to it. However, you must be sure it’s gone before you move again. When it comes to black bears, they will attack to make sure the threat is eliminated.

Some experts advise lying face down on the ground with your hands clasped behind your head and neck if a grizzly attacks you. If you don’t fight back, chances are the attack may be short-lived. Also, if you’re wearing a backpack, don’t take it off. It will provide some protection for your back and it minimizes injuries during a mauling.

However, if a black bear attacks you, then you are advised to kick, punch, bite and do whatever you can to fight back. You will be fighting for your life and there’s no easy way to put it. Don’t lie motionless or you become the bear’s meal.

Some people believe that bear encounters are rare and they are safe since they don’t go in the wilderness. This is far from the truth seeing that homes continue to pop up on what was once bear territory. You’re chances of meeting one increase every year due to the crazed development people are chasing after. Even more, bears that have become accustomed to human contact (those uninvited barbecue guests) are particularly dangerous for you and your family.

Contents hide
1 Hiking in bear country
1.1 How about a safe distance, is there such a thing?
1.1.1 Related reading: Critter Chaos and Dangerous Animals Encounters
1.2 In short, this is how you survive bear encounters:
1.2.1 A final word
1.3 Useful resources to check out:

Most maulings occur when people surprise a bear that is minding his own business.  Your chances of being attacked increase considerably if you encounter a sow with cubs or if the bear is near its kill zone or has food stashed nearby.  People get fascinated by the view or they are concentrating on the trail and they become unaware of their surroundings.

It is advised to make noise (sing if you will) to let the bear know you’re in the area. Chances are the animal will leave you alone without confrontation. There are even bear bells you can tie to your backpack or hiking stuff if you want to make a continuous noise.

To be on the safe side, you can also get a can of bear spray that is designed specifically to repel bears. Don’t confuse them with the ones designed for human attackers since these are much more potent. Even more, be sure you know how the spray operates and get familiar with the safety switch. You should be able to operate it in a blink of a second during bear encounters. The bear won’t wait for you to read the label and figure out how the spray works.

Another option, preferred by many, is carrying a large caliber rifle or a shotgun. This is the best protection in bear country as long as it’s legal to be carried when hiking. There are also people that carry revolvers, but you need to be sure you can count on your accuracy if you want to follow the same path. Also, when talking about firearms, keep in mind that it’s illegal to shot bears in some parts of the country and this may be only a last resort.

How about a safe distance, is there such a thing?

This depends on how the situation develops with or without your knowledge. For example, if you encounter a bear, don’t run! You running will tell the bear that you’re its meal and it will trigger the animal’s instinct to chase you down and kill you. Also, bears can run 30 miles per hour or faster. There’ no way you can outrun it, and even if you’re Usain Bolt, you won’t have enough stamina to maintain a safe distance.

Another thing when it comes to keeping a safe distance from bears is camp setting and cooking. The scent of food is a big attraction for a hungry bear. It is recommended to always store your food in bear-proof containers (no, not your car) at least 100 yards from your tent. Another thing you can do is set up a perimeter and protect it using portable electric fences. They do not require much power and once the bear bites or touches the fence, it will deter it from approaching your tent.

Since you cannot outrun a bear, you should also avoid provoking it. During bear encounters, try not to look the bear in the eyes as it may see this as a sign of aggression. Casting your eyes down or to one side will tell the bear you are not a threat since it’s a sign of submission. Your best bet is to spread your arms high and wide to try to look tall. Do this while standing your ground and back up slowly or to one side. If there are other people with you, cluster together to give the impression of a larger size.

In short, this is how you survive bear encounters:

Always be aware of your surroundings when hiking and watch for signs of bears in the area. If you surprise a bear, don’t run! There’s no way you can outrun it.

Sing, whistle, clap your hands and talk loudly when traversing bear country. If the bear knows you are coming it will leave the area.

Don’t leave food where a bear can reach it. Use bear-proof containers and stash it 100 yards or so from camp.

Get some defense items to be on the safe side. Bear sprays, electric fences and firearms can save your life. These are the best prevention items against an attack.

If you encounter a bear at close range, stand your ground and move slowly away when the bear understands you’re not a threat. Never look the animal in the eyes as this can trigger an attack.

Understand that bear encounter and attacks are different. A grizzly bear will leave you alone if it doesn’t see you as a threat while a black bear will attack you to eliminate the threat since you’re always seen as one.

If you see a bear in the distance, give it a break and walk around it. Don’t approach it to take a picture or to make a Live session for social media. The bear doesn’t have a Facebook account and doesn’t care about your likes. NEVER approach a bear.

Anytime you find yourself trekking through the great wilderness, remember to bring along your common sense and attentive behavior. Remember respect as well, as the outdoors are home to all of us, mean wild animals included. If the proper precautions are followed, often both parties (ill-placed victims and attackers alike) can escape unscathed.

It’s real life out there and all bear encounters should be handled with caution since these wild animals can easily kill you. You will encounter an apex predator and not Yogi the bear. If you don’t use your common sense, chances are you will be losing more than your picnic basket.