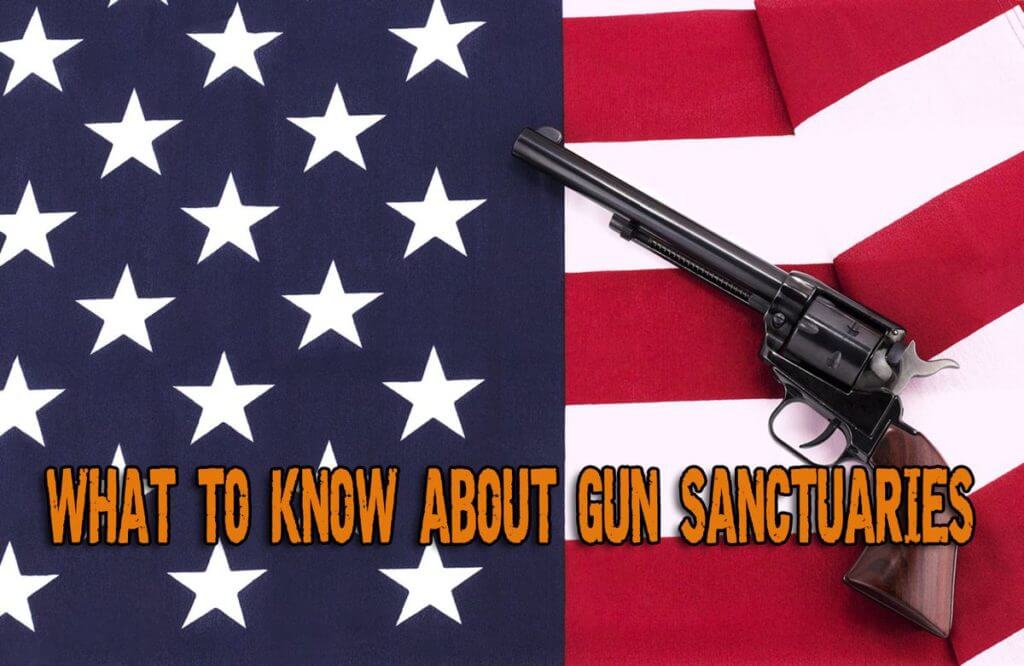 As we all know, the Second Amendment of the United States Constitution gives citizens the right to bear arms. However, in today’s world where a few bad people with guns have made national news, anti-Second Amendment activists are coming out of the woodwork. It seems like every day there is new legislation proposed to restrict the right of law-abiding citizens who want to protect themselves, hunt, or simply enjoy target shooting. Thanks to them, you will learn today about gun sanctuaries.

The citizens of some counties in Illinois have taken matters into their own hands, establishing ‘gun sanctuary’ ordinances throughout the State of Illinois.

As a gun owner, you may be wondering what these measures actually mean for your rights and if this is a model that could be used in other States often dominated by liberal, metropolitan politics.

What are gun sanctuaries?

Contents hide
1 What are gun sanctuaries?
1.1 Related reading: 5 Guns Every Prepper Should Own
1.2 What protections do sanctuary resolutions provide?
1.3 How does this work with current State laws?
1.3.1 Suggested reading: Stockpiling Ammo For SHTF – How Much Is Enough?
2 Could this be a model for other States?
2.1 Author Bio
2.2 Useful resources to check out:

This conflict between regular people with traditional values and the overreaching anti-gun activists and state legislators is especially apparent in states like Illinois. In Illinois, much of the state government and a large proportion of the voters are focused in urban areas like Chicago. This distribution of power means that those areas are largely able to control what laws and resolutions are passed for the state.

However, Illinois also has large amounts of farmland and woods, many rural communities, and plenty of people who disagree with the more liberal urban areas.

The state of Illinois has passed and is attempting to pass very restrictive gun legislation this year, and a growing number of people are coming to realize that these gun control laws are intruding on their Second Amendment rights. As a result, some Illinois counties are passing resolutions to become so-called “gun sanctuaries.” The goal of these gun sanctuary resolutions is to bypass the overreaching, unconstitutional state firearm regulations and protect citizens’ right to bear arms.

The latest moves from the Governor may have been the fuel which ignited the gun sanctuary movement.

In April 2018, the gun sanctuary phenomenon began in two of Illinois’ 102 counties. A representative from Iroquois County drafted the first resolution in a show of frustration with the state’s restrictive proposed gun laws. As of July, the number of Illinois counties who have passed gun sanctuary regulations total 26, and others are considering it or have resolutions ready to be voted on. The representative from Iroquois County was quoted as saying, “I never imagined my resolution would do what it did. I lit the spark and the fuel was already laid.”

What protections do sanctuary resolutions provide? When a  county becomes a ‘gun sanctuary,’ it is arguing for the protection of gun rights within its county limits. In many cases, the measure is mostly symbolic. The majority of the time, counties don’t have the legal authority to ignore state and federal laws (we’ll talk about this more later on).

However, that is not stopping many Illinois rural counties from sending the message to the state that they have the right to protect and defend the Second Amendment from intrusive gun control laws passed by the Illinois legislature.

In cases where gun sanctuary resolutions are more symbolic, it has not yet been tested how much protection the resolutions actually provide. However, the state of Illinois and the whole country have taken notice of how these locations are fighting for the rights of their people.

In some Illinois counties, the gun sanctuary resolutions more detailed and directive. This style of resolution likely provides more thorough protection for the right to bear arms. A typical provision in these resolutions allows county officials to not comply with state laws that infringe on a citizen’s right to bear arms in the county.

Let’s break down what this means. First, it means the county can decide a new state or federal law is unconstitutional and strips away people’s Second Amendment rights. Then, it says that county officials do not have to comply with that unconstitutional law. So in practice, this gives more actual protection to firearm owners. As an example, let’s say a state banned all shotguns. The directive gun sanctuary resolution could mean that county officials themselves do not have to follow the unconstitutional law and could keep their shotguns, OR it could go a step further and say the county police, sheriff, etc. will not enforce the law– thereby letting everyone in the county retain, sell, and use shotguns as they please.

Regardless of how many practical protections the gun sanctuary laws offer, the resolutions are gaining a lot of backing especially among people in rural areas who believe in protecting themselves or living in a traditional American way. Gun owners are rallying behind these sanctuary resolutions because they don’t want to see their rights under the Second Amendment taken away.

How does this work with current State laws?

As mentioned earlier, counties and municipalities don’t necessarily have the right to disobey state or federal law, so these gun sanctuary resolutions exist in a tricky gray area. In US law there is such a thing as “state preemption” which says that state laws must be obeyed within the state and can supersede local (city/county) law in almost every situation. Illinois, of course, has its own gun control laws, so the sanctuary rulings may not be legal, strictly speaking.

Currently, Illinois gun laws allow citizens to purchase and own a firearm or ammunition only if they have a valid Firearm Owners Identification (FOID) card. The state also mandates a waiting period of 72 hours between the time a citizen buys a gun and takes possession of it. Other Illinois laws require citizens to be at least 21 years and pass a two-day long firearm training course before obtaining state-issued concealed carry licenses.

Non-resident permits are only available for people in four states: VA, AR, MS and TX. Citizens in other states are exempted from having an Illinois FOID card if they have a concealed carry weapon (CCW) permit in their home state.

So far, these laws sound fairly typical for the modern day United States. Even if it is a headache to register your firearms and get an FOID card or if you feel it is none of the government’s business whether or not you have a gun, these laws don’t actually prevent you from having one (unless, of course, you are underage).

However, gun owners all over the state of Illinois really took umbrage with new laws the state recently proposed. In addition to existing requirements, the Illinois legislature passed bills that restricted gun ownership even more. These restrictions were passed in 2018 after the tragic Parkland School shooting in Florida. Unfortunately, for regular folks who are homesteading, concerned about the future and trying to prepare themselves with what they need, or just want to protect their family, these gun laws are extremely intrusive and overreaching.

Suggested reading: Stockpiling Ammo For SHTF – How Much Is Enough?

One bill authorizes judges the legal right to take weapons away from perceived people as a danger to themselves or other people. The weapons can be confiscated for up to 14 days. Family members, police officers and others can petition the court to have weapons confiscated from a person on one of two conditions. The person is suffering from a mental health condition or they show they pose a threat of violence. A judge could remove the weapons for up to six months.

A second bill extends the waiting period for obtaining a newly purchased firearm. There are additional restrictions on the table with the Illinois legislature, so it remains to be seen how far the state will go in removing citizens’ right to bear arms.

Without gun sanctuary resolutions, these new state laws could take guns away from owners who need them: after all, people who believe in emergency preparedness and survival often purchase guns for protection. The sanctuary gun resolution is to protect homesteaders and those who believe in emergency preparedness from losing their second amendment rights.

It’s easy to understand how county officials feel the need to place the state on notice about restricting gun rights. These new Illinois laws could restrict someone who has a criminal record or history of violence, even if it was years and years ago, from owning a gun. They could have turned over a new leaf entirely and now want a gun simply for home protection or hunting, but the new laws would make that very difficult. It isn’t right to place a blanket ban on people because of some offense without looking at the circumstances surrounding the charge.

Whether or not gun sanctuary resolutions will stand up against state law remains to be seen. Despite the precedent of state preemption, or state’s laws overtaking local laws, the sanctuary ordinances have not yet been challenged by the state of Illinois. And regardless of whether they would win against the state, these counties have sent a loud message that they are willing to protect their citizens’ Second Amendment rights from blanket anti-gun laws.

Could this be a model for other States?

In a “post-Parkland” world, restricting guns is seen by many states as more important than the Second Amendment. As long as this attitude persists, gun sanctuaries may be here to stay in Illinois and around the country. Regardless of whether the sanctuaries themselves are enforced and continue to exist, the model may work in the long run because its main goal is sending state lawmakers the message that there is opposition to their restrictive gun laws. In America, it has been a time-honored tradition to protest unfair or unequal laws, and this movement is doing just that.

In fact, many people from other states are contacting Illinois gun sanctuary counties to learn more about their resolutions. The states seeing more information include Oregon and California. Some states are seeking to model their own gun sanctuary resolutions after the resolutions in Illinois. Additionally, at least one municipality in the state of Kansas has enacted a resolution where their county officials will not enforce unconstitutional gun laws.

If states continue to restrict gun rights, this conflict between state and local lawmakers will continue. Counties can disobey the state. However, they don’t have a legal authority to disobey state laws. State preemption can occur. This is where the state can step in and enforce its laws in the county. It would not be in the state’s best interest to do this because local officials and residents know what they want in their area of Illinois. The state should take notice of the movement and make laws that protect the Second Amendment, not infringe on the right to bear arms.

This article has been written by Andrew Nickel for Prepper’s Will. Andrew Nickel is the founder of The Law Offices of Andrew Nickel, and has spent his entire legal career dedicated to all areas of criminal and family law. Prior to his years in private practice, Mr. Nickel spent nearly five years as a prosecutor in both Kane and Kendall Counties in Illinois, where he handled a wide variety of cases including traffic, misdemeanors, felonies, and DUI cases.