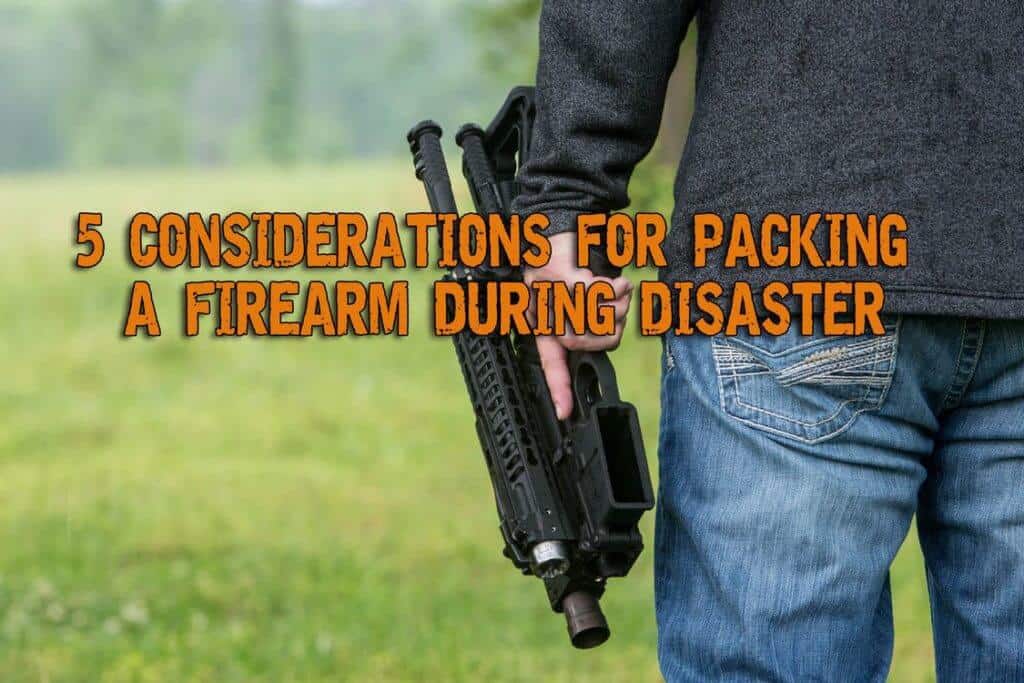 If a long-term and large-scale grid down disaster were ever to occur in your area, have you given any thought to how you would handle the issue of firearms?

Obviously, firearms are something that you will want to have close by when the grid goes down for security purposes.  But if you think that you’ll just strap your pistol to your hip and keep an AR-15 slung over your shoulder, you’re gravely mistaken if you think that’s the right course of action for you to take.

You see, you would be much wiser if you are more careful and cautious about how you pack firearms on your person in a grid down disaster while simultaneously keeping those firearms within easy access so you can defend yourself quickly if you need to.

Here are the top five considerations for packing a firearm during a disaster:

Keeping a handgun on your person at all times will be a very smart thing to do during a major grid down disaster scenario.  The reason for this is because you will want to be able to draw your firearm and defend yourself very quickly in the event that you are attacked.

It’s also important to be smart about the specific type of handgun that you keep on your person as well.  Generally speaking, a smaller sized gun such as a .38 snubnose revolver won’t be the best choice for you to keep strapped to your hip during a disaster.

Why?  Because guns like that are harder to shoot not to mention that they have a much smaller capacity and are therefore not the best choice for defending yourself against multiple attackers.

Instead, you’ll want to go with a larger sized gun with more bullets, such as a 9mm Glock 17 or 19 or anything of a similar size and caliber

You may have this idea in your mind that when the grid goes down, everybody is going to be walking around with a gun in their open carry holster.  While some people might do that, most people still won’t, and furthermore, you’re definitely going to be attracting a lot of unwanted attention if you do that as well.

In short, you will want to keep a handgun on your person during a grid down disaster, but you will also want to keep it concealed rather than open carried.  Keeping your gun in a shoulder holster under your jacket or in an IWB/OWB holster under a shirt are two examples of places where you can keep your handgun concealed.

A semi-automatic rifle such as an AR-15, AK-47, or the Ruger Mini-14 will always be a superior option for defense over a handgun.

There are a multitude of reasons for this: it carries more bullets, it’s more powerful with greater stopping power, it has a longer range and greater bullet velocity, and so on.

Let’s put it this way: if you ever have to defend your house and property against an armed and dangerous party of multiple marauders, a semi-automatic rifle is simply going to be a more effective defensive tool than a pistol and even more so than a shotgun as well, which is traditionally thought of as being the ultimate defensive weapon.

If you don’t yet have a semi-automatic rifle with a detachable magazine that you can use for defense, you’ll want to change that.

You get the idea.  Your rifle should always be kept within easy access and reach so you can defend yourself against multiple attackers if you need to.

As with your pistol, be sure to keep your rifle concealed and out of sight.  Just also make sure that it’s within easy access so you can reach it within a moment’s notice if you need to.

If you come under attack from multiple people at once during a major grid down disaster, you’ll be faced with the very strong possibility that you’ll need to reload your defensive firearm.

What does this mean for you?  It means that when you’re conceal carrying your pistol during a grid down disaster, you’ll also want to be sure that you have at least one or two spare magazines on you as well.

In the case of your rifle, keep a few magazines on standby as well.  Preferably, you can keep the rifle magazines in a bandolier pouch of some kind so you can quickly sling them across your shoulder if you need to so you’ll have quick access to them.

Last but not least, you need to remember to follow the law as well.  You see, the law is not going to go away during a grid down disaster, and neither are the authorities.  If anything, the authorities are only going to become a larger and more pronounced presence.

Before we talked about how you’ll want to keep any firearms you have on you concealed, so you don’t draw attention by the authorities.  You’ll also want to ensure that you abide by any and all laws that relate to guns and concealed carry in your area as well.

For example, do you live in a city or district where you aren’t allowed to conceal more than one firearm on you at a time?  If so, that’s a law you’ll still want to abide by, because if the police or National Guard to find out that you are conceal carrying, you can bet they’ll take issue with it.

Remember, just because a grid down disaster has occurred does not at all mean that these laws are going to go away.  You will still need to abide by them and that’s your responsibility.

The one exception to where the law would ‘go away’ during a disaster is if martial law is declared.  In this case, though, your constitutional rights are going to no longer be recognized (including your right to keep and bears arms), and it’s likely that mass gun confiscation would take place as happened during the virtual martial law in Hurricane Katrina in 2005.

In that scenario, you’ll want to find steps to hide as many of your firearms as best you can.  Conceal carrying your firearms, if you do choose to continue carrying, would become even more essential for you then as well.

Overall, these are the top five considerations you will want to keep in mind for packing a firearm during a major disaster.  As you can hopefully tell, simply strapping your pistol to your hip during a grid down disaster will not be the best course of action for you to take.  There are many other factors at play, and you will still need to strive to follow the law and avoid drawing attention to yourself.

1 thought on “5 Considerations For Packing Firearms During Disaster”