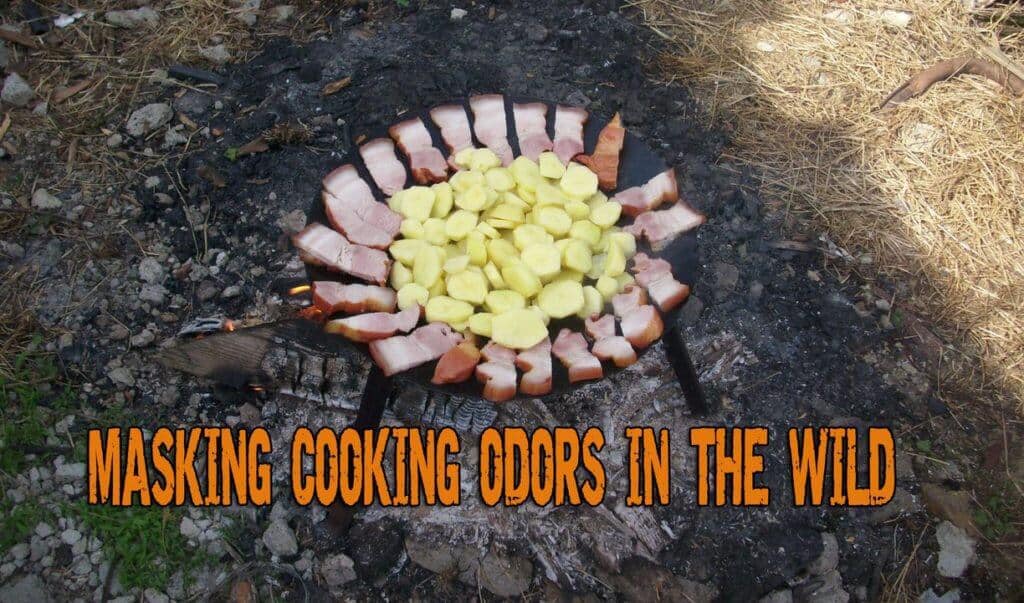 Ever heard an exhilarating tale of a family out on a simple weekend excursion cooking a delicious dinner over an open fire. Or maybe keeping their cooler just outside the tent for the night (the lid on, of course…), only to have a near-death experience. Not to mention a speedily depleted supply due to the unexpected company of a bear or some other famished animal?

Ever laugh and think, “Well, that won’t happen to me!”?

If so, you are dead wrong. It could happen anytime anywhere. However, the likelihood increases considerably if you are extremely sloppy with your outdoor cooking and eating habits. Bear in mind that your chances of ever even running across a predator in the wild is slim.

If you are a prepper who is interested in stealth and concealment (you know, just in case shit ever splatters the fan), you have probably studied up on how to make smokeless fires. How to leave no signs of your encampment, and maybe even how to employ a handful of evasion skills.

However, have you ever thought about how to get away with cooking – all the while concealing the revealing scents of the food in the pan? It is a topic that has been little discussed but holds a tremendous importance.

Now, to be entirely honest, it is not exactly possible to prepare a meal outside without some odor exuding, therefore alluring any human beings or animals. While you can most definitely mask some smells, you cannot completely cover them up.

That being said, let’s get to the nitty-gritty: There will always be a risk of someone, or worse, something, scenting out that delicious dinner you’ve whipped up.

Suggested article: Cooking With Mud Like In The Old Days

Contents hide
1 Suggested article: Cooking With Mud Like In The Old Days
2 Here are a few techniques to keep in mind when attempting to mask cooking smells in the wild:
2.1 Location
2.2 Assuming Can be Good (sometimes)
2.3 Store Food Appropriately
2.4 Maintaining a Separate Camp for Cooking
2.5 Refrain From Cooking Strong-smelling Foods
2.6 Properly Dispose of Scraps
2.7 Clean Up Without Delay
2.8 Shed Food-scented Clothes
3 Keeping Humans At Bay
3.1 Related article: Survival Improvised Cooking
3.2 All Things Considered
4 Useful resources to check out:

Sure, there are ways to cover up and minimize the influence your cooking has with regard to charming dreadfuls by way of those savory smells you are creating; but always keep in mind that these techniques only mask the smell. So we get into the importance of common sense.

Common sense should rule the world. We know it doesn’t, but it should. Don’t leave food out and about recklessly. It is not only to keep big, scary predators at bay, but it is also to preserve the food you need while on your excursion (or whatever the scenario may be).

A single raccoon can wreak absolute havoc on your food supply if it is left out in the open. Just as a coyote or similar predator-like animal, though not typically aggressive toward humans, may be lured into your encampment by the attractive scents of unattended foods, only to find a fresh piece of hot-blooded meat laying half naked in a tent…

Ponder all of the deforestation that has taken place in our world; trust the fact that some animals are just downright hungry, leaving more chance for an irregular attack to happen.

If your goal is stealth, and staying under the radar from human presence, these same common sense techniques will make the world of difference.

These should be practiced as much as any other evasive skill. Not only could it help keep you out of shit, it can make just about any experience at least half enjoyable. And remember, basic morality during any scenario is, at a minimum, half of the battle.

Here are a few techniques to keep in mind when attempting to mask cooking smells in the wild:

As is typically the case, the spot you decide to make your camp is important (just ask any real estate agent). Pay attention for any signs of wildlife presence; keep a sharp eye open. This can help reduce the risk of ever even being near a predator. In order to decrease the risk of any human intruders, try to make camp in a place that is out of the way or inconvenient to get to.

Assuming Can be Good (sometimes)

Always assume that predators are nearby. It would be ideal to always carry bear spray on you (and if possible, a firearm). Just because you have followed a tight protocol perfectly doesn’t mean that a hungry animal won’t bust in on your good time.

This technique is of the most importance and only requires but the most basic dose of common sense. There are such things as bear-resistant food canisters on the market for this. The idea is to hang your food in a protected bag or box from a tree limb. This does not mean that animals will not be able to sniff out your food. It simply means that they will not be able to get to it and most definitely not in your camp. Which leads to the next technique.

Maintaining a Separate Camp for Cooking

The only sure fire way (if there can actually be such a thing) to keep animals away from your sleeping bivouac is to establish a “cook camp” that is at least a good five to ten-minute walk away. This second camp will be used for all of your culinary needs. Storage, eating, cooking and cleaning.

Again, apply that birthright labeled “common sense”, and you will fair quite well. Some foods are simply infamous predator bait and will raise the risk of conflict. Precooked meals or dehydrated foods are a great route to take (but still not surefire).

This is just as important as storing your food correctly. It is one of the simplest tasks…carry them far away from both campsites, the one in which your most time will be spent as well as the “kitchen camp.”

Clean Up Without Delay

Prudence, judgement…common sense. You would be absolutely amazed by a quick Google search of demonstrations of people forgetting this common sense stuff. Wipe everything clean; remove any remnants of oil or grease off the stove, disinfect the countertop or table, scrub your tableware and kitchenware. You may guess that animals cannot smell food leavings on cutlery simply because you do not, but you are dead wrong.

Also, remember to leave everything to do with the cooking there in the separate camp. If there is any concern that items may be stolen, try your best to hide them well. Keep in mind: it is better to lose your stuff than wind up being intruded upon by unsought.

Keep the clothes you cooked in away from your main camp. Preferably in the same cook camp that all the other cooking-related things stayed. Obviously food scents linger (try working in the back of a restaurant for a shift or two), and wild animals have an immaculate sense of smell – far, far superior to us mere humans.

While the techniques above are mostly regarding animals, they can help to keep humans away as well. It is important to note, however, that animals and humans are two entirely different ball games.

It is true, we are the alpha, the top of the food chain, the big dog, so to speak. However, our sense of smell is absolutely second-rate in comparison to that of a wild animal’s. When humans are tracking another human, they typically use their sense of sight.

Your best bet is to learn as much as you can about camouflaging, evasion and stealth knacks. Always check the perimeter around your camp, looking for any signs of things being out of the ordinary.

As for cooking smells, the techniques appropriated above will help you remain hidden. We humans have a lackluster sense of smell (well, considering we are comparing it to animals).

Therefore, it is a mite easier to conceal the smells of your food from others. Avoiding loud-smelling foods and large, open fires will reduce your chances of being detected. For concealment from animal or human, having your campsite separate from your cook site is dire as well as masking your trace between the sites.

There are no true grand and difficult hoops to jump through to hide what you’re up to and cover your tracks when it involves cooking in the wild.  If you must avoid humans at all cost (as could very well and quickly become the case), sticking to dried/dehydrated goods will be most advisable. Otherwise, stick to the plans listed above and use that noodle to bring out some common sense.

1 thought on “Masking Cooking Odors in the Wild”