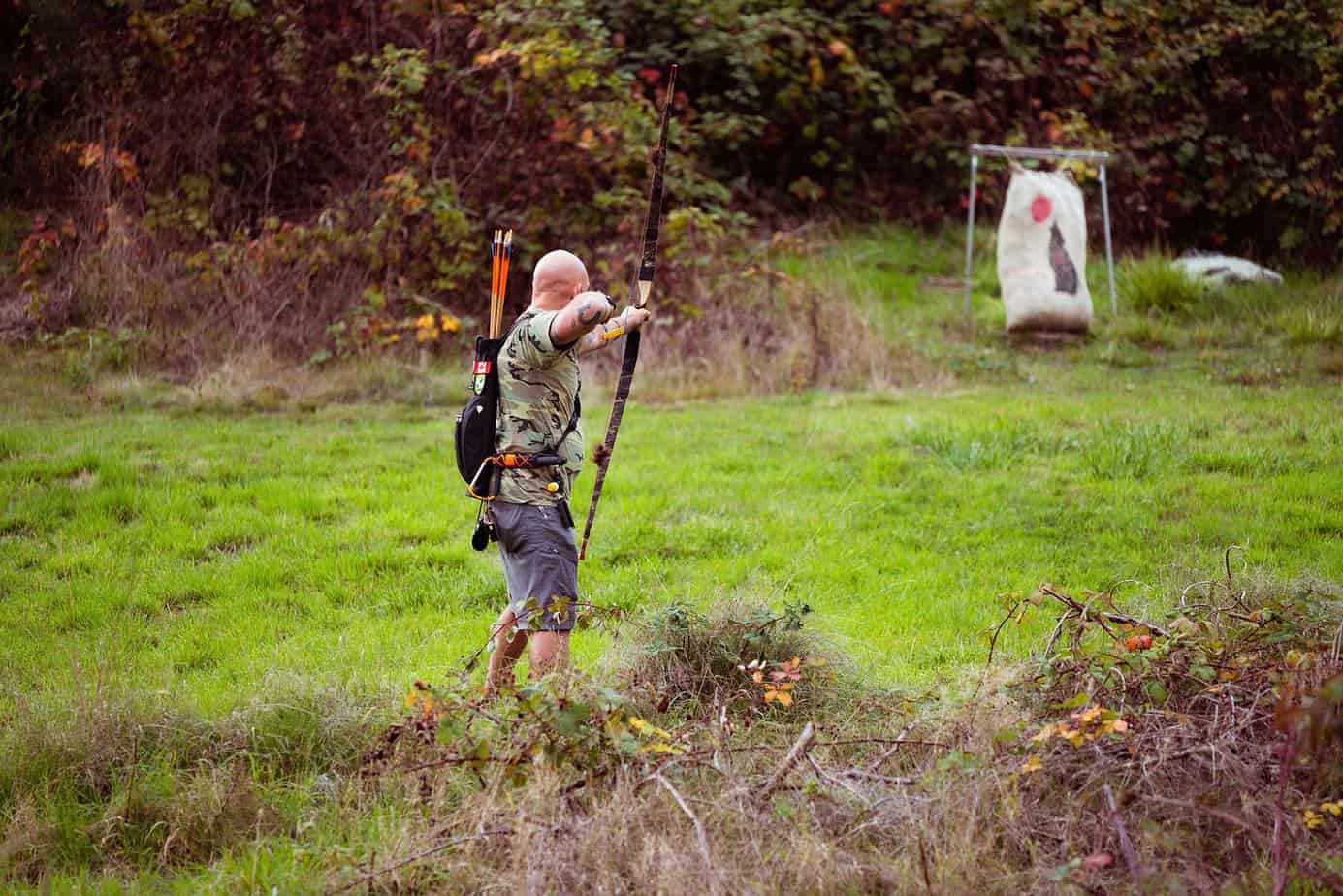 To me, traditional archery is one of our ancestral hunting heritage’s greatest treasures. Hunting with a traditional bow is a way to connect with an ultra-primitive human activity that, in many ways, has changed very little since the beginning.

No doubt the first stick bows were rough and unrefined, and I’m sure humans struggled to shoot them accurately. They probably discussed and shared their methods, strategies, and practice routines with one another, much like we do today. 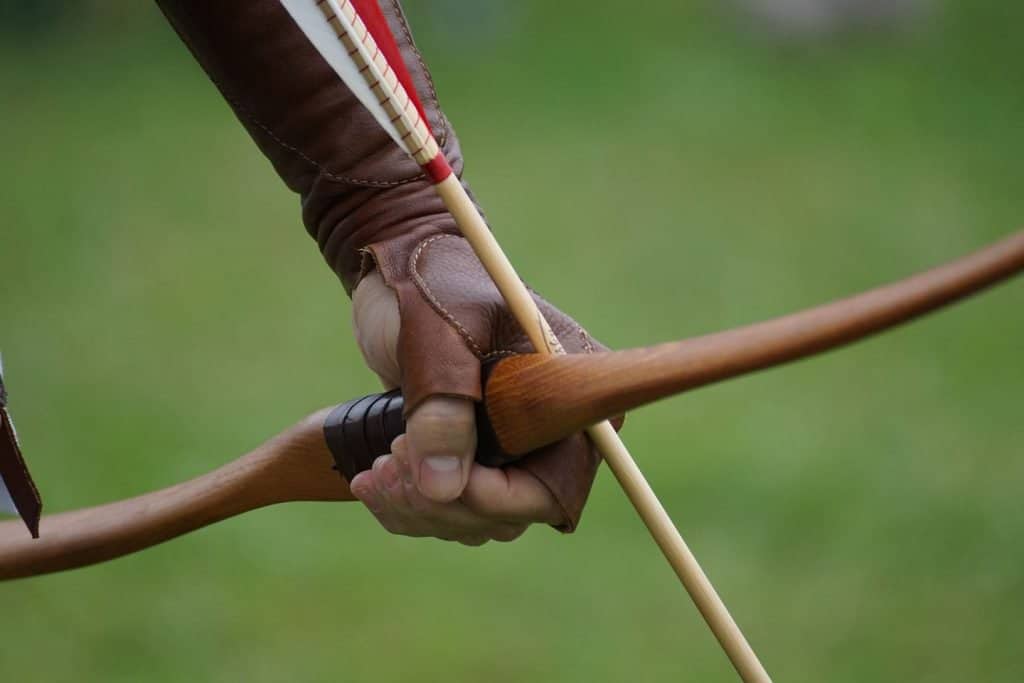 Traditional archery is a category of bow shooting in which a selfbow, recurve, or longbow is used without release aids or sights. Most traditional bows are made of wood, but some are built of manmade materials. A selfbow is the most primitive, hewn from a single piece of wood. Archery, in its simplest form, a selfbow is basically carved out of a single section of a select tree type.

The choice of wood varies all over the world, but many in North America are made from yew, maple, hickory, or Osage orange. Most modern recurves and longbows are made of multiple wood types, and fiberglass laminated together. Bowyers—people who build bows—laminate bows to increase performance and enhance beauty.

It’s important to understand the methods in which traditional bows are aimed and shot. The two most common are instinctive shooting and gap shooting. We’ll cover instinctive shooting in this article, and it could be compared to throwing a baseball. You don’t really aim; instead, you focus on a certain spot and throw the ball.

The more you throw it, the more your mind, body, and instincts collaborate to build accuracy. For gap shooting, you use reference points on the bow and arrow to aim. Basically, you estimate the distance to your target, then use predetermined points of reference in your sight window to aim. Gap shooting is like using a primitive sight.

Traditional bows are readily available and increasingly popular. Getting one in your hand isn’t the issue; however, shooting it accurately enough for hunting is. People with limited exposure could view hitting your target almost as luck because arrow flight can seem so random in an untrained hand. As you learn, though, you’ll see that shooting instinctively is a lot less magic and a lot more physics than it first appears.

The bow will perform flawlessly and identically every time if shot the exact same way. A compound uses technology to help the archer consistently draw, aim and anchor in the same place. In traditional archery, these systems don’t come naturally. The following five points are the fundamentals I use in my draw cycle. Master them, and you’ll improve your proficiency. 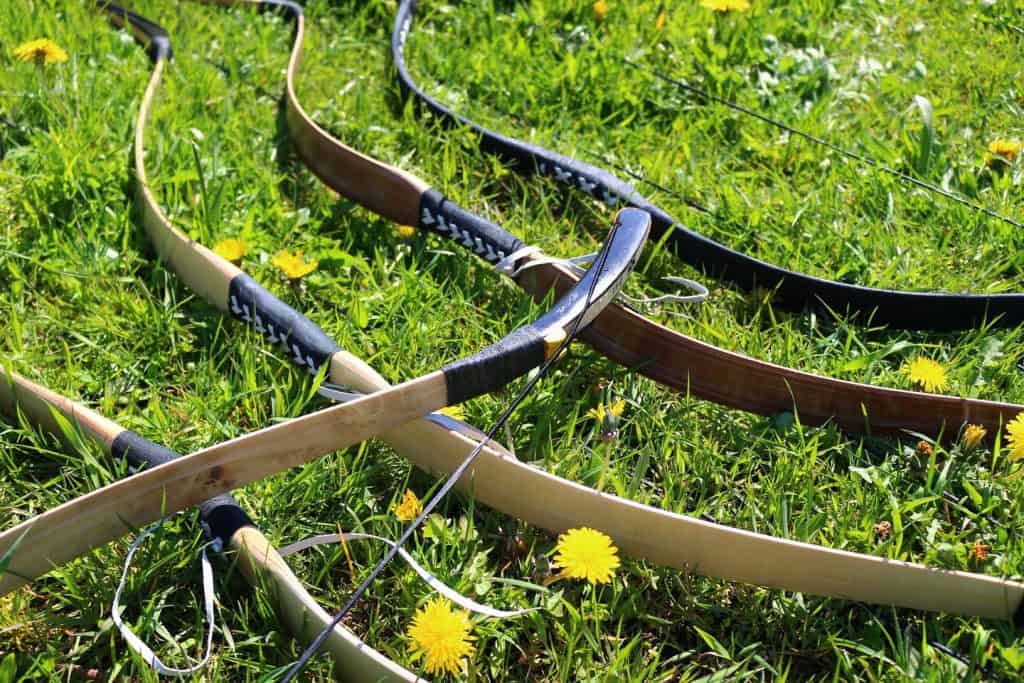 One of the biggest challenges I had to overcome in traditional archery was mental. After years of shooting compound bows that hit velocities higher than 300 feet per second, it was difficult for me to understand how a traditional bow could be an effective hunting tool.

However, traditional bows will ethically kill any animal on the planet. The focus on arrow speed in the bow market is primarily a marketing tool, not a hunting necessity. Shot placement and accuracy are far more important than velocity.

Momentum is the correct equation to use for calculating the energy an arrow has for penetration (not kinetic energy, which doesn’t calculate directional vectors).

Why does this matter?

In this equation, arrow weight (mass) is as important as the velocity. A heavy arrow is the key to good penetration.

I love shooting a compound bow and will continue to hunt with one. However, when I’m holding my traditional bow, I switch gears and become a lot more selective with my shot angle and shot distance, and I pay closer attention to the animal’s attentiveness.

In October 2016, I harvested six animals with traditional equipment. Four of six arrows completely passed through the animals, two of which were bears. None of these animals traveled farther than 75 yards after the shot. Honestly, I can’t remember the last time I had those stats shooting my compound bow.

What Type of Traditional Bow and Arrows do you Need? 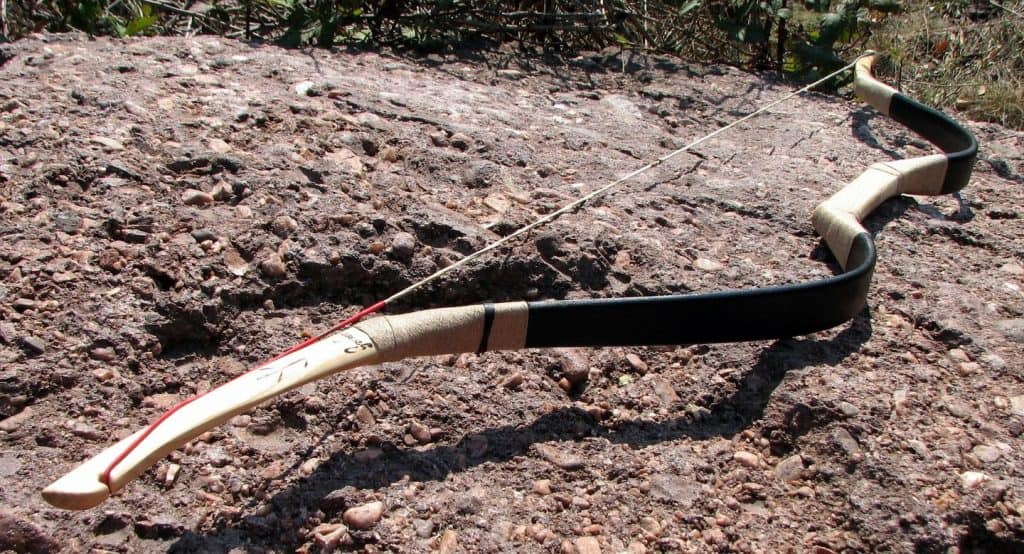 Speed aids in penetration when it comes to hunting, but accuracy is far more important. If your goal is to simply hunt with traditional equipment, you might start with a recurve. However, if you’re looking for the ultimate archery challenge, start at the bottom with a selfbow.

Often, a new shooter’s second question is where to get a traditional bow. Several mainstream archery companies offer traditional lines. Bear Archery and Martin Archery have good selections, but many new companies make them, too. For instance, a company called Samick makes traditional bows that are getting good reviews.

However, custom-made bows are very popular, and bowyers are everywhere. I’m amazed by the number of people who make traditional bows in their shops and garages. No doubt, you’ve likely got a bowyer near you.

You can also fletch your own arrows if you prefer to customize them and fully control the quality of them.

They’re wrapped in a natural wood casing for a traditional feel. However, when I miss, the arrow usually survives. I add weighted inserts made by Gold Tip to beef up my arrows to between 550 and 650 grains for my 64-pound bow.

Note: As far as draw weight goes, less is usually more. Many of the best hunting archers I know shoot less than 50 pounds.

Fundamentals of shooting a traditional bow 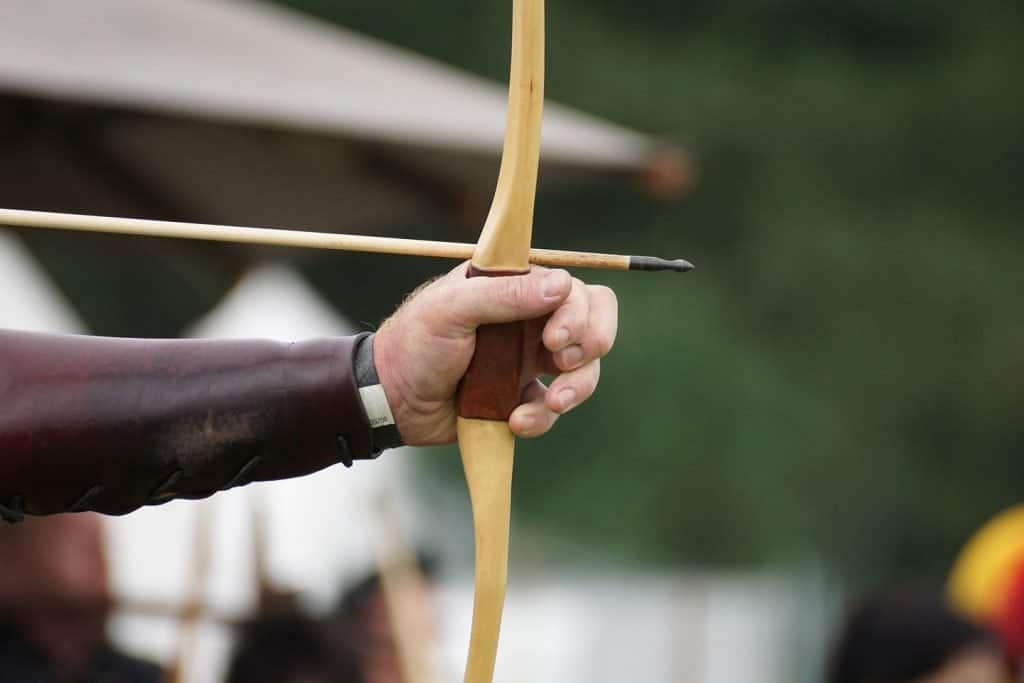 The following five points are the fundamentals I use in my draw cycle. Master them, and you’ll improve your proficiency.

Your bow arm is the one that holds the bow. Typically, it’s your non-dominant arm. The bow arm is a critical component for aiming. Envision holding the bow out and extending your pointer finger directly at the target. The bow arm directs the arrow’s flight.

Additionally, the arrow is flying slowly enough that you’ll shoot low if you drop your arm during or after the shot. The arrow simply doesn’t get off the riser that quickly. It helps me to mentally recite, “Keep the bow arm in place until the arrow hits.” Envision your bow arm pointing at the exact spot you want to hit.

Much like shooting a compound bow, your bow arm should be slightly bent and your grip light and open.

The anchor is the furthest point to which you draw the string. It’s one of the most critical components in shooting consistently. Essentially, you must pull the string back to the same spot every time. How far you pull it determines the amount of energy that will transfer to the arrow, which affects the trajectory. Find a comfortable place on your face to which you can consistently pull.

Your anchor point and bow arm are connected and create the draw cycle. You can be anchored in the correct place, but if your bow arm is bent too much, you aren’t pulling the bow back far enough. Finding a consistent anchor is critical. I anchor with my middle finger dug into the corner of my mouth. This puts the arrow directly underneath my eye, allowing me to look down the arrow to aim.

Some people anchor for a few seconds before they release, while others prefer to release as soon as the string touches their anchor.

I use this phrase to help me visualize how to release the string. A correct and smooth release is more about your back and shoulders than your fingers. To me, it feels like I’m trying to pinch my shoulder blades together as I slowly release tension from my fingers, allowing the string to release cleanly.

A poor release is the most common reason for hitting left or right of your intended target. This is critical: When releasing the string, don’t spring your fingers open; rather, relax them and allow the string to pull away from your hand as it naturally springs free once tension is released. Your release-arm elbow should move straight backwards after the release.

My accuracy increased noticeably when I started shooting three fingers under the arrow nock. Many prefer to shoot with one finger over and two under the nock. Originally, I shot this way, but I struggled with accuracy. Try both ways to see which one works best for you.

I once saw Gene Wensel (a legendary traditional archer) shoot with three fingers under, anchoring with the nock right under his eye. This revolutionized the way I shot, increasing my accuracy substantially. By drawing the aiming point directly in the line of sight, aiming comes more naturally.

We’ve all heard this adage, and we all think we do it, but we all have room to improve. With instinctive shooting, this is a powerful piece of the equation and, perhaps, one of the most difficult. You’ll hit where you look.

You can be fairly accurate at close range by subconsciously memorizing the sight window and gap shooting (using the arrow as a reference point for aiming). However, this is the human side of the equation where focus and concentration can play a big part in accuracy.

I try to train myself to pick a spot, even outside of archery practice. For practice, don’t just look at a leaf, but look at a certain spot on the leaf. Don’t merely look at the white wall, but pick a specific spot on the wall to concentrate on.

This can be good practice to tighten up your mental accuracy. You’ll find that when the other shooting components are aligned and consistent, the arrow will hit where you’re looking. It does almost seem like magic sometimes.