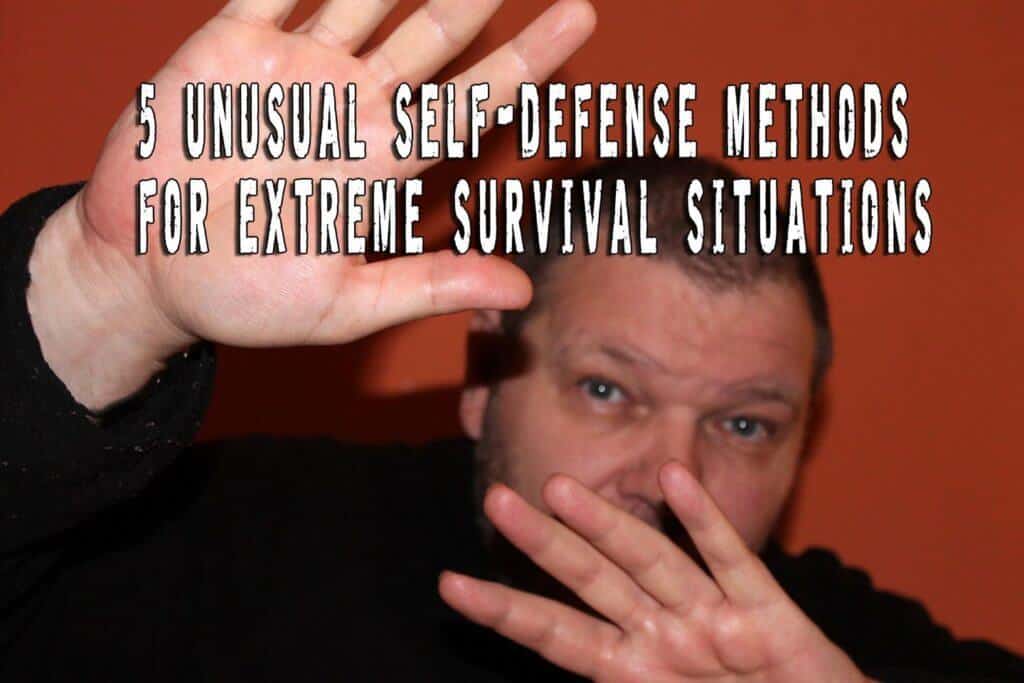 While many people hope that they will never have to use them, having survival skills can help ensure that you make it through a life-threatening situation. You’ve likely seen advice on preparing survival kits and adopting self-sufficient habits. These things are quite important, but it also is vital to learn self-defense skills in case you find yourself in a life-threatening emergency.

Below are five uncommon strategies for defending yourself that may become useful in the future.

Any survivalist knows that being a competent shooter is an incredibly important part of self-sufficiency. Once you’ve mastered the art of shooting, getting a concealed carry permit is the next step in planning for self defense. Having a pistol on your person is useful for defending yourself against potential attackers. In some cases, concealed carry permit holders have stopped mass shootings in progress.

Many celebrities also report having concealed carry permits. Brad Pitt has noted that he feels safer when owning a gun, and several other Hollywood stars, including Clint Eastwood and Marc Anthony, are also licensed to carry.

It may sound odd to use a paintball gun for defense against a home invasion. However, while this subject is somewhat controversial, a high-caliber paintball gun has enough stopping power to at least slow down a person who is breaking into your home. One couple in Canada – Rob and Nichole Iezzi – report using paintball guns as a deterrent for thieves.

If you are looking for a reliable paintball gun for defense purposes, the Tippmann A5 is a sturdy, reliable gun that also has an intimidating profile, making it useful for scaring away thieves and others who may want to break into your home. As with firearms, in order to most effectively use a paintball gun for self-defense, it is wise to make sure that you are a skilled shooter and that you practice regularly.

Another alternative would be to use your airsoft guns since these toys for grownups are almost identical to the real thing. Few people would be able to tell the difference between an airsoft replica and a real gun. Not to mention that you could make some changes to your airsoft guns and make them ideal tools to keep thieves at bay. Some of the best airsoft guns on the market are quite cheap and you can use them for various purposes (teach your kids about guns, tactical drills, etc.).

3. Ultra-Powered Flashlights Give You an Advantage

As with the smokescreen effect created with the spray weapons listed above, the temporary blindness caused by these flashlights may be enough to allow you to get away from an attacker. It also can allow you to punch, knock down, or otherwise subdue the person. Even if the attacker is larger or stronger than you are, the temporary blindness may be disabling enough that you can still restrain or escape them.

Sometimes, when faced with a home invasion, you may find yourself unprepared. Maybe you can’t get to your shotgun fast enough, or you don’t have any weapons in your home at all. If you find yourself in this situation, all hope isn’t lost. Much of successful self-defense depends on quick thinking and resourcefulness. You can use common household items in ingenious ways to slow down an intruder, or to distract them long enough to allow you to escape.

Two common household items are wasp spray and fire extinguishers. Spraying a wasp spray at an intruder’s face can distract them and give you enough time to react. Because wasp sprays contain poisons, it can also cause pain and damage. This can slow down or stop an intruder and allow you to get away.

Related reading: Self defense in a gun-free zone

Similarly, spraying a fire extinguisher at an intruder can make it difficult for them to see or breathe. If you have a more powerful extinguisher, you can create what is effectively a smoke screen. This can help obscure you from view long enough to make an escape.

But don’t forget, a loyal man’s best friend can prove to be not only a loving, adorable company, but even save your life!  Catalina Humphrey, a Texas woman attacked by an unknown man in broad daylight was saved when her Rottweiler immediately started bighting the assailant. Once faces with the surprise counterattack of the devoted pet, the assaulter fled the scene running for his own life.

Sometimes, having the element of surprise is enough when you find yourself under attack or otherwise threatened. And while concealed firearm carry is an excellent way to ensure you have the element of surprise, there are some alternatives for those who are in areas where firearms are banned. Stealth weapons are dangerous or lethal weapons that are disguised as common, everyday objects.

For instance, stun guns can be disguised as cell phones or as lipstick, and you can even buy an umbrella that conceals a sword. These disguised weapons are inconspicuous and can help you take down or escape an attacker. This of course, if you carry them in a way that makes them easily accessible to you, and that you understand how to use them effectively.

In short, while you probably hope you don’t ever find yourself in an extreme survival situation, making sure you are well-prepared to deal with such a situation is vitally important. By utilizing the above self-defense strategies, you can ensure that, should you ever find yourself in danger, you will know what to do, and your odds of survival will be greatly increased.

Article written by Amanda Wilks for Prepper’s Will.