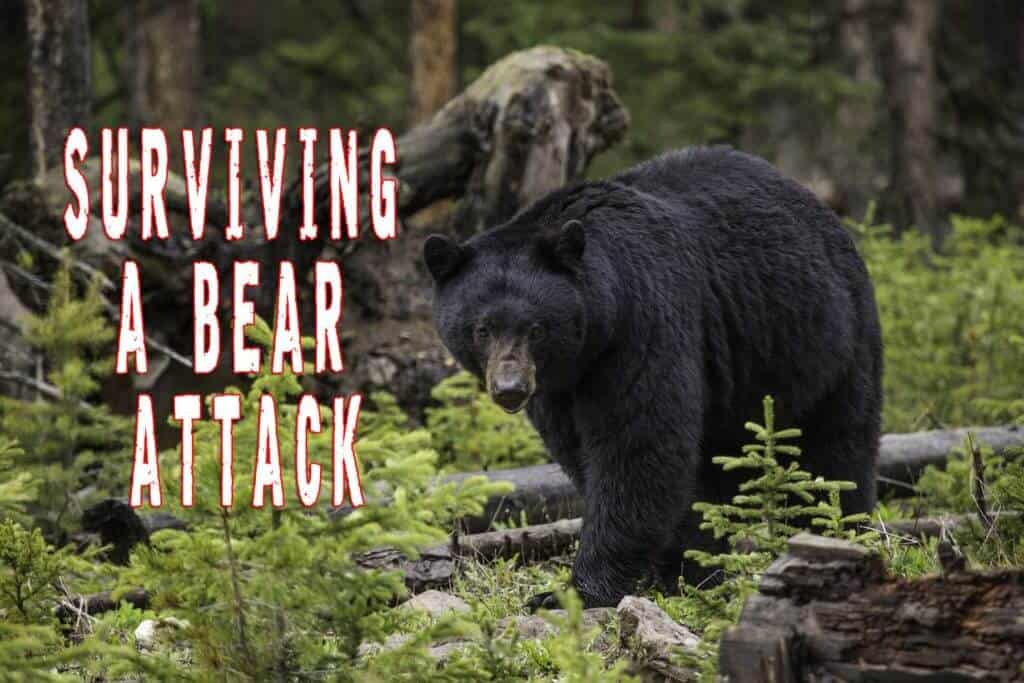 These days, humans don’t have nearly the amount of problems with bears as we once did. This is largely because our increasing population, technological advances and attitudes towards bears, in general, have largely decreased their population in recent centuries. However, a bear could become a serious problem when exploring the great outdoors.

Just because the population has decreased, though, doesn’t mean you will never come face to face will a bear in the woods. There are still bears of many types roaming the U.S, and when people venture to areas where bears still live, it’s not outside the realm of possibility that meetings might occur. What do you think will happen if you find yourself up against a 600-pound grizzly, or even a smaller cousin like the black bear?

That said, a bear can take you by surprise when you’re hunting, fishing, hiking, climbing, camping, or generally enjoying the great outdoors (i.e., the bear’s backyard). What should you do when faced with a bear? How can you survive a close encounter… or even an attack?

Contents hide
1 A Policy of Avoidance
2 When Faced with a Bear…
3 Attack Aftermath
3.1 Other Useful Resources:

When it comes to surviving a bear attack, your best chance lies in never encountering a bear in the first place. If you’re unwilling to avoid their natural habitat, you need to at least know the signs that bears are in the area so you can steer clear.

First, ask authorities like park rangers, if available, about bears in the area. Avoid areas bears prefer, such as along ridges or riverbanks. You should also learn to recognize bear scat and determine relative freshness. This will tell you if bears are in the nearby vicinity.

Next, you need to observe a few safety rules. Make some noise so bears know you’re near. Likely they will try to avoid you. Leave your dog at home. While you want to avoid a bear, your pet might not be as wise. Finally, make sure your food is properly stored (ideally in a bear box) and keep your site clean. Chance encounters occur, but if you have food, you’re much more likely to meet a bear who wants a nibble.

Many campsites and National Parks have very strict rules pertaining to wildlife, especially bears, for a reason. Make time to read up on guidelines and be sure to talk to your kids, as well!

When Faced with a Bear…

Remember all bears are wild, even cubs. Do not take selfies or approach cubs, the mother is nearby and will defend what she views as any perceived threats to her cubs.

If you encounter a bear, you need to know two things: what the bear’s body language means, and how to react. First things first. DO NOT RUN. Your first instinct may be to flee; this is a mistake. You can’t outrun a bear, and contrary to popular belief, even grizzlies can climb trees.

Stand your ground and then begin to slowly move away from the bear sideways. This is non-threatening and you can keep an eye on the bear. When a bear huffs, snorts, growls, snaps his jaws, and lays his ears back, don’t panic. Just stay still. He doesn’t know if you’re a threat and he’s acting aggressively. He may also charge and then turn away at the last minute as a bluff. It’s going to be hard, but don’t move. If you run, a bear is much more likely to chase you.

If a bear attacks, your best bet is to use bear spray or pepper spray, which confuses and occupies the bear so you can escape. You need to practice using it BEFORE you meet a bear. Without practice you may panic and make a costly mistake.

Here is an useful infographic provided by blackforestdecor,  showing you all you need to know about bears:

Like all wild animals, bears can be somewhat unpredictable. Even if you do everything right, you could fall prey to an attack, or you might just find yourself in a situation (as with a mother bear with cubs) where there is no clear “right” move. In such cases, you need to be prepared to deal with an emergency situation. What do you do AFTER a bear attacks?

Preparation is key. Hike with a group or at least let someone know where you’ll be and when you plan to return. Wear bright colors (like hunter’s orange and reflective tape) so rescuers can spot you. Bring along medical supplies in case you need to administer care. A sat phone couldn’t hurt, either.

The important thing is not to panic; this could cost you your life. Stay calm, address wounds, and try to get yourself to safety or call for help if possible. Bear attacks are rare, but they can happen, and a level head will help you to avoid them or at least react appropriately when encounters or attacks occur.