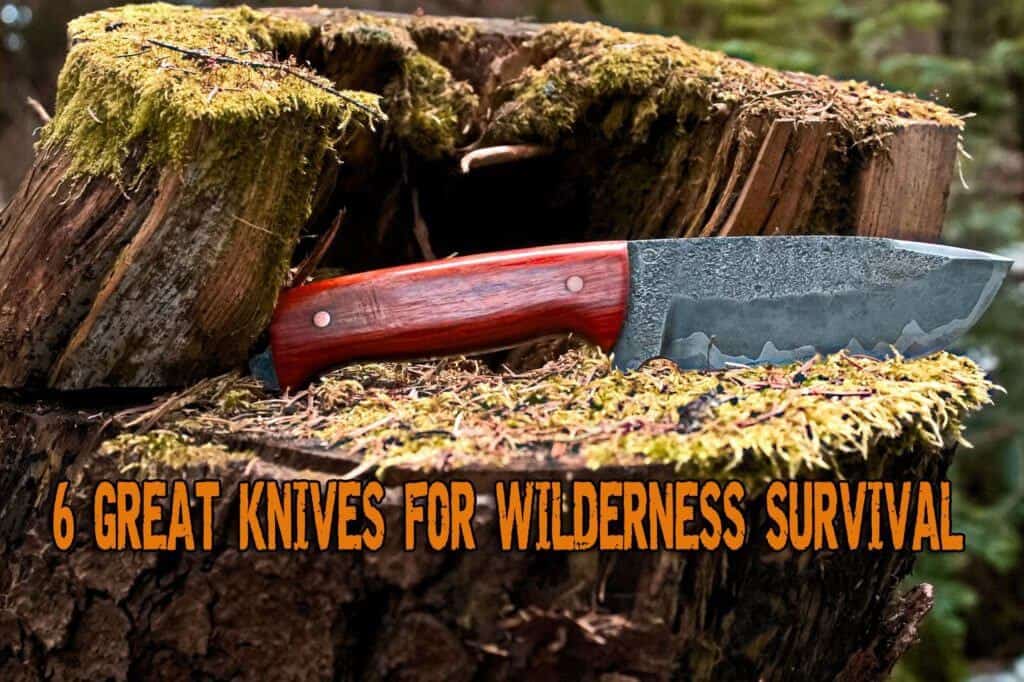 Remember the rifle mantra from Full Metal Jacket, Kubrick’s take on the army life? Just as a rifle’s the soldier’s best friend, so’s a utility knife for the survivalist. In this article, we’re going to show you some of the best wilderness survival knives available on the market. Some of them are variations on iconic melee weapons (knives used by soldiers in hand-to-hand combat) while others were designed for wilderness survival only.

You’ve probably heard the name of MacGyver more than once. Still, for those of you who don’t watch TV series, MacGyver was this cool, army-type dude, who used all sorts of tricks to escape life-threatening situations.

MacGyver’s most treasured possession was, of course, his survival knife. While you’re out, alone, afraid, that blade you have in your pocket is more valuable than all the money in the world. A survival blade can help carve a path through thick foliage, hunt, make a fire, and even erect a shelter. This tool’s only limitation is your imagination.

Of course, for a knife to be able to perform under such conditions, it should incorporate only the toughest materials. For example, non-stainless knives made from high carbon steel are harder to break but are prone to corrosion. On the other hand, those made from stainless steel are less prone to corrosion but tend to break more easily compared to those with a high carbon composition.

There’s also the matter of sharpening. Some knives are easy to sharpen, like those made from high carbon non-stainless still, whereas others take some considerable effort. It’s good to keep these things in mind when choosing a knife.

Of course, there are more factors to be taken into account when shopping for a survival knife. For more detailed information on what traits you should look for in the best wilderness survival knives, check out these survival knives reviews. You will learn more about Rockwell Hardness, sharpening techniques, and blade forging processes.

Our Choices in Wilderness Survival Knives

Having a good knife when exploring the great outdoors or when things go sideways in the world is as critical as having food and water. We should think about which survival knife style is good for us by looking at our daily lives. After all, you don’t need a good knife just because you’re waiting for the world to end.

The Gurkha-Kukri survival blade is not what you might call a compact knife. However, it does have a fascinating history, dating back to prehistorical times. Research suggests that the kukri has been derived from the sickle.

A Kukri has an inward curvature, making it one of the deadliest weapons in hand-to-hand combat and hunting. Although the kukri’s been employed for combat, it’s also an excellent survival knife. Such a stab weapon weighs between 450 and 900 grams, depending on the handle and the steel’s quality, with a blade length between 40 to 45 centimeters.

Commercial kukris have their handles made from brass or aluminum. However, the traditional knife’s handle is made from either hardwood of buffalo horn.

As a survival knife, the kukri is great for hacking away vegetation, cutting tough open shells like coconuts, making wooden stakes, and even hunting. The weapon’s curvature and its length provide more than enough momentum for slashing through bones and any kind of tissue. To find out more about these types of knives I recommend reading some Kukri knives reviews.

Still, the kukri’s rather cumbersome, and not very suitable for climbing or running.

Tool Logic’s foldable knife is the best companion a survivalist could hope for. It has a foldable 7.62-centimeter serrated blade made from non-reflective stainless steel and coated with titanium. In other words, it fits right into your back pocket. However, there’s more to this utility knife then meets the eye.

On the upper part of the handle, there’s a bright LED light that can be taken out and attached to any metallic surface. It also comes equipped with a loud, battery-powered alarm so you can make everybody aware of your position.

The Tool Logic S Pro survival knife can be attached to the belt thanks to its metallic clip. It’s ideal for low-light situations and precise incisions. The Gerber LMF II is a military-grade utility knife designed for cutting airplane fuselage. Gerber’s the brain-child of Jeff Freeman; a former Marine turned engineer and armament designer. Even though the LMF II infantry isn’t sturdy enough to sharpen stakes or to hack away vegetation, it does come in handy when you have to cut away through fabric (e.g., seatbelt). Furthermore, the serrated cutting edge allows the user to cut away through almost any kind of metal.

The handle’s made from glass-filled nylon and coated with rubber for extra comfort. LMF II features a lanyard hole on its pommel, as to allow the user to tie on a wooden stick and make it into a spear.

The U.S.M.C.’s iconic drop point-style utility knife is any survivalist’s dream.  Issued as standard infantry gear since the First World War, the KA-BAR Becker is the kind of utility knife that should never leave your side. The 17.78-cm blade is made from 1095 Chromium-Vanadium Carbon Steel, making it suitable to cut, slice, dice, and hack.

The knife’s handle is bound in high-quality leather which provides an excellent grip. This is a multi-use knife and you can find it in various knives classifications and ratings such as knives for hunting or knives for self-defense.

When it comes to utility, nothing beats the Swiss Army knife – it’s small, sturdy, and has enough stuff on it to get you out of any situations. Victorinox’s Centurion weighs only 83 grams, with all instruments made from premium, stainless steel. This particular model has a knife blade, an awl, a pair of tweezers, a toothpick, an 11.5-cm blade, a can opener, a bottle opener, and three types of screwdrivers. It even has a small, metallic loop which you can use to tie this utility knife to your backpack or belt.

The last item on our list of survival knives is the SOG Force, another military-grade knife capable of taking large amounts of punishment. Its 15.24-cm blade is made from AUS 8 steel, proving this knife with the resilience it needs to cut through literally anything. The SOG Force’s handle is made from glass-reinforced nylon and coated with checkered rubber for that extra grip. Talking about an overkill, this knife even has a serrated edge, capable of cutting barbed wire or sawing.

When it comes to choosing a survival knife and to survivalism in general, the two is one and one is none rule should be considered. A survival knife is the ultimate survival tool and tools will eventually break. I recommend having multiple backups for your tools and the same goes for your survival knife.

If budget is an issue, one should purchase knives that serve multiple tasks. The survival knife styles discussed above should provide readers with a basic understanding of what styles are available.

Buying a knife is always an exciting experience for me. Over the years I’ve learned that you need to pay attention to how you spend your money. Mainly if your survival depends on a particular tool. You should never rush into buying a knife without making sure all the above is covered.

As you can see, there are quite a lot of things to consider when choosing a wilderness survival knife. Be sure only to purchase from legitimate vendors, because the last thing you need is for the blade to shatter. Don’t forget to buy a sheath for your knife.