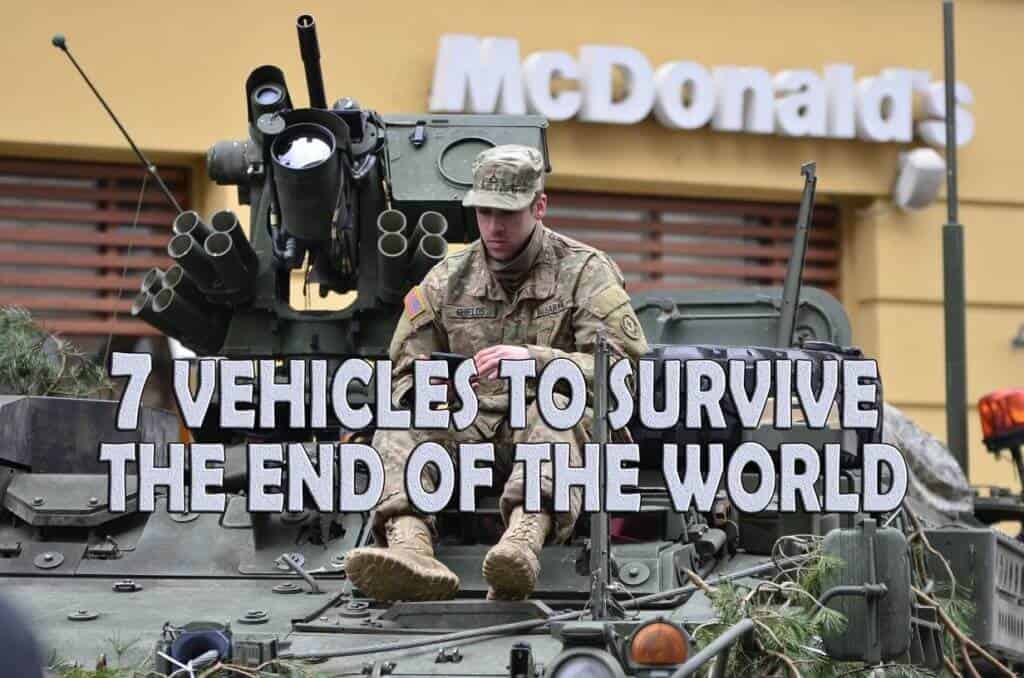 Whatever type of situation occurs to bring about a major disruption to our way of life, chances are it won’t be quite what we expected. The end of the world might not be as grim as described in modern fiction, but it will surely become a race for survival.

Of course, each of us has a list of potential scenarios for which we make it a daily process to prepare, but natural entropy and the whims of human nature on a political scale make it likely that conditions will vary from what we predict.

For this reason, it is a healthy exercise to posit ‘What if?’ scenarios and let our imaginations run wild, picturing possible outcomes to apocalyptic situations. And, as a great new infographic illustrates, one of the most pressing questions we face is: what vehicle should we drive for the end of the world? Here is a run down on the options we are offered: In case of a military situation, the likes of which we’re witnessing in Syria and parts of Africa, the Paramount Marauder is a serious proposition for mounting a safe escape. Armored against landmines and a range of projectiles, this personnel carrier will comfortably fit your extended family and keep them secure as you make for safer territory. Okay, so the chances of getting behind the wheel of the road equivalent of Airforce One is pretty remote, but it’s worth considering some of the presidential limo’s key features when modifying your own car: eight-inch thick steel plates and five-inch thick bulletproof glass were considered defenses fit for a leader – and, while on tour in Nairobi, Obama’s security team even though to include a supply of his blood in the trunk. If the first two suggestions feel somewhat unrealistic, here’s a proposition to bring you back to solid ground: the Hilux is a readily available pickup, sturdy, durable – and affordable. What’s more, it’s been the mainstay of paramilitary groups for over three decades, meaning that those in the field stand by it as their vehicle of choice. When there’s tough terrain to be covered, Land Rover keeps going and going. In fact, despite the Land Rovers’ devotees putting the iconic utility vehicle to the test for nearly 70 years, three-quarters of all Land Rovers produced are still on the road. It’s another wise and attainable choice if you’re planning for comparable longevity. While the British Army’s wheeled tanker of choice may be a little tougher to lay your hands on, the value the Brits place on this mammoth truck is worth listening to. Water and fuel are likely to be in desperate demand in the future, so factoring transport and storage of these precious fluids into your prep is a no-brainer. This would probably be the most efficient supply truck for the end of the world and as you can notice, it’s quite similar to the war rig from Mad Max: Fury Road movie. If you want to start living for tomorrow today, it could be the moment to trade your bricks-and-mortar for an RV with a difference. Nudging $2m (depending on the bells and whistles), the Action Mobil Desert Challenger is not so much a holiday home as an alternative way of living: an 8-wheeled, 30 ton motor home with space for 630 gallons of water and 660 gallons of gas, for when stopping is not an option. This one’s for the bachelors and bachelorettes. When you want to get away in a hurry and you’ve no kids, goldfish or walk-in wardrobe to weigh you down. The 261 mph, 1,479bhp will respond to your every whim – and despite its sporty appearance, four-wheel drive means no sudden stops when you leave the road to make tracks towards a brighter future.

If you need a gateway car for the end of the world, the suggestions above will satisfy even the most demanding driver. It is true that these commercial models may not come with installed machine guns and other deterrent factors, but the pictures listed in this article could provide you with ideas for a “special DIY project”.