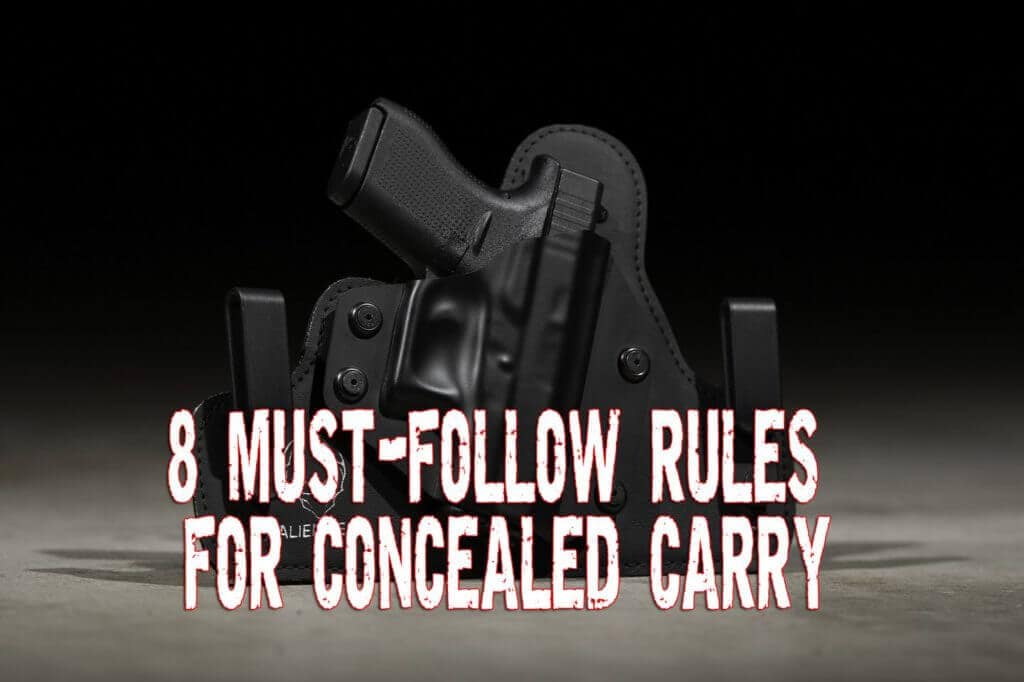 Carrying a concealed weapon comes with responsibilities and consequences. Concealed carry is a complex subject and you need to inform yourself to stay current and stay alive. Learning about concealed carry weapon is an ongoing process and it continues even after you receive your certificate.

The information in this article may be new to you or you could know all these concealed carry tips. Either way, take the time to refresh your mind and make sure you master these easy-to follow suggestions. When it comes to concealed carry there are some rules you need to follow. At the same time, there are some things you should avoid at any cost. Following these rules will help you stay prepared.

Contents hide
1 Concealed carry rules to follow:
1.1 1. Select the handgun that’s right for you
1.2 2. Pick the right gear for your handgun
1.2.1 Related reading: 5 Guns Every Prepper Should Own
1.3 3. Pay attention to the clothes you wear
1.4 4. Be realistic about caliber and capacity
1.5 5. Remember that you’re not Superman
1.5.1 A must read: 7 Tips for Successful Defensive Shooting
1.6 6. Defuse the situation if you can
1.7 7. If possible avoid gun free zones
1.8 8. Always have realistic expectations
1.8.1 Final toughs on concealed carry
1.8.2 Other Useful Resources:

1. Select the handgun that’s right for you

This is still one of the most discussed topics and it can be quite complicated for beginners. As you should know by now, weapons are made in numerous cartridge calibers. There are dozens of models for each cartridge and you need to settle on the appropriate handgun for you. Concealed carry means you will have to make some compromises. You will sometimes need to sacrifice capacity, accuracy or stopping power.

You can’t carry a full-size weapon because you’ll never be able to fully conceal it. Get a weapon, which you’re comfortable with. The one you can operate under high stress and constant pressure. While reviews may help you make the right choice, you better try it firsthand. Practice marksmanship and manipulation with your concealed carry, until you are certain it’s the right handgun for you.

2. Pick the right gear for your handgun

For concealed carry to work, there are three things that need to be a perfect fit: the operator, the handgun and the holster. The holster you chose should completely conceal your handgun. Even more, you should be able to smoothly and effectively draw your gun from that holster. You will need to do a little research because some holsters may not be ideal for every body type. The holster may also be too worn to be safe and effective.

When you get the right holster for your concealed carry, the next thing you want to do is practice. You should do various drawing and holstering drills from difference stances. There is nothing worse than having a holster that limits your reaction time or puts you in difficulty when drawing your weapon.

3. Pay attention to the clothes you wear

The whole point of concealed carry is to carry a gun undetected and have the element of surprise. With this in mind, you should dress accordingly to maximize your advantage. Pick out clothing that doesn’t draw unnecessary attention and avoid wearing tactical clothing outside the range. You should avoid making yourself look like a gunslinger.

The clothing you choose should help you blend in and nobody should suspect that you are carrying. If you wear fit clothes, the contour of your holster can be outlined and people will figure it out. Ensure your clothing is loose enough to completely conceal your weapon. There are various types of holsters that will help you with this issue.

4. Be realistic about caliber and capacity This is another huge debate when it comes to concealed carry. Most people agree that you should have an extra magazine end enough ammo to last you through a real life shooting scenario. The problem here is that your level of accuracy counts more than you think. Under high-stress, if you have to use your weapon, you won’t be able to hit with every shot. Statistics show that without proper training, you are likely to get one or two rounds on target at most. The rest will be misses and this can pose a problem in a real shooting scenario.

People may argue that one good hit is enough to disable one attacker. How about when you have to deal with multiple attackers? Let’s say you carry a Ruger LCP with six+1 rounds and you get 5 misses. After that, you will need a kill shot, otherwise you might as well throw it at the attacker. Think about carrying a pistol that allows you to sustain fire in an extended gun battle. Even more, always have an extra magazine with 10 or more rounds.

5. Remember that you’re not Superman

Owning and carrying a gun can develop a psychological impact. People often have a Superman complex, an unhealthy sense of responsibility. That being said, most of them forget they are not the law enforcement and they are everything but invincible.  When exposed to a high stakes situation, they will feel they need to do the right thing.

For example, if you’re at a gas station and you notice an armed robbery attempt, you might feel the need to do something about it. I advise you to double check that instinct before you take matters into your own hands. First of all, you can’t solve other people’s problems and second, your concealed carry is to protect you and not to enforce the law. Always look for a way out if there’s one. In case a conflict can’t be avoided and you have no other choice but to be involved, be prepared to act.

A must read: 7 Tips for Successful Defensive Shooting

6. Defuse the situation if you can

People tend to use the tools they have to get out of a tense conflict. This may become a problem when concealed carry is involved and people forget that their weapon is not always a problem-solver. According to the law, it’s your obligation not to aggravate the conflict and you must try to defuse the situation. You don’t have to use your gun to calm down a person and you need a certain ability to control the urge to do so.

Concealed carry requires a certain mindset and you shouldn’t forget that you’re responsible for your own actions. Stay away from rage incidents and do everything possible to avoid such situations. Pulling your gun on an unarmed citizen because he cut lanes without signaling or because he’s trying to pick a fight, is just a way to escalate the situation.

For most of us, our concealed carry is like a Visa card and we don’t leave home without it. If you’re lucky enough to live in an area with a low crime rate and well-established communities, you might not need to carry it with you. In fact, weather or not to carry your concealed weapon depends on where you are going.

However, criminals do not respect the gun free zones and they won’t stay away from places where guns are prohibited. As far as concealed carry goes, if you believe a place is not safe, you should avoid it all together if possible. When that’s not possible and trouble arises, my honest opinion is the criminal should not be the only one who is armed.

Concealed carry doesn’t imply that you should use your gun at some point in time. However, if you have no other alternative but to use deadly force you should always know the law. If you are not faced with a threat of a deadly force or severe bodily injury, using deadly force to remove the threat is unjustified.

When using your concealed carry without a justified reason, you could face civil and criminal liability. Even more, when you are in the right, there is still the risk of being arrested, indicted or sued in civil court. In some states, you must retreat even from a deadly threat while others have the ‘stand your ground law’. Concealed carry requires for you to know the law and learn what to do before you use your weapon, but also after you have been involved in a shooting.

As a general rule, concealed carry requires the proper mindset and carrying etiquette. Your gun should never be seen as a problem solver and it’s better to de-escalate a conflict rather than using your concealed carry. Even more, you should acknowledge that using unjustified deadly force will bring consequences that you should prepared to handle. The gun should be under your control at all times and not the other way around.

This is How Our Ancestors Managed To Survive Without Technology

Quick Tips to Safeguard your Home against Looters