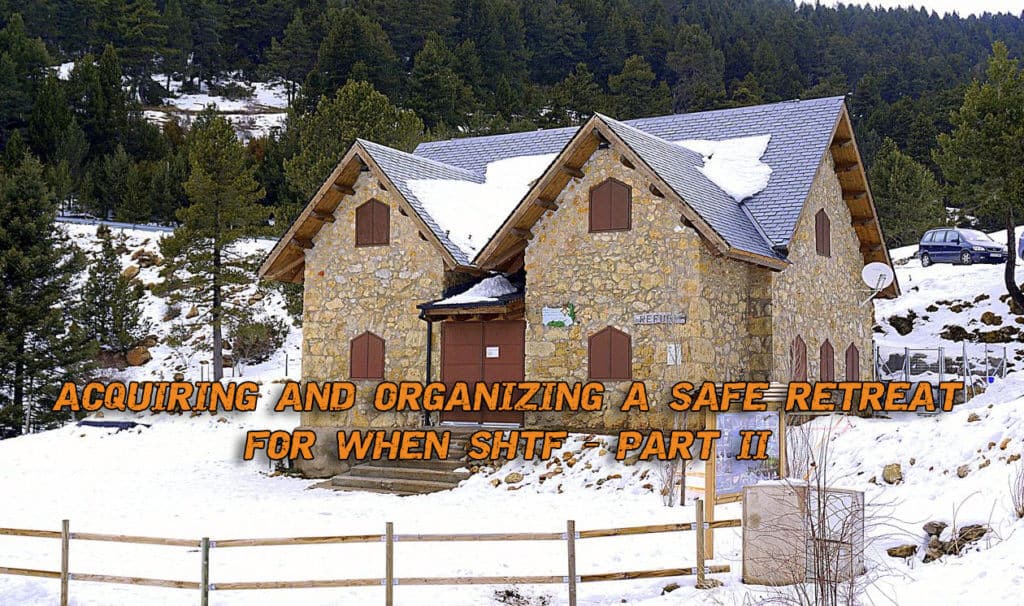 In the first part of this article we discussed the need to have a safe retreat, how to pick the land for it and various other suggestions that should help you choose a proper safe retreat for when the brown stuff hits the fan.

In this article we will discuss about self-sufficiency methods to employ in order to make your safe retreat a place for thriving and not just surviving.

Now, it’s time to look into ways to equip your retreat with supplies and how to protect it. After all, the safe retreat you pick should evolve with you, in time, depending on how long you will be using it.

Supplies for your safe retreat

Preparation of a retreat is a major step toward a viable survival plan. However, the best prepared retreat is not worth much without a basic stock of supplies with which to start up. Without going into what supplies may or may not be essential to survival, some method of storing those supplies and equipment will be necessary to protect them from exposure and vandalism.

If the storage area will be unattended, then a cache site will probably be the best alternative to stocking supplies in the retreat dwelling. The cache site should be located in some place accessible to the survivalist, but which will not draw unwanted attention. Underground cache sites are the easiest to conceal and may be hidden under flower beds, ornamental shrubs, woodpiles, or anything else which strikes the survivalist’s fancy.

Related article: A Prepper’s Cache, An Aid During Harsh Times

One method for preparing an underground cache site is to use a 30 to 50-gallon oil drum or its equivalent with a replaceable top. Individual items can be wrapped in multiple layers of plastic garbage bags and will remain protected for extended periods of time without appreciable damage.

Food items must be protected from rodents and other pests which might break open containers and damage the contents. Any above ground sites must be well concealed to protect them from discovery by inquisitive passers-by. Accidental discovery of valuable supplies and equipment by someone else could result in the loss of the cache and for this reason above ground cache sites aren’t to be recommended.

For the same reason, abandoned mine shafts aren’t practical cache sites, although they can afford effective protection from the elements. If the retreat site will be under continuous observation, then cache sites do not take on the importance as they do when supplies can’t be watched.

In this case, existing facilities can be used. Caves, mines, barns, or other existent facilities can be improved with the installation of shelves, better protection from the elements, pest control measures, etc.

The Garden is a must for every safe retreat

Food protection should rate fairly high on the list of improvements to make. This means a garden of some type is needed. A garden must be tended if it is to produce. This accomplishes two things: providing experience in growing foodstuffs, and providing a ready source of provisions to supplement those stored by the survivalist.

Only non-hybrid varieties of produce should be cultivated, because most hybrid varieties are sterile and will not reproduce a second generation. All crops grown in the garden should produce the seeds for the next season’s crop. Because establishment of a retreat is almost by definition a long-term investment, the planting of fruit and nut bearing trees can be a wise move. They may take several years to reach bearing size, but the minimal care required by them makes them an excellent asset.

Also necessary for self-sufficient food production, domestic animals have a place in the planning and preparation of the retreat. While foraging may or may not provide the bulk of the survivalist’s diet, it would be foolish to rely on that means.

The husbandry of domestic animals provides a ready source of both food and draft animals. Horses are excellent transportation assets, but a good bull and a couple of cows is probably a better investment for food production.

Recommended reading: Is Your Family Ready For A Milk Cow?

Cattle can be trained to serve as draft animals and accept harness for plowing, towing a cart, or any of a myriad of other tasks, and will also provide milk, butter, and cheese, as well as meat in the form of calves every spring. Cattle are not competitive with man for food resources, and are more or less self-sustaining, requiring little real care.

Goats are another excellent form of domestic animal, and being very hardy, require minimal care. Goats are browsers, much like deer, and as such, will survive on underbrush and other forms of vegetation that cannot sustain cattle. While goats are not suitable for use as draft animals, they are good sources of dairy products and meat.

The husbandry of domestic animals will require the construction of fences and pens, if for no other reason than to keep them home. Pens also serve the purpose of keeping the animals closer to the retreat, preserving their familiarity with the human presence.

Habitat improvements can significantly enhance the availability of wild game in the vicinity of the retreat, and deserve a place in the planning and preparation of the retreat. These improvements can range from improving natural water sources with catchment basins and dams to improving food sources, such as selective clearing of underbrush and sowing cover crops such as oats, vetch, clover, wild rice, and so on.

The random distribution of brush piles and other cover can improve the availability of small game such as rabbits, squirrels, and game birds. Salt blocks and feed troughs can be a major enticement to deer and other large animals. Game cultivated in this manner should never be hunted for sport. Hunted game becomes spooked, making it harder to take, should the time come when it becomes necessary Identification of the types of game to be found in the area of the retreat, as well as locating the areas where each species can be found, can save valuable time and effort if foraging becomes necessary.

The concept of sharing and helping others is a very good one, and has been practiced on a large scale in this country, dating back to our first settlers. However, there are people in today’s society who don’t believe in the principle.

In the event of major disaster and panic, there exists the possibility that some of the people who now make our streets unsafe will attempt to take by force that which they have neglected to provide for themselves, with little intent of sharing with the original owners.

This necessitates some planning for the possibility of, protecting the retreat, or getting away alive.

While it is not a good idea to completely clear the area around the retreat, because that can call needless attention to it, some selective clearing probably will be required to provide good fields of fire. Fields of fire should extend to the maxi-mum range of grazing fire from the defensive positions. (Grazing fire is the area covered by a bullet that doesn’t get more than one meter above the ground.)

For normal small arms, the planning distance for grazing fire is about 350 to 400 yards. Dead space, the area that can’t be covered by direct fire, should be covered by other methods, whether they are obstacles to keep the attacker from using the area or some type of area coverage weapon.

Improvised flame weapons or mines can effectively cover such areas. While the possession of explosive devices is against the law, any legitimate explosives on hand at a critical point in time can be used to make improvised claymore mines or other explosive devices.

Defensive positions must provide a maximum of cover and concealment to the defender, and should not be obvious to the casual observer. Positions can be disguised as flower beds, rock piles, firewood, or any of a number of other things. A shallow hole with 6 to 12 inches of dirt in front of it does not qualify as a defensive position, and does not provide any significant protection from small arms fire.

Positions have to be substantial to provide protection and need to be deep enough to get completely out of the line of concentrated small arms tire. Frontal protection needs to be a minimum of 18-24 inches of dirt to stop concentrated tire. Where possible, mutually supportive positions should be constructed to prevent positions from being overrun one at a time.

Suggested reading: 5 Guns Every Prepper Should Own

Obstacles can be an effective way to channel attackers into areas more advantageous to the defender, as well as denying access into areas which would put the defender at a disadvantage. Properly placed obstacles, such as cactus, thorny hedges and wire entanglements can cause anyone who approaches the retreat to expose himself and make identification easier.

Given thorough defensive planning and preparation, large capacity assault weapons may not be an absolute requirement in the defense. However, their inclusion and the inclusion of parts required to make them more combat ready will serve as additional insurance.

Thorough defensive preparation can serve as a deterrent in itself, convincing would-be attackers that an assault would be more costly than beneficial.

At the same time, the survivalist should keep an open mind and realize that the time may come when it may be more expedient to abandon a retreat and move on. Therefore, the defensive planning should include plans for covered and concealed withdrawal routes out of the retreat.

A well concealed cache of essential supplies located some distance from the retreat can mean the difference between discomfort and disaster should abandonment of the retreat become necessary, so this possibility should be carefully considered in the defensive planning. In the eventuality of major disruption of society, the mere fact of survival will depend on the amount of planning and preparation accomplished beforehand.

Very few people are qualified to survive with no prior preparation. Anything which can be accomplished now any knowledge gained now, will be inestimably more valuable at that time. Today is the time to prepare and when those preparations pay off, the dividend is survival.