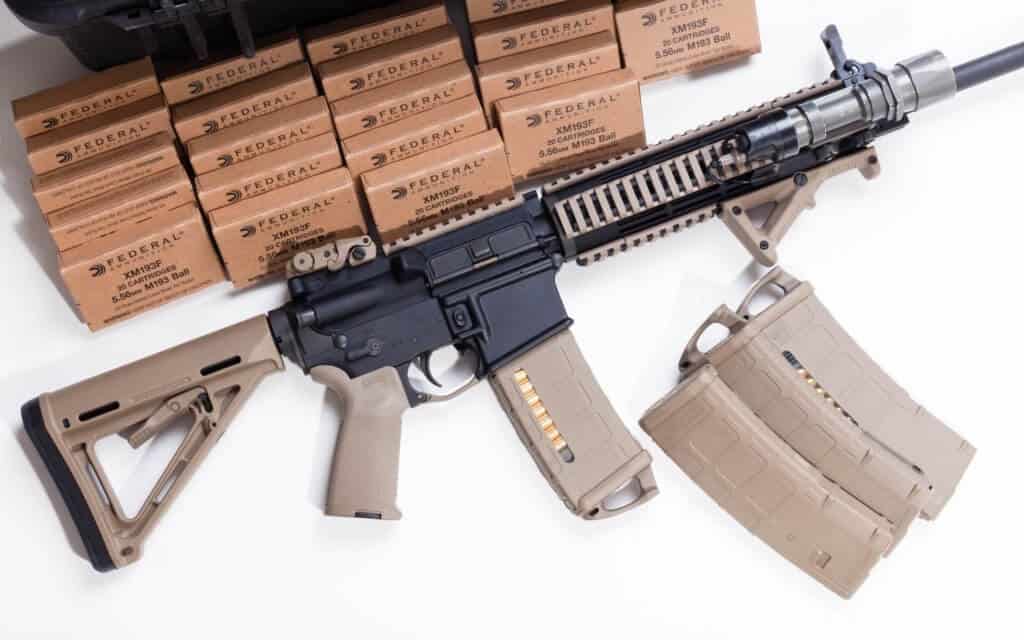 A few weeks ago, we wrote about how to build an unregistered survival rifle using hand tools. The rifle we theoretically built was a good ole’ AR-15 sporting a 16” barrel and chambered in 5.56/.223, arguably the two most common rifle rounds ever sold in America.

This week, we’re breaking down why the AR-15 may be one of the best survival rifles ever made. Let’s look at how the AR platform satisfies the most important requirements of a survival rifle, including hunting, personal defense, performance and range, maintenance, and reliability.

Personal defense is arguably the most important factor of any SHTF weapon, so let’s review why the FBI chooses the AR-15 for its SWAT and Special Operations teams.

In a SHTF scenario, the threat of violence, looting, and trespassing climbs considerably. We don’t need to look far back in history to know this. The 1992 L.A. riots and the 1977 New York City blackout both saw widespread violence and looting.

The Myth of Over-Penetration

Modern shooters often claim that high-velocity rifle rounds like the 5.56 NATO and .223 cartridges over-penetrate when fired in close quarters. Over-penetration greatly increases the risk of collateral damage and unintended injury or death.

Except the AR-15 doesn’t over-penetrate. In fact, the FBI (and most law enforcement agencies) continue using the AR platform to conduct close-quarters operations because of this reason.

The FBI Ballistics -Tests the AR-15

In all 13 tests, the .223 cartridge was found to provide enough wounding but did not over-penetrate materials such as wallboard, plywood, internal and external walls. The FBI concluded that “.223 is considered safer for urban and street engagements because of its inherent frangibility within cross-compartments created by such environments.”

Basically, the FBI says that missing your target with .223 will present a much lower risk of collateral damage or over-penetration into other structures when compared to handgun rounds.

The average .223 bullet is just slightly wider and longer than a regular .22 LR round. Yet its small size is compensated by extremely high velocities. The result is a rifle round that when fired at a soft target or tissue, quickly fragments and causes critical wounding.

Forensic Pathologist Martin Fackler conducted 5.56/.223 wound channel research for the U.S. Army. He found that the average 55-grain M193 rifle round lost stability, yawed (turned sideways) 90 degrees, and broke into fragmented pieces after penetrating 4” to 5” of soft tissue at a distance less than 100 meters.

Dr. Fackler noted that the round’s high velocity creates a “large stretch cavity” upon penetration, causing the tissue to violently tear and weaken around the primary wound channel.

Few weapons can provide the same close-range maneuverability and safety, and medium-range performance like the AR-15. The U.S. Military and American law enforcement agencies train shooters to engage targets using 5.56/.223 out to 300 meters or more.

Historical data illustrates that most combat engagements with rifles occur at distances of 400 meters or less. In fact, the Red Army conducted research in WWII and collected the following data:

Dr. Fackler also recorded that when striking a target up to 200 meters away, 5.56 and .223 cartridges will still fragment, creating two large wound channels. Ballistics data also notes that 5.56 and .223 continue to form a flattened, accurate trajectory out to over 400 meters.

All this data illustrates three important facts that make the AR-15 a perfect survival rifle:

If you needed any more use-case justification, you only need to look at what ammunition is now being sold on gun store shelves. Winchester’s Power Max Bonded .223 cartridges are now hugely popular for hunting deer, providing expansion and wounding that’s comparable to other big-game cartridges.

And regardless of configuration, the AR-15 can be disassembled, cleaned, and made operable again in less than 10 minutes. Performing basic maintenance and stripping the rifle of its main components can be accomplished using little more than an improvised pry tool and your digits.

In fact, the AR-15 is one of the only weapons you can literally build from scratch using basic hand tools, a receiver blank (called an 80% lower) and little to no experience.

We could look at more research to determine just how reliable the average AR-15 is. Instead, we’re going to look at some real-world testing done at a gun range. Henderson Defense runs Battlefield Las Vegas, an in-door machinegun range that rents M249s, mini-guns, and yes, full-auto AR-15s.

The range rents weapons that see literally millions of rounds per year. When asked in a Q&A what weapons they found most reliable, they had this to say about the classic AR-15 design:

AK’s get to about the 100,000+ round count and rails on the receiver will start to crack. It’s an easy fix with TIG welding, but they crack. We have yet to lose an [AR-15] upper or lower receiver from cracking. We get about 20,000 rounds out of bolts before we start experiencing issues.”

Keep in mind this kind of reliability is being proven in a fully automatic M4 that is abused daily. Your commercially-bought or -built AR-15 will only fire semiautomatic. We also wager you won’t be mag-dumping 30 or more rounds at a time, dramatically reducing the amount of wear-and-tear your rifle suffers.

Interestingly, Henderson Defense even stands by the AR-15’s original direct-impingement gas system as a source of reliability, eschewing more complicated piston systems that other rifles use to operate:

“We no longer use ANY piston conversions or factory-piston guns with the exception of the HK-416 ‘knock-off’ TDI upper.”

This is one of few examples we can find that illustrates a weapon’s factory design is more reliable and capable of handling extreme abuse than an aftermarket or even factory-upgraded counterpart. If you wanted absolute proof of the AR-15’s reliability in its original configuration, here it is.

If you’re building or buying a black rifle to prep for a SHTF scenario, then you need to do so with the mindset that your weapon of choice must be reliable and its ammo readily available for the rest of its (and your) life.

That means investing in a weapon with ammo and parts that can be found no matter where you are. The simplest logic says that you should, therefore, buy a gun that pretty much everyone else already owns.

The AR-15 is likely the most-sold firearm in the United States. Its ammo is one of the most common and most affordable anywhere. In fact, the National Shooting Sports Foundation (NSSF) estimates that there are 16 million black rifles in circulation today. Nearly every American police department has elected to use the AR-15 as their patrol rifle of choice.

In the context of long-term prepping (or even going through a real disaster or SHTF situation), this means the AR-15 is the most accessible source of small arms weaponry and munitions you’ll likely ever find.

As always, here’s the short-n-sweet: The AR-15 is a perfect survival rifle for a few big reasons: It’s safe and incredibly effective in close-quarters combat, with no risk of over-penetration. It can take down most body armor, and it’s effective out to 300 meters or more, where most engagements occur. It’s so reliable and simple, you could build at home with no experience.

Some full-auto AR-15s have been abused at ranges, with more than 200,000 down the barrel. Those rifles are still functioning reliably with basic parts replacements. Speaking of, the black rifle is the most-sold and available firearm in the country, meaning parts and ammo will be more readily available than other firearms.