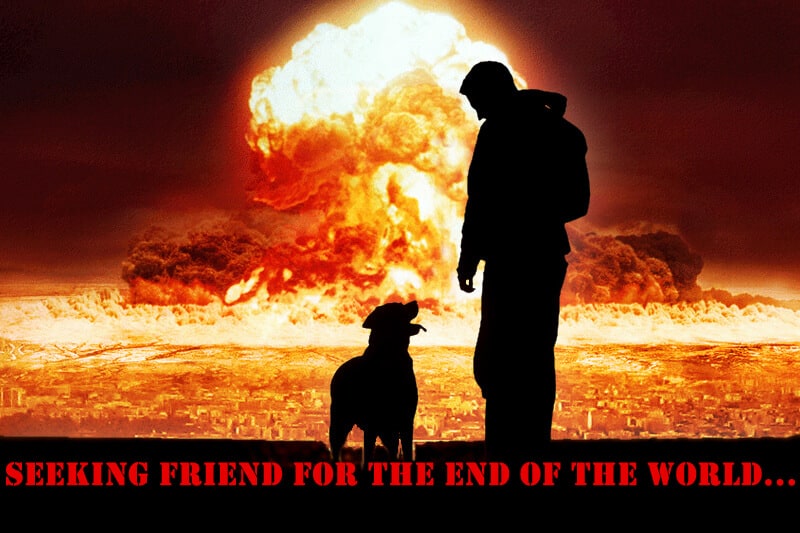 Hardcore survivalists and preppers cherish the lone-wolf scenario when the world of the end comes. However, seeking a friend for those harsh times might do you some good. Besides the company, other people will give a helping hand. The end of the world may not seem so bad if you aren’t alone.

It goes something like this: The world is crumbling and cities are collapsing into mayhem. We, the preppers are well equipped for the end of the world. We are the last chance of humanity since we can withstand anything faith throws at us. Our society is no longer built on everyday trust and neighborly reliance, but do you want to be alone in the end?

Do you really want to be alone for the end of the world?

Contents hide
1 Do you really want to be alone for the end of the world?
1.1 Related reading: How to bug in and survive.
1.1.1 “What can I do to connect with my friends and neighbors when it comes to preparedness matters?”, you may ask.
1.2 You can start practicing mutual preparedness:
1.2.1 You may also like this article: Barter items you should have for SHTF.
1.2.2 Related article: The Eight Principles of Emergency Evacuation
1.2.3 Related reading: The 10 principles of effective family survival
1.2.4 A last word regarding the end of the world
1.2.4.1 Other Survival and Preparedness solutions you may like:

The world around us is full of unfriendly strangers and nobody cares anymore about the person next to him. If the other guy doesn’t take care of himself…well, then to hell with him and his legacy. It’s a dog eat dog world and only the fittest survive. The media keeps bombarding us with nothing but violence, tragedy, and sadness. In their eyes, it’s already the end of the world and it’s either us or them!

And it is true, in any major, long-term disaster, preppers and survivalists could face deadly threats from desperate and unprepared people. The only problem when it comes to “them” is that they are much more numerous than us and a lone-wolf scenario doesn’t work like in the movies. There’s no one to yell “Cut!” when a scene goes wrong and life doesn’t give you do-overs.

The fact is, for most of the rural people, one of the biggest things they’re going to face in the event of SHTF is this: a need to join forces with others who are in the same boat and who share similar beliefs.

We need a circle of well-prepared friends for the end of the world more than we need five guns and a ton of ammo. We need to make connections with trust-worthy people for when SHTF. And, we need to do this because there is a preparedness truth that some of us chose to ignore: no matter how well prepared we think we are, we will always lack something.

Related reading: How to bug in and survive.

You need to start preparing to count on each other. You need to get together with neighbors and friends and enhance each other’s preparedness. And it’s not something you have to do out of altruism, but out of pure practicality. In the end, the goal is the same: we’ll all be better off when SHTF.

When the end of the world comes you will need the help of others.

“What can I do to connect with my friends and neighbors when it comes to preparedness matters?”, you may ask.

Well, you shouldn’t go running and tell everyone that the end of the world is coming. Don’t tell people what you stock, where do you keep it and what guns and ammo you have stockpiled. You can’t go around asking people ” Now show me yours”.

You can start with small steps. If some real disaster has recently struck your area, the aftermath gives a perfect opportunity to go to your neighbors and do a mutual check. Find out what they run out of, where they screwed up and what they can do differently next time.

You can get this info just by discussing with your neighbors without appearing to organize any sort of preparedness league. You can even make agreements with them. For example, you could store some extra gasoline for them if they help you with medical emergencies or anything else that you might need for the end of the world.

People are always worried about something because self-preservation is part of our nature. You have an opening to discuss preparedness. You may very well approach the people from your community now. Don’t tell them you are preparing for the end of the world as they might think you are crazy. Bring up for debate topics related to disasters/threats that are happening or are most likely to happen.

You can start practicing mutual preparedness:

Instead of selling your farm produce to your neighbors, start seeing what those neighbors might have to barter for them. Barter will be more useful than money in a serious disaster. It gives you a chance to know the people you are bartering with.

Get involved in a food co-op because you can always establish a cooperative network based on the main element: food. They may be open to the idea of organically grown crops, hormone-free meats or bulk food purchases on a budget.

If somebody in your circle of preppers has a pick-up truck and others don’t, the truck owner can offer to transport goods for a small fee or for barter. The same goes for any other type of machines that can be used by the community.

You can find some neighbors and sign up for and commute to skill-building classes together. It doesn’t matter if you learn about first aid, home canning or defensive shotgun use as long as you do it with somebody else. It will help you stay committed and motivated to the activity but also to the people.

You may also like this article: Barter items you should have for SHTF.

Start offering to do things for your neighbors. However, ask them to do things for you. Do this even if you can actually take care of everything yourself. It’s a good way of bonding and getting to know each other’s skills. It provides a good opportunity to learn who you can trust and whether you yourself are trustworthy.

If somebody close to you, especially relatives, feels unable to prepare for a disaster, see how you can change that by helpfulness and gentle persuasion. When you talk with certain people about preparedness, they are reticent. Often times they feel overwhelmed, too unskilled or too poor to handle it all. Everybody is vulnerable to something and being prepared doesn’t mean you have to become an expert prepper. They may not want to prepare for the end of the world, but they might do it for their own reasons.

You have to make sure you increase your odds of survival and you have a fighting chance. Having a bug-out bag will make a huge difference. Knowing how to fortify your home will keep your family safe. Everyone can start with small steps if the mindset is there.

Garage sales are good occasions to know your neighbors and to stock up on preparedness supplies. You will be able to discuss with people from your community and know more about their prepping plans. If someone sells a camp stove because he never used it and thinks he never will, then that person might not be into prepping. But if someone sells a similar item because he got a better model, you might have some common topics to discuss. It’s all about knowing your neighbors and you can tell a lot about a person based on the stuff he owns.

With those, you must trust, talk openly about others in your community who might become a problem in harsh times. Those who are clueless about fending for themselves will get desperate and might become real troublemakers. Thieves or chronic freeloaders will bring down the community.

Everyone deserves a chance. I’m willing to consider it for people who ask for one in the first place and are willing to work for it. I don’t give second chances to those who “make a mistake” and ask for forgiveness. When SHTF, there will be no luxury such as second chances and you must act first in order to survive the fall.

Safety in numbers will save you and the community. Your home could be on a map outlining evacuation routes for your area. The government could make your propriety an assembly area just for the fact that it is situated above the flooding zone.

Regardless of the scenario, there could be many who will come your way and most of “them” won’t have peaceful intentions. What then? You can’t keep up your fort for long if you are all alone. Joining a militia or having a group of trustworthy friends will help you deal with the masses. If some will try their luck on you, nobody will be foolish enough to go against a number of well-armed individuals.

Another aspect that we need to consider during a crisis is what to do with friends and family. Those that come rushing in, knowing you’re a prepper and your home is a safe haven. I know a few people that said: “if the end of the world comes we’ll just move in with you”.

Although it sounds like a joke, I’m pretty sure it isn’t. There will always be someone who knocks at your door during a time of need. Unfortunately, you just can’t turn your back on them. Or will you when the end of the world comes?

They are the “friendly freeloaders” and although you are well intended, odds are you won’t be able to take care of them forever. This is why they need to be integrated into your local community and here is where it gets tricky.

If you are a lone wolf you won’t be supported by your community. Even worse, you will be seen as a threat if you bring in outsiders when things turn bad. However, if you have a good reputation amongst your peers if you have the same interests.

If they know how the skills of someone can help the entire community, it will be much easier to integrate others and give them a job insides the community. It is important to show how the new arrivals can help everyone and it can be done much easier if there is room for debate.

A last word regarding the end of the world

No man is an island. We should make sure we have someone to spend our time with when the world around us dies. The government will tell you to wait for their help, to be passive and rely on experts and outsiders. They will ask you to behave like dependent children and wait for big daddy when in reality, you have people you can trust around you. People, who can help us out or, if need be, take us in.

Would you rather wait alone or turn to others, your friends and neighbors, when the world ends?

5 thoughts on “All Alone For The End Of The World”