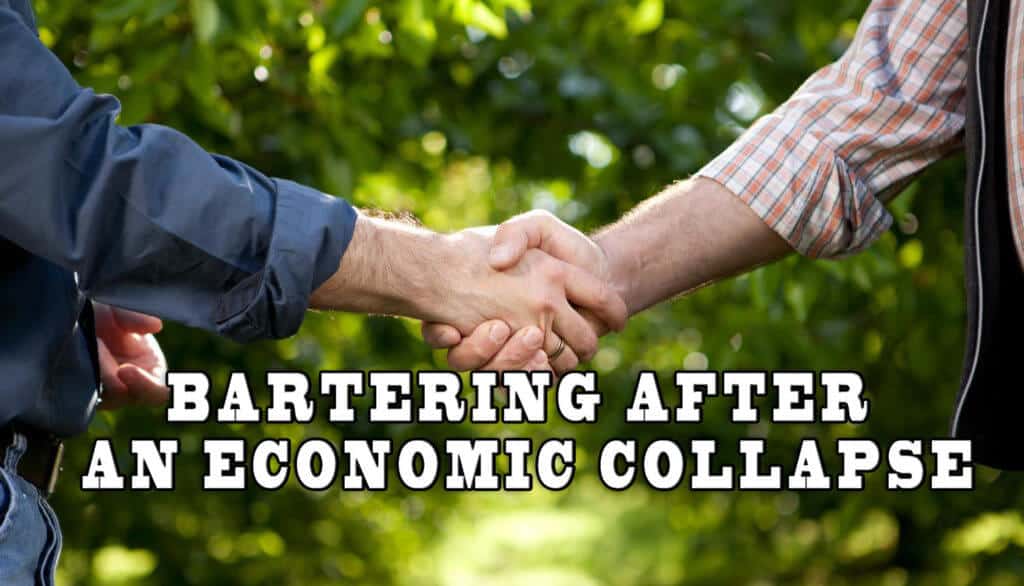 It took just a few weeks for society to collapse after the stock market crashed. Bank accounts were frozen, cash was a rare sight and it was pretty much useless, stores were looted and home invasion was a daily reality. Only a few people can remember what happened during the Great Depression and for most of them, bartering was the only salvation.

Back then, most of the people were farmers and they knew how to grow food for their families. The rest of them had useful skills they could trade for food and other items they would need. Things are different today. Most of the young people seem more concerned about taking the perfect selfie rather than thinking about their future.

There are those who get into prepping and they go straight for the latest and greatest survival items. They build a state of the art bug-out bag and ignore the other aspects of survival. Some people will spend all their hard-earned money on all sorts of stuff they see advertised by survival TV stars and will ignore the basics. Many don’t think about how they would get more food and supplies if they will be faced with a long-term survival situation.

If the economic meltdown will happen tomorrow, how would you get what you need without looting or killing people for their stuff? You could start a garden, but without prior experience, your chances of success are not high at all. If you are the type of prepper that stockpiles items, you could look back to the lost ways and implement a barter system within your community.

After all, bartering is the oldest form of commerce. We’ve all done it one way or the other since we were children. We used to swap lunch with our school buddies, we used to trade baseball cards with our friends and by doing all of that. Somehow, we learned about supply and demand, value and negotiation and some even ended up being successful salesmen.

In a long-term survival scenario, bartering will not be dependent on luck as it would be today. People will need various stuff to survive and you don’t have to wait for that one person that has what you need. Bartering is already making a comeback in various communities, especially in the green-communities from around the world. It will become a reality for Americans when the economy crashes. When that happens you’d better be ready to trade!

Related article: Types of preppers – Which one are you?

Contents hide
1 Bartering methods
1.1 Bartering one-on-one
1.2 Group bartering
1.3 Bartering shop
2 Bartering rookie mistakes to avoid
2.1 Bring only what people need
2.2 Don’t be fooled that the trade crowd
2.3 Try to keep your items before you give them up
2.4 Bartering is a dangerous activity
2.4.1 Self-sufficiency and Preparedness solutions recommended by our readers:

When it comes to bartering methods, you shouldn’t run around town with your stuff and find people to trade with. Depending on the crisis scenario you will have to face, there are various ways to deal with bartering. You should always choose the method that works in your favor and keeps you safe.

This basic one-on-one trading method can be implemented inside your close community and it will start with your neighbors. You should have a prior relationship with them and you could ask them what they need and what they can trade in exchange for the supplies they want. You should not seem desperate and you should choose your words carefully. The discussion should be centered on them so that they won’t feel tricked.

They should always have the feeling of being in control, because a happy customer will always return. You should never give in and tip your hand, unless you desperately need something. Even if you initiate the conversation, the other party should be persuaded into thinking that it would be in their best interest to trade with you. They should assume that only you have what they need.

Don’t try to do a massive exchange of items and start small. Tell them about just a few of the things you can trade and discuss about a short list of items you need. When you enumerate the things you need, never put what is of most importance for you on the top of the list. If you do that you will have to haggle for it. Since the item you need is of “less importance”, the other party won’t put too much effort into haggling.

If you keep it simple, the conversation will naturally evolve. You will have to know the value of your items and their value is usually affected by the nature of the crisis. Once you agree on the items of trade, the next step is to swap the items and be on your way.

This is quite different from the personal one-on-one bartering method. It involves a group of people setting out items in front of them and discussing about their needs. It’s exactly what it sounds like and in order for it to work a group of people must converge in a specific area. In many African countries this is called “trade blankets”. People will lay out their stuff in front of people hoping to get a customer, but side trades will also occur.

Group trading will increase your chances of finding the things you need, but it has a major downside. People will see what you have and take notice. If you made a rookie mistake of bringing more than you should have, it could put you a risk.

If the disaster creates a world in which the law no longer applies, bringing items of great value, that seem unreachable for some (like antibiotics) will only make yourself a target. You may want to hold back certain items. Some people may kill you for them during a WROL situation. When you decide to try group bartering keep some things secret to keep yourself out of harm’s way. First time bring only the items that are not valuable for you, the ones you can live without. By doing so you will feel the pulse of the market and you will better understand what you have to deal with.

Suggested articles: Barter items you should consider for when SHTF

This is a bartering option suitable mostly for the hoarders or the rich preppers. It involves setting up a temporary shop on a busy space or highly populated area. You become a shopkeeper in a post-disaster world. However, instead of getting money for you items, you will take trades. For this option to work, you need to have one or more partners.

The type of people that would have your back if things go south. You have multiple pairs of eyes that can watch out for thieves or guard the items while your party fends off any possible threats. This is the type of bartering that requires strength in numbers to make it work and to keep things under control.

The best part about this method of trading is that you can control the market. People will turn to you, since you are one of the wealthy ones. You can increase and decrease the value of items based on supply and demand or by buying the competition. A barter shop can be organized even for trading skills, and a family who owns a variety of skills, can trade their services for the goods they need.

Bartering is a skill that requires practice in order to be developed. Do not expect your first trades to go as planned and in fact, for many, it will be an awkward or scary experience that will leave them with the short end of the stick. You will feel that you could have gotten more for your items, and that might be true at first.

Bring only what people need

The type of the crisis dictates the demand for certain items. It will increase and decrease the value of the items you trade. For example if there is a general blackout, electric generators will worth their weight in gold, while freezers will not worth much and will just become oversized containers. You should avoid to barter items that are obsolete, broken or items that are simply useless during the crisis that is in effect.

Don’t be fooled that the trade crowd

Most people who enter a store, marketplace or any other social gathering that promotes the selling or trading of stuff, will get the impulse of buying or in this case, selling stuff. Just because you brought some of your stuff to barter, it doesn’t mean you have to trade them from the first try. Look for the stuff you need first. Get the stuff you want only if you can spare the items you brought.

There is also a method practiced by souvenir shops in many countries, the pity sale. Old people or kids trying to sell you stuff you don’t really need. You end up buying it just because you feel sorry for them and you think you can change something. The same tactics will be used for trading stuff in a world when money has no value, and you shouldn’t fall for it. You don’t owe people anything and you are better off without their junk, just walk away.

Try to keep your items before you give them up

Our forefathers used to trade their services in exchange for the goods they needed. This is the oldest method of bartering. You can do the same if you have the proper skills. Before you trade your items, you should ask if the person in front of you needs some professional work. Anything from dental, to carpentry or butchering could be traded as stand-alone item of great value. To tip the scale in your favor, you can even throw in some items together with the services you offer. This will provide high-value items for the person you are bartering with and will seal the deal.

Bartering is a dangerous activity

Bartering requires a safety net and you should always have a backup plan. You should trade only the items you can live without and you should count on someone (friends or family) to guard your back if things get rough. If someone wants what you have and they can’t seal the deal, they won’t forget about it.

The items you brought out can make you a target of theft and even murder. You can give up what you have or you can count on your backup to defend what’s yours. The same rules apply for you as well and bad trades can create trouble if you try to trick people. If you trade bad items or useless stuff, be prepared to face the consequences.

Barter is far for being a perfect system, but this ancient skill will help people function as a society during a post-disaster world. Although it requires patience, understanding of value, keen observation and people skills, bartering is a survival skills that will help you get the things you need.

Everybody wants money and it doesn’t take brains to use them. However, if our currency will lose its value, bartering will be the easiest and most practical system of trade. Bartering is one of the elements that helped build the society we know today and it will help maintain it even when the world gets rebooted overnight.

Self-sufficiency and Preparedness solutions recommended by our readers:

1 thought on “Bartering After An Economic Collapse”