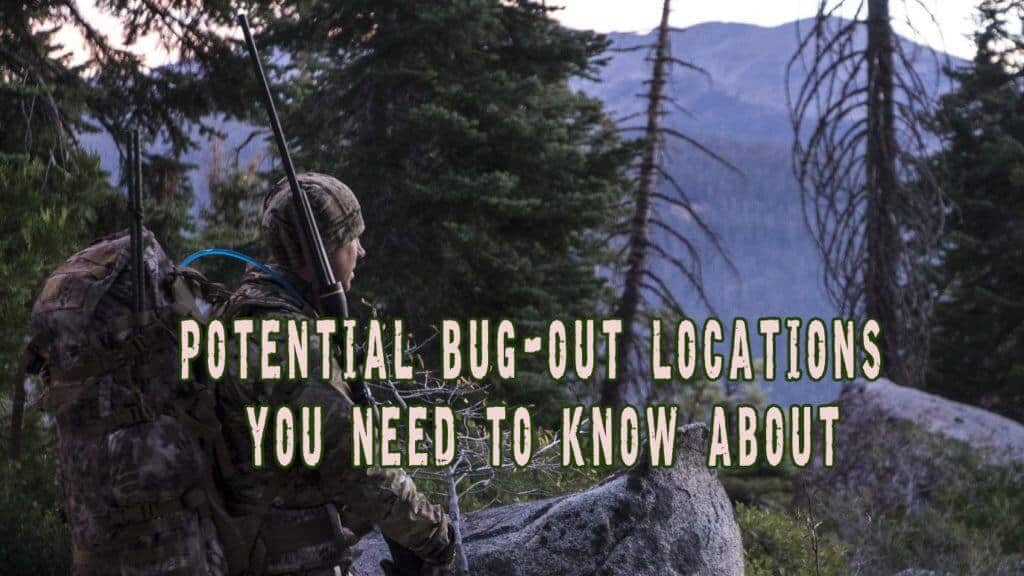 If disaster strikes and you need to bug out, to survive without facing the less desirable elements of society, you would need to have access to a vast tract of roadless land. As you will see from this article, in our country, many potential bug-out locations provide many thousands of acres of uninhabited wilderness.

When you plan for bugging-out, it will be helpful to look at the different kinds of uninhabited land available today in the United States. There are many categories of areas that we could consider as potential bug-out locations. You need to know how to find these lands and how to get there.

If you love to go hiking, camping or hunting, you probably know by now that there is an abundance of federal lands available for such recreational purposes. We are one of the few countries in the world that has such a high acreage per capita of open lands that are free to all to use. It is estimated that U.S. federal government owns almost 30 percent of the entire nation’s land area. This means that nearly 650 million acres of land are free for the taking. This will be viable if the world changes overnight and local laws no longer apply.

During a long-term disaster, those living in cities and suburbs who do not own private lands in the country will be the first to look for federal lands. Even more, the chances are that wherever you live, there is a federal land within reach. They can be found in the form of national parks, national forests and others.

Although many think that there would be a high competition for these lands, the nature of the disaster, the preparation plans and the knowledge of the people will dictate the survival outcome. Most of the people you know, probably don’t even know what bugging out means, let alone prepare for it. Those who manage to escape the cities will settle on the pieces of land they find. They will establish bug-out locations out of need, without prior prepping. They will become post-SHTF pioneers and just like the original forefathers, only the strong will survive.

The parks managed by the National Park Service are not ideal bug-out locations. These are well-known and high profile locations established in areas of natural beauty or historical significance. Since these parks are set up as tourist destinations and sanctuaries for the plant and animal life found within their boundaries, many people will instinctively think of them as perfect bug-out locations.

After all, when you have to face a crisis and you need to get away from it, you will think of places that seemed like a perfect heaven for you. Places where you went when you were younger, where things are kept in order and where you felt somehow safe. Many will go to the national parks because these places are well mapped. These areas will provide an abundance of wild game.

Suggested reading: Choosing land for an Off-grid or Bug Out Location

Many of the remote wilderness areas of the national parks require ‘backcountry permits’ for camping. If you are not a resident, you will not be able to legally carry a firearm on parklands. Due to the strict rules governing the national parks, many survivalists have made them a destination for teaching and practicing wilderness living or survival skills.

If you decide to go to these parks when disaster hits, you won’t have to worry about patrolling rangers enforcing park service rules. However, you will still have to pay attention to those who got there first. Even so, since some national parks contain millions of acres, you may never encounter another human being if you set your camp in a remote, off-trail backcountry location.

Most of the residents in every region will know about the major national parks from their area. They have a pretty big idea how to use them to their advantage. However, those who head there, merely because they don’t know anywhere else to go will have a hard time surviving if they are unprepared.

Today, it is estimated that the U.S. Forest Service manages almost nine percent of all the land in our country, with national forest totaling about 200 million acres. The mandate of the Forest Service is somehow different from the one of the National Park Service and you have more options when it comes to using these lands. Besides recreational use, you also have limited use of natural resources. Hunting and fishing, timber cutting, mining and prospecting are all activities that are allowed on National Forest Service lands.

You have dirt roads for the vehicles of your choice, but there are also areas where motor vehicles aren’t allowed. These lands are a preferred destination for many because they provide a freedom that cannot be found anywhere else. You can camp for extended periods of time as long as you don’t stay in one site longer than fourteen days. You can carry firearms to hunt and you could drive for miles efficiently using an ATV or off-road motorcycle.

There are also the designated wilderness areas that can be visited only on foot or horseback, with the sole purpose of preserving the land in a pristine state. The millions of acres of entirely roadless land where little sign of human impact can be seen. These places are favorite locations for primitive survival enthusiasts.

In a bug-out situation, the national forest lands will become a safe haven for hunters and would-be survivalists and they will compete for the resources these areas provide. They will have their sights set on national forests because having no roads, trails or obvious drainages will make it easier to leave the unprepared crowds behind and evade the pursuit of confrontation.

The Bureau of Land Management Lands is a government agency that currently manages almost 260 million acres of federal lands in 12 western states, including Alaska. Everything from forests, grasslands to deserts is controlled by the BLM. Some of these large tracts of land are desolate wilderness areas that considered as ideal bug-out locations by many. However, some of these BLM tracts are incredibly remote and they are little-known to outsiders.

The locals are the main people who would know how to make the best use of these lands. It is highly probable that they will use them as safe heavens and stand their grounds when interacting with outsiders. If you happen to live in the western states, it is a good idea to look into the BLM lands available near you.

Related article: Survival myths that will get you killed

Most of the navigable inland waterways and recreation areas along rivers and man-made lakes. They are built for water supply reservoirs, hydroelectric power of flood control are supervised by the U.S. Army Corps of Engineers. The uninhabited land along the major rivers and lakes is available for hunting, camping and other recreational use. These forgotten areas are ideal for long-term camping or off-grid living enthusiasts. Setting up bug-out location on these lands will become an option. Especially for many of those who know how to live off the land. For the people that are not afraid to go off the grid.

A water source in the vicinity is one of the main key points you need to be aware of when looking for off-grid land. Having a water source near your bug-out location has many advantages. You can use it for farming, for fishing and even for creating electricity.

Many people are not aware that some of the large tracts managed by the federal government under this system were purchased by private organizations. These type of lands will become private property when the government laws will no longer be in effect. There will be a lot of competition between those looking to start over. These lands are similar to the ones owned by the first pioneers. They provide the perfect conditions for the preservation of the main endangered species during SHTF, the humans.

Many states also maintain state parks and state forests. However, they are on a much smaller scale than national parks and national forests. Some states allow the recreational use, while others offer wildlife refuges or game management areas. Many consider state lands as ideal bug-out locations because some of the state-owned preserves are extensive in size.

Although the size and management of state lands vary widely, chances are you could find the perfect spot for a bug-out location. However, since many of the unprepared will go for the woods, you will need to find a secluded place and lay low until the competition diminishes. The state and federal governments own vast tracts of lands, but they are not the only ones. Some of the uninhabited land in the United States is privately owned. Although not all this land is preserved in its natural state, there are those lands used for private hunting clubs or other recreation activities. Most of the private lands are abandoned or seldom visited by absentee owners. Some of these lands are inherited family lands.

Their owners live and work far away in other states or cities. Although these are private lands, it would be unwise to discount their potential as bug-out location. Everything is permitted in a world where the right to property is questionable.

In a disaster scenario, trespassing on private property could get you in trouble. Most landowners will probably shoot first and ask question later. However, some of the private lands are inaccessible and hard to patrol, and it would be impossible for the owners to keep track of every person passing through or even temporarily living there.

If you identify a private land that has excellent potential as a bug out location, you have to options: check and map the property and claim it as your own during a SHTF scenario if the owner doesn’t show up or discuss with the owner and agree to both use it as a bug-out location. The owner will benefit from your survival knowledge and skills, and you will benefit from the land and its resources.

Now that you know the options you have for potential bug-out locations, it is time to do some research. Try to identify the most convenient piece of land near you. If you wait until something happens and just head off into the unknown, even if you are prepared and have a state of the art bug-out bag, you will only be one of the many homeland refugees. You will have to fight off the competition. With today’s technology and the abundance of information, you can find online. You can do quite a bit of research to identify the possible bug-out locations from your state.

Recommended off the grid and survival solutions: