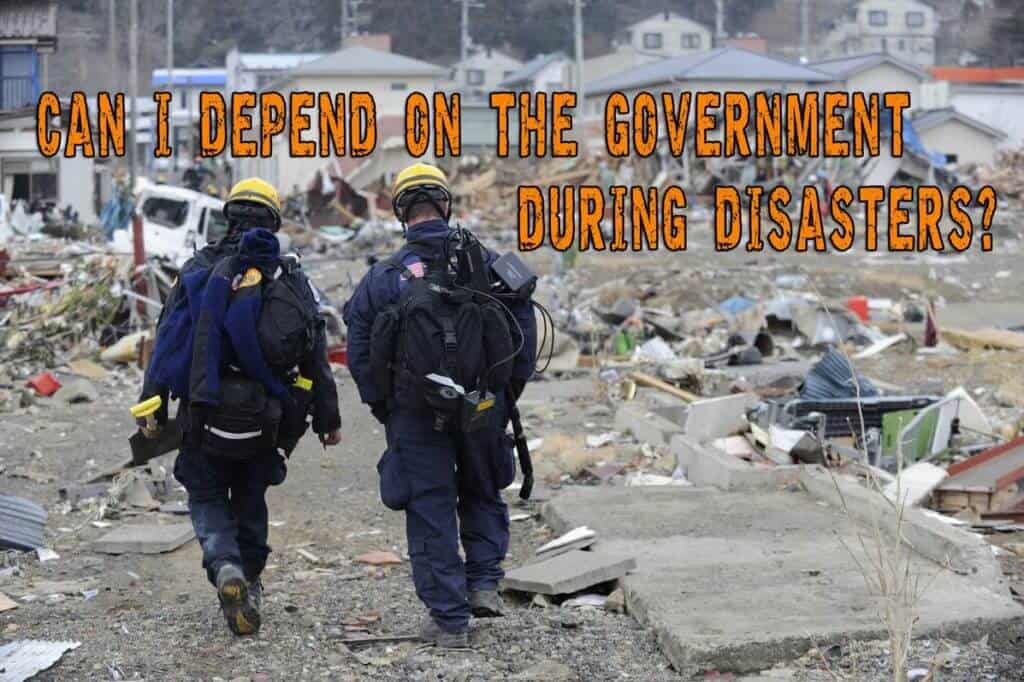 Society nowadays believes that no matter how hard things will get, there will always be a beacon of help in the distance. We rely on technology and others to provide us with everything we need to have a good life. In fact, many people are convinced that there will always be someone to look over them, may it be a divine force or a local form of government. Seeing how things are changing, we should all ask ourselves simple question: can we rely on the government when SHTF?

Humans have a tendency to believe that the future will be better than the present. Time Magazine once wrote about this phenomenon, calling it the opt HYPERLINK.

People who participated in the survey that Times referenced were found to believe that society was getting worse but that they would be unaffected by change on a personal level. For example, a parent may believe that if the job market of the future was highly competitive, that their child would have little to no problem finding a job.

Those who took the survey may have believed that in the face of economic trouble, physical threat, or severe emotional trauma, they and their families would somehow prevail over catastrophe.

When it comes to facing disaster, we have to be careful about our own optimism bias. We must be aware that if something bad happens, there may be no rescue except what we ourselves provide.

It may just be that things aren’t quite as good as they seem to be.

The gravity of Disasters

In my experience, it seems like people always believe that someone or something will rescue them if things get bad enough. When it comes to high-level disasters that preppers like to discuss such as EMPs, electrical grid failure, war, or so on, it seems like the vast majority of people in the world believe that the government will not allow things to get too bad, or that if things were to get bad, the government would be able and willing to fix the problem.

But to truly determine how much we can depend on the government during a disaster, we first need to define exactly what a disaster is.

For the sake of simplicity, I’ve divided disasters into three categories: low, mid, and high level. These types of disasters are ones that only affect a relatively small number of people. A low-level disaster may be a thief in your home, a fight breaking out somewhere, a personal health issue, or a wrecked vehicle. While low-level disasters are painful on a personal scale, they are frequently over within a few minutes (as is the case with a fight or burglary) and usually won’t affect more than 5 or 10 people. These can usually be controlled to some extent.

Mid-level disasters are situations that affect many people, but are not the end of the world type scenarios. Many natural disasters fall into this category. A loss of electrical power, snow trapping you in your home or vehicle, an earthquake, or a bad flu strain (like the one we had in early 2018) all qualify. Mid-level disasters usually take time for the full effects to be seen and are often almost entirely out of our control.

High-level disasters are the ones that people often think of when they think of prepping. A high-level disaster is an event that is entirely out of our control. It usually affects large numbers of people for significant periods of time.

High-level disasters would be wars, famines, extreme weather, situations when you are forced to leave home for extended periods of time due to danger, etc. Other things like EMPs, mass disease, and martial law would fall into this category as well. Remember that we have no control over high-level disasters except to prepare for them beforehand.

Governments are motivated to accomplish the following objectives.

This list is not exhaustive but covers all the big ones.

For each level of disaster, government response will be different. In many situations, such as the most common low-level disasters like robberies or fights, the event is over so quickly that the government will be unable to intervene.

Related article: Preparing For Doomsday – Is It Worth It?

While we can expect some help after the event in low-level disasters (like police follow up), the event is almost always finished by the time that the government can offer aid.

For other types of low-level disasters such as an illness, a personal mental health issue, a wrecked vehicle, and so on, the government has no motivation to intervene and because of that, will not do so.

Because of the government’s desire to offer stability to citizens, they will intervene in violent scenarios after the problem has occurred. However, they will almost never take action during a personal disaster like illness or repairing/replacing a wrecked vehicle.

For low-level disasters, we are often on our own.

In a mid-level disaster such as a small earthquake or a snowstorm, some government aid can be expected but is often slow in coming. I remember a snowstorm that hit not too long ago being dubbed “Snowmageddon” where people were without power, snowed in, and stuck on the side of the road in their cars.

Even in disasters such as localized snow storms, the government is more or less restricted to salting the roads. This is undoubtedly helpful, but it is hardly a worthwhile gesture for families who are unable to eat in their homes due to loss of power.

Where I live, I remember that it took nearly a week for all the trees to be cleared off the road and power to be fully restored. My family had no problems due to our food and water storages, but our neighbors were not so fortunate. We had to share a significant portion of our food with them because the government couldn’t help.

This is just one example, but remember that this was only one incident and government help was nearly nonexistent.

For mid-level disasters, we are often on our own once more.

But what about high-level disasters?

This is where we must remember the government’s motivations: maintain government, ensure safety, promote prosperity, and offer stability.

In high-level disasters like EMPs, war, electrical grid failure, famine, or severe viral outbreak, the government’s number one priority will be to protect its own existence.

Everything else comes second.

The government’s first move has been and will always be to make sure that it can function tomorrow. Your lives, your family’s lives, your community’s lives, and even your state’s lives all come in second, third, fourth, or fifth place when compared against the almighty mandate of government survival.

In a high-level disaster, the government’s first move will be to make sure that it is protected.

The government’s next move will be to eradicate foreign enemies at home and abroad. This will be done at almost any cost, since destroying enemies also goes back to mandate #1: protect the government. So if we happen to have foreign or domestic enemies, the lives and rights of citizens will be up for grabs and largely unprotected.

It is in these scenarios that martial law begins to blossom.

The government’s third order or business will be to promote prosperity, which essentially means preventing an economic collapse. This sounds good but may lead to the government locking down bank funds, stopping stock market trading, or other drastic monetary measures.

Interest rates and inflation could go to the moon or hit rock bottom overnight, going well into the negatives. If true disaster struck, we could expect market investments to halt or drop to lows not seen in years. Rations are also a possibility that has been enforced in the past.

In the face of disaster, the government’s attempts to promote prosperity may be nearly worthless.

Finally, the government will attempt to establish and ensure order among populations. And I’m just speculating here, but I imagine that ensuring stability will be quite the chore at this point.

Imagine with me: many stores are out of stock. Due to rapid interest rate decreases, the markets are in shambles. The rates for savings accounts, CDs, or other funds are in the negatives. A new ration on sugar and fuel has been imposed so people are missing their sweets and can’t go as far to work, which means some are now unemployed.

The government can’t even keep all cities stable in today’s climate (hello Detroit, Chicago, St. Louis), much less in the situation I just described. There will be riots and rebellion. It is not a fantasy situation to imagine looting and unrest or disobedience in areas where people gather.

If the disaster is too small, the government is unwilling to help. If it is too big, they are unable.

This article has been written by Tony for Prepper’s Will. If you like it, make sure you check out his website at Prep Survival Guide.

1 thought on “Can I Depend On The Government During Disasters?”