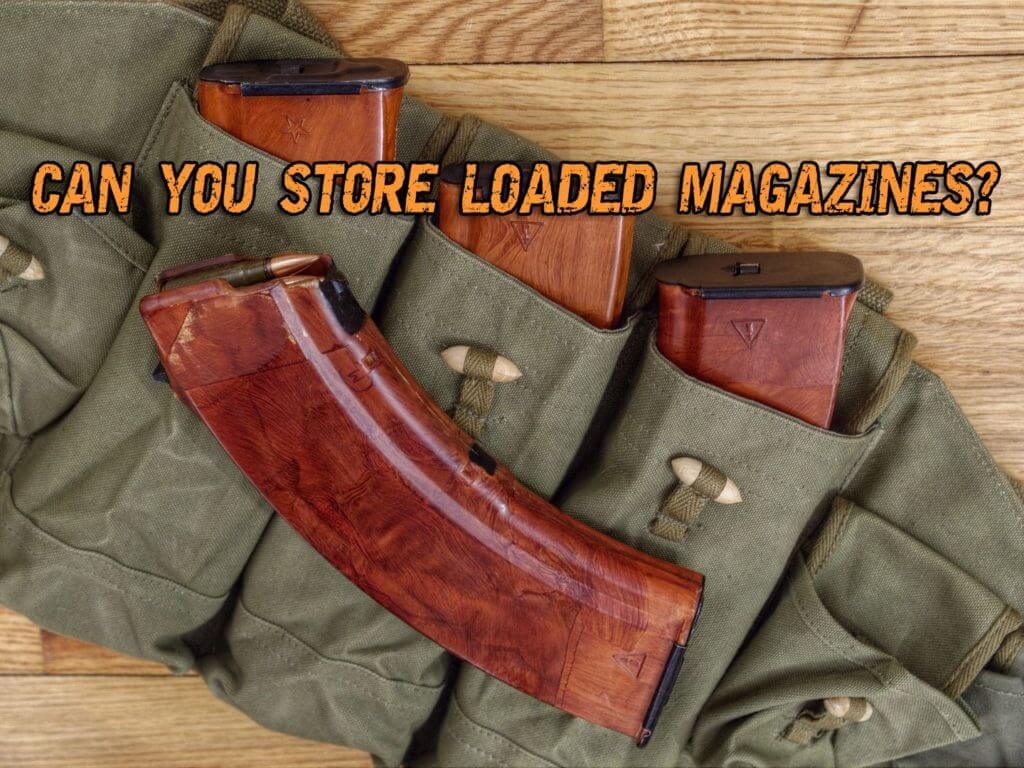 Can you store your magazines loaded? It’s a question often debated among preppers, but the answer never really seems to be “yes” or “no”. Some say it’s perfectly fine, nothing will happen to your magazines. Others say your magazines’ springs might lose some tension or fail completely.

And some say that you should rotate your magazines – keeping them empty for too long could make them unreliable when the time comes to use them.

Contents hide
1 What gives?
1.1 The science of magazine springs
1.2 How a magazine spring works
1.3 Hooke’s Law (how a spring makes force)
1.3.1 “Magazine tension equals the spring’s stiffness multiplied by how much distance it’s compressed”.
1.4 X is always constant
2 Spring stiffness (K) and what affects it
2.1 Elastic deformation
2.2 Plastic deformation
2.3 Spring fatigue
2.4 Spring creep
3 The long-term magazine storage test
3.1 Related article: Top 6 AR15 Under $1000 Worth Buying
3.1.1 Loaded: 5.982”
3.1.2 Empty: 5.733”
4 The test causes no loss of functionality
5 How to interpret these test results
6 How long do other preppers store their magazines?
7 Why you should rotate your magazines
7.1 1. It keeps your ammo safe
7.2 2. It allows you to maintain your magazines
7.3 4. It gets you to the range
7.4 5. Yes, it prevents magazine fatigue
8 The final verdict
8.1 Summary
8.2 Other Useful Resources:

The science of magazine springs

We’re setting out to finally put this debate to rest with science and facts. Let’s break down the science of magazine springs – or really, compression spring physics in general – and then figure out how that affects the function of your firearms.

So, how does a compression spring work? What forces are at work, and how might those forces cause (and prevent) a spring from deforming over time? Let’s take a look:

How a magazine spring works

All magazines use compression springs. Whether you’re storing 30-round magazines for an AR-15 you built with an 80 percent lower, or a 9mm Glock with a standard 17-rounder, you can apply what you learn in this guide to any magazine you store:

First, we need to know the scientific principle of Hooke’s Law. Hooke’s Law says when a spring at rest is compressed with force (in this case, by the action of cartridges being loaded into the magazine), it creates an opposing force.

For the sake of our question and argument, it can be read as,

“Magazine tension equals the spring’s stiffness multiplied by how much distance it’s compressed”.

In our equation, force (we called it magazine tension) is a measure of how much the magazine’s spring can push back against all those loaded cartridges. The more force there is, the more reliably the magazine can cycle rounds through your gun.

This force (F) is called elastic potential energy. Remember that for later.

And remember, K is the spring’s stiffness. X is the distance the spring was compressed.

Obviously, X is constant in our situation. Your magazine’s length will never change, and when you’re storing your magazines, we’ll assume you’re storing them fully loaded. This means the distance your spring is compressed (X) is always the same.

But there is another constant at play in this formula, too: K. Officially called the spring constant, K is the value we’re investigating to answer this whole question.

Does K (the spring constant, or stiffness of the magazine spring) change over time from being stored fully loaded?

Spring stiffness (K) and what affects it

Basically, if spring stiffness (K) and compression distance (X) never change, then your spring’s ability to push cartridges up into your firearm’s receiver (F, or force) will always be the same. This would mean yes, you can store your magazines fully loaded forever, and nothing will happen.

Elastic deformation is just the temporary deformation of the spring as its compressed and returned to its normal state. Every time you load your magazine with cartridges, you’re elastically deforming (compressing) the spring.

Plastic deformation is a permanent deformation of the magazine spring. When a spring is compressed too far, it might permanently lose some of its stiffness and force.

Magazine springs are designed to handle an amount of compression that is greater than their total capacity. If they weren’t, plastic deformation would be an inevitable issue, but it isn’t.

Spring fatigue occurs when a spring has been repeatedly compressed and returned to rest. Basically, fatigue is the eventual loss in some spring stiffness and force because of repeated use.

All springs suffer fatigue as they do work, but magazine springs were designed to handle tens of thousands of rounds with little to no fatigue.

In fact, you’re more likely to literally shoot a gun to its absolute limits, stripping the barrel of rifling and making it unusable before you wear out a magazine from loading and shooting it repeatedly.

Spring creep describes a spring’s permanent loss of stiffness from compression over a long period of time. This is the big factor in question. This is the real “thing” everyone wants to get to the bottom of.

So, the real question is: Does storing your loaded magazines long-term cause so much spring creep that they’re no longer reliable?

We could get into all the science, look at formulae, and talk about how spring diameters, coils, and alloys could affect spring creep. We’re not going to do all that.

Shooters and preppers like you have already put spring creep to the test. One scientific shooter on Youtube by the username Shadetree Armorer conducted a long-term magazine storage test using 12 handgun magazines of various makes.

He created two groups: A control group (empty magazines), and a test group (fully loaded magazines), and ran the test by storing all magazines in the same conditions for a set period of time. He then unloaded the full magazines, disassembled all magazines, and compared the resting length of each magazine’s spring before test-firing both groups to check for spring failures.

Although the test uses a small sample size, there are few variables that would affect the test results. We compiled the data from Shadetree Armorer’s test in a graph below:

Calculating his data, we get the following averages for spring length, loaded vs. empty:

After approximately 5 years of being stored fully loaded and empty, Shadetree Armorer’s magazines only showed a 4.16% difference in spring length at rest. The results display just a small amount of plastic deformation being caused by some spring creep.

But are these test results significant? Does this 4.16% difference in resting spring length correlate with a significantly lower amount of spring stiffness and force? Will this difference affect magazine functionality and reliability?

The test causes no loss of functionality

Shadetree Armorer went on to shoot all loaded and unloaded magazines. He used the same ammunition and firearms for both magazine groups without any failures to eject, chamber, or cycle.

Again, this test is a small sample size. Nonetheless, it illustrates that after five years of storage, fully loaded magazines did not show any signs of failure.

Does this mean it’s safe to store your magazines fully loaded, long-term? Probably. The sample size for this test is small, but the length of time the test was ran is significant enough to consider the results when you decide whether you’ll store your magazines loaded or empty.

How to interpret these test results

Whether a spring shows some deformation after long-term storage has never really been a mystery. We see from our test that this is the case. If you’ve had a carry weapon or “just-in-case” gun lying around loaded, you can probably compare its magazine to an empty counterpart and see the same results.

We can’t say whether this deformation is significant, but we can interpret the results of the test: Storing a loaded magazine for around 5 years probably won’t cause significant deformation.

The real question has always been: How long should I store my loaded magazines for? Will 10 years cause significant deformation? 20 years? We can’t say for sure.

Can anyone else say?

How long do other preppers store their magazines?

But all those answers generally average out to a rough timeframe: A few weeks to a few months. Most police departments cycle their magazines every 90 days. This is also what we recommend for magazine storage.

Why you should rotate your magazines

Can you store your magazines for five years, knowing they’ll operate reliably when the time comes? Probably. But there are other reasons why you should consider rotating them more frequently:

1. It keeps your ammo safe

Storing ammunition long-term isn’t as simple as chucking it into a magazine and forgetting it. Ammo’s designed to resist the elements, but moisture can take its toll on primers and powder over time.

Lead and jacketed bullets can corrode, even when stored inside. Rotating your magazines ensures that no set of ammo is sitting around for long periods of time, un-checked.

2. It allows you to maintain your magazines

Magazines require care if you want them to be reliable when it counts. Rotating your stored magazines gives you time to inspect them, oil them, remove any corrosion, dust or dirt, and check their functionality.

4. It gets you to the range

If all your ammo is just sitting around in storage, you’re not prepping the right way. Being a shooter takes frequent practice. If you want to defend yourself in a “SHTF” scenario, you can’t just dust off the cobwebs and expect good results.

Protecting yourself, your property, and your family means getting to the range and practicing good marksmanship. This also prevents excessively old (potentially unreliable) ammo from hanging around.

Even though our shooter’s test showed no significant magazine fatigue after five years, we still say it’s a good practice to rotate your magazines to eliminate any chances of spring fatigue.

Not all magazines are made equal. Some use thinner coils, some deal with larger, heavier casings. On the other hand, some are higher in capacity than others, and some exert different spring forces.

In the end, this entire topic comes down to one final question: Are the benefits of storing your loaded magazines greater than the benefits of occasionally rotating them?

Can you store magazines long-term? Yes.

Too long, didn’t read? Here’s the short-n’-sweet of the thing:

Magazines are already designed to be safely stored for long periods of time. Even storing a magazine loaded for 5 years or more will cause just a small amount of permanent spring deformation. This process is called “creep”. Based on simple testing, this creeping deformation will probably not cause your magazines to work unreliably.

You should still rotate your magazines. It only takes a few minutes to unload and reload a magazine. Doing so gives you the opportunity to maintain your gear, inspect your magazines, and ensure your ammo’s not corroded or damaged.

6 thoughts on “Can You Store Loaded Magazines? The Final Verdict!”