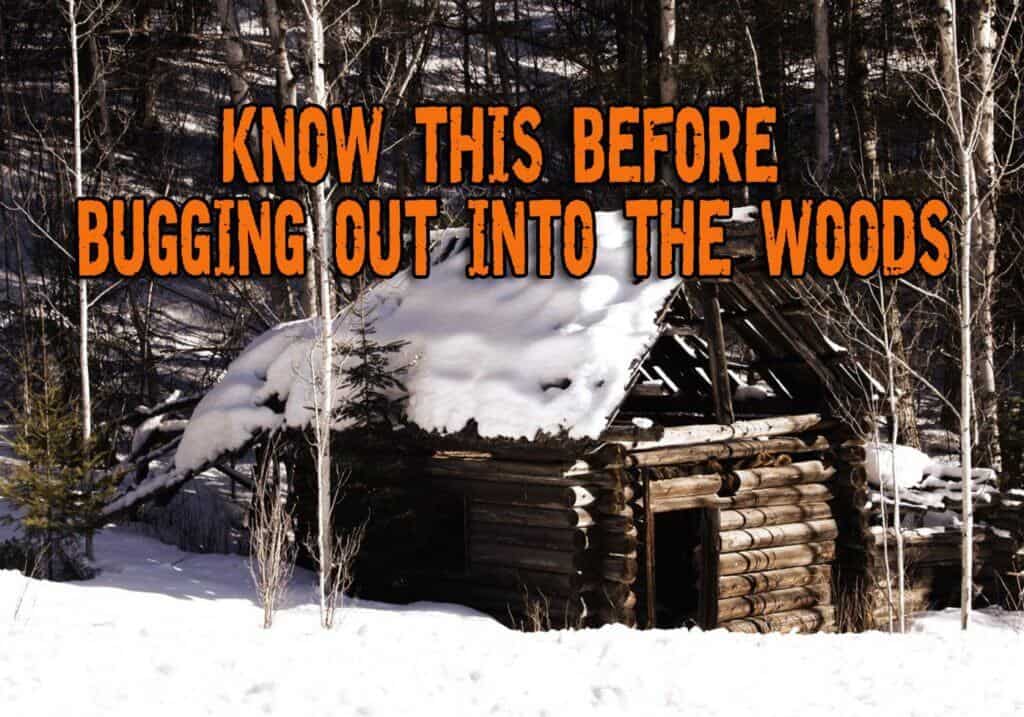 I spend a lot of time on forums and social media discussing about bugging out with other preppers. It’s a topic that should be covered by everyone since one day you might be forced to leave everything behind in order to survive. Bugging out into the woods is a common plan for a lot of people, but there are a few things that shouldn’t be ignored if you plan to follow the same path.

No matter how much we prepare and how well we have everything covered, there are a few things that always get underestimated. Bugging out into the woods will eventually force you to live off the land, and you will pay greatly if you’re not prepared for such change. This topic often attracts a lot of information since it’s one of the most popular ones. However, not everything shared out there could be classified as good information.

Most folks say that once it hits the fan, they will grab their bug out bag and head for the hills. They are certain that bugging out into the woods is their only chance of survival. Even more, they say that they will live in the wilderness for the rest of their lives or until things get back to normal.

Things are much more complicated than most people assume and there are a few things you should really consider before bugging out into the woods. If you do not follow a precise plan and pay attention to the rules, your extended camping trip may end sooner than expected.

Considerations before bugging out into the woods

Contents hide
1 Considerations before bugging out into the woods
1.1 It’s not like in the movies
1.1.1 Related article: Eight Survival Myths That Will Get You Killed
1.2 It’s all about action and energy
1.2.1 Recommended article: Ten Survival Hunting Essentials
1.3 Timing and season, your worst enemies
1.4 You are not alone
1.5 The isolation syndrome
1.5.1 Suggested article: The Importance Of Sleep When Bugging Out Into The Woods
1.6 A final word about bugging out into the woods
1.6.1 Other Useful Resources:

There is an increasing survival-themed trend promoted by Hollywood and general media and they usually paint an idyllic picture of living off the land. The heroes of such productions are often depicted as experts and they all manage to provide all the necessities without a struggle. They always prevail in the end and they make everything seem easy. This is why most people believe that could pull it off as well as long as they have the needed gear and knowledge.

The reality is completely different and anyone who managed to live off the land will tell you it’s better to avoid such scenario if possible. There are even survival instructors that recommend against it. They can teach you all sorts of tricks to start a fire, but even they have a lighter in the pocket. After all, while struggle to light a fire using primitive methods and to waste energy when you have alternatives?

Related article: Eight Survival Myths That Will Get You Killed

You should never rely only on primitive skills when bugging out into the woods. Why take any chances where there are all sorts of items you could use? Even the native people always had to improvise when it came to day to day survival. Some still live off the land, but that’s a lifestyle and not a choice.

It’s all about action and energy

Survival has basic rules that should be applied in any type of scenario, regardless if you’re bugging out into the woods or if you hunker down. All the benefits you obtain following a certain action should be greater than the energy spent for completing the activity.

This is a rather simple concept and it goes like this. If you spend more calories hunting for food than you’ll get by eating the prey, you will not survive for long. It’s like an extreme survival diet, you burn more calories than you eat. However, since the goal here is to stay alive and not to prepare your body for the beach season, you should rethink your strategy.

Expert survivalists know that if you’re planning to rely on wild sources of meat when bugging out into the woods, it’s better to concentrate on fishing and trapping. This are far better options than trucking and hunting game. You should concentrate on conserving energy and at the same time maximize your caches of getting wild meat.

Talk with experienced hunters or fishermen and they will tell you that even they have an off day. While this may not seem a big deal during common scenarios, during a life-threatening event, this is a critical aspect. If you have one or more off days when you’re bugging out into the woods, chances are you may never see another sunrise.

Timing and season, your worst enemies

If you’re bugging out into the woods during summer, things may not look as bad as they are and you can make it for months without struggling. If you know what you’re doing, you can find a lot of wild edibles ready to be harvested. Even more, wild game is much more accessible during the warm season.

How about if you are bugging out into the woods during the winter months? In many parts of the United States, these months will make it extremely difficult to survive. You won’t find anything growing during those times and trapping or fishing becomes much more challenging. At most, you will find some roots, but digging them up requires a lot of energy. You can, however, track active animals since the tracks are visible on the snow.

The thing is that the more time you spend outside during the cold months, the more energy you will spend. You need proper clothing (more than one change of clothes) and tools to survive during these months. Even ice fishing becomes a difficult activity although it seems fun and easy when seen on TV.

You are not alone

Don’t fool yourself, there will be a lot of competition out there. Most often, these bugging out into the woods scenario are planned by many in the event of a catastrophe. The main goal here is to get away as far as possible from other people, which is a clever plan for most scenarios. If you survive the initial impact of the disaster, the aftermath will become problematic since the human factor comes into play. Other people may be the biggest threat to you and your family, and you should avoid confrontations at all costs.

However, you’ll be far from the only person who does the same thing. Everyone will head for the hills, and they plan to use the countryside as their safe heaven when it hits the fan. The problem is that most of these people don’t have a plan like a survivalist or a prepper. They will scavenge their way from one point to the other, cannibalizing and stealing resources with every chance they get.

Even though they might encounter hostile reception from the rural residents, you cannot fend off wave after wave of desperate people. I remember my first hunting trips with my wife and seeing her stumping her way through the forest and complaining about everything was a strange experience. She went through all sorts of emotions, from desperation to resentment and joy when we made camp.

I can only imagine what hundreds of people doing the same thing will look like making their way through the forest. Most of them are not hunters and they will battle for resources. Chances are they will kill each other and everyone caught in between them. Since there are a lot of preppers that love the lone-wolf scenario when bugging out into the woods, there are a few things we must specify. First of all, survival may seem easier if you have to take care of only one person and that might be true. However, what about if you get ill or injure yourself during a hunting trip? Will you be able to still do the simple chores like gathering wood and water? How about if you need to build complex shelter structures to survive the winter? Having a couple of helping hands during a survival scenario is priceless. Trust-worthy humans are irreplaceable resources when bugging out into the woods.

Suggested article:  The Importance Of Sleep When Bugging Out Into The Woods

And second, the human mind can quickly turn on you after even the smallest defeats. Desperation and panic attacks will set in if you fail to provide the basics. Not being able to talk with someone or get even a single advice (no matter if wrong or right) can lower your morale faster than you expect. We are social creatures and we managed to survive by sticking together. You cannot pull someone from his regular environment and expect him to survive and keep his sanity in an unknown environment, deprived of the things he knows and loves.

A final word about bugging out into the woods

When you’re bugging out, one rule states that you should assume you won’t be able to return to your former life and plan accordingly. Growing a garden may provide you with a long-term solution, but you will still depend on your foraging, hunting or trapping, and fishing skills to acquire a meal. You should always plan for ways to prolong your stay into the wild.  Caching tools and provisions is a good idea for such scenario. Learning everything there is to know about a specific area and concentrating on that region should become mandatory. If you’re going for the hills, plan in advance and make sure you always have a backup plan.