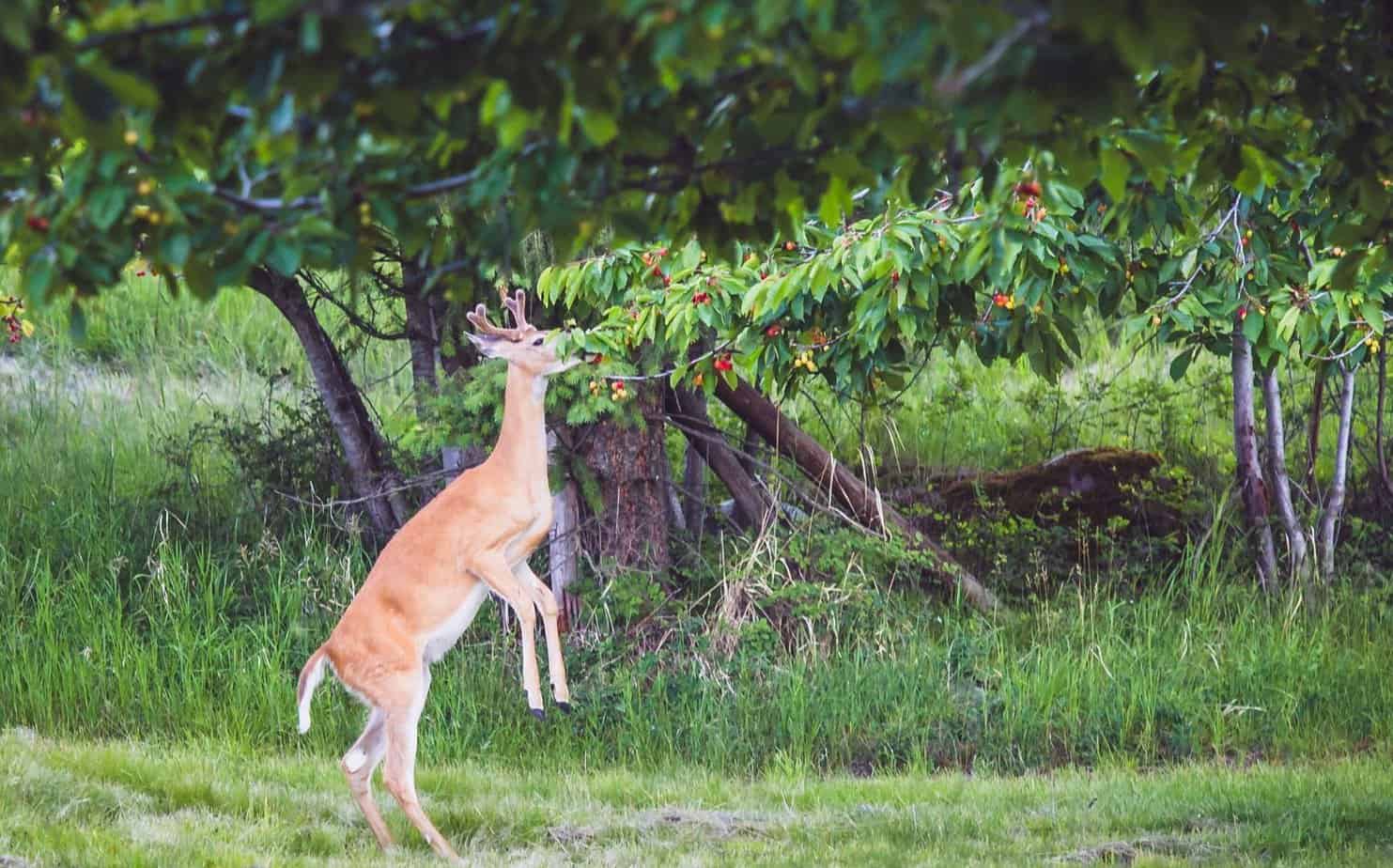 There’s nothing that will make a gardener teeter on the verge of madness more than marauding wildlife. In the spring, rabbits, groundhogs, and ground squirrels (depending on your part of the country) can destroy a newly planted garden seemingly overnight. And throughout the season, wildlife does its best to harvest before you do.

There are ample remedies to deter wildlife pests. Some certainly work, while others are a waste of time and vegetables. There’s no quick fix, but fortunately, there are options to put in your arsenal to keep critters out of your garden.

Make no mistake, deer will eat practically anything. And what’s even more frustrating is that one year they won’t touch a certain plant or vegetable, then they’ll devour it the next. Your number-one weapon is vigilance.

For home gardens and small farms, the best option is a high fence if it’s feasible. And since deer are known to leap (fairly easily) over a 6-foot fence, you need to make it at least 8 feet high. There are a lot of different fencing materials that work.

If you’re concerned about appearances, the polycarbonate Tenax Deer Control Fence is durable and very effective, and the UV-resistant material won’t break down. And it’s much lighter and easier to use than steel fencing. A 165-foot roll weighs only 27 pounds. We fenced off our 4-acre garden, and without it, they wouldn’t be able to grow anything.

We not only have deer, but moose, elk, and black bears also come right up to our fence. In 18 years, only once has a moose broken it, and a bear ripped it. We frequently watch these critters walk up to the fence and then just walk around the perimeter without trying to enter or jump it. I watched a mule deer buck try to jump it, and he bounced off of it three times like it was a trampoline before he gave up and walked around the perimeter to an open gate.

Since an open gate is the Achilles’ heel in a fencing system, you need to keep it closed. Once we left the gate open and there were a half-dozen deer inside in short order. Deer are smart and will take advantage of any weak spots. 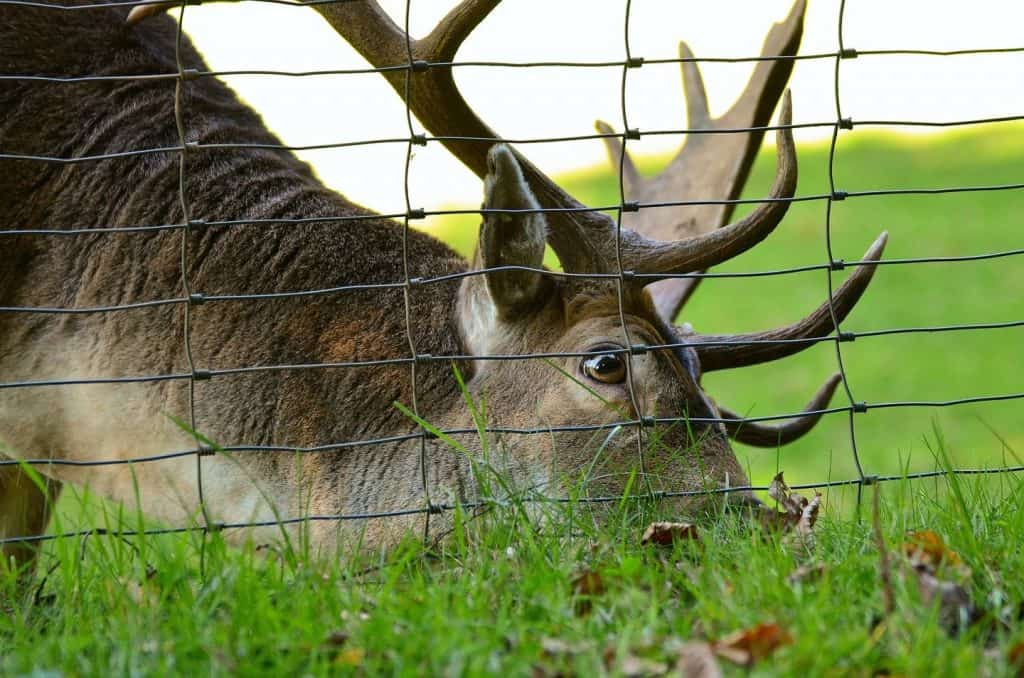 If you don’t want a permanent setup, you can install an electric fence, preferably a three-strand poly-wire or poly-tape system, to handle deer that like to crawl underneath. I’ve had deer tear through the smooth poly-wire in the pasture, primarily because they couldn’t see it. Using the poly-tape seems to work better since it is more visible.

A popular tactic is smearing peanut butter on a survey ribbon or a piece of cloth and attaching it to the wire. When the deer investigate, they receive a nasty shock on their nose. A friend does this every year, and it seems to work well, although if they’re desperate enough, they can breakthrough.

Surprisingly, using the opposite thought process, there was a study by the New York Cooperative Fish and Wildlife Research Unit at Cornell University that indicates using deterrents (instead of bait) with an electric fence is equally effective. This is good to know if you have an excess of coyote urine or similar repellent on hand.

Another non-fence option is the motion-activated sprinkler. It requires only a 9-volt battery or two AA batteries and needs to be attached to your garden hose, which is left on. When the deer walk within the 30- foot zone, it shoots a couple of blasts of water in their direction.

This has worked extremely well for us, as well as a number of landscaping clients. The deer don’t become accustomed to it. Actually, neither do people. I can’t count the number of times it has surprised me!

The sprinkler works very well for small areas, particularly in very visible ones. As a bonus, it deters cats and dogs as well.

I used to feel sorry for Peter Rabbit. Not anymore. Cute little bunnies have no qualms about coming into the garden and devouring plants at practically any stage, and during the winter, they can do equal damage to shrubs and trees by chewing around the base.

The most effective course of action is a fence. Bury the bottom at least 6 inches deep in the ground, preferably creating an “L” shape where the bottom section reaches outward from the garden. It should be 24 inches high. Some folks recommend even taller fences, but it’s also important to be practical so you can step over them.

Repellents work for a short amount of time, although most of them are not to be used with edible plants. It’s also a bother to have to replenish them frequently. 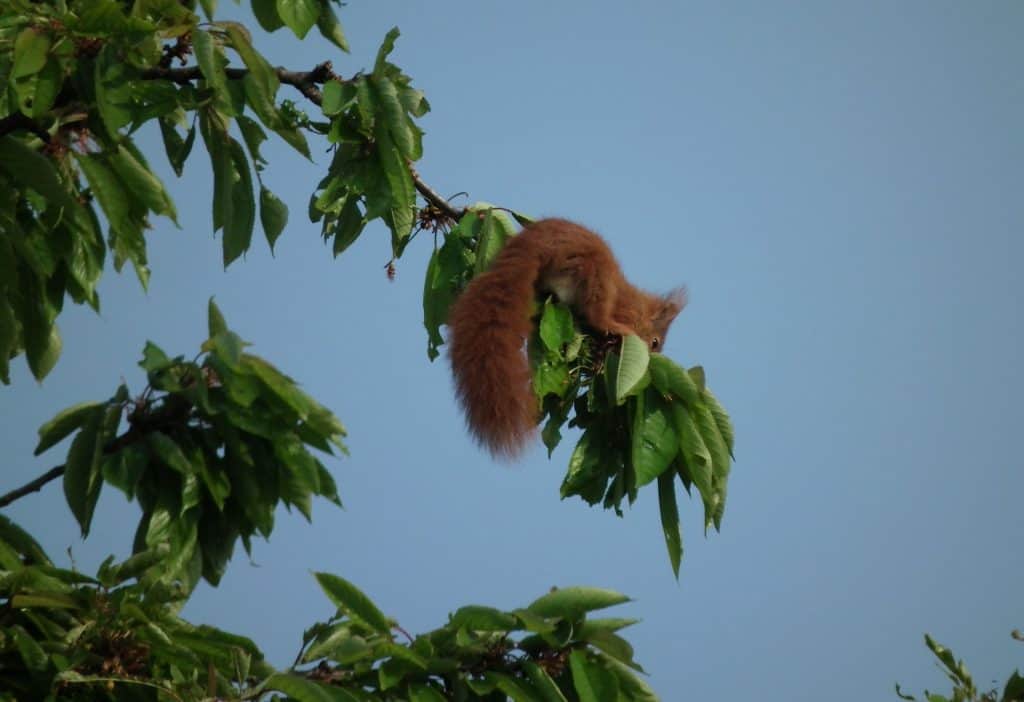 Here where we live, ground squirrels do much more damage than rabbits. From early in the spring into fall, they are quick to dash into the garden, chomping as they go. In the early years of the community gardens, they were a plague to the new gardeners.

Since many of them did not wish to harm the squirrels, they tried every repellent possible: cayenne pepper, mothballs, garlic, and even put out bubble gum (which, if the squirrels eat it, causes a horrible death).

Some gardeners fenced their plots with the same style of fence you’d use for rabbits, which did work for them, but at one point, the bulk of them requested more draconian measures.

Poison has been a longtime remedy to eliminate ground squirrels, but it’s a concern around children and pets. There are also gas cartridges on the market that you place in the tunnels after sealing up any other entrances—then just light the fuse and cover up the hole.

They produce a toxic gas that can be harmful to pets and children if they inhale the fumes. It’s another situation where you have to be very careful, and poison may not be the best option for most people.

The most effective way the community garden folks around here eliminated the ground squirrels were with guillotine-type trap outside of fence barriers. Placed at the entrance of their tunnels, the spring-powered top slide falls, quickly killing them when they emerge. It works very well.

The one drawback is that you must check the traps on a regular basis, sometimes two to three times a day at the beginning of the process, to remove the dead squirrels, and it might take a couple of weeks to reduce the population. But since the gardeners got control of the numbers of ground squirrels in the area, they haven’t had problems for years.

Pocket gophers are a little different than ground squirrels because they’ll grab your plants from below. They can do a lot of damage to shrubs and trees as they chew off the roots. You can also tell the difference if you have mounds of soft earth forming in and around your garden versus open holes.

Once again, poison and gas will work, but traps specific to pocket gophers are just as effective in the long run. You’ll have to scoop out some of the soil from the tunnel in order to create enough room to slide in the set trap. Then anchor it with a stake and place a board over the hole to block the light.

You’ll also want to flag it, so you know where they’re set in case you have a number of them in the field. Check your trapline regularly.

When it comes to critter control, there is a lot of confusion between these two species. Moles eat insects, earthworms, and grubs, but don’t go after plants. However, as they move through the earth, they tunnel and can damage root systems. It doesn’t matter to them whether it’s a field or your vegetable garden they’re destroying.

Voles are herbivores that will eat pretty much any vegetation. They’re known to cause a lot of damage to trees and shrubs in the winter when they tunnel up to them, oftentimes under the snow, and chew off the bark. If you see a lot of smaller holes, you most likely have voles.

Either way, there are ways to keep them from destroying your garden. The most humane method is to bury a 1/4-inch wire mesh fence at least 18 inches deep. You only have to bring it above the ground level 4 to 6 inches high, and it’s most effective when you bend it outward. This way, you create a barrier they cannot cross in their search for food, whether it’s a tasty grub or the roots of your broccoli.

There are also snap traps, such as mousetraps, that you can bait with peanut butter and place at the entrances to their tunnels. 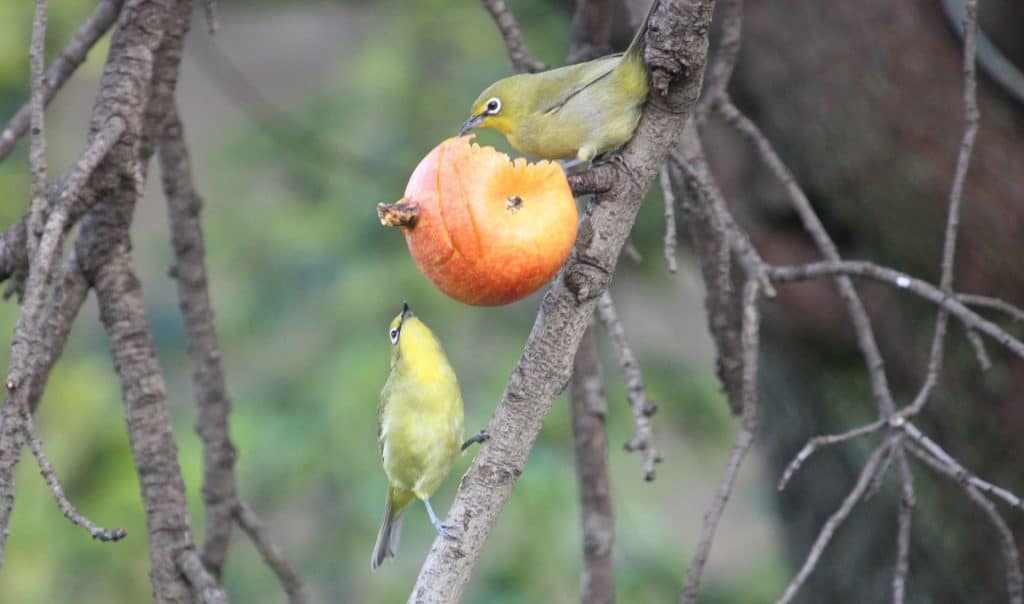 Most of the time, birds aren’t a big problem in the garden until you have ripe fruit that they like. The key is keeping what you want to eat covered. This means throwing bird netting or, better yet, lightweight floating row covers over your strawberries before they are ripe.

You need to do the same thing with trees or fruiting shrubs. Cover them if you want a decent harvest.

It’s not feasible for the small farmer or kitchen gardener to throw netting over an entire patch of corn, particularly if it’s larger than a 4-by-4-foot square. You have to get creative. Growing up in Ohio, we had propane cannons situated in the fields. Even though the corn was so tall you couldn’t see much, it didn’t take long to recognize the click of the timer, so we would run like crazy to get out of the area. The birds flew away momentarily, but they soon became accustomed to the noise.

There are also visual deterrents on the market that utilize shiny, iridescent materials shaped like owls that reflect the sunlight to keep them out of the area. Some people hang old CDs for the same effect, although with both, you want to move them on a regular basis to keep the birds from realizing they cause no harm. Foil ribbon will also deter them for a time.

Critter control is serious business, and you need to do a lot of learning in order to protect your garden. Every year comes with a new challenge, and just when you thought you figured out how to get rid of a certain pest, you have to rethink and reinvent your methods the next year. Hopefully, the tips listed in this article will help you improve your weapon arsenal for critter control, and you will be one battle closer to winning the war.