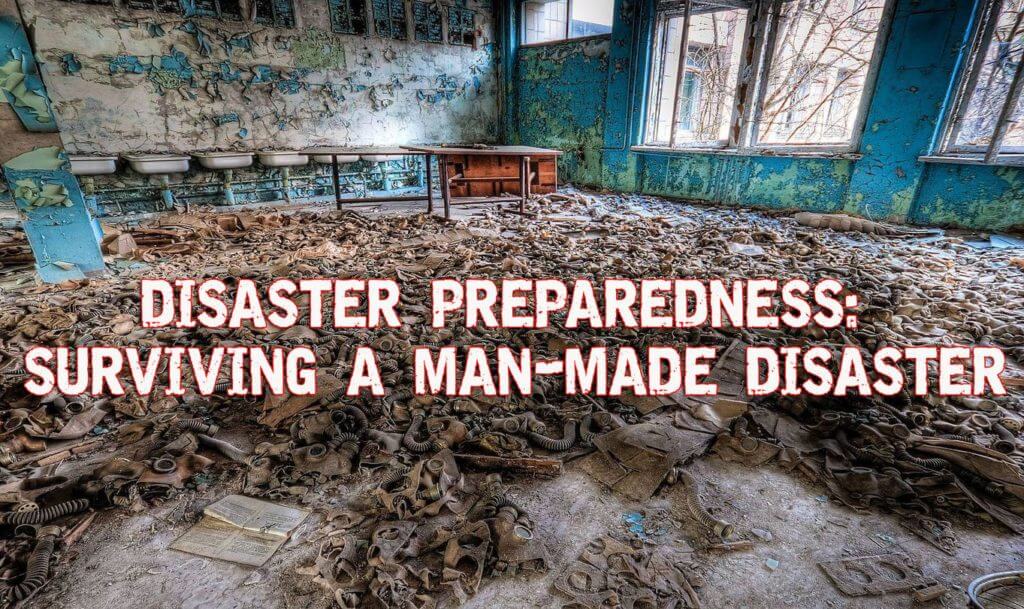 According to Eastern Kentucky University, disasters are unfortunate events that almost always end with individuals losing their lives. Perhaps the biggest difference between a natural disaster and a man-made is the human intent to cause environmental damage. A man-made disaster can generally be divided into different categories like terrorism, transportation hazards, environmental accidents, and technological hazards.

Terrorism, for example, can be defined as an act of violence towards human life, with the intent of making a social or political point. This disaster can affect all communities all around the world. Throughout the years, terrorist both domestic and foreign have demonstrated the willingness to attack at any given time.

None of this is easy to cope with, but there are ways you can get through it with careful preparation. Disasters happen every day in the world, which is pretty scary when you think about it, and the most important thing to ask yourself is whether or not you’re ready. If not, find out below what you need to do in order to prepare yourself before it’s too late. Being prepared now could make the difference between life and death.

Preparing for the Worse

For starters, whenever a disaster strikes near you the plan should be simple. To get to safety with as little inconvenience as possible. In other words, treat the moment as if you’re planning on leaving your home for an extended vacation. For the short-term effects focus on preserving foods, and packing a safety kit. Let’s use a toxic chemical attack as an example, and you need to evacuate your home immediately to avoid being exposed to poisonous chemicals.

Biological and chemical weapons may be the most devastating and uncontrollable weapons known to man. During World War I, for example, the French and Germans began to manufacture bio-chemical weapons, which killed thousands of military officials. This caused the two power ranking countries to come to an agreement and stop manufacturing the deadly poison.

Nevertheless, countries like China, Syria, Sudan, and North Korea are still manufacturing the bio-chemical weapons and are all suspected of having stockpiles of it ready to go at their convenience.

Meaning that there will always be a possibility of one of these stocks getting into the hands of terrorists, should a corrupt government official decide to take a bribe from the opposing side. In today’s world, this also means that these stocks could find their way on the black market and once there, these deadly chemical weapons can become a free for all and be difficult to track down.

So, how can you survive a biological attack?

Find the Root of the Problem:

First and foremost, you need to understand how a chemical attack could find its way near you. In other words, find out if it’s airborne, being transported from place-to-place, or being spread by animals (like cows, pigs, or chickens). Terrorists are smart, and often times find clever ways to sneak bio-chemical products into countries.

They’ll use shampoo bottles, electronic items, and even baby food – if they have to. As a matter of fact, Osama Bin Laden even made an attempt to poison citizens by spiking cocaine and trying to sell it to Americans back in 2005 according to the New York Post. That’s why being able to find the root of the source is vital to you and your family’s well-being.

If you aren’t sure where the toxin is coming from, then limit how often you go outside, purchase food you know is safe, and be sure not to drink any water from the faucet. That way, if a terrorist organization does attack the country’s water supply, the amount of damage done will be reduced. Also, consider having your water tested even if you have access to a Consumer Confidence Report.

An alternative method: Try drinking bottled water that’s been sitting around prior to an outbreak. Although going to the store and buying more bottled water sounds like a good idea, you’re essentially taking a gamble during a time of bio-chemical attacks.

Get Rid of Your Clothes:

Generally speaking, most chemicals will cling to your clothes without any problems at all. But removing whatever hazardous clothing items you have will help reduce your chance of coming in contact with the deadly poison. If the outbreak is really bad, don’t even bother touching your clothes. Instead, cut them off with scissors. That way you’ll be able to avoid further contact with your hands and/or face by pulling your shirt over your head.

Once you’ve successfully completed this process, be sure to wash your skin with soap and water. If your eyes start to burn, the CDC recommends rinsing them for about 10-15 minutes.

In short, respirators work to help remove contaminated particles and debris from the air. The way it does this is by guiding harmful debris found in the air through a filtration system using a curved surface. The filter itself uses different materials like wax, plastic, resins, and latex to purposely attract and trap contaminated particles found outside and inside the home.

In order for this to be done successfully, however, the movement in the air through the filter usually requires negative pressure. This method is similar to an individual inhaling air. When we inhale, for instance, we breathe in particles that are filtered throughout the body. But when we exhale, our body pushes out carbon dioxide, which would then be caught and trapped by the respirator.

Related article: Top 50 Things To Disappear From Stores Before A Natural Disaster

When it comes to finding the right respirator, it can be tricky. Each one works differently and has its own strengths and weaknesses. So which type is the best choice for you during an attack? Chances are, it’s the N-class – the most common type. They generally cost more but work better than any other when it comes to filtering out chemical weapons.

Stay Calm & Have a Plan:

“Prepping is one of the most mainstream activities that people are often engaged in.” So instead of running around panicking and stressing out, have a plan. Besides, running around will only make things worse for you and your family. Remain calm and make sure you’re stocked up on emergency food and water – both at home and at work. You never know when a man-made disaster will strike near you, and it’s always better to be too prepared than not prepared enough.

So don’t risk shopping for food and water after an emergency has already been declared. That’s why having survival plans well in advance can help. After a few months, check the expiration date on your food and be sure to change out whatever’s expired.

Moving forward, keep it simple when preparing. In other words, make do only with the necessary items and avoid carrying around the extra weight. Find out what disasters can happen near you – like explosions, biological attacks, and public shootings –  and take the proper steps needed to prepare for them.

If that doesn’t help, try contacting the authorities near you to find out how you and your family can be ready. They’ll not only be able to provide you with a plan, they’ll also be able to tell you the last time a man-made disaster occurred in or near your community. You can also find out how to identify suspicious behavior and help prevent a disaster before it unfolds.

Do you feel prepared?

If so, try practicing some of the safety tips listed above. As noted before, a man-made disaster, unlike a natural disaster, can happen at any time. The weather doesn’t play a factor. So, make sure you know all the safety protocols and remember to educate your family members as well in this case.

Thanks for the read! Did I miss anything important? What are some other strategies preppers should know about when it comes to surviving a man-made disaster? Feel free to leave a comment below.

This article was written by Herman Davis for Prepper’s Will. H.Davis enjoys exploring the outdoors. If you can’t find him online, you might be able to catch him at the gym or watching sports (Go, Broncos!). Follow him on Twitter at @Davis241. Thanks!