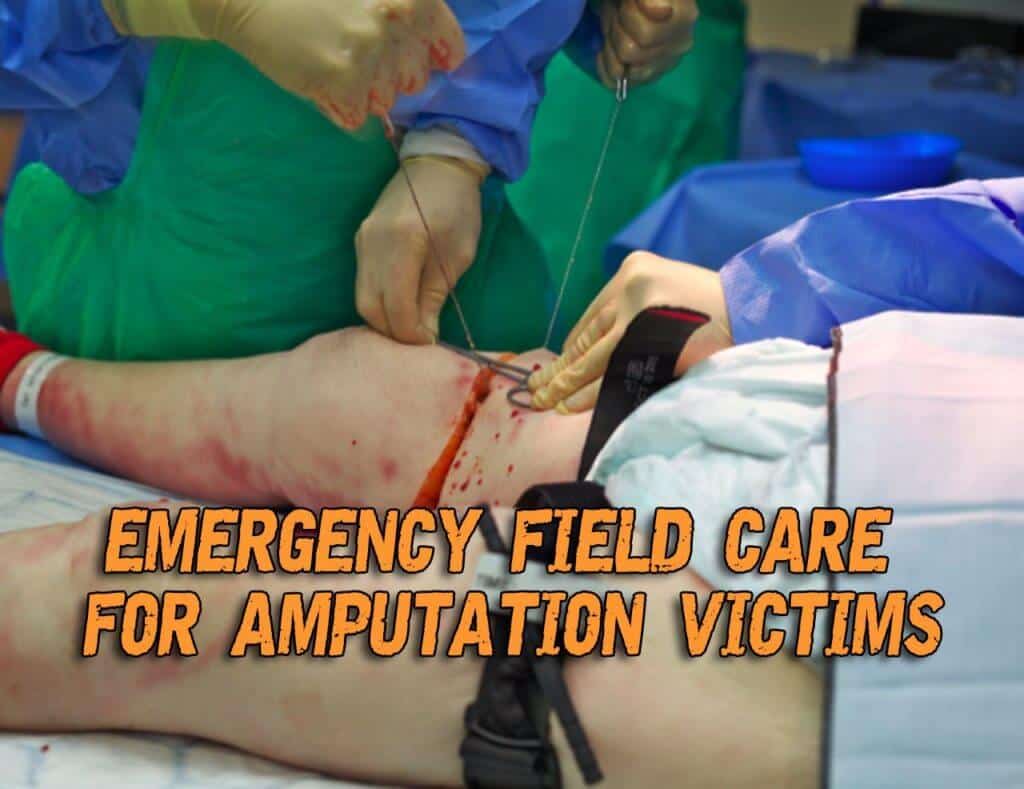 Proper pre-hospital care for an amputation victim saves the life of the patient and provides the best chance of reattachment of the lost limb. However, you must know what you are doing before lending a helping hand. Otherwise, you could cause more harm than good.

You are visiting relatives in a rural area of another state. You hear shouts for help originating in an adjacent field. As you near the source of the shouts, a worker runs over and says he’s going for an ambulance, “old Jake” got his hand caught in the belt. After traveling a few yards further you find a middle-aged male with his right arm wedged between the belt and drive roller of a conveyor system.

About half of the lower arm, from the elbow down, is intact. From there, muscle protrudes around a jagged bone end. The crushed hand, with flaps of skin hanging where the wrist and lower arm used to be, is lying on the ground where it was thrown by the belt.

You attempt to reassure the farmer while applying digital (finger) pressure to a proximal arterial pressure point (between the wound and the heart). A short time later, the local “rescue squad” arrives. After assessing the patient, they apply a tourniquet to the stump. You refrain from pointing out that digital pressure was working effectively. As they load the patient into the ambulance, you ask what they are going to do with the hand. One of the attendants says, “Nothing, you want it?” amid laughs from the rest of the crew, the doors are shut, and the ambulance speeds off through the field, its siren wailing.

What should have been done?

As we all know, before anesthesia and aseptic techniques were developed, a victim of traumatic amputation would probably die. If he did not bleed to death infection would claim him eventually. As refinements were made in surgical techniques amputees had a better chance of living, albeit without a limb, at worst, or with a crude prosthetic appliance, at best. Most work at this time was directed toward developing more functional and more lifelike prosthetics.

In the past 40 years, replantation surgery has progressed to the point where success is measured not by whether or not the limb survives, but rather by how much of the limb’s pre-amputation function returns.

Obviously, not every traumatic amputation victim is a candidate for reattachment surgery. As time goes on, the option will be available to more and more patients, as long as they and the amputated pan have received proper pre-hospital care, care aimed at providing the surgeon with the best possible candidate for such surgery.

Types and Differences of Amputation

Basically, there are three types of amputations.

Complete or total amputation occurs when a limb or protrudance is completely severed from the body. Partial amputation describes those injuries where a limb or protrudance is more than  50 percent severed but remains attached to the proximal portion by a relatively small amount of soft tissue. Third, there are “degloving” injuries (complete avulsion). These are basically injuries in which the skin and adipose (fatty) tissue are removed from a region, leaving the underlying tissue essentially intact.

While some may disagree with this being considered a type of amputation, treatment of the recovered skin is identical to that of an amputated limb and is included for that reason. In most cases, a degloving injury alone will involve minimal blood loss. Peripheral vasoconstriction (closing of the blood vessels) will speed hemostasis (cessation of bleeding).

When a limb is completely severed several things occur which act to reduce blood loss. After the loss of about one liter of blood, affected arteries begin to spasm, partially occluding the vessel. The veinous and lymphatic vessels contain valves which prevent backflow of their respective fluids.

The elasticity of the vessels tend to draw them back into the surrounding tissue of the proximal aspect of the limb. The pressure exerted on these vessels by the surrounding tissue tends to force them closed. This effect, coupled with the veinous and lymphatic valves and the arterial spasms, tends to greatly reduce blood and fluid loss from a complete amputation.

In a partial amputation the vessels, unless completely severed, will not be able to withdraw into the proximal aspect of the limb. It’s obvious that should an artery be lacerated but not severed, the risk of exsanguination (bleeding to death) is much greater than with the other two types of amputations.

No clamps (Kellys, hemostats, etc.) of any type should ever be used on a blood vessel. Clamps are great for shutting off an intravenous (IV) line to administer medication, or for similar uses, but they are emphatically contraindicated for use on blood vessels in the field.

When the patient arrives in surgery, the width of the clamp must be removed from the vessel before anastomosis (end-to-end attachment of transected vessels) can proceed. By using a clamp, you have provided the surgeon with an even shorter vessel to work with, needlessly.

As with any extremity wound, elevation and direct pressure should first be tried. This should be applied with a sterile surgical sponge or compress moistened with sterile isotonic saline solution. A bandage should then be applied to hold the dressing in place, and an elastic bandage (“Ace Wrap”) applied on top of this. The elastic bandage should be tight enough to constrict the vessels sufficiently to slow the bleeding.

Pneumatic appliances such as MAST (Military Anti Shock Trousers), air splints or even an extra sphygmomanometer (blood pressure cuff) can be used to provide the necessary constriction. If this proves ineffective, digital pressure should be applied to an arterial pressure point proximal to the wound. As a very last resort, a tourniquet can be applied. A wide band is practical and it should be used. Be certain to mark the time of application somewhere obvious on the patient, on the limb beside the tourniquet, or on the patient’s forehead with ink or an indelible marker. The tourniquet should only be loosened or removed by a physician, preferably within an hour after it was applied.

When treating a degloving injury, a saline dressing should be used to cover the area and held in place with an appropriate bandage. Ice should never be applied to the proximal portion of the injured limb. The questionable benefits are far outweighed by the potential damage to the tissue from this practice.

In the case of a partial amputation, the same basic procedure should be followed, with the exception, of course, that the bags should not be tied tightly, but rather closed around the intact tissue “bridge.”

When dealing with a degloving injury, the surface of the skin normally in contact with underlying tissue should be covered with saline-moistened sponges and the “outer” surface covered with dry dressings. It should then be transported like any other amputated body part.

The departure from the previously recommended procedure of covering the entire limb with moistened dressings is designed to alleviate the maceration caused by prolonged contact with moisture. Maceration is the destructive softening of the skin by exposure to water. This effect occurs when you soak in the bathtub. The skin on your fingers becomes wrinkled and easily torn. This revision not only makes the surgeon’s job a little easier, but it may mean the difference to the patient of having a functional limb or a stump.

It is important that the amputated part be recovered and treated as outlined above —no matter what its condition. Even if it is damaged beyond the point of replantation, it can still supply skin for grafting onto the stump. The amputated part should have a label affixed to the outside bag, indicating the patient’s name, body part enclosed, and the time of amputation.

Avoid getting preoccupied with the search for the amputated part. You are still dealing with a trauma patient and still fighting time. Even though the patient appears stable, he must still receive definitive treatment within that “golden hour.”

The catchphrase here is “life before limb.” It is of little value to save the limb but lose the patient. A suggestion to deal with the problem of the hard-to-find limb is to print the packaging requirements on a 3 x 5 card. If the difficulty is encountered in retrieving the limb, the card, a bottle of saline, sponges and bandage material can be left with another rescuer or even a family member and the limb transported separately from the patient. While not ideal, this is still a functional alternative.

The importance of time should be stressed to those personnel conducting the search. Once at the hospital the patient must be prepared for surgery. Once in surgery, the bone ends are aligned, then anastomosis of the arteries, then veins, is performed. This all takes time. To maintain the viability of the limb for replantation, cold ischemic (interference with blood flow in tissue) time cannot exceed six hours. This means six hours from amputation to revascularization if the amputated part is treated as outlined above. Again, time is of the essence.

In the recent past, a replantation was considered successful if the patient did not ultimately lose the limb. Today success is measured by the ultimate return of the function to the limb after replantation.

Find Out What’s the Closest Nuclear Bunker to Your HomeA