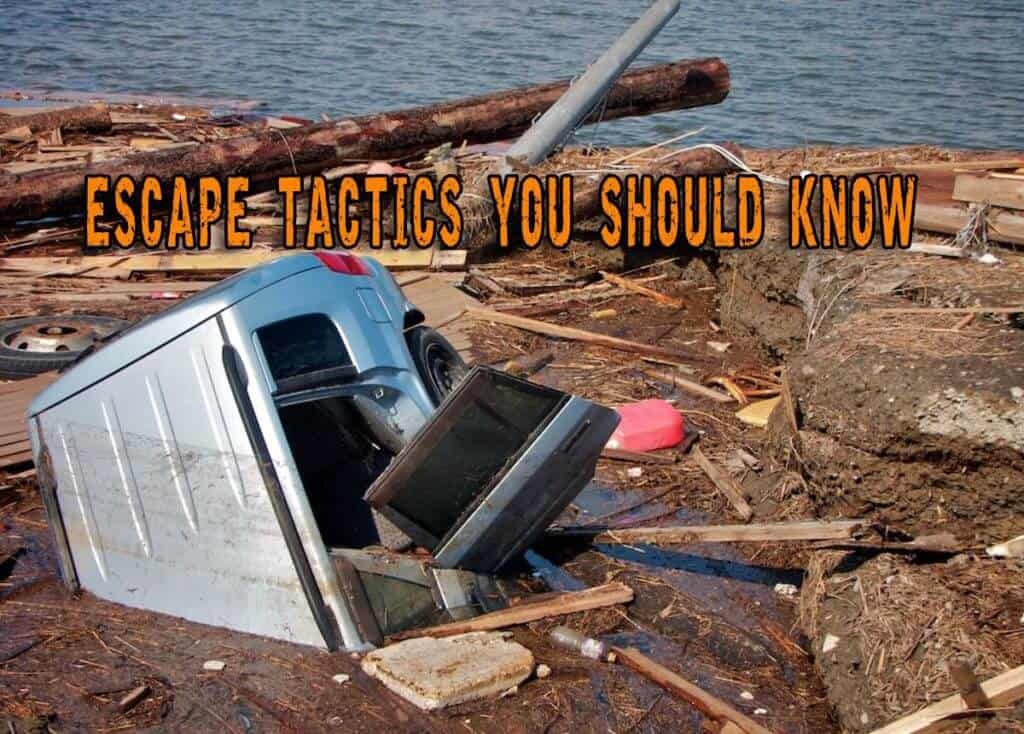 It is never too awful hard to find oneself in quite the sticky situation, especially after the big S has hit the metaphorical fan! In the paragraphs to come, we will discuss four different could-be everyday instances where escape is the only option for survival. Any number of things could cause the vehicle you are using for transportation to veer off the graciousness of dry, hard land and into a seemingly abyss of water. In fact, after a bit of research, you (much like I was) will be completely astonished at how often this sort of event actually occurs. And to be honest, it doesn’t even take a very large body of water to cause you to drown in your vehicle.

In many cases, the victims of a sinking car were plummeted into small farm ponds, no deeper than ten to twelve feet.

The absolute, number one thing to NOT do in the beginning and throughout the scenario is to panic. Most of the many deaths in America that occur during the sinking of a car are brought on as a result of panic. Losing the ability to think straight can only bring on more panic and not to mention waste what energy you may have had in the first place.

Having a plan and understanding what exactly is happening to the car under the water is critical to your survival. By adopting a brace position to survive the impact, acting decisively when the car ends up in the water, and getting out fast, being trapped in a sinking vehicle is survivable, even if it’s a flooded river or a choppy bay.

You are trying to live, shtf and you have found yourself out in the middle of Timbuktu…You find a muddy, mostly dried pond and decide to do some food hunting. As you scour the area, thinking soley about how hungry you are, you suddenly step off into some thick, mucky brown stuff. You quickly realize that this isn’t the typical mud hole you and piggies played in back at home…

Obviously Hollywood loves to embellish things, and quicksand does not escape that declaration. However, quicksand is not nearly as dangerous and deadly as it is so often made out to be.

While it doesn’t necessarily suck you under and into a murky tunnel of death and doom, it can be extremely dangerous, especially if you decide to go on a manic panic spree while marooned in its thick, cement-like mixture. In fact, it really isn’t even that difficult to escape from; if, of course, you don’t find yourself in a panic.

Contra to mainstream movies and television, it is very rare for a quicksand fatality to occur from being “sucked under”. Deaths actually take place from exposure or drowning in the incoming tides.

In point of fact, it is not that rare an occasion that one finds themselves faced with the hindrance of a downed power line. This can come from any number of things, the top of the list being car accidents and natural disasters. That’s right my prepared friends, not all survival situations originate from grid failures and the economy collapses.

High voltage power lines (which, by the way, seem to litter every street, highway, suburb, urban road, sidewalk and yard with their gaudy presence) carry high power from the plants that produce and transformers that produce them to their customers (us). As difficult as they seem when they go up and when we focus on their absurd pathways and configurations, they can come crashing down at a fraction of the time.

If you ever do happen to be in a vehicle when the lines come unattached, you are much safer if you simply remain in the grounded car than being afoot. If the wire happens to fall directly onto your car, don’t touch anything and remain that way until help arrives.

Riptide, rip current, both mean the exact same thing in our English vernacular (that is, unless you are a “professional”, then you’d probably prefer the term rip current). This is because a riptide actually has nothing to do with the tides themselves.

With the summer months commencing as fast as time goes, this is a topic of mighty importance!

Rip currents occur when water rushes through a low point in a sandbar. Since waves keep propelling more water into the depression between the sandbar and the beach, the rip current may continue for several minutes, or even several hours.

Related reading: How To Survive the Rising Waters of a Flood

The strongest part of the rip current, in most cases, is the direct line between the water’s edge and the sandbar opening. The current will also pull in water from either side of the depression, causing you to feel pulled parallel to the beach before being sucked outward to sea.

When all is said and done…

It is a known fact for us preppers that we must do all that we can do to be ready for any sort of disaster, and that includes the ones that we keep in the back of our thoughts or don’t think of at all.

In this crazy world, it is of great weight to be ready for any and all things possible!

Stay safe out there preppers, and stay intellectually equipped!