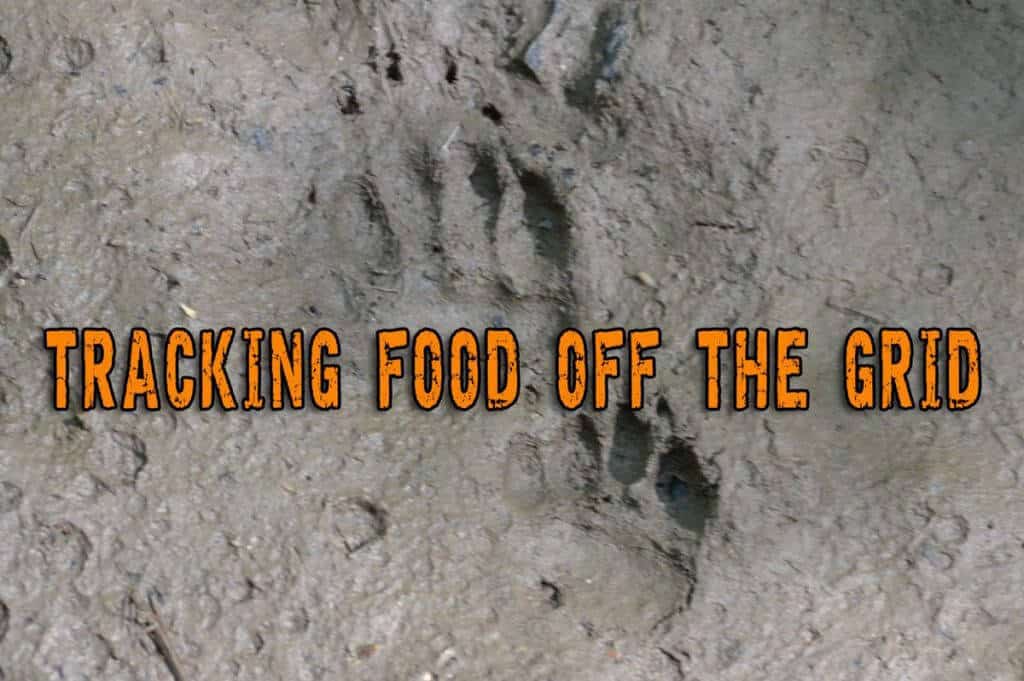 When you find yourself in a survival situation or off-grid scenario, there is one very important factor to keep in mind (notably so, if you are as carnivorous as I am). I write this article about tracking as I travel, by bus, across the country, and am starving for some good red meat, but no stops are in sight.

Food, aside from a few other factors, such as finding water, is the next most important accomplishment if you are to endure long-term survival conditions. Now, that is not to say that it is the most important since you can survive up to a phenomenal three weeks without it. Water is definitely the most paramount discovery you will need to come across.

At times, you may find the urgent need to track a human, perhaps one who has gone missing from your group or as a member of a search and rescue party, but how about when you need to track down food to prevent starvation?

While it is true that one could simply live off the vegetation that is local to the region they are in, tracking wild game is not a bad know-how to have in your prepper repertoire.

Tracking wild animals for food is one of the oldest, most sacred of activities. It is an artform in itself and is well worth the time to master. Animal tracking is an art to be treasured and respected.

The most essential key to tracking a wild animal for survival reasons is respect. The general basis is simple: When you “sneak” up on an animal many occurrences can take place. Some of these may be: spooking the animal causing it to abandon its young, damage of their foraging grounds, and disturbing their nesting grounds. You must remember to respect nature at all times. One must use their utmost common sense in a survival-type scenario.

That being stated, let’s dive into some great tracking techniques!

Your first goal is to scope out the area that you will be hunting. If you are already familiar with the lay of the land, you will find it a bit easier to know what animals you can track for food. Be sure to take careful notice of the animals in the area you will be hunting. This inspection should include an examination of regular lairs, underbrush and any other signs that may assist you in capturing your prey quicker.

Pay close attention to the water sources that surround you. The water must be clean and not stagnant. Uncontaminated water sources can lead you to any number of animal tracks.

Look around for green pastures or luscious meadows, berry or nut bushes, or new leaf growth. These can all be signs of a feeding area for the animal you are hunting.

For example, if you are hunting in a mountainous area and are traveling over rocks and stones, you will want to look to leaf agitations, broken twigs/branches, bite/scratch marks, feces and odors. A sign is simply anything other than a literal track that suggests an animal has been through that location. Discarded food, droppings, scores on the barks of trees, or even fur left behind in thorns or branches can be considered signs.

A large-scale sign is a sign that is made in and of the environment itself. Understand that this means to have the ability to read the surrounding landscape to locate animals. This category will include paths of travel (trails, runs, pushdowns). Other forms of large-scale signs would be an animals bedding area and feeding area.

These are the specific signs of animal presence, most commonly found on paths and runs. Medium scales can be described as any sorts of rubs, gnaws, chews, scratchings, upper- and lower-vegetation breakage, ground debris, feathers, and scat.

These are the signs that are most difficult to spot and distinguish. Small-scale signs can include compressions and dust or grit left on the face of something. These will be most easily seen by using a very specific technique known as “side heading”.

Ghost scale signs are the trickiest to get down, as they can be considered the “Houdini’s” of tracking. A true ghost scale will not last very long, and will seemingly disappear as the hours progress.

In the wee morning hours, when a nice dew is settled on the blades of grass, if an animal crosses it, it will wipe away the dew leaving a duller color than the surrounding “wet” grass.

Leaf depressions are another form of a ghost scale. This happens when an animal walks over leaves making a compression beneath the leaves in the soil. The leaves will spring back up, but not entirely, a depression remains. It is most easy to see this using the “side heading” technique.

A track, in good and clear form (a true track), will give you much-needed information. First and foremost, it will help you to identify what animal it is you are tracking.

Track identification is one thing that you should focus on studying before you ever begin formal tracking. Animal scat and urine habits are yet other things to study prior (if possible) to ever beginning physical tracking. However, in the field, you can still practice, and only improve your skill by learning the tracks themselves and their respective signs.

A true tack is simply the track that depicts the real shape of the animal’s paw. With every step, an animal takes its toes land lightly on the ground first, ensued by the heel pressing into the earth. Next, the toes will roll forward slightly before the track is pressed into the soil and its foot is lifted. This whole process slightly warps the true track. However, it does give you the information needed for the animals direction of travel (and this is one of the most important signs). Which leads us to:

Obviously, the line of travel falls into this category, giving you the idea of which direction the prey is heading. The stride is then measured from the heel of the right foot to the heel of the left foot. The number of toes on the animal’s track can be very telling about what it is, as different animals have different numbers of toes. The size of the front and back paws are worth examining as well. Look to see if the paws have left a nail print in the earth. This will also be a great indicator of what sort of animal has left those particular tracks.

Examination of the track pattern:

The next step in efficient tracking will be to thoroughly examine the precise pattern of the tracks. This means to check out where the footprints fall, how they are stacked, and how it is treading. The appropriate term for what you will be gaging is called gait. The track pattern reveals the animal’s gait.

A diagonal walker will leave a set of tracks that are staggered. They lift their front and back legs on opposite sides at the same time. This family of animals will include hoofed beasts, canines and felines.

Wider-bodied animals will lift the front and back legs of the same side at the same time. This includes bears, raccoons, and opossums.

If a track reveals that the animal has the front feet landing alongside one another, and the back feet very close behind, you are dealing with a bounding creature. Weasels and ferrets are best known for this “bounding pattern”.

Opposite of the “bounding pattern” is the galloping pattern. This means that the front feet land first and the two back land in front and to the side of the position where the two front landed. This is how rabbits and hairs make their way.

Check the Age of the Tracks:

How old the track is will determine how recent the animal passed that place. It is not with extreme ease that you can determine the time the track was put down, but with some diligence, you will be able to tell if the track was from the same day, a few days old, or even months old. Many factors can give clues to the age of the track; weather, fluctuations in weather, and the type of soil or terrain.

The best method for learning how to do this is by artificial print testing. Simply find a plot of ground, and impress into the earth a fake track.

First, clear the vegetation and rocks, and classify the soil. Is it sandy, silty, or red clay? Following that, stamp a fake paw print into the soil. The next part is the easiest (though sometimes the hardest); simply let time do its thing. Over a small course of time, continually observe the print and note its changes. It is important to do this in several different “terrain” types to help you get a better idea of how to register the age of a track.

It is not entirely necessary to follow/find every single track of the animal. You can, after a bit of time, sort of predict where the animal is going, or at least its general direction. Basically, think like the animal and visualize its movements. Anticipation can become a key tool in tracking in some terrains where the tracks are not marked everywhere the animal’s feet fell. You want to try to understand as much as you can about the animals objectives so that you can easily portend its moves.

Track in the early morning or early evening. Animal tracks appear more visible during these times of the day. It also helps that animals are far more active in these times.

Stealth, while tracking, is going to be your superior stratagem. For obvious reasons, while stalking a prey, you do not want to alert it of your presence. Elude from stepping on crisp, crunchy leaves, twigs and sticks and take heed when moving through dry grass. If possible, try to stay downwind from the animal you are stalking; animals can detect smells much better than humans.

Always be careful to preserve the tracks you observed before moving forward; if the trail is lost, you can typically go back to the last clear point, and then restart from there.

Practice your tracking in vast, large expanses of land.

Whether it is a picture taken, a sketch of or a plaster cast of the track, keeping a recording of the track and some notes on size, direction of travel, age and track pattern will help you to not only understand tracking better but also help you with later experiences.

Tracking with more experienced people will also help you to understand the process far better; utilize on their knowledge and be sure to take notes.

Understanding how to track animals is not only useful for hunting but for all-around living in the outdoors or off the grid. Tracking can help to identify the wildlife that surrounds your plot of land. It can help you to know what is around, what is good for food, and what sort of predator-like animals are around you.

A compact, paperback field guide can be your best friend when you are fresh to tracking and are simply attempting to learn the traits.

his article has been written by Jonathan Blaylock for Prepper’s Will.