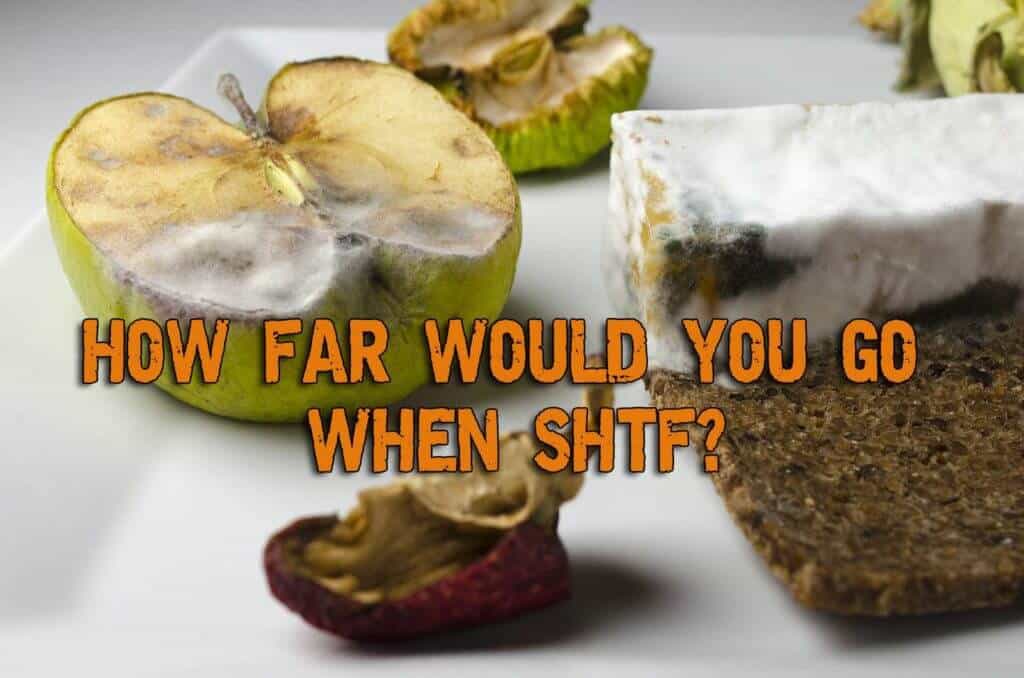 Two weeks ago, I was at a party with some of my closest friends and their families. Some of them are into the prepping lifestyle while others see it as an unusual past time. After various topics we debated over drinks, I thought it would be fun to ask them how far would they be willing to go when SHTF. This imagination exercise is a good ice-breaker and I advise you to try it with your friends.

Talking about how the world would end and what people would do when SHTF is a fun thing to do on a Saturday night. It might not be for everyone, but for me, it’s a good way to teach my friends another thing or two about prepping. We were all friends there and I decided to challenge them and see their reaction.

As you can imagine, people will react differently when SHTF. Since many topics can affect each and every one of them, there’s always “the one” people can’t do without. It’s one of the most basic human needs, food.

No matter what you say, food will become a problem when SHTF. Not everyone will have a fully stocked pantry and for common folks, it will become a major issue.

So, after starting a discussion regarding prepping that turned out into a political topic, I decided to spice things up. I took a piece of paper and wrote down 10 possible foods that one could eat when SHTF. While some of these are common items, others are more on the extreme side of things. After all, in a survival situation, when you lack normal foodstuff, you will be forced to improvise. Obtaining food may be almost impossible for some when SHTF.

That being said, here is the list with my 10 foods “of choice” when SHTF. You will notice that the closer you get to the end of the list the more off-putting the food items get.

Would you eat these foods when SHTF?

Some of you may say that only a few of these foods are off-putting.

While there are a lot worse things out there to eat, this list keeps things more down to earth. It is intended to see who would go the distance and what is their approach.

At the party, there were around 30 people, and almost all of them decided to play except for two women. They didn’t want to even joke about such scenario and were firmly convinced they will never found themselves in that situation. Anyway, here is what the rest of the people answered.

To my surprise, almost all people said they would have no problem eating canned food destined for their pets (cats, dogs). Two people said that they would first try small quantities to make sure they aren’t allergic to some of the ingredients.

Most of them agreed that they would cook the food first, just to be completely on the safe side of things. I wasn’t surprised by their response since quality canned food has a good meat content and it will go down alright.

In fact, this is a good survival food when SHTF and if you know what you’re buying, there shouldn’t be any problem eating such food.

I was also surprised when all people said they would eat expired meat if it was refrigerated properly. Some said they did it before while others said they have some in their fridge. Eating expired meat didn’t seem to bother anyone, and they were all willing to do it. They all agreed that the meat should be cooked properly to avoid any risks.

Expired meat that was refrigerated properly isn’t a high health risk. However, this depends on the expiration date, if the food package was opened and if the meat got in contact with other foods or unsanitary tools/people.

3. Food found on the ground

Here things got a little more interesting, and people were asking all sorts of questions. What type of food? How long it stayed outside on the ground? What type of weather are we talking about? Is it a starving situation or they can pass this one? All sort of questions popped, one after another.

While eating food you find on the ground may seem like a good idea, that’s not always the case. Their safety measures may seem like common sense, but you can never know if the food was contaminated and if it was safe to eat in the first place.

The majority of women said they find bugs of any kind revolting and they would rather starve than eat any kind of crawlers. The men, however, said they would not eat unknown bugs and they will do a quick online research to figure out if the bugs are edible. They all said that if the internet doesn’t work, they will sit this one out.

While some bugs are edible, others can make you very sick and you will only make things worse. For some bug eating tips, I advise you to read this article:

Edible Insects That Can Save Your Life

While eating lizards and snakes may seem easy on TV, it’s another thing in real life. Trying your hand at gutting, cleaning and cooking lizards or snakes requires experience and knowledge of living in the field. Things become much more complicated when you have only one shot at this. The chances of your backyard crawling with lots of lizards and snakes for you to feast on are very slim.

Bread covered in mold was a NO for the majority of people. They say that it’s a health hazard they are not willing to take. One drunk guy said he would try if he has no other choice, but I’m guessing it was the alcohol talking. However, they all asked me what I would do if presented with such “opportunity”.

I said that I would eat moldy bread, but only after scraping the mold carefully and cooking the bread over an open fire. It may not be completely safe, but it’s all I can do to mitigate the risk of getting ill. It won’t be my first choice, but if I would be starving and there wouldn’t be anything else around I would risk it.

Here the history repeated itself and the same people said the same thing as for the topic with lizard and snakes. What I have to add here is that rats and mice are disease carriers and they eat things that can make you very ill. You need to be able to gut the rat properly and clean it’s insides before cooking it. This will be the last resort in some cases, and I do not recommend trying it.

All people said that they could never eat their dogs and cats. They said it’s like eating a family member and they will never be able to forgive themselves. Once again, this can seem like an extreme solution when SHTF, but some people will choose their life over the one of their pets. It makes sense if you think about it and it’s the right judgment if you manage to overcome your fear and ignore your feelings.

I have a dog and two cats and I will never harm them, no matter what. I make sure that both us and our pets will be ready when SHTF. I have a prepping plan made especially for my pets and they will never be left behind.

This was a big No for everyone at the party, even the ladies that didn’t want to play said it’s disgusting. They told me I have a sick mind for thinking of such things and I just want to make everyone feel uncomfortable. I didn’t take it personally and I explained that is just a game to see how far people are willing to go when SHTF.

This was a big surprise for me and actually, 5 people said they would try it. Only two of them had one too many and I was able to understand where their “bravery” came from. However, the other three had to clarify some things, so that the rest of us wouldn’t call them monsters or maniacs. They said they would never be able to kill another human being it to eat him/her. The only way this is a plausible scenario for them would be if the people that would end up on their grill were already dead.

They do raise a few valid points and provided examples of survival stories where people managed to survive by eating the flesh of their friends that become casualties when the crisis started. You might not like the idea of eating another human being, but there are still cannibals out there even today. Some live in the jungle while others live in the concrete jungle and they aren’t discovered until people end up missing.

The morality of this “food choice” is debatable and it’s hard to say how people will act when SHTF. Some will stay away from their neighbors, but if things take a turn for the worse, they will not hesitate to sacrifice others for their own good.

Related article: The Reality of Foraging When There’s No Food

For me, this Saturday night game accomplished two things. First, it was an interesting way to pass the time with friends during an otherwise boring party. And second, it provided me with a good idea of how long the people I know would survive when SHTF. The vast majority wouldn’t last long when the food runs out. Except for four or five people, the rest will have a hard time dealing with hunger when SHTF.

Now the question remains: How Far could you go when SHTF?

I imagine the answers to this question would be quite different for your circle of friends. Try this game the next time you’re part of a large gathering, and I guarantee it would be quite fun and informative.

4 thoughts on “How Far Would You Go When SHTF?”