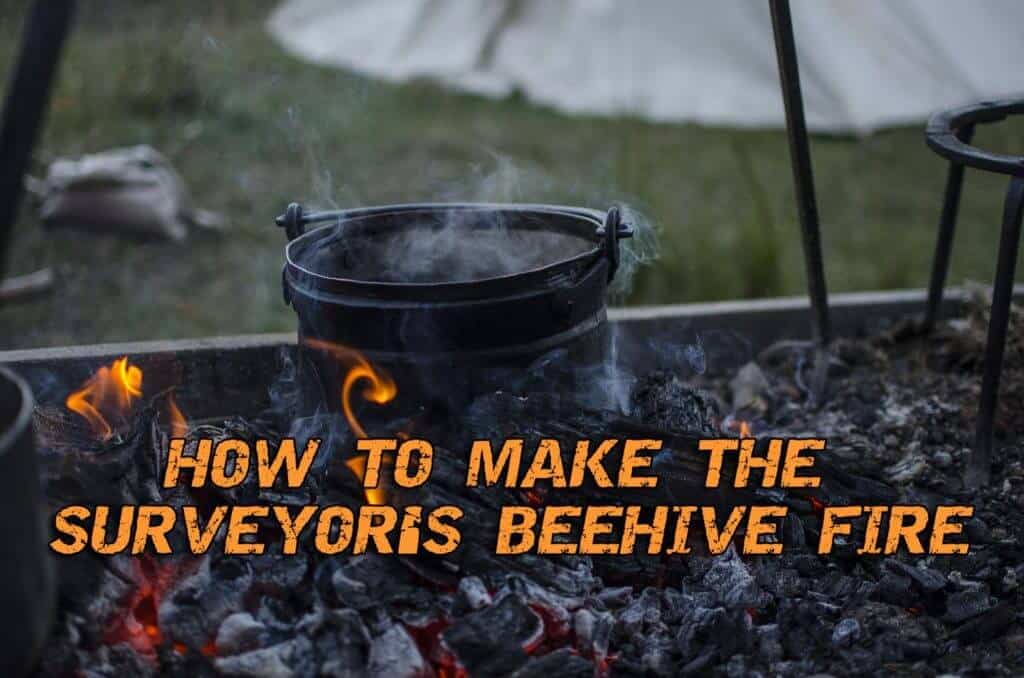 Building a fire in the wild is mandatory for survival, and it also a great morale booster. You should know how to build one, regardless if you are fleeing the collapsing civilization or if you are enjoying a camping trip. Today we will look into how one can make the surveyor’s beehive fire.

Here in the rain-soaked North-west, materials for by-the-survival-book fire building are hard to come by At the same time, the almost unlimited opportunities to venture into thousands of square miles of rugged out of doors in all kinds of rapidly changing weather make it almost certain that sooner or later your life might very well depend on your ability to build a fire.

If you are anywhere that Douglas Fir trees grow or grew, and that includes a large portion of the United States and Canada west of the Rockies, a little knowledge and a dry match are all you really need to soon by drying out and warming up in front of a roaring fire no matter what the weather.

The origin of the surveyor’s beehive fire

The surveyor’s beehive fire seems to have originated among the surveyors and timber cruisers that made their living traveling long distances and working on foot in all kinds of weather in the rugged rain forests between the Pacific Ocean and the Cascade Mountains in Washington and Oregon.

I had the luck to interact with many survey crews in this country, and at least one member of every crew knew this fire building secret. On the other hand, I have never met anyone else, logger, construction hand, big game hunter, cross country skier, or backpacker, that knew about the beehive fire unless they had an uncle, father, or grandfather who had worked on a survey crew.

The real secret is to learn to recognize burnable fuel when you are looking at it. Douglas Fir has a peculiar tendency to concentrate all of the natural oils and resins, distributed in life more or less uniformly throughout the trunk of the tree, into the very heart of the trunk near the roots after it dies.

Even very old stumps of trees that were cut in early day logging operations will sometimes do this. The result is a heartwood that has the appearance and feel of amber colored paraffin and smells when cutting or broken as if someone took the cap off a can of turpentine.

This is the king of pitch woods. Unfortunately, to the uninitiated, it is almost totally hidden under a pile of rotten, soggy wood that was the bark and outer layers of the tree when it was alive. Usually, the only clue will be a spike of wood protruding out of a moss and duff covered mound. In an undisturbed old-growth forest, there will also be other similar mounds and spikes that will turn out to be the remains of totally unburnable Hemlock or true-fir trees. However, it only requires a minimum of perseverance or experience to find a useable Doug Fir heartwood spike.

As soon as you break it off the smell and feel will leave no doubt, small enough pieces with your bare hands to obtain long slivers that will light and burn as easily and as hotly as a candle. These, in turn, can light the rest of the spike to be used as a torch or as fuel for a hot, but smoky, fire.

Related reading: Making A Proper Campfire In The Wild – 10 Campfire Designs To Build

If you have had any forethought at all about your outing though, you will have at least a pocket knife with you to cut shavings and split kindling, producing the same life-giving fire much more easily. The heartwood pitch by itself easily produces that most important item of foul weather survival — a fire. If there was one Doug Fir snag, there are almost certainly more in the immediate vicinity, and it will not be too hard to keep your fire going. However, the pitch wood is really too good a fuel. It is so full of resin it burns rapidly, hotly and with a lot of oily smoke, very much as an old automobile tire.

In an old growth Doug Fir forest, an old bum, or in second growth that was originally harvested 50 or more years ago, there is a plentiful supply of a more long-lasting fuel just waiting to be added to your pitch wood tinder. The bark of old growth Doug Fir is a thick cork-like substance that grows in huge plates and slabs, often 12 or more inches thick.

While the surface may be rain-soaked, the moisture on a standing tree, dead or alive, never penetrates more than a half inch from the surface. Again, the bottom line is that it is possible to get a grip in the fissures between the plates and literally rip chunks of bark from the tree with your bare hands. Once again, a little preparedness in the form of an axe, hatchet, or large knife makes the task a lot easier.

I have actually slabbed great chunks of bark from trees with a single blow of my axe that weighed more than I did. This bark, even with its rain-soaked surface is such a good fuel that the old-time logging camp black-smiths used it in place of coal or charcoal for their forge fires. And this, finally, is where the name beehive fire comes in. The weary surveyor or timber cruiser, as lunchtime neared, would collect some pitch wood almost incidentally to his working along through the woods.

Finding a reasonably flat and sheltered spot for his noon-day fire he would take his axe and start to make kindling and shavings of the pitch wood while his partner slabbed bark off a nearby Doug Fir. His partner would throw the pieces to within his reach as he was lighting the tinder. While he started to stack the pieces of bark in a circle and then on top of each other, his partner would be cutting a couple of forked Viney-Maple sticks. By the time the second man returned, flames would be shooting out between the chunks of bark stacked in the form of an old fashioned beehive.

Within 10 minutes of the time the pair stopped, they would be sipping coffee from their thermos and toasting their sandwiches on the forked sticks over the fire.

In the 30 years, I’ve spent in the Pacific Northwest woods, I’ve only seen the beehive fire method fail once. One nasty winter day we were working in nearly a foot of wet snow with more coming down all the time. We got in under a big Hemlock with limbs nearly to the ground. We had just got our fire going, and our coffee poured when the heat of the fire dislodged a full wash-tub of snow directly on the fire. I have never seen a fire put out more quickly or completely. It didn’t even leave any lingering smoke.

For those of you concerned about damage to the ecology. I don’t advocate slabbing bark from living trees except in an emergency or when deep in the woods away from most of the tourists. It does leave a tree rather unsightly, but completely unharmed as long as you don’t cut deeply enough to disturb living wood.

Learning how to build various fire types in the wilderness is critical since there are different campfire types that can serve various purposes. If you are familiar with our webpage and the work we are trying to do here, you must know by now that we are trying to teach people a thing or two about emergency preparedness, wilderness living and homesteading. The topic of building a campfire always comes back around, and people are interested and amazed by this subject. That being said, you can now add another campfire type to your fire making skills.