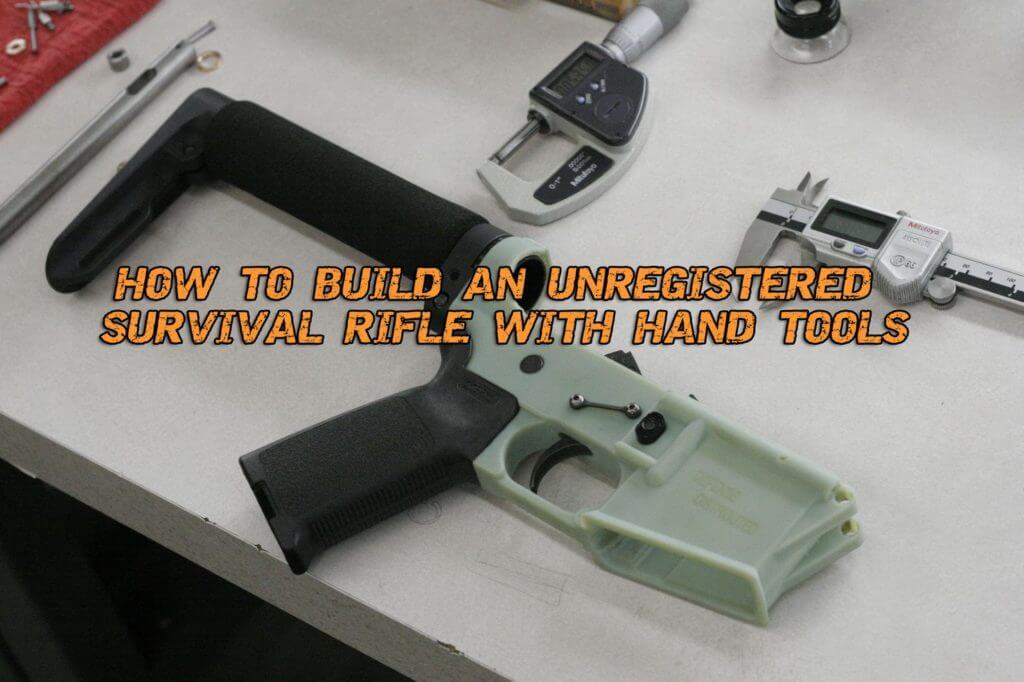 Every prepper knows that a good survival rifle is one of the most important tools in your prep kit. Most also know the government and guns don’t often get along. And chances are, you’ve seen the good ole’ AR-15 mentioned and tangled into just about every prepper gun topic on the internet.

That’s because many preppers choose the AR-15 as their primary survival rifle, and for a good reason: It’s relatively small, accurate, and lightweight. Ammo is cheap and plentiful, parts can be found for a dime a dozen, and it’s easy to build one with no experience. Unfortunately, the AR-15 also gets a bad rap in the media as an “assault rifle.”

Since the black rifle’s so popular (and since it’s been banned and lobbied against so often), companies have started offering tools and parts to build an AR-15 at home without anyone knowing. This is a quietly common practice that’s entirely legal. The ATF has long held that you can legally build a gun at home, no background check or FFL required, if it’s for personal use.

If you hadn’t guessed by now, this is a guide on how to build an unregistered AR-15 survival rifle, using a few hand tools and a little know-how. Before we break down how to build your survival rifle without registering or serializing it, let’s look at what parts you should use.

We want to caution that these are merely suggestions. The AR-15 is one of the most customizable rifle platforms in the world. You could build anything from a precision bench rifle to a high-speed pistol carbine if you wanted.

The parts we suggest will build a rifle that’s mil-spec and reliable, affordable and easy to work on, and compatible with any standard parts you might pick up or find later – including parts you might find on an issued or service rifle:

ARs can be chambered in 300 Blackout, 6.5 Creedmoor, .308 Winchester, 9mm, and much more. But 5.56 and .223 are perfect calibers for any survival rifle. Either round can take small and medium game, both are in use by police and the military, and they can be found in most gun stores and sporting goods stores.

A 16” barrel is the minimum legal length you need to install on your rifle. This length is also optimal for achieving proper velocity for 5.56/.223 cartridges. We recommend a stainless or chromoly steel barrel to get the longest lifespan and best rifling out of your barrel.

The gas system will control your AR-15’s recoil and cycling functions. A carbine-length gas system can reliably cycle any type of 5.56 or .223 cartridge, and it’s the most common gas system on most rifles.

A forged upper receiver is the strongest and recommended. Most receivers sport a hardcoat anodized finish, like what the military uses on its own service rifles.

The lower parts kit installs in the lower receiver and includes your hammer, trigger, safety, and inner workings. We recommend sticking with a standard AR-15 parts kit with a single-stage trigger. If the parts kit you buy is simply called an “AR-15 lower parts kit”, then you’re in the clear.

Building Your Rifle Off the Books

Now you know what parts you need to build a reliable, affordable survival rifle using the AR-15 platform. The core of this project centers on building the lower receiver, the firearm itself. You could buy a stripped lower receiver at your local gun store, but this will require you to submit to a background check. You’ll also need to pay extra fees and taxes, and there may be other restrictions depending on where you live.

For this guide, we’re taking an alternate route: We’re building our AR-15 using an 80% lower receiver. This allows our rifle to be built “off the books,” no paperwork, FFL, or background check required.

DISCLAIMER: Local and state laws vary. California requires your receiver to be registered and serialized, even if it’s built at home. Always check your state laws first.

An 80% lower receiver is a firearm blank that isn’t regulated by the ATF. It’s almost a firearm, but it isn’t considered one under federal law. You, the builder, get to buy one, have it shipped to directly to you, and then you’ll finish it at home.

The lower’s mostly finished for you. You’ll need to complete these four steps to make it an operational firearm:

Completing these steps will turn your receiver blank into a finished, stripped AR-15 lower receiver. You’ll now own a firearm by legal definition. You’ll then be able to complete your AR build using the rest of your parts.

How is this legal?

Like we said, the ATF is perfectly fine with this entire project. The ATF doesn’t regulate the terms “80% lower” and the like, but they do regulate receiver blanks. This is what they about the legality of receiver blanks:

“Receiver blanks that do not meet the definition of a ‘firearm’ are not subject to regulation under the GCA. The ATF has long held that items such as receiver blanks, ‘castings’ or ‘machined bodies’ in which the fire-control cavity area is completely solid and un-machined have not reached the ‘stage of manufacture’ which would result in the classification of a firearm per the GCA.”

And this is what the ATF says about building a gun without an FFL, background check, or license:

“No, a license is not required to make a firearm solely for personal use. However, a license is required to manufacture firearms for sale or distribution. The law prohibits a person from assembling a non–sporting semiautomatic rifle or shotgun from 10 or more imported parts, as well as firearms that cannot be detected by metal detectors or x-ray machines. In addition, the making of an NFA firearm requires a tax payment and advance approval by ATF.”

Our AR-15’s being built for personal use, and we’re buying our parts in the states. We’re not building a short-barreled rifle (an NFA item), and since we’re making a survival rifle, we obviously don’t plan on selling it any time soon. Pretty straightforward.

Machining the lower receiver takes around 2 hours or less with the right tools and equipment. If you’re using a drill press or router jig, then most of the work is already done for you. Most AR-15 jigs include pre-drilled and pre-cut templates as well.

These templates will sit on the top and sides of your receiver, showing you where to drill and cut. Most jigs also include the drill bits and end mill bits you need. Jigs also usually come with a “depth gauge” or depth-measuring card. This gauge will tell you how to set your bits, and how far you need to drill and cut to complete your receiver.

Receiver blanks can also be completed manually with a drill press and no jig. But if you’re this knowledgeable about amateur gunsmithing, then you probably don’t need this guide in the first place.

Once you finish drilling and cutting your receiver blank, you can install your lower parts kit, buffer assembly, upper receiver, barrel, gas system, and everything else!

The parts we suggested are all mostly contained within the upper receiver. It is relatively easy to put an upper receiver assembly together, but additional specialty tools will be required, like an Armorer’s Wrench. The parts we suggested above can all typically be found in any pre-built, “mil-spec” M4- or M16-style upper. Surprised we used the military’s own configuration for a survival rifle?

You’ll be the proud owner of a proper AR-15 that you put together yourself, from scratch. Your finished rifle will have never been put on paper, nor will it have a serial number or registering documentation.

Too long, didn’t read? Here’s a quick summary: A lot of preppers love the AR-15 because it makes a great survival rifle. It’s affordable, simple, reliable, compact, and it’s easy to build one at home. You can build an unregistered, un-serialized survival rifle using an AR-15’s 80% lower receiver and a few basic hand tools. This is legal to do in most states, and you don’t need any paperwork to do it. We recommend sticking with basic, mil-spec parts and chambering your AR in 5.56 or .223.