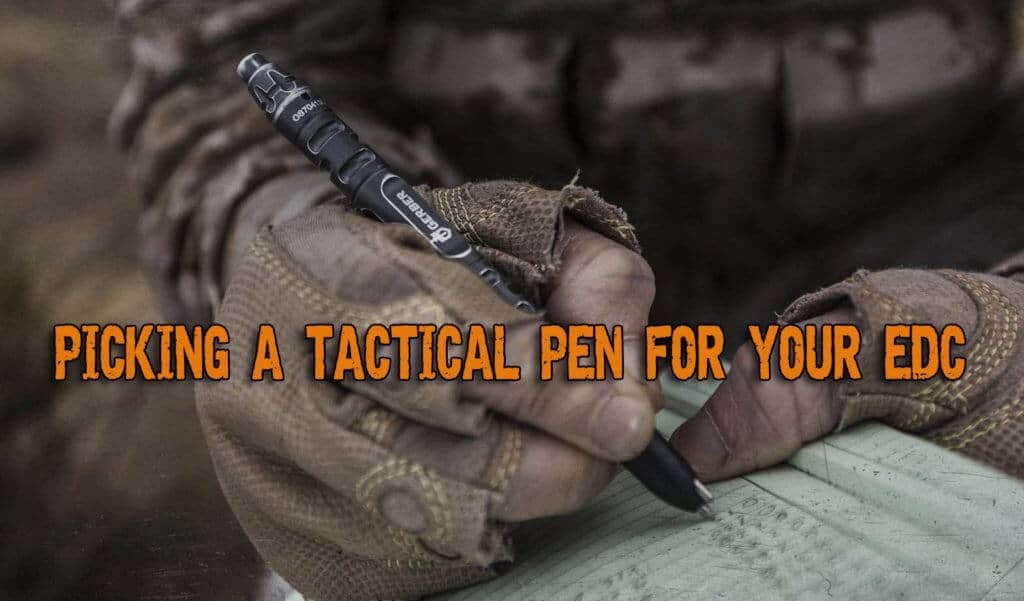 In some states, the limitations regarding EDC tools will force you to improvise if you want to stay safe. Carrying a survival tool such as a tactical pen is a great addition to your EDC, but you have to carefully pick the one that’s right for you. It may seem a simple task, but the devil is in the details.

Every survivalist knows that you need to learn how to improvise a weapon from everyday objects to overpower your opponent. You may not always have a firearm in reach and you should be able to protect your life if you find yourself in a bad situation.

A few years ago, many knives companies realized the people are looking for some concealable tools that could be used for self-defense. This is how the tactical pen market developed and these companies are now offering this tactical option to the preparedness-minded public.

What is a tactical pen?

Some people may not be familiar with this tool while others have one or more tactical pens. Regardless, the case, let’s see what’s all the fuss over the tactical pen. First and foremost, such a pen is a writing instrument that you can use in your daily activity. Besides this, it also has one or more special survival purposes.

The tactical aspect of these types of pen comes from its construction. An all metal body with a flat or pointed end which is designed for striking an opponent. Through proper manipulation, the tactical pen can be used as an effective defensive tool.

A basic tactical pen should have an all-metal body with a flat end to rest your thumb and prevent it from slipping in your hand. It also needs to have a pointed end that can be used as a striking tool to hurt your attacker or shatter a car’s window if needed.

The tactical pen needs to be long enough with both ends extending at least half an inch past the edge of your closed hand. If that’s not the case, you might as well use your bare hands to fight the opponent.

As you probably suspect, tactical pens come in all size and shapes. There are three main categories to help us classify a tactical pen. As a general guide, you have to carefully inspect a pen before buying it. You need to avoid getting a cheap or inferior tactical pen if self-defense is your main concern.

The main categories for tactical pen classification are concealed use, on the go (or field) use and multiuse.

These pens are office-friendly to say so and they don’t look very tactical. A concealed use tactical pen looks like a pen you can usually find in any office supply store. You can use it at the office without worrying that someone will freak out.

They are inconspicuous and are perfect for every EDC. This future is the main thing you should keep in mind when organizing your EDC. If you’re a prepper or survivalist and you want to stay under the radar, using a covert tactical pen around others won’t put you out of place. These are not actually designed as tactical pens, but they do have the features of a tactical pen.

On the go use

These tactical pens stand out and they look exactly like what you would expect when saying the words “tactical pen”. The main colors of field use survival pens are flat black or dark gray. Having an all-metal body is mandatory for these pens and they provide good mass and heft.

A field uses tactical pen has grooves machined into the body or barrel to provide a good grip. You can be sure they won’t slide into your hand during a fight. This pen usually has pointed ends (usually both)designed specifically for striking or partial penetration.

Some pens have a cover that covers the pen point while others have a pull or screw off mechanism to reveal the pen point. Even the point can be used for striking. They have a longer size compared to your office pens and will stick out of your pocket.

Since these pens are robust and made from hard metals, they can be used in the field without problems. You can use them to make stakes for your tent, you can use them to dig a hole and even to pry open various lids. Just imagine having a metal rod in your pocket and you can use your tactical pen in the same way.

This is my favorite category when it comes to owning a tactical pen because I like to have options. A backup to my backup plan type of person and I usually pick gear following this “obsession” of mine. A multiuse tactical pen is designed to incorporate additional features besides the two main ones: writing and fighting.

Some pens have a led light incorporated while others have a small blade and even handcuff keys. Others are designed to also become a glass-breaker or have survival gear incorporated. To put it simply, a multiuse tactical pen is survival hybrid tool that helps you take notes. They are a great choice for a survivalist’s EDC, especially if you like to have options.

Keep this in mind when buying  a tactical pen To sum it up, here are the desirable tactical pen features you should look for, but also the things you need to avoid.

I cannot vouch for other pens, but I can recommend the ones I own after testing them firsthand. I have multiple pens and my wife also carries one in her purse.  Here is what I recommend

I have various tactical pens from Uzi, but this is my favorite. I keep it in reach, in my car since it also has a glass breaker. It is actually a tactical pen by military pilots, Navy SEALs, SWAT, Marines, and First Responders. It is made from aircraft grade aluminum and it has a diamond thread grip to prevent slipping. You can carry it in your pocket or briefcase and it won’t draw too much attention.

It not only looks amazing, but it is surprisingly light-weight and ergonomic. This Uzi tactical pen is highly durable and can withstand the elements. The tactical use of the pen makes it a versatile tool – not just a pen.

This multiuse tool or tactical multiuse pen is ideal for your EDC if you need to have options. This is a 4 in 1 high-quality aluminum alloy tactical pen. It includes a Tungsten Steel Tip Glass Breaker, a LED Flashlight, but also Bottle Opener with a flat head screwdriver.

Press the hidden switch to turn on the LED flashlight. It will provide enough bright lighting with 12-lumen intensity can last for up to 10 hours. This tactical pen will help you find your way in the darkness and it can also help you break thick glass in case of an emergency if you get stuck in your car. The grip part of the pen has diamond thread design to ensure a firm grip when you’re fighting off attackers. This pen is perfect for outdoorsmen and everyone who loves camping

My wife has a Gerber Impromptu Tactical Pen and her two main reasons for choosing one were the materials use for the pen and the glass-breaker integration. It has a rugged, machined steel body and stainless steel pocket clip. However, it’s a little more expensive then my tactical pens. Just a heads up.

There are many tactical pens available on the market and it seems that every year, new models with more and more functions appear. In the end, the call is yours and you can pick the one you like. However, keep in mind that having options is always recommended. Pick one that can be used daily, but that can also save your behind during extreme circumstances.